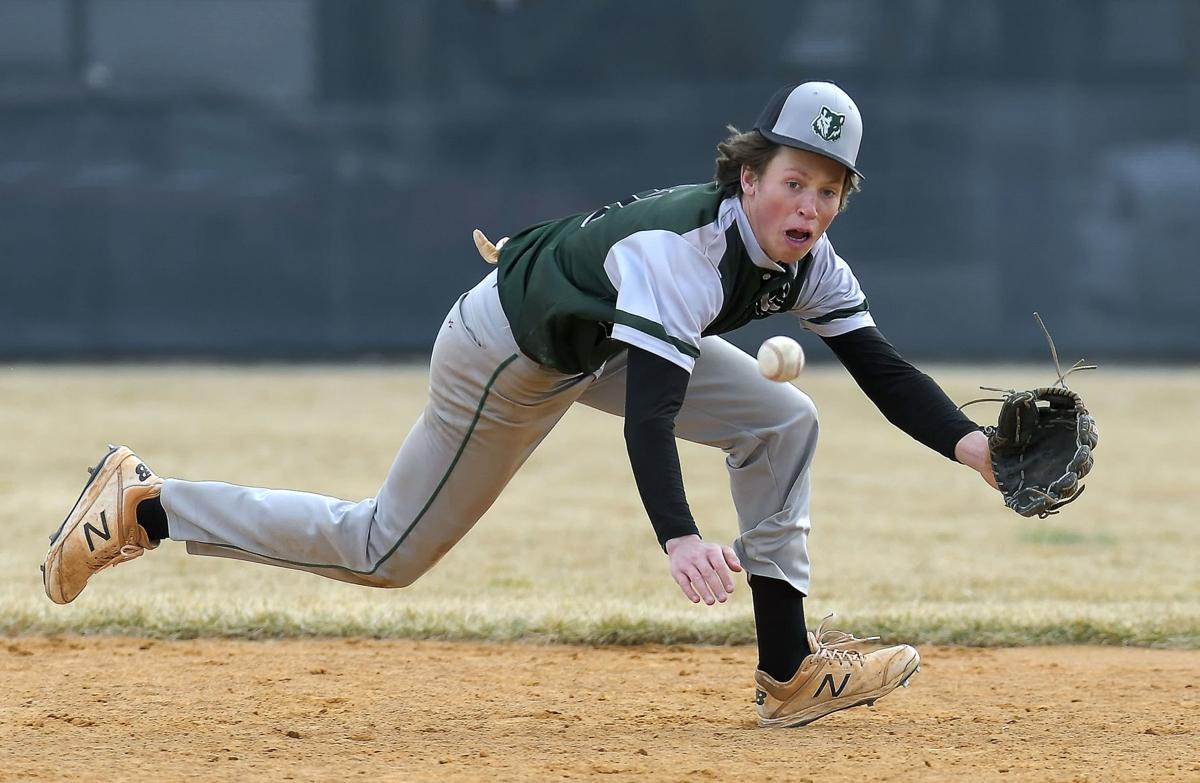 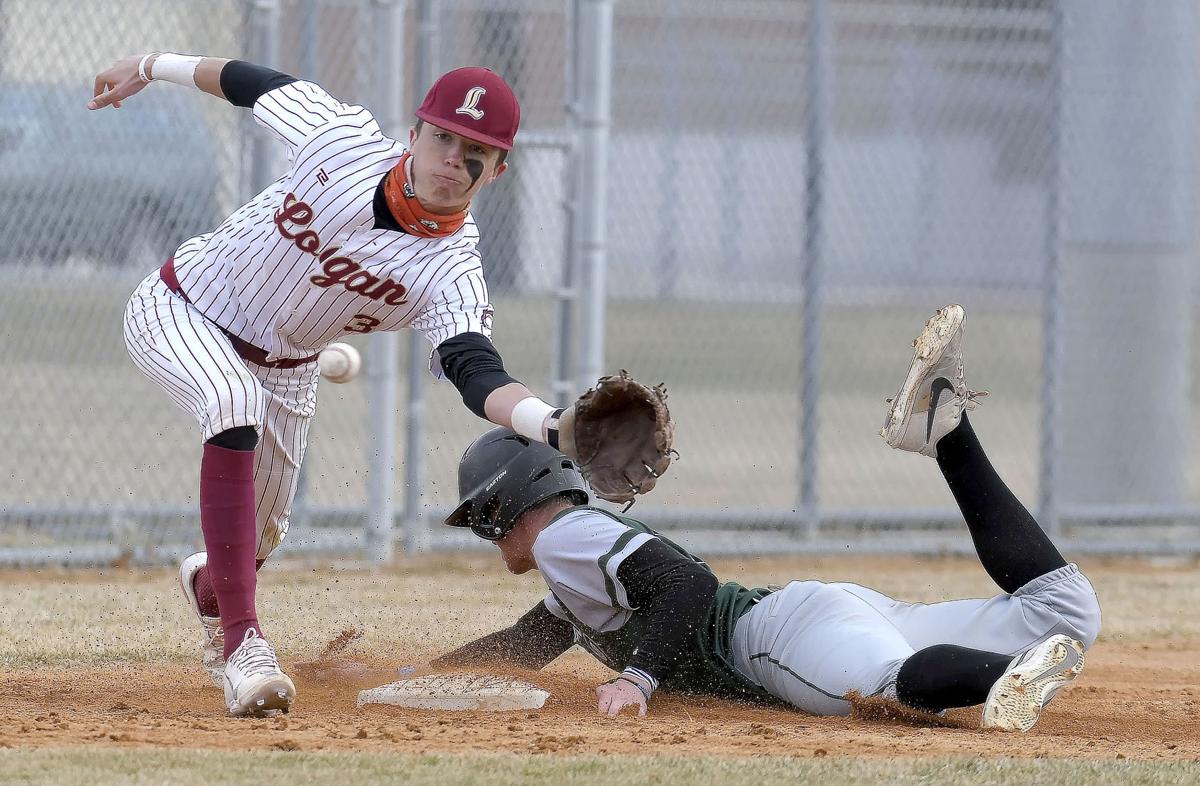 Green Canyon's Caden Stuart slides into third base as Logan's Kody Kirk fields the ball on Tuesday in Logan.

Green Canyon's Caden Stuart slides into third base as Logan's Kody Kirk fields the ball on Tuesday in Logan.

It was the kind of start to Region 11 play Green Canyon’s baseball team was hoping for.

The Wolves took the lead in the top of the first and never relinquished it en route to a 13-1 victory over Logan on Tuesday afternoon at Worthington Park. It was a relatively competitive game until Green Canyon went off for nine runs in the final two innings.

“We talked to the boys yesterday about coming out and making a statement, not just against Logan but to the region that Green Canyon’s a good ball club and when anybody plays us they’ve got to bring their best because we’re going to bring our best,” GC head coach Ryan Eborn said. “So it was kind of a statement win.”

The Wolves (8-2, 1-0) scored their first run on a defensive lapse by the Grizzlies and, unfortunately for the hosts, it was a sign of things to come. Logan (2-8, 0-1) committed eight errors Tuesday and the lion’s share of them were errant throws.

Logan pitcher Jake Egbert limited Green Canyon to one hit in each of the first two frames, but the visitors strung together four base knocks in a row in the top of the third to take control. Caleb Petersen belted a RBI double to deep center field to give the Wolves a 2-0 lead, Nick Bouck followed with a run-scoring single and Ryker Ericson came through with a sacrifice fly to give the visitors a 4-0 cushion.

“We started off a little bit slow, but coach just said have a better approach at the plate and that’s what we did,” Petersen said. “We started putting balls in play, they made errors and that’s really what you’ve got to do against a team like that.”

Green Canyon accumulated 13 hits in the contest and, to the satisfaction of Eborn, by eight different players. Alex Atkinson, Abe Olson, Petersen, Miles Matthews and Jaxon Berry all contributed with a pair of base knocks. Olson walked twice and scored twice, Petersen added a pair of walks and RBIs, Atkinson plated a pair of runs and drove in another, and Berry chipped in with two runs, as did Caden Stuart.

“We’ve been preaching quality at-bats all year long and we felt like one through nine today everybody for the most part was dialed in and putting good ADs together,” said Eborn, whose team did a good job of taking what Egbert gave them and hitting to the opposite field Tuesday. “... And when you string them together (like we did a couple times today) good things are going to happen.”

Green Canyon received another strong performance on the mound from Reece Hansen, who only allowed one unearned runs on three hits in six complete innings. The junior struck out four and plunked one.

“Just pound the zone and make the other team earn it, don’t give them anything for free, and Reece is pretty dang good at doing that,” Eborn said.

Hansen also made a couple of nice defensive plays for the Wolves, including one where he spearheaded a 1-6-3 inning ending double play.

The Wolves were very aggressive on the basepaths as they stole 10 bases. Nick Bouck led the way with three steals.

Logan capitalized on two Green Canyon errors to plate its lone run in the bottom of the fourth. Vincent Rohrer, Kody Kirk, Egbert and Michael Cabrera all singled for the Grizzlies.

Jack Fjedsted made an outstanding diving catch on the full extension in right field in the top of the second for the hosts, and also gunned out a GC baserunner at home later in the game.

Mountain Crest jumped out to an 8-0 lead over visiting Sky View after three innings and held on for a 10-8 win, while Ridgeline rallied past visiting Bear River, 7-3.

The Bobcats (2-6, 0-1) scored twice in the fifth inning and exploded for six runs the following frame to pull even at 8-8. The Mustangs (9-2, 1-0) bounced back with two runs in the home half of the sixth to prevail.

Kolmyn Fougler, Lance Welch and Braydon Schiess finished with two hits apiece for the Mustangs, who got two RBIs, one run, one hit and one walk from Nathan Rowley. Fougler also scored twice, walked once and drove in a run, while Schiess chipped in with one run, one RBI and one walk. Schiess doubled and teammate Caden Jones tripled.

Mountain Crest pitcher Andrew Nielsen shined in his four innings on the mound as he held Sky View to a pair of runs on five hits, fanned 10 and issued three free passes.

“Andrew pitched a great game and we hit the ball pretty good,” MC head coach Stephen Hansen said. “Proud to see the team not panic when Sky View made a comeback. We did what we needed to get a win.”

Cole Lundahl had a big day at the plate for the Bobcats, who finished with two more hits than the Mustangs, 10-8. Lundahl went 3 for 4 with three RBIs.

Cole Watterson contributed with two runs and hits, one RBI and one walk for Sky View, which got two RBIs and walks from Tate Bagley, two runs, one hit, one walk and one RBI from Taydem Neal, and a double from Derek Anthony.

Meanwhile, Ridgeline (6-4, 1-0) put a six-spot on the scoreboard in the bottom of the sixth to complete the comeback against Bear River (4-5, 0-1). The Riverhawks plated those runs on four hits, two walks and two errors.

Jakob Astle came through with a solo homer in the bottom of the fifth for Ridgeline’s first run of the game. Jaden Harris, Braxton Gill and Jaxen Hollingsworth had two hits each for the Riverhawks, and Gill scored once and drove in a run.

Harris went the distance on the mound and limited the Bears to seven hits, while striking out six and plunking one.

“We came out a little flat today and gave up three runs on some errors and past balls,” RHS head coach Paul Bowler said. “We caught some momentum when Jake Astle hit a home run. Then we had some good at-bats and got on a roll, and scored six runs. Harris was great on the mound again, which always gives us a boost. Bear River is always tough and it was a good win for us.”

Green Canyon gutted out a 10-8 road win over Brighton and improved to 5-1 on the season.

Brandon Mueller scored three times for the Wolves, who got two goals from Ian Maughan and Tucker Sampson, and one goal apiece from Jake Lundin, Laker Sampson and Dusty Gasaway. Mason Anderson assisted on four of Green Canyon’s scores.

Logan (2-5) was also in action as it traveled to Weber and left with a 16-6 loss. Daxton Daniels netted four of the Grizzlies’ goals, Kyle Humphreys had a goal and an assist, and Ethan Davis also scored.

Ridgeline earned a hard-fought 8-7 road triumph over Mountain Crest in the region opener for both teams.

“(Mountain Crest) scored at the two-minute mark to make it a one-goal game, but we won the draw after the goal and maintained possession to kill the clock,” RHS head coach Aaron Quiggle said. “Our breakout player was sophomore Brooklyn McBride, who scored her first goals of the season and had a hat trick.”

Ellie Goins also scored three times for the Riverhawks (4-1), who got a goal apiece from Maddie Topham and Sydnee Seeholzer.

Kamrie Wilkinson led the Mustangs (1-4) with two goals, followed by