Green Canyon’s Jake Lundin (24) passes the ball down the field as a Ridgeline player defends on Friday in North Logan. 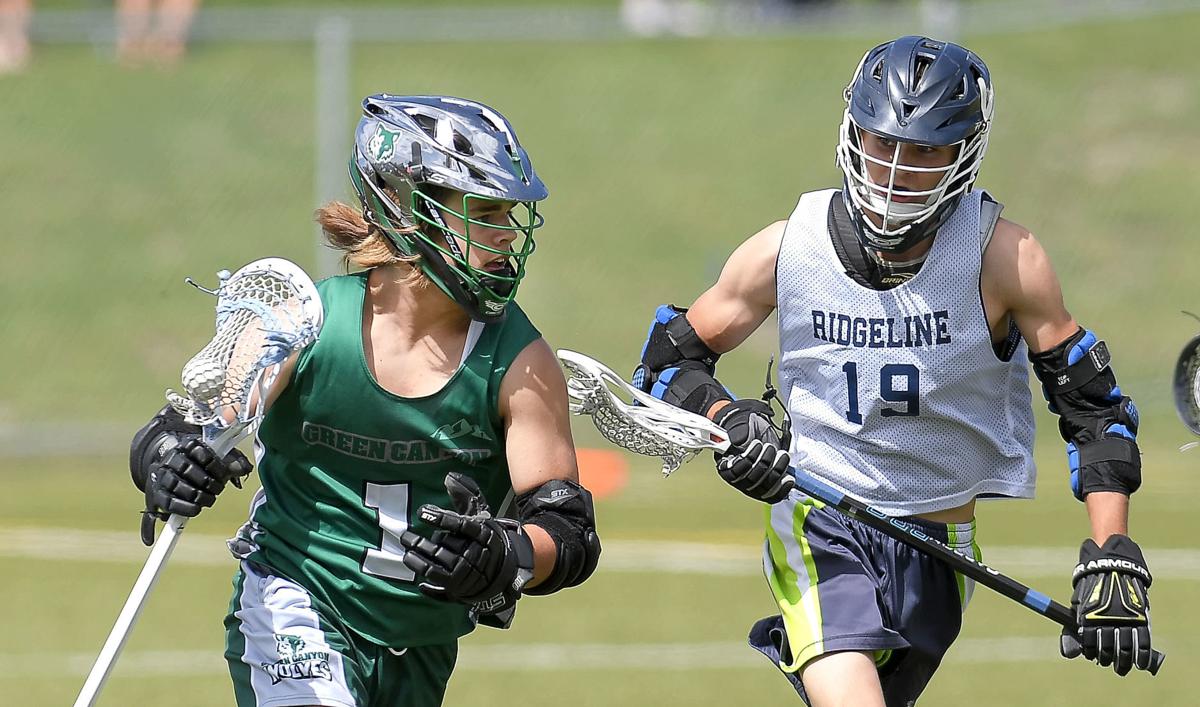 Green Canyon’s Dustin Gasaway (1) brings the ball down the field as a Ridgeline player defends on Friday in North Logan.

Green Canyon’s Jake Lundin (24) passes the ball down the field as a Ridgeline player defends on Friday in North Logan.

Green Canyon’s Dustin Gasaway (1) brings the ball down the field as a Ridgeline player defends on Friday in North Logan.

NORTH LOGAN — Nothing will ever quite make up for a season canceled due to a global pandemic, but several high school boys lacrosse players from Cache Valley received a little bit of closure last weekend.

Athletes from Sky View, Green Canyon, Logan, Ridgeline, Mountain Crest, Bear River and Box Elder were represented at a two-day tournament that concluded last Saturday afternoon at Elk Ridge Park. It was a club tournament as it was independent from the various schools.

It was a memorable two days for tournament host Green Canyon, which captured the varsity and JV titles. The Wolves went 6-0 in varsity competition, which culminated with a thrilling, come-from-behind 6-5 triumph over Box Elder in the championship game.

“You know, (losing our season was) a bummer,” said recent GC graduate Lucas Garrison, who was the captain of his prep team. “A lot of us seniors didn’t know if we were going to step on the field again, and so it does help to end on a good note and leave that legacy behind for the younger guys.”

The tournament was spearheaded by Green Canyon head coach Troy Oldham and Diana Cannell, who has been instrumental in the growth of lacrosse in the north end of the valley for several years.

Oldham was hopeful he could organize an event like this after Utah Gov. Gary Herbert announced the state was moving from “orange” to “yellow” status on May 14. Once the Beehive State moved to yellow, people were allowed to gather in groups of up to 50 and team sports could resume as long as the athletes were checked for COVID-19 symptoms first.

Once given the green light to hold a tournament, Oldham said “we pulled this together in about a week.” He contacted the coaches of all the teams in the region, “and then the coaches mobilized their teams.” The Mustangs didn’t field a squad, but some of their athletes played for the Riverhawks.

“Once we knew who could come, we just started scheduling it, and we had a few hiccups,” Oldham said. “We thought we had a couple of other JV teams, but then when some teams got the full count, they didn’t have enough JV players, so we made some adjustments.”

Most of Green Canyon’s normal varsity players were able to compete last weekend, and the results could be seen. The Wolves had high expectations after losing only two seniors from their 13-3 team from a year ago, but were only able to play once this spring before play was halted.

“It’s great because we gave the seniors a chance to be competitive, and yeah it’s fun to say, ‘hey, we won the tournament,’ but the most important thing — and I’m super sincere about this — is that the seniors got to play and this team that we knew was very special, we got to have them on the turf for consecutive games and to really see how they could handle ... winning and being behind,” Oldham said. “And they performed flawlessly. ... They came out to play and they showed all of those qualities we knew that they had.”

Games at this tournament were shorter than typical club and high school contests as they consisted of four 10-minute quarters, with a running clock — the exception being the final two minutes of the fourth quarter. Halftimes were shortened to eight minutes and each team was only allowed one two-minute timeout an outing.

“Box Elder’s a really good team,” Garrison said. “They’ve got some studs and it can be hard to keep up sometimes, but we just dug deep and we found the grit and determination to pull through. ... It’s always been a (good) rivalry between us and Box Elder.”

The Bees jumped out to a 4-2 halftime advantage over the Wolves and took a 5-4 lead into the final quarter. Fourth-quarter goals by Dustin Gasaway and James Robinson lifted Green Canyon to the title.

Lundin scored in every game for his team and also excelled as a facilitator and on the defensive end of the field.

“He had an incredible tournament,” Oldham said.

Green Canyon netted at least six goals in every game and never conceded more than six. Additionally, the Wolves allowed four goals or fewer in three of their contests.

“It’s one of those things where it seems cliché, but championships and great wins come off of strong defense, and our defense when we needed it was awesome,” Oldham said. “... Across the board, our defense was just solid, rock solid.”

Oldham was especially pleased with the defensive efforts of Danny Sanchez, Garrison and Lundin, plus first-year varsity competitors Braxton Bushman and Zack Dougal, “who just played lights out.” The Wolves also received clutch performances from their netminders.

“Andrew Needham, who’s our senior goalie, had just some amazing stops at some really key junctions of the game,” said Oldham, who raved about the sportsmanship displayed by athletes from all of the teams. “... And we also were able to rotate in our backup quite a bit, Peyton Johnson, who’s going to be a phenomenal goalie in the future.”

“Everyone on the team that came did amazing,” said Mann, who was missing at least half of his normal varsity roster. “Playing with only around two-three subs with 90 degree days, everyone stepped up, played well and gave it their all in every game.”

Logan didn’t win any games at the tourney, but was very competitive against Sky View (4-3) and Ridgeline (8-6), and scored every time in took the field.

The Grizzlies were led offensively by Trevor Bodily, Daxton Daniels, James Thornley and Kyle Humphreys, who “was our unsung offensive hero, feeding shooters and winning the ground balls a lot on the offensive side of the ball,” LHS head coach Bo Olsen.

Olsen also singled out the efforts of Malakye Lindsay, Ethan Davis, Cole Hoglund and Jordan Brandon, “our senior goalie, (who) was stuffing perimeter shots all Saturday with ease and clearing the ball well,” Olsen said.

About 85 percent of Logan’s varsity lineup was able to compete, “with some kids missing a game or two,” Olsen said.

In order to be compliant with the health guidelines constituted by the state, health department and North Logan City, several stipulations were put into effect. Here were some of them:

• Every player was responsible for his own water.

• Every player turned in a participation waiver, which was signed by parents, and had his temperature checked before being allowed on the field on Day 1.

• Players didn’t shake hands before or after games, although elbow bumps were allowed.

• There were no face-offs. Instead teams alternated possession after a goal.

• The maximum team size allowed on the field was 23, and that included coaches.

• Spectators were asked to follow social distancing guidelines, with family groups allowed to be together.

• Teams were asked to leave the field immediately following their games.