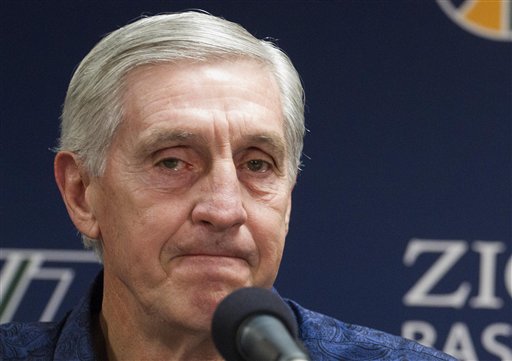 Utah Jazz Jerry Sloan announces his resignation during an NBA basketball news conference in Salt Lake City, Utah, Thursday, Feb. 10, 2011. Sloan stepped down Thursday after 23 seasons and 1,127 wins as head coach of the Jazz. Longtime assistant Phil Johnson, who also was in his 23rd season with the Jazz, also resigned. (AP Photo/Jim Urquhart) 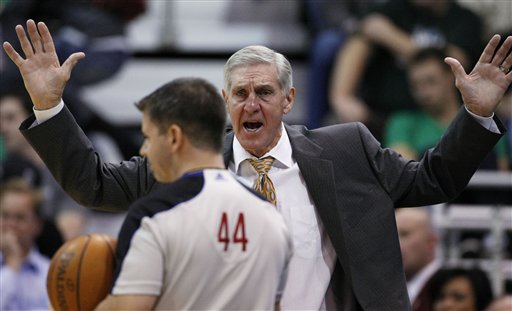 Utah Jazz head coach Jerry Sloan, right, argues a call made by official Eli Roe, left, during the second half of an NBA basketball game against the New York Knicks in Salt Lake City, Wednesday Jan. 12, 2011. The Jazz defeated the Knicks 131-125. (AP Photo/Colin E Braley)
1 of 2

Utah Jazz Jerry Sloan announces his resignation during an NBA basketball news conference in Salt Lake City, Utah, Thursday, Feb. 10, 2011. Sloan stepped down Thursday after 23 seasons and 1,127 wins as head coach of the Jazz. Longtime assistant Phil Johnson, who also was in his 23rd season with the Jazz, also resigned. (AP Photo/Jim Urquhart)

SALT LAKE CITY (AP) — After 23 seasons, Hall of Fame coach Jerry Sloan had only one bit of advice for successor Ty Corbin.

"Be yourself," Sloan said Thursday after announcing he was stepping down after 1,127 wins the Jazz because he didn't have the energy any more.

Corbin, a former Jazz player, already began meeting with players and will coach his first game Friday night against the Phoenix Suns.

Around the league, the shock remained.

"I'm too shocked to have a reaction," Boston Celtics coach Doc Rivers said. "It caught us all off guard. ... He's been there like this rock and all of a sudden the rock is gone. It's like your franchise moved or something. I don't know. It's just strange."

Sloan was the longest tenured coach in any of the four major sports. His resignation came just two weeks after the second-longest tenured professional coach, Jeff Fisher, parted ways with the Tennessee Titans after a 6-10 season.

"I had a feeling this time was the time to move on," an emotional Sloan said during a Thursday afternoon news conference. "(That's) a long time to be in one organization. Again, I've been blessed. Today is a new day. When I get this over with, I'll feel better. My time is up and it's time to move on."

"I came with him and I'll leave with him," the 69-year-old Johnson said Thursday.

The two men agreed to sleep on their decisions Wednesday night at the request of team owners and O'Connor, who said he "begged" Sloan not to resign.

Nothing changed in the morning and Sloan reported sleeping better than he has in six weeks. Asked what he'll do now, he didn't know, and said he expected to be a "dizzy duck" for a while.

"I want to make it clear that nobody pushed Jerry or Phil out," Miller said. "I loved and respected Jerry for as long as I can remember... I will miss him but benefit from the things he taught me for the rest of my life."

Team officials made it clear that Corbin is not an interim coach.

O'Connor also called false reports that star guard Deron Williams told the team to choose between him or Sloan.

"That's not fair to Deron," O'Connor said. "That puts him in such a bad light. Whoever started that rumor is either uninformed or a liar. I would say the latter."

Williams told 1320-KFAN radio that he and Sloan clashed at halftime Wednesday but insisted there is no truth to the rumors that he forced the Hall of Fame coach out.

"We had a disagreement," Williams told the station. "I've seen him have worse ones with other players. Jerry's very fiery. I am, too. Sometimes we clash on things."

Willams said he and Sloan are both "stubborn" and clashed because they both wanted to win.

"Not many come into this league and can play for a Hall of Fame coach their first six years," Williams told the station. "I got a chance to learn from the best. We won a lot of basketball games because of coach Sloan."

Now it's up to 48-year-old Corbin to win some more, starting Friday at home against the Phoenix Suns.

Jazz broadcaster Thurl Bailey, who was traded to Minnesota from Utah in 1991 in exchange for Corbin, called Thursday a "sad day" for the state because such a legend stepped down. But he also was pleased for Corbin, the team's first black coach.

Corbin was offered the job very quickly Thursday morning, and called it a "bittersweet" moment. Sloan said he had not talked to any players, but Corbin was able to sit down with Williams before the press conference.

"While it's a great opportunity for me, it's a bitter moment for me because I will miss these guys a lot," said Corbin, in his seventh year as a Jazz assistant and a former Jazz small forward.

The moves came on the heels of an emotional 91-86 loss Wednesday night to the Chicago Bulls, Utah's 10th in 14 games.

But Sloan, the longest-tenured coach in the four major professional sports, insisted that wasn't the final straw.

But he hinted after the game that something was in the works after delaying his postgame news conference more than 30 minutes.

"I'll be 69 years old next month," Sloan said. "I'm not as lively as I used to be. There's no question losses are very difficult to handle the older you get. When I was younger, I thought I could handle anything, but they were a little more difficult when you get older

Sloan just recently signed a one-year contract extension to carry him through the 2011-12 season, but he also indicated that he would not make anything official until after the current season.

The Jazz started 15-5 but fell to 31-23 after the loss to Chicago, the only other team Sloan has coached (he was 94-121 in nearly three seasons with the Bulls). The Chicago loss was the third straight at home, where the Jazz are only 17-11 this season.

Though Sloan has been with the Jazz since 1983, first as a scout, he knows how tenuous professional sports can be.

Even before Wednesday's game he made that clear.

He has made a habit of conducting his pre-game news conferences next to a large plastic garbage can in the concourse at EnergySolutions Arena rather than from behind a podium.

"You never know when you might be in it," he quipped Wednesday. "It's why I stand here. You take what you get."

Sloan began working for the Jazz as a scout in 1983, became assistant to coach Frank Layden on Nov. 19, 1984, and was named the sixth coach in franchise history on Dec. 9, 1988, when Layden resigned.

"Few people have epitomized all the positives of team sports more than Jerry Sloan," NBA Commissioner David Stern said in a statement. "A basketball lifer, Jerry was as relentless in his will to win on the sidelines for the Utah Jazz as he was as an All-Star guard for the Chicago Bulls. In over two decades as a coach, he taught his players that nothing was more important than the team. His most impressive qualities were his leadership and his extraordinary ability to encourage his players to subjugate their individual games for the benefit of the whole."

While he has headed the Jazz, there have been 245 coaching changes around the league — 13 alone by the Los Angeles Clippers, and five current NBA teams (Charlotte, Memphis, Toronto, Orlando and Minnesota) did not even exist when Sloan took the helm in Utah.

Team owner Gail Miller called it "the end to an amazing era."

Sloan also is one of only three coaches in NBA history with 15-plus consecutive seasons with a winning record. Pat Riley and Phil Jackson, both with 19, are the others.

As a player with the Bulls, Sloan averaged 14.0 points, 7.5 rebounds and 2.5 assists in 755 games played over 11 NBA seasons. Nicknamed "The Original Bull" because he was selected in the 1966 Expansion Draft, Sloan was a two-time NBA All-Star (1967, 1969) known for his toughness and grit. He was the only player in NBA history to average 7-plus rebounds and 2-plus steals for his career.

Sloan recorded two triple-doubles in his career. A knee injury prematurely ended his career in 1976.