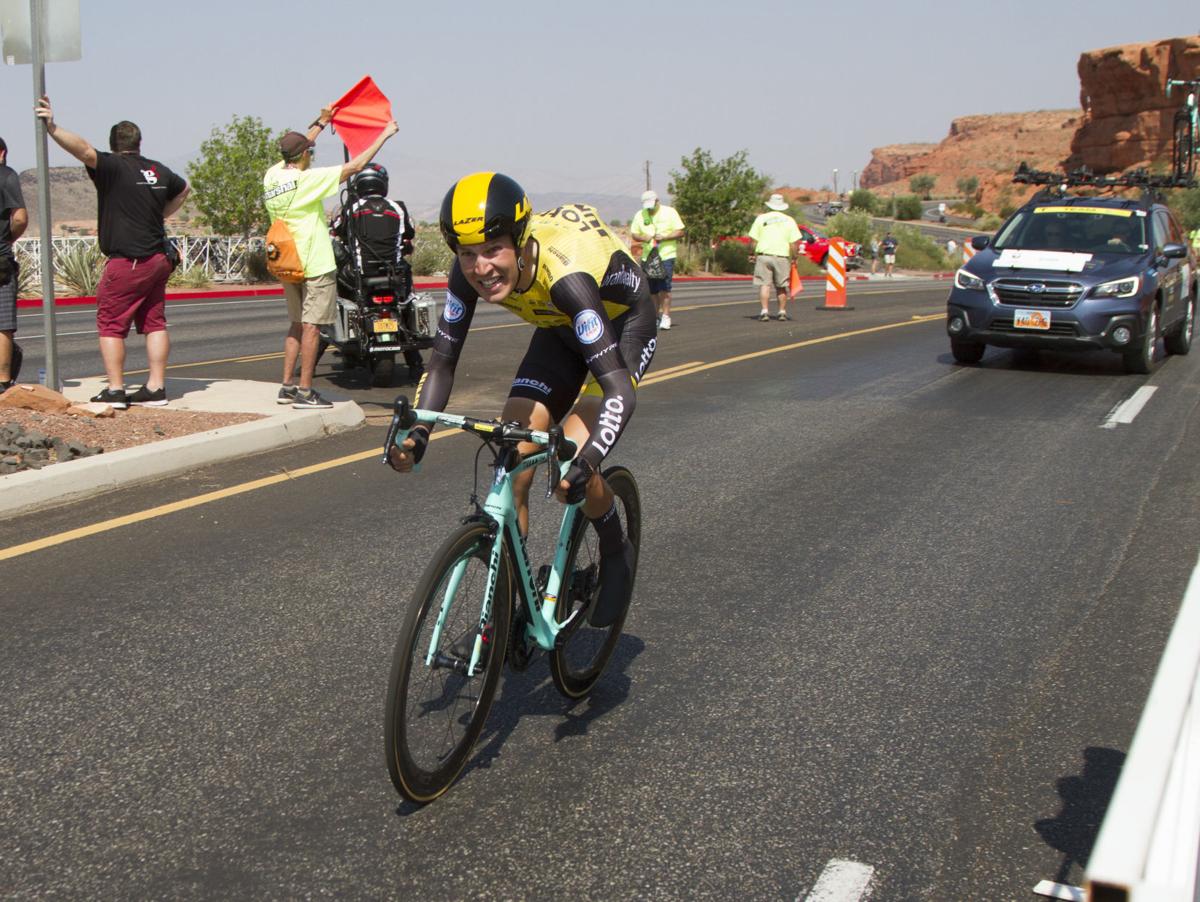 A cyclist competes during the Prologue at the start of the Tour of Utah Monday in St. George. 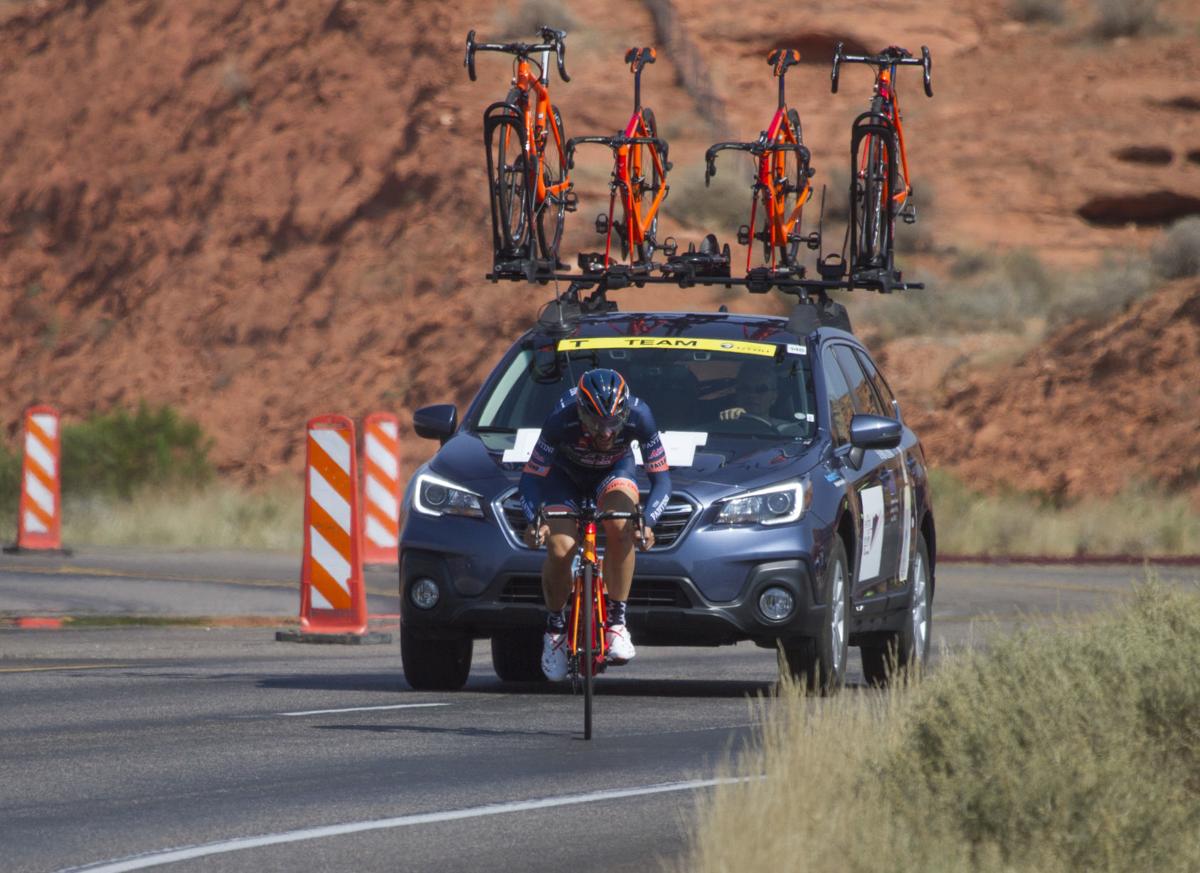 A cyclist makes his way up a climb during the Prologue on the first day of the Tour of Utah Monday in St. George.

A cyclist competes during the Prologue at the start of the Tour of Utah Monday in St. George.

A cyclist makes his way up a climb during the Prologue on the first day of the Tour of Utah Monday in St. George.

ST. GEORGE — American Tejay van Garderen was the fastest man with a time of 6 minutes, 27 seconds, leading a BMC Racing Team sweep of the podium in Monday’s Prologue at the 2018 Larry H. Miller Tour of Utah.

“I love Utah, I have a long history here. This was my first professional victory in 2011 in the TT (Time Trial) at the Tour of Utah,” said van Garderen, who comes off one rest week after racing the Tour de France.

He will wear the Larry H. Miller Dealerships Leader’s jersey on Tuesday. Van Garderen finished fourth in the opening Prologue in 2011, which was held in Park City. Later that week he won the ITT on Stage 3 in Tooele.

“I just came here to have some fun, keep the body rolling,” van Garderen said. “I told myself if there is a chance for a result, I’ll take it and today was a great opportunity for that.”

Reigning U.S. Pro Individual Time Trial champion Joe Rosskopf finished four seconds back in second place. Tom Bohli, who sat in the hot seat for most of the day, finished in third, six seconds off the pace.

“It was a really, really brutal prologue. I was hoping I could win it today,” said Bohli, who is a two-time U23 silver medalist in the time trial and a world champion on the track. “But then as Joey beat me, my second reaction was ‘Yeah, it’s Joey’. First of all I like that guy, he’s a good mate and it’s BMC. (It’s) good for us and good for him. As Tejay beat us, winning the Prologue today, showed that he is in really good shape and he can go for the win. It gives us good confidence.”

Surrounded by inspiring views of the Red Hills Desert Garden at Pioneer Park on the northern cliffs above downtown St. George, van Garderen bested 116 other riders on the opening day of racing for the week-long stage race.

Pacing was key on the out-and-back 3.3-mile (5.3 kilometer) course, where temperatures soared above 100 degrees. The riders started with a mellow climb for the first two kilometers and continued with a short downhill to the turnaround.

“We started out uphill. The gradient was, I think, higher than people expected, or what it looked like,” van Garderen explained. “So you had to overpace on the way out, and then you’re basically screaming at 75k (kilometers) an hour all the way to the finish line. You don’t want to blow up, but at the same time gauge your efforts well.”

A total of 36 riders are separated by 20 seconds at the top of the standings, making for an exciting opening to the 14th edition of the Larry H. Miller Tour of Utah.

Fifth on the stage, Pascal Eenkhoom of Team LottoNL-Jumbo was awarded the Larry H. Miller Dealerships Most Aggressive Rider jersey. Rosskopf claimed the Utah Sports Commission Sprint jersey and Bohli was awarded the Utah Office of Tourism King of the Mountain jersey.

Joe Dombrowski of EF Education First-Drapac p/b Cannondale, the overall winner of the 2015 Tour of Utah, is 13 seconds back in 12th place. Defending champion Rob Britton of Rally Cycling is in 29th place, 18 seconds down.

True to its nickname as “America’s Toughest Stage Race,” the 2018 Larry H. Miller Tour of Utah will dish out 548 miles of racing and 43,780 feet of elevation gain over the week of competition. The Tour of Utah began with 17 professional teams, representing 20 countries.

Stage 1 returns to Cedar City for a fourth time on Tuesday. The 101-mile (162.5 km) route includes 8,950 feet of elevation gain. It also features the highest climb of the week, passing Cedar Breaks National Monument at 10,600 feet.

The course is similar to the one used in 2016, but with a new circuit finish in downtown Cedar City. The first Utah Sports Commission Sprint line will be contested in Parowan, then hit a Category 1 climb at the top of Parowan Canyon at the ski resort town of Brian Head. This ascent climbs 4,500 vertical feet in 15 miles, with some sections challenging riders with a 15 percent gradient.

The Tour of Utah is free to all spectators. The Tour of Utah remains a 2.HC-rated stage race on the UCI America Tour, making it one of the premier events for professional cycling teams in North America. It is also one of the prominent road cycling events that is also part of USA Cycling’s Pro Road Tour.