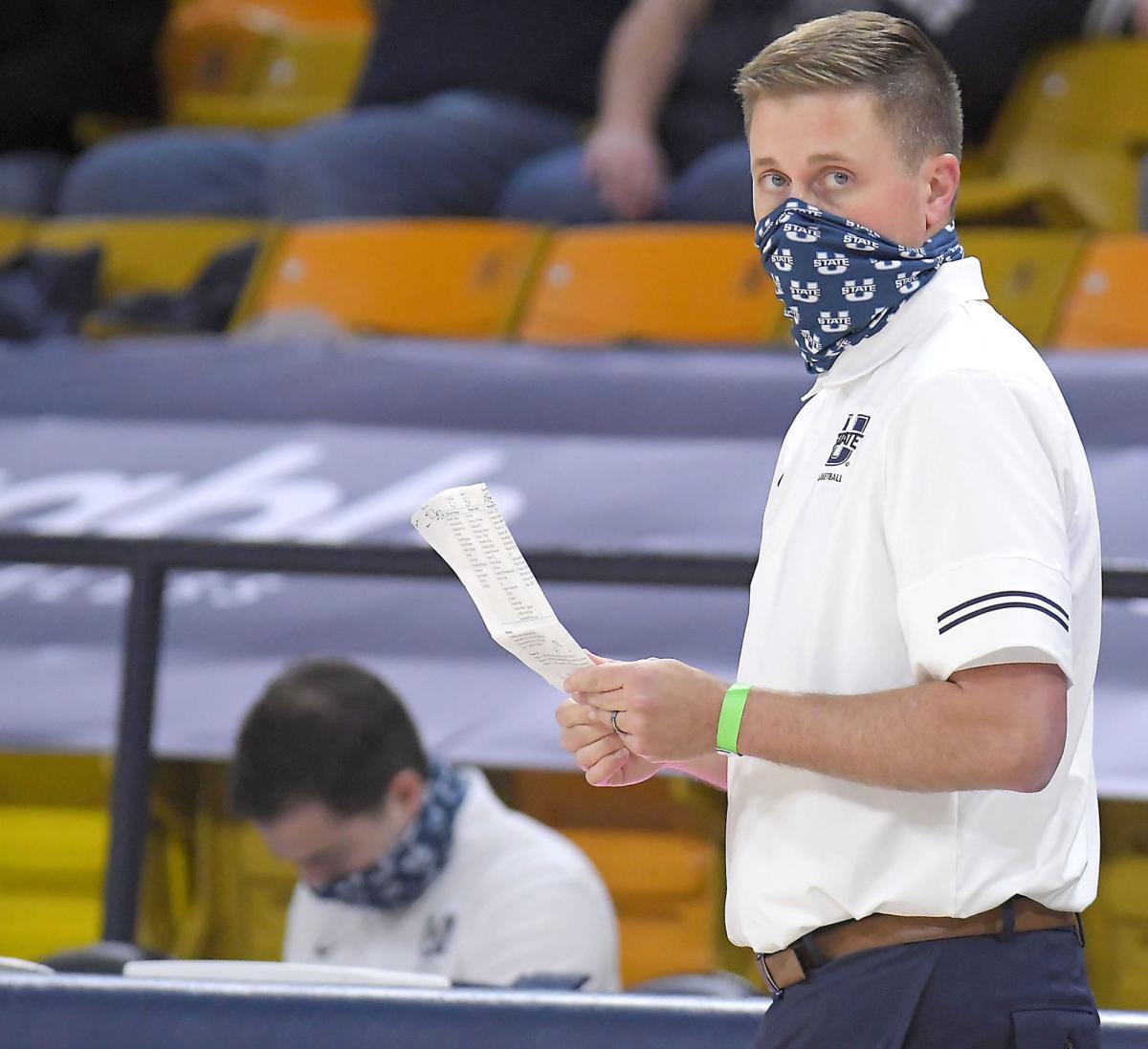 Assistant Eric Peterson coaches the Aggie men’s basketball team against BYU last week in the Spectrum. Utah State has announced that the game against Weber State scheduled for Saturday has been cancelled because of COVID-19. 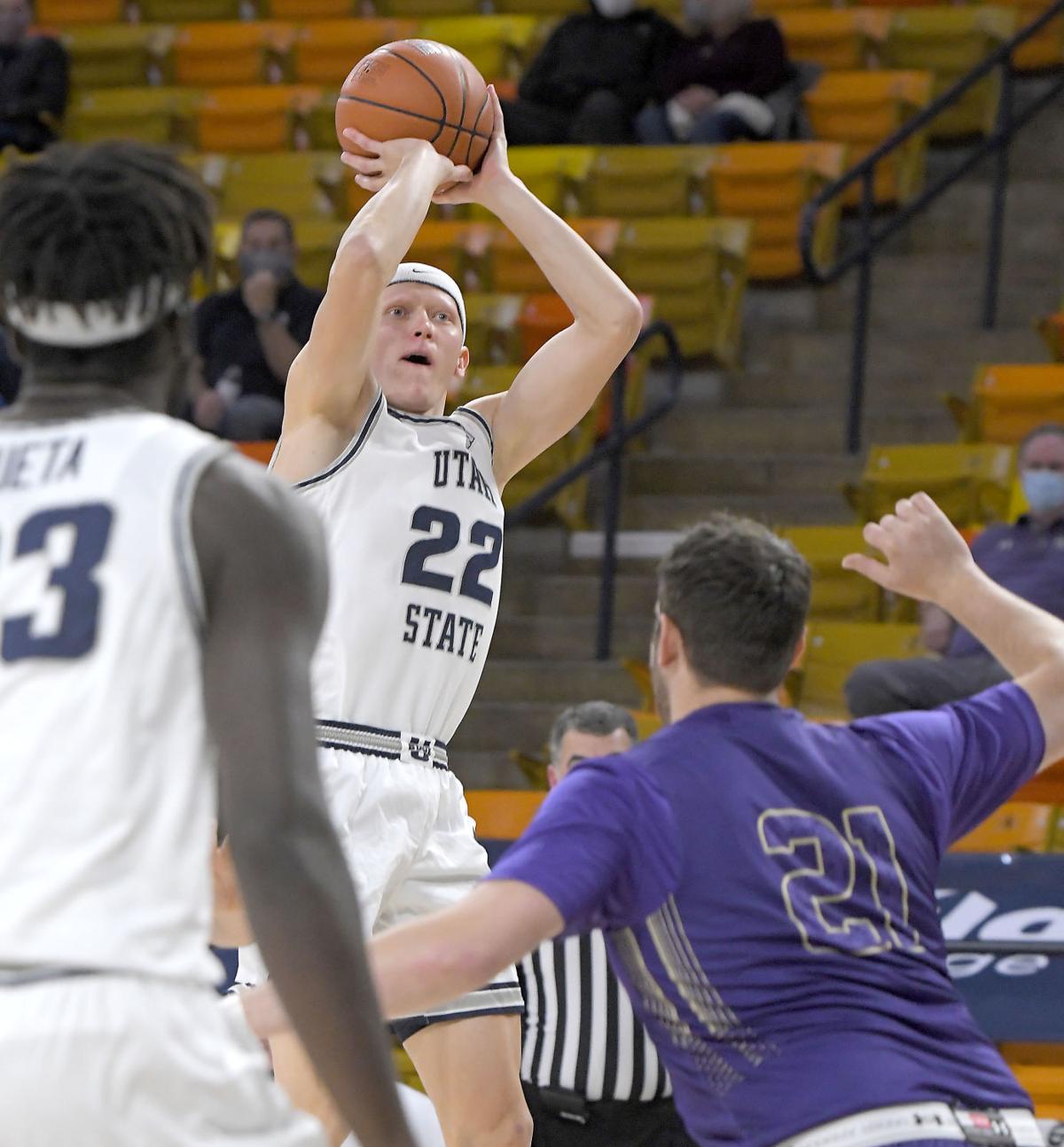 Utah State guard Brock Miller takes a shot against College of Idaho on Tuesday. Utah State has announced that the game against Weber State scheduled for Saturday has been cancelled because of COVID-19.

Assistant Eric Peterson coaches the Aggie men’s basketball team against BYU last week in the Spectrum. Utah State has announced that the game against Weber State scheduled for Saturday has been cancelled because of COVID-19.

Utah State guard Brock Miller takes a shot against College of Idaho on Tuesday. Utah State has announced that the game against Weber State scheduled for Saturday has been cancelled because of COVID-19.

The Aggie coach predicted there would be games called off and teams would play short handed because of COVID. Little did he know that less than a month into the season his team would be dealing with both of those scenarios.

It was announced Thursday afternoon that USU’s game at Weber State on Saturday was off. The short press release stated: “Utah State men’s basketball’s contest at Weber State on Saturday afternoon has been canceled, due to positive COVID-19 results at Utah State in accordance to NCAA, state and university COVID-19 protocols. In addition, the Aggies will be pausing full team activities.”

The Aggies have been dealing with COVID since the summer with athletes and members of the coaching staff testing positive. But when the season began on Nov. 25, USU was at full strength.

Last week that changed when Smith tested positive despite being safe and trying to live in a bubble as much as possible since the season began. Smith missed the BYU game last Saturday and the game against the College of Idaho this past Tuesday. He was expecting to return to the bench against Weber State.

Smith had no symptoms and in two Zoom interviews since going into quarantine was his usual, energetic self. He said he had energy and didn’t feel sick at all. The coach took a second test to make sure, and it came back positive.

Then there were four Aggies missing for Tuesday night’s game. USU was without junior guard Marco Anthony, junior center Kuba Karwowski, freshmen guards Max Shulga and Zahar Vedischev. Anthony had started the first four games and was averaging 13.8 points and 4.8 rebounds a game.

“I don’t know how much I can say,” said USU assistant coach Eric Peterson, who is filling in Smith. “Without giving specifics, we’re going through medical protocols to ensure the safety of our guys. That’s in accordance with Utah State, the Mountain West and the NCAA.”

Peterson made that statement after the game when asked about the four missing Aggies.

The Aggies and Wildcats are trying to figure out another date that would work to schedule a game this season between the in-state rivals. Weber State was able to find another opponent for this weekend and will face Boise State on Sunday.

USU may lose more than just the Weber State game. The Aggies are scheduled to host Dixie State on Tuesday in the Dee Glen Smith Spectrum. But with the team being shut down from any activities, that game does not look possible.

The athletic department at USU stated: “More information on that game (Dixie State) will be forthcoming.”

The Aggies are trying to work out a deal to move the Dixie State game to later in the week, but the Trailblazers are scheduled to play at Southern Utah on Thursday.

The Dixie State game was the lone contest on the schedule USU had for next week. The Aggies are supposed to begin Mountain West Conference play the following week with a two-game series against San Jose State on Dec. 21 (Monday) and Dec. 23 (Wednesday) in Logan. The Spartans had their first three games canceled and finally opened the season Wednesday night with a 87-79 win against Fresno Pacific in Santa Cruz, California.

The Aggies game at Air Force on Thursday, Dec. 31, will appear on CBS Sports Network. This was announced by the Mountain West Conference Friday afternoon.

The complete television package for the league games will be announced soon.