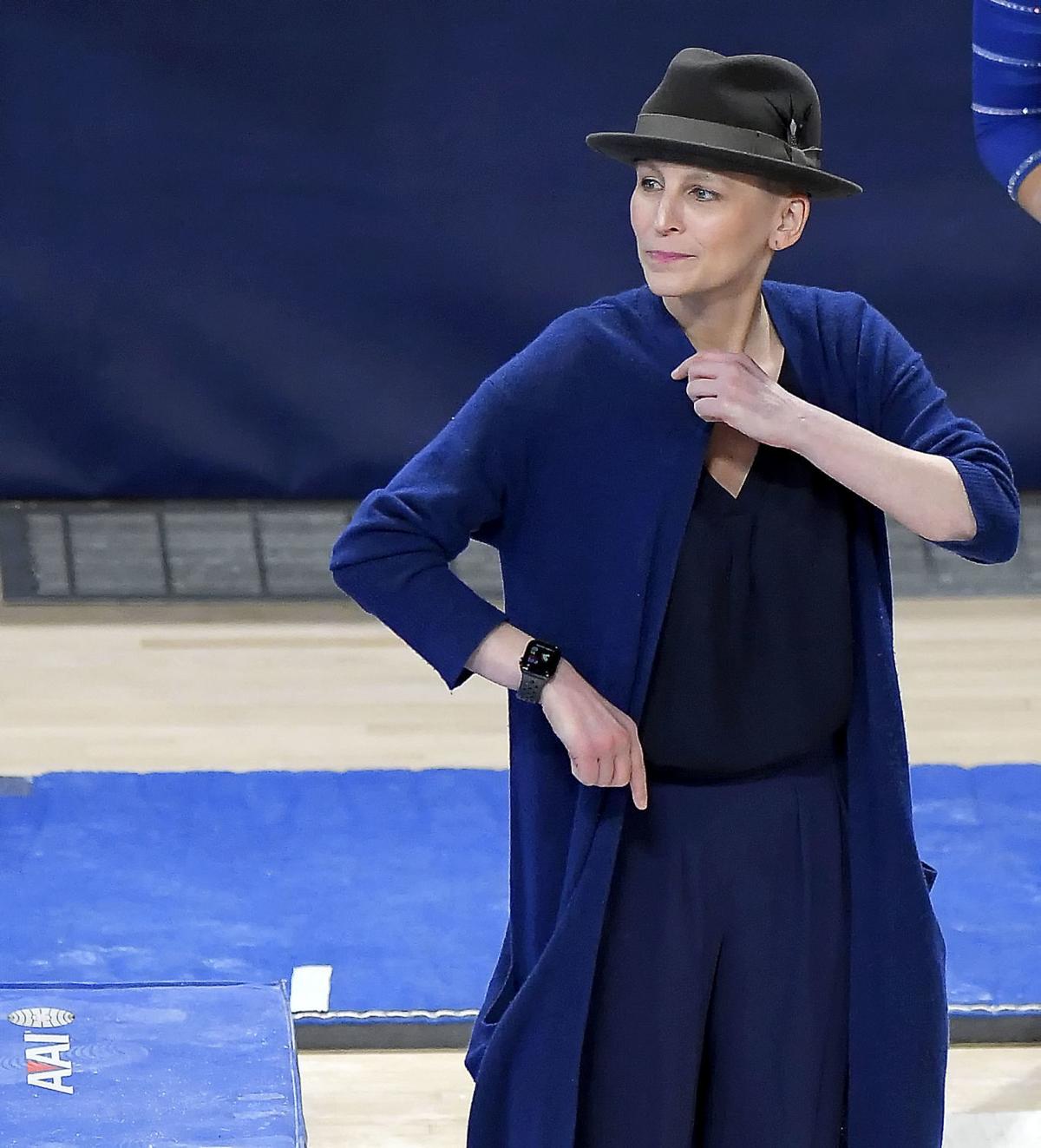 USU gymnastics coach Amy Smith watches as a gymnast performs on the beam against Boise State in Feb. 2020. 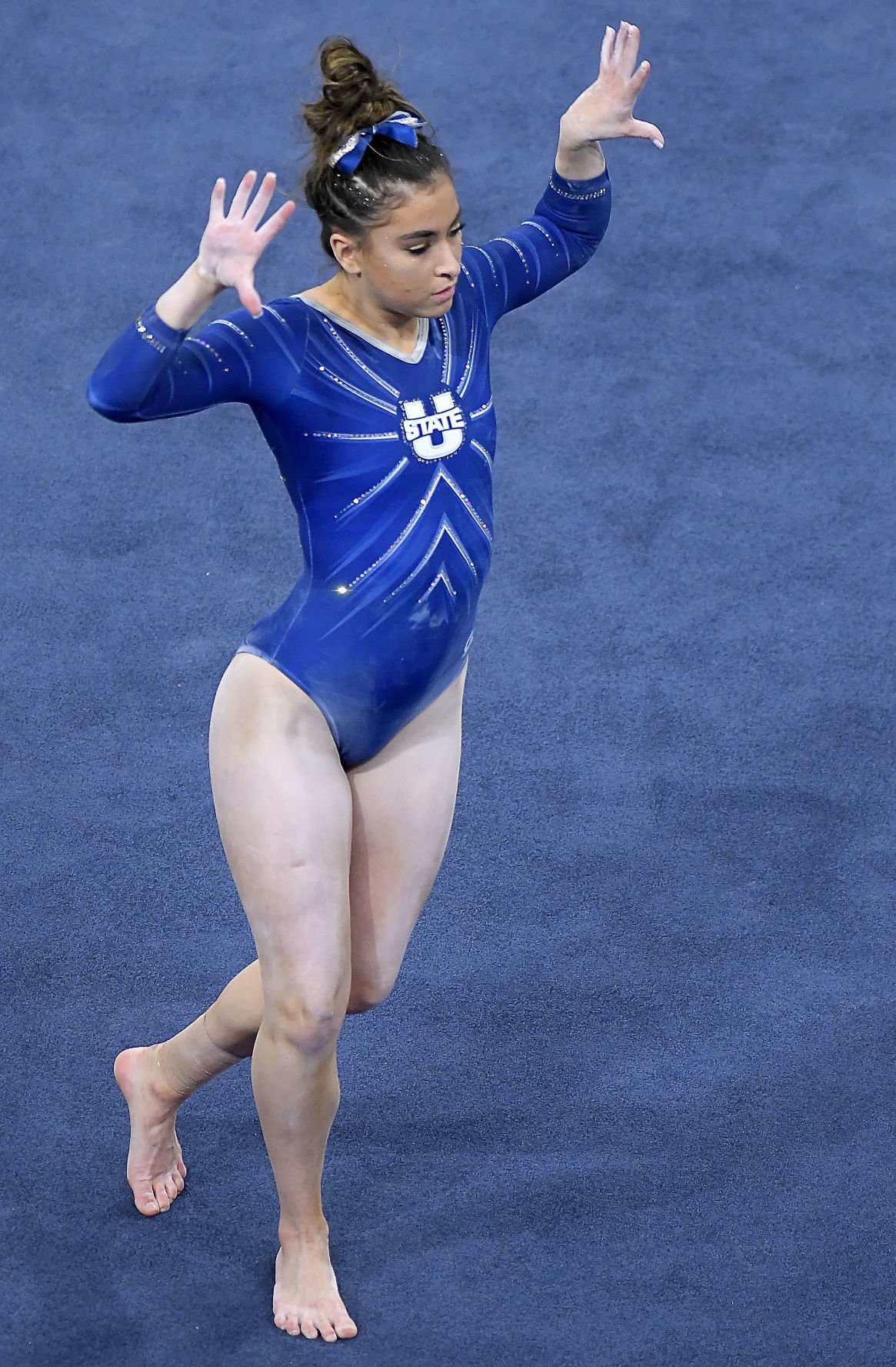 USU gymnastics coach Amy Smith watches as a gymnast performs on the beam against Boise State in Feb. 2020.

After one of their most successful seasons in school history, the Aggies made it a clean sweep of the end-of-the-year conference awards in gymnastics.

With the season cut short by a month, the Mountain Rim Gymnastics Conference (MRGC) announced its 2020 awards last week. The conference is made up of Utah State, Boise State, BYU and Southern Utah.

Aggie head coach Amy Smith was tabbed the Coach of the Year last Friday. She was joined by two of her athletes to complete the sweep. Junior Autumn DeHarde was named the MRGC Gymnast of the Year, and Sofi Sullivan was honored as the MRGC Freshman of the Year.

It is the first time in conference history that a team has swept all three awards.

DeHarde is the first Aggie to be named MRGC Gymnast of the Year, while Sullivan is just the second USU gymnast to garner Freshman of the Year accolades after DeHarde won the award in 2018.

DeHarde also earned MRGC Co-Beam and Floor Specialist of the Year accolades, as well as earning first-team honors in each event.

“How cool is that for Autumn?” Smith said. “It is so great for the conference to recognize just how impactful she is on our team. Her consistency and the quality of her gymnastics is on another level and, on top of all that, she is just an absolute pleasure to work with.”

“When Sofi came in this summer, we all knew that she would be in a very good position to garner that award and I am just so happy for her and so proud of her for delivering such an amazing freshman campaign,” Smith said. “She is going to have an amazing career here at Utah State.”

Smith was in her third season at the helm. After beginning the year 0-5, the Aggies finished with a 7-6-1 overall record, marking the first time since 1999 they ended a season with a winning record. USU went 4-0 at home in the Dee Glen Smith Spectrum. It just the third time in school history USU has posted a perfect record at home, joining the 1978 (8-0) and 1979 (5-0) teams.

“I would not have received this honor had it not been for my two awesome assistant coaches, Erik Lewis and Amanda Wellick, and for my amazing student-athletes that truly bought into the culture that we have been working hard to create here at Utah State,” Smith said. “It is amazing what can be accomplished when you have the right people around you.”

Before the season was cut short in early March due to the coronavirus pandemic, the Aggies were ranked 29th in the nation with a National Qualifying Score (NGS) of 195.915 and had likely secured a trip to the NCAA Regional Championships for the first time since 2017. This is USU’s highest finish since ending the 2002 campaign ranked 27th.

During the season, the Aggies rewrote the record books as a team and as individuals. USU recorded a 49.175 on vault at Boise State, which is tied for fourth all-time in school history. Against BYU, the Aggies had a 49.10 on vault and a 49.275 on bars. Both marks tied for seventh in program history.

DeHarde and Sullivan tied for first in the MRGC and tied for 27th in the nation this season with a 9.895 NQS on beam. A four-time MRGC Beam Specialist of the Week honoree in 2020, DeHarde averaged 9.889 on beam, which ranks first all-time in single-season school history. The Sussex, Wisconsin, native had a career-high 9.95 on the event, which is tied for second all-time in school history.

Like DeHarde, Sullivan was a four-time MRGC Beam Specialist of the Week award winner. She captured her first-career beam title with a school-record 9.975 at Air Force in January, which also ranks second all-time in MRGC history.

With her 9.975 on beam, Sullivan became just the fourth-different gymnast in USU history to record that score, joining Christy Denson (once on floor and once on bars), Amber Jamison (bars) and Madison Ward-Sessions (floor).

Sullivan also had a 9.950 on beam. The native of Manhattan Beach, California, averaged 9.883 on the event, which ranks second all-time in single-season school history.

DeHarde tied for first in the MRGC and tied for 43rd nationally with a 9.895 NQS on floor. A three-time MRGC Floor Specialist of the Week honoree in 2020, DeHarde averaged 9.883 on floor, which ranks second all-time in a single season in school history.

Sullivan also earned first-team honors in the all-around as she ranked third in the MRGC, eighth in the North Central Region and 41st in the nation with a 39.120 NQS. She captured three all-around titles as part of her eight total titles in 2020. She averaged 39.036 in the all-around and had a personal-best score of 39.325.

Aggie junior Leighton Varnadore also earned all-conference accolades. She was named to the second team on vault and in the all-around.