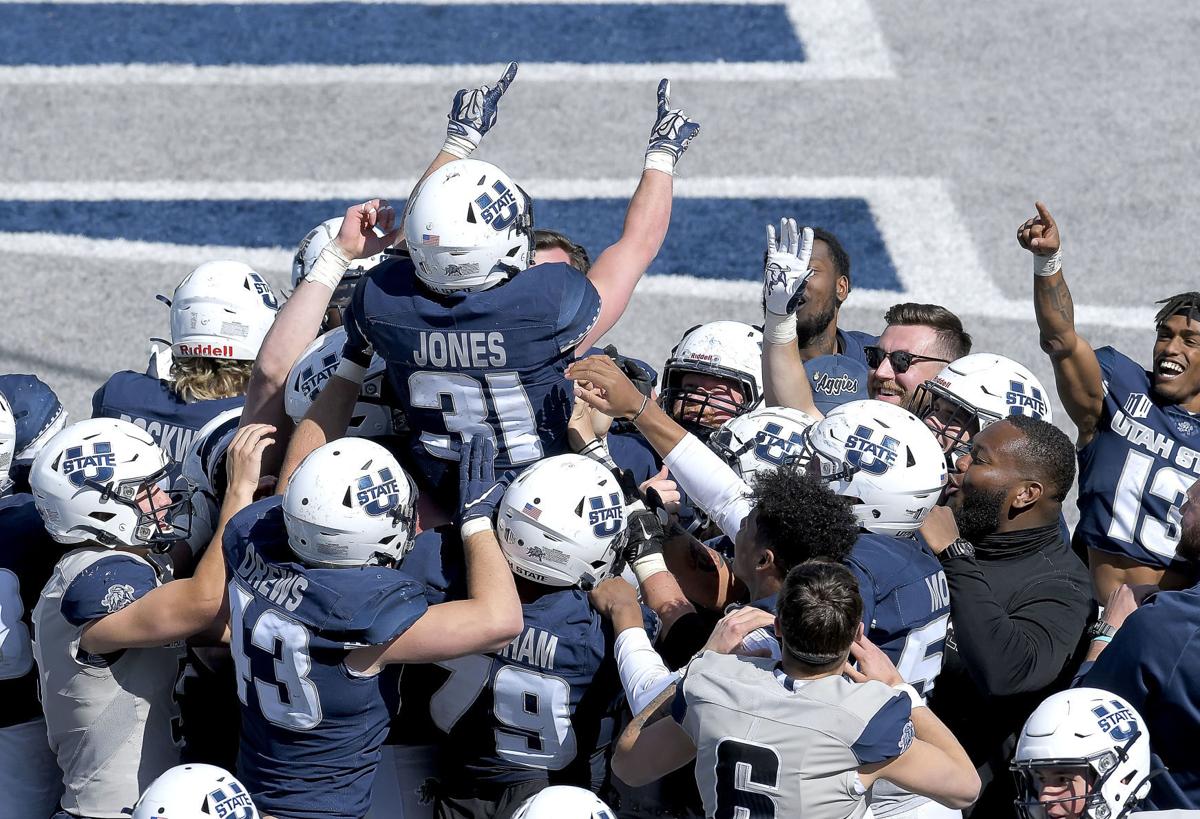 Offensive players celebrate with Cooper Jones (31) after he scored the winning touchdown as time expired in the Blue-White Spring Game on Saturday at Maverik Stadium. 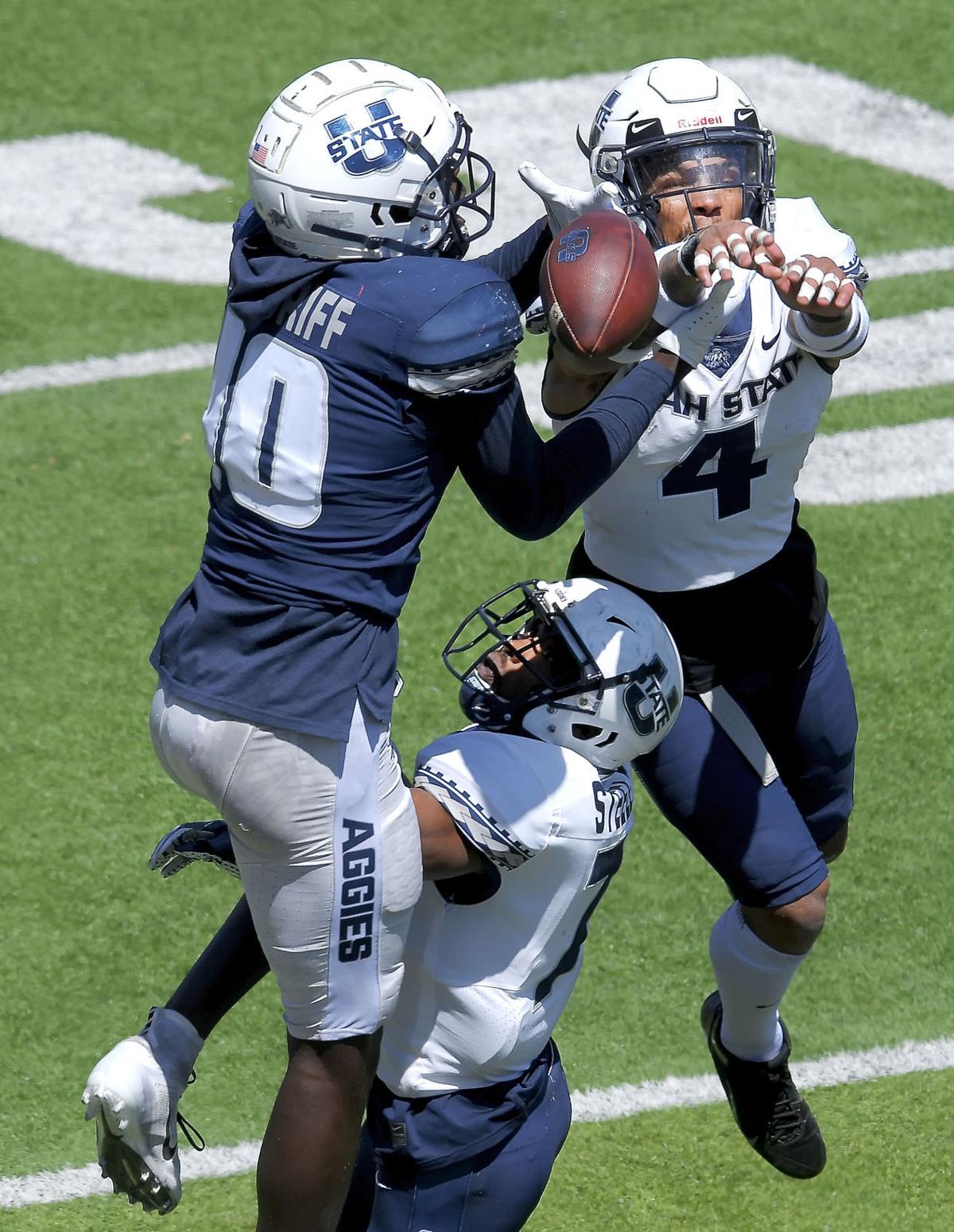 Utah State defensive back Shaq Bond (4) breaks up a pass intended for Justin McGriff as Xavion Steele helps defend during the Blue-White Spring Game on Saturday.

Offensive players celebrate with Cooper Jones (31) after he scored the winning touchdown as time expired in the Blue-White Spring Game on Saturday at Maverik Stadium.

Utah State defensive back Shaq Bond (4) breaks up a pass intended for Justin McGriff as Xavion Steele helps defend during the Blue-White Spring Game on Saturday.

It was kind of a sluggish start to Utah State’s annual Blue vs. White Spring Football Game for the Aggie offense, but those players and coaches ultimately made the necessary adjustments.

The offense scored touchdowns on three straight possessions in the second quarter and then made enough plays late in the second half to hold on for a 53-46 victory over the defense in a sunny Saturday afternoon at Maverik Stadium. Tailback Cooper Jones found paydirt on a 2-yard run in the waning seconds of the second half — which featured one 30-minute quarter with a running clock — to break a 46-46 deadlock between the two units at the well-attended scrimmage.

“It’s funny. We’ve been doing the scoring system for the last five, six years and it always comes down to the last drive,” USU head coach Blake Anderson said. “It just inevitably comes down the last drive. ... We wanted it to be competitive and nobody quitting made that possible.”

Additionally, Anderson is confident the Aggies will be at full strength this summer.

“The surgeries that were needed to get guys prepared were done early,” he said. “All of those guys should be back for summer work. I don’t expect any of the injuries that we’ve had over the course of the spring will linger into fall camp. I think everybody should be back full speed and we need to have a good summer, a safe summer, in training and don’t create any other issues, but to get through spring ball with as much banging as we did and to not tell you we lost somebody for the season is a blessing because that does not always happen.”

The Aggies were especially short-handed in the offensive trenches as only seven O-linemen were available for the scrimmage. These seven athletes were Falepule Alo, Cole Motes, TCU transfers Quazzel White, Demytrick Ali’ifua, Alfred Edwards, Chandler Dolphin and Wade Meacham.

Even with a lack of offensive linemen, that unit still performed well enough to help quarterbacks Andrew Peasley and Cooper Legas complete 27 of 40 passes for 366 yards and five touchdowns, vs. one interception. Additionally, six different tailbacks teamed up to rush for 292 yards and a pair of TDs on 48 attempts.

“With seven O-linemen, to get the day we got today without causing any other issues, I was pretty pleased,” Anderson said. ... (There’s) nothing that’s going to be lingering into the fall, but enough to keep us really limited today and it made it tough, but man they fought through and we got all seven through today. They all made it, none of them went down, so (we were) kind of holding (our) breath, but it was a plus.”

It was a good day for Peasley, who threw for 234 yards and a trio of TDs — two to dynamic playmaker Deven Thompkins. Peasley was intercepted by safety Dominic Tatum, but his decision making was spot on during the lion’s share of the scrimmage.

“I thought Peasley did a good job of extending plays and creating a couple of big ones,” Anderson said. “The (first) one DT (Thompkins) scored on was (Peasley) creating and that’s the thing he does really well. You know, (Arkansas State transfer quarterback Logan) Bonner’s been out all spring with a broken bone in his foot. We would have loved to have seen him get reps with this group, but they’ve been really valuable reps for that quarterback room.”

It was a traditional scoring system for the offense, which was awarded an extra point — so eight total points — if its touchdown took place inside the red zone. The offense finally picked up a first down on its fifth series and nearly broke through for seven points, but cornerback Zahodri Jackson batted away a Peasley pass to speedster Savon Scarver in the end zone just in time.

The first touchdown took place on the seventh series and it was an impressive 12-play, 85-yard march at the end of the first quarter. The first half consisted of two 10-minute quarters.

Running back Calvin Tyler Jr. carried the ball six times for 26 yards on the possession, and the Oregon State transfer was wide open when he hauled in a screen pass from Peasley and scored easily from 15 yards out. A big 26-yard Peasley-to-Thompkins connection on third and eight kept the drive alive.

The offense sparkled in the second quarter as it marched 82, 65 and 65 yards to paydirt on back-to-back-to-back possessions. Peasley bought time in the pocket and found Thompkins over the middle, and No. 13 darted past a would-be tackler on his way to a 59-yard TD.

One series later, Legas hooked up with Kyle Van Leeuwen on a post route for a 39-yard scoring strike. A couple of minutes later, John Gentry sprinted through a big hole for a 21-yard scoring run.

The offense put up seven points one more time in the second quarter as Legas connected with Quinton Hadnot in stride from 37 yards out.

“Today in the spring game the offense started a little slow,” Peasley said. “You know, the coaches kept trying to pick us up and get the tempo going. We had a few big plays and it kind of just took off from there. I think we finished really well. Obviously the last drive there was a lot of energy to win the day, so all around I thought it went pretty good. All the quarterbacks did pretty well and on Monday we’ll come in and evaluate what we did, and get better.”

The first series of the second half also resulted in a touchdown. The 11-play, 65-yard march was capped off by a 9-yard toss from Peasley to Thompkins. Thompkins somehow snared a 22-yard reception over the middle in heavy traffic one play before the TD despite taking a big hit from standout safety Shaq Bond.

“It’s clear to see that DT has been probably one of the best recruits we had was getting him to stay put,” Anderson said about Thompkins, who entered the transfer portal last November, but elected to return.

Connor Cole booted a 37-yard field goal in the second half for the team’s final score before Jones’ aforementioned game-winning TD plunge. Jones burst through a gapping hole for a 50-yard scamper on that possession and finished with a team-best 94 rushing yards.

Cornerback Jaden Smith also intercepted a pass for the Aggie defense, which got two pass breakups from Bond and one sack from five different players — Addison Trupp, Marcus Moore, Kaleo Neves, James Hansen and Kevin Meitzenheimer. Tatum led the way with nine tackles, followed by Bond and Meitzenheimer with seven each.

“The defense played pretty great,” Bond said. “We were flying around to the ball. (There were) a few missed tackles we’ve got to clean up on, but overall I think (we got) hats to the ball today.”