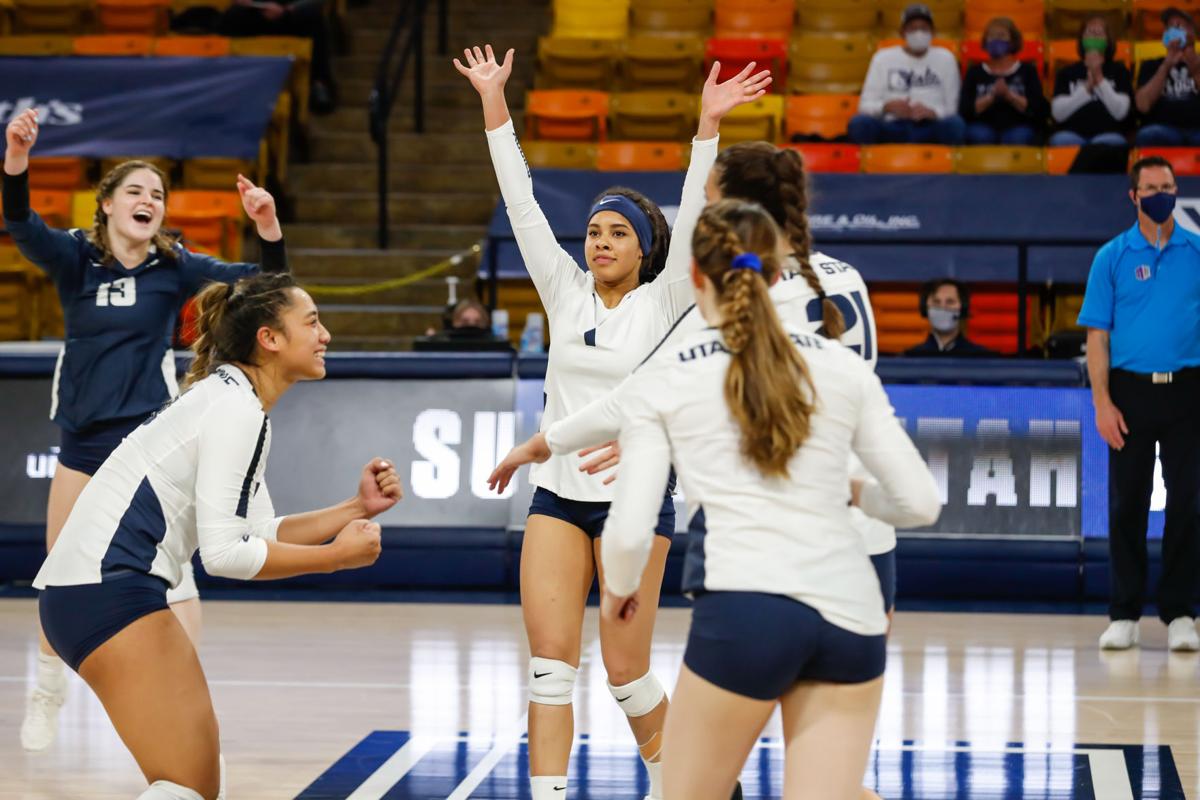 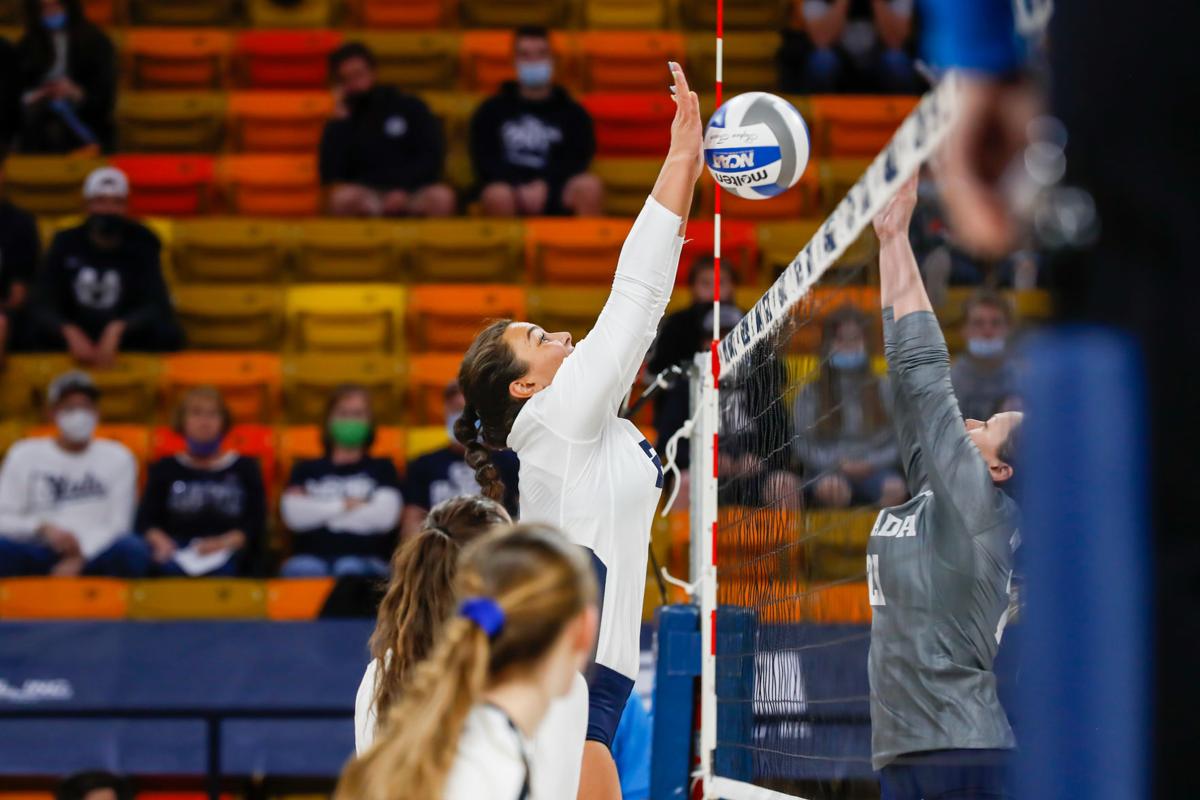 Utah State outside hitter Tatum Stall goes up to attempt a block against Nevada Thursday night in the Dee Glen Smith Spectrum. 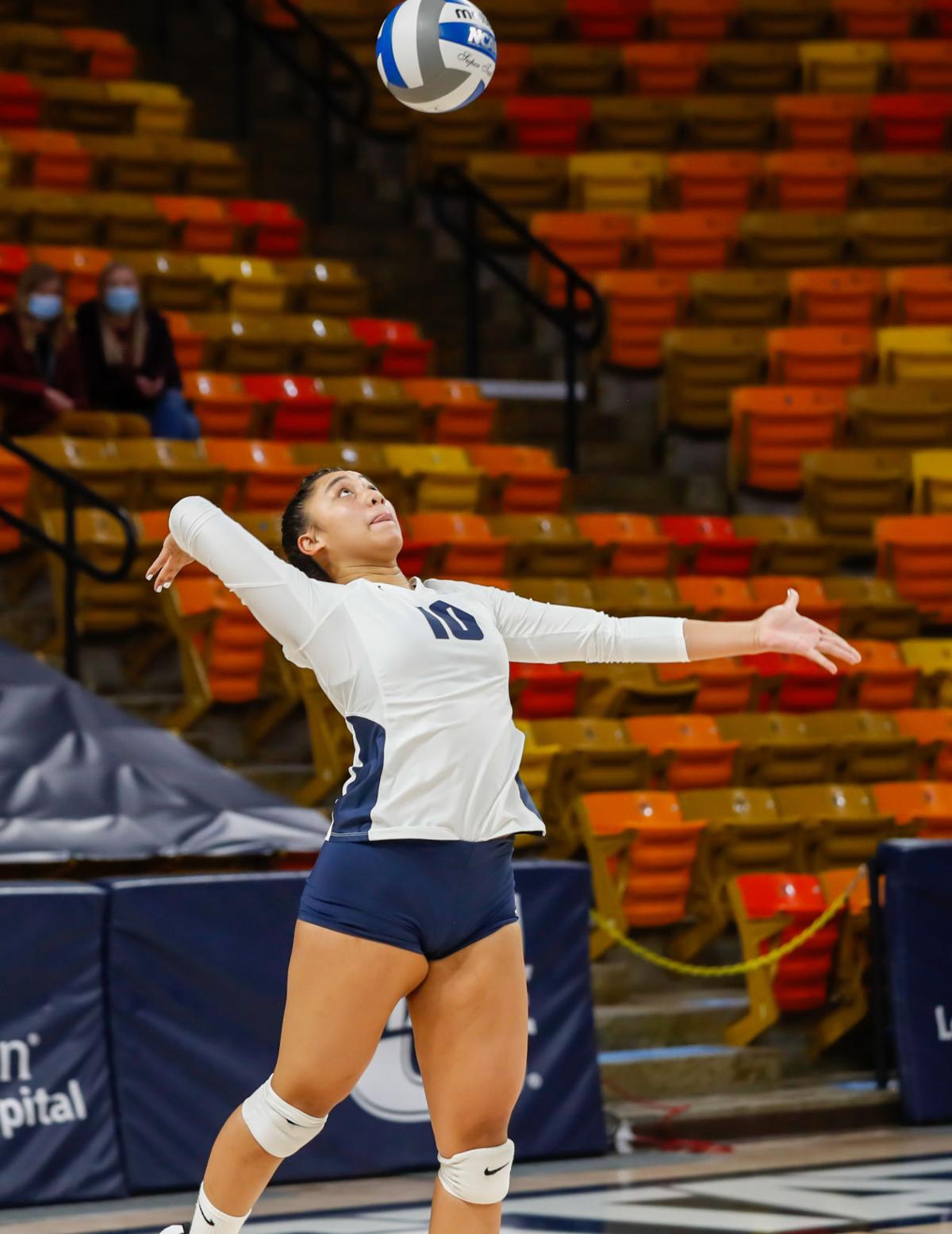 Utah State outside hitter Tatum Stall goes up to attempt a block against Nevada Thursday night in the Dee Glen Smith Spectrum.

It had been more than seven years since the Aggie volleyball team had played a match in the Dee Glen Smith Spectrum.

Utah State may want to play there more often.

“Oh my gosh to play here in the Spectrum in front of fans, we are stocked,” USU head coach Rob Neilson said. “To get some sort of normalcy, it’s amazing. … The craziness of COVID during the season has been wild. The players have done a fantastic job dealing with it.”

Other than a lapse in the third set after leading by eight, the Aggies (4-8, 4-8 MW) were in front most of the time against the Wolf Pack (3-10, 3-10). It was a nice sight for the first-year coach, who has had to deal with all sorts of hurdles as the fall volleyball season was pushed to winter/spring.

“This group has shown a lot of character, battling all season in lots of different ways,” Neilson said.

USU showed some grit after dropping the third set. Nevada had seized the momentum heading to the fourth, but didn’t keep it very long.

“We just made a couple of unforced errors in the third, and they (Wolf Pack) were playing hard and came back strong,” Aggie middle blocker Autumn Spafford said. “But we came back in the fourth set and put them in their place.”

Yes, the Aggies certainly did bounce back.

USU began the fourth with four straight points as the set began with back-to-back blocks by Spafford and Bailey Downing. Nevada would battle back to tie it up at 9-9, but could never take the lead.

Spafford had a kill and block, followed by an ace from Corinne Larsen as the Aggies reeled off four unanswered points. They would not trail again.

“Our coach told us to trust in each other, rely on each other and have each other’s backs,” Spafford said. “We do a lot better when we do that.”

In the middle of back-to-back kills by Whitney Solosabal-Parks and then Kristy Frank was an ace by Tatum Stall as the Aggies built a 24-14 lead with a 6-0 run. Larsen finished off the fourth set and the match with a kill.

“We were just grinding all night; it wasn’t pretty for us,” Neilson said. “We weren’t playing clean. The message they took to heart that last set was to just relax, have fun and play for each other. Once we relaxed, we were able to settle in and play a little cleaner and put it away.”

There were a number of noteworthy efforts by the Aggies. Spafford had a career-high eight kills with no errors, hitting .571. The junior also had eight blocks.

“It was fun to play in the Spectrum and in front of some fans,” Spafford said. “It was nice to have some fans cheering, and it was just a lot of fun.”

Stall and Solosabal-Parks led USU with 10 kills each, while Downing had nine. Abby Peterson had 15 digs, and Frank came up with 12. Ashlee McUne and Kalena Vaivai split time at setter with McUne finishing with a career-high 21 assists, while Vaivai had 19. Both setters had nine digs. Stall also had nine digs and served up three aces as the Aggies had 10 as a team. Frank and Larsen were both in on five blocks.

“This group has some good volleyball in it,” Neilson said. “Now we need to find it on a consistent basis. … Whitney (Solosabal-Parks) was playing a little different role tonight. She did a fantastic job tonight. Autumn (Spafford) did a really nice job. It was fun to see them have a good match and keep us in it.”

The opening set featured four lead changes and eight ties. USU used a 4-0 run late in the game to get some breathing room as Downing, Spafford and Frank had kills. Downing finished it off with kill.

The Aggies had six of their aces in the second set, three during an 11-2 run that put the hosts in front for good. Vaivai served up two of those aces. Spafford gave USU a 2-0 lead with a kill to finish off the second.

“Things are starting to come together really well,” Spafford said. “It’s been kind of crazy with COVID as some of us have been out at times. We are really starting to gel and figure out our roles on the team.”

Runs of 6-0 and 9-3 gave the Aggies an 18-10 lead in the third set. However, the Wolf Pack was able to reel off eight straight points to tie the set. Each side scored four unanswered to tie the set at 24-24. McGill had a kill and ace to give Nevada the win.

But the Aggies came storming back in the fourth.

USU has little time to enjoy the win as it travels to Colorado State for a Saturday afternoon match.

“It’s going to be a challenge for us,” Neilson said. “We are going to have to play better than we did tonight. We are excited for the challenge.”