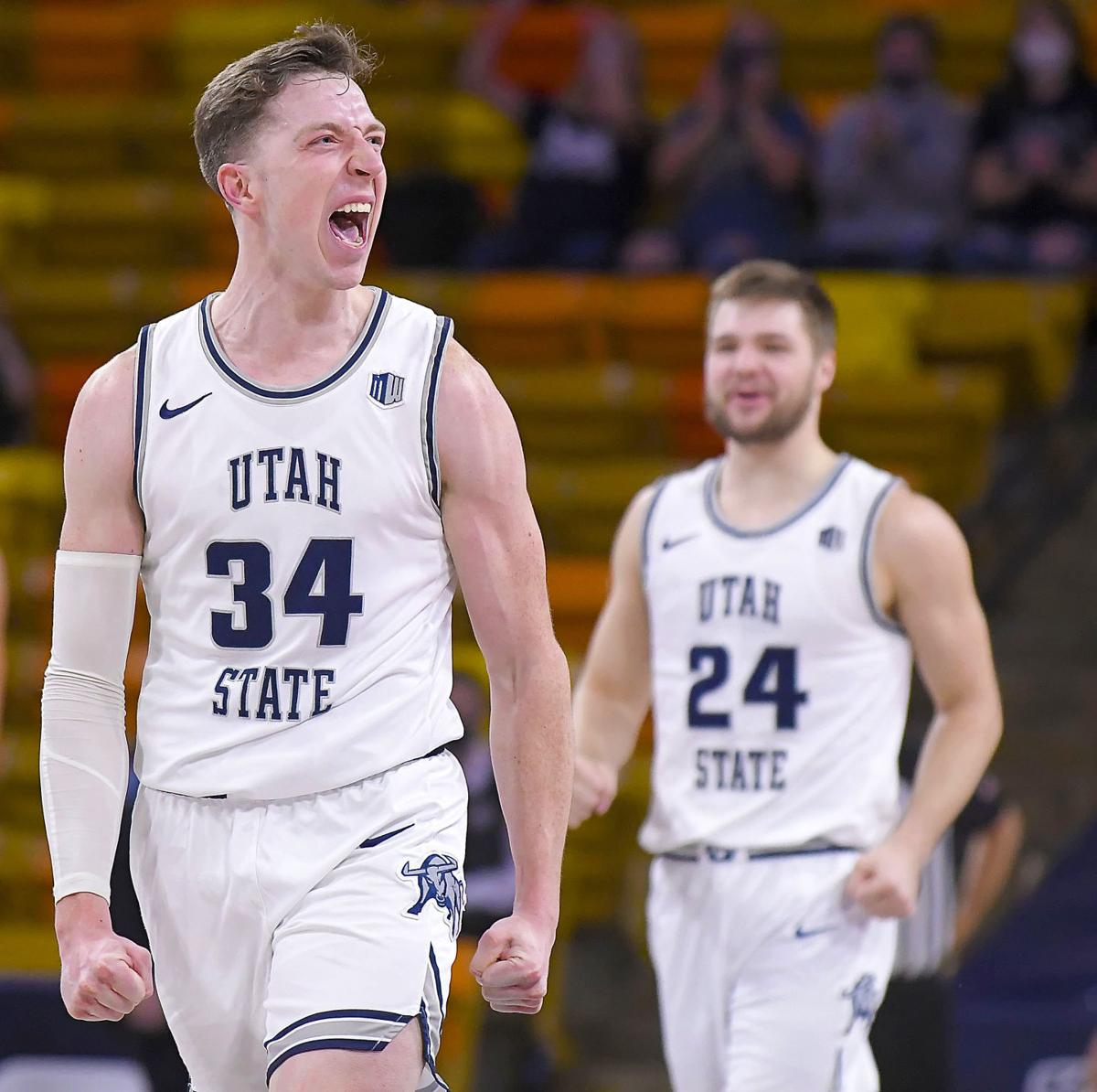 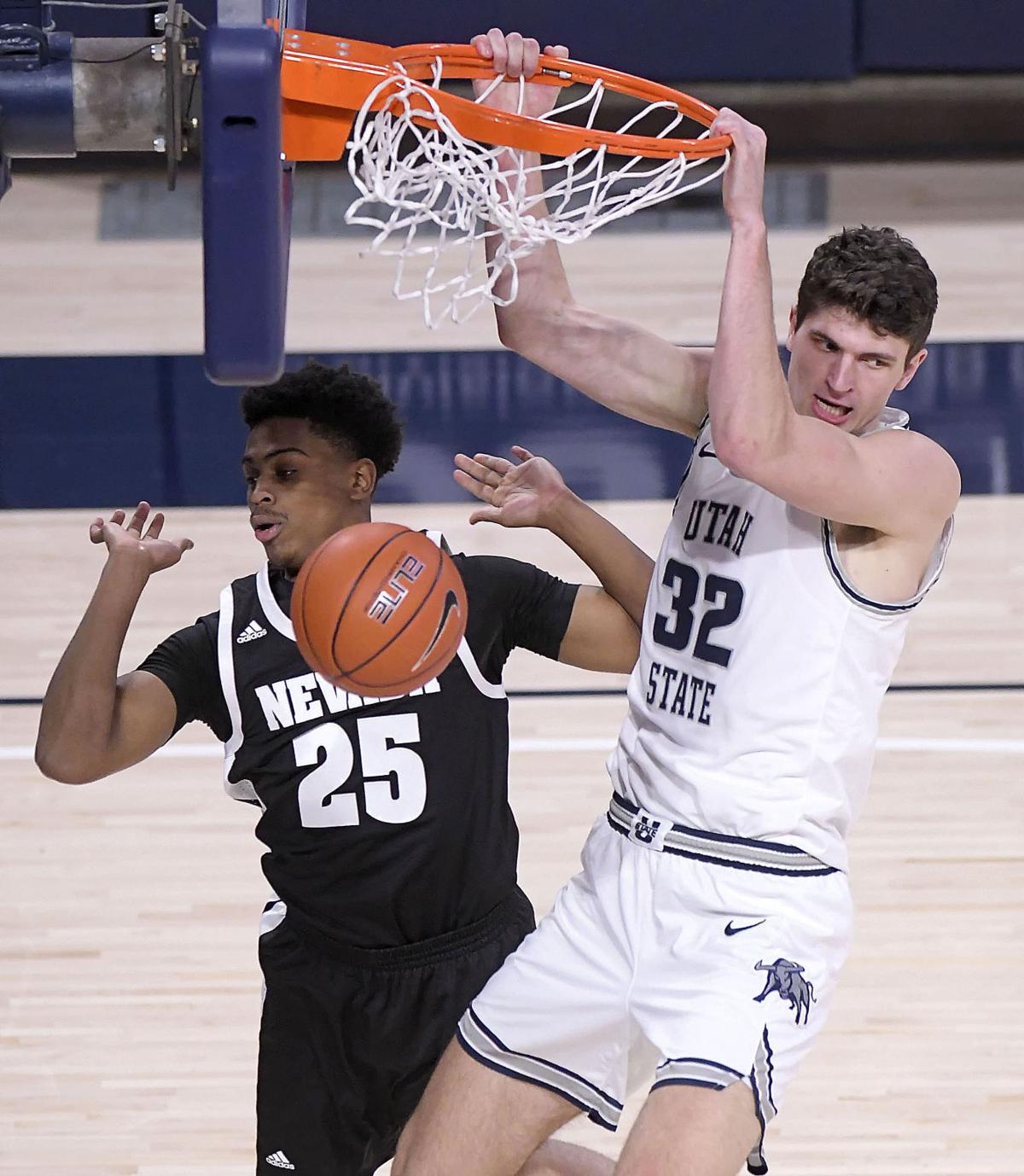 Utah State center Trevin Dorius (32) dunks the ball as Nevada guard Grant Sherfield (25) defends during the first half on Sunday in Logan.

Utah State center Trevin Dorius (32) dunks the ball as Nevada guard Grant Sherfield (25) defends during the first half on Sunday in Logan.

As the Aggies enter the final week of the regular season, they seem to be back to clicking like they were during an 11-game winning streak.

There are still concerns, mainly the health of two starting guards.

But the Utah State men’s basketball team took care of business this past weekend against a Nevada team that swept Boise State and was in the game late both times against San Diego State in southern California. On Sunday, the Aggies completed the sweep of the Wolf Pack with a convincing 87-66 Mountain West Conference victory where 13 players saw action.

“We made a lot of tough-guy plays,” Smith said. “We had 22 assists on 29 made shots and we had 12 turnovers, with two of those in the last two minutes. We did a really good job of taking care of the ball and playing in great rhythm.”

While USU finished with 12 turnovers, Nevada had 19. The Aggies also got to the free throw line and made their foul shots, going 25 of 27.

“We didn’t shoot it great, but we had 42 points in the paint,” Smith said. “We forced some threes, but we made a lot of hustle plays and got our hands on a lot of balls. We were really active on the ball. ... I was really proud. We made a lot of tough-guy plays.”

For the 23rd time — yes, that’s every game — this season, the Aggies outrebounded the opponent. It wasn’t even close against the Wolf Pack as USU won the rebound battle, 47-24. The Aggies also had double-digit offensive rebounds (17) for the 19th time this season. USU has now outrebounded its opponent by double-digits 12 times this season.

“Bean works so hard to get rebounds,” said Neemias Queta, who tied with Justin Bean for the game high in rebounds with 13. “It’s so hard to stop him. He is really important for us and makes tough-guy plays.”

Queta and Bean each had double-doubles. Queta finished with a game-high 26 points, while Bean netted 17 points. Each made hustle plays and crashed the boards.

“When you have Neemias Queta and Justin Bean each having six offensive rebounds, it’s so hard to get four or three offensive rebounds in a game,” Smith said. “Bean does it regularly and Queta has been doing it much more frequently. Part of it is effort, but you also have to have instincts and knowing your teammates. To have two guys do that in the same game is incredible.”

Joining Queta and Bean in double-figure scoring was Alphonso Anderson (12) and Marco Anthony (11).

For the fourth straight game, Rollie Worster did not start as he was replaced in the starting lineup by Anderson, but Worster did play Sunday, logging 14 minutes and he had three points, three rebounds, two assists and a steal.

“You bring in (Rollie) Worster, that really helps,” Smith said. “Then you see (Max) Shulga getting better game-by-game as he gets more experience. Great team win, great balance. ... Max has great hands and great instincts, and so does Worster. Marco (Anthony) was really active. He has played two excellent games.”

“I feel like we made a lot of progress this week,” Smith said. “The Boise series, we just left a lot of plays out there. They (Broncos) are good, but we still had a chance in those games. That is exciting, because we didn’t play great. I just feel we have gotten better in the last week. We need to keep the momentum going. I feel like we are getting our footing back and hopefully we can keep it going.”

After the win Utah State moved up one spot to No. 49 in the NET rankings, while Nevada dropped five spots to No. 107. … Nevada had just one offensive rebound, a season low for a USU opponent. … The Aggies shot a season-high 92.6 percent from the free throw line. … USU had a season-high-tying 11 steals. … Queta had his 25th career double-double to move into 10th place on the career list. He also joins Wayne Estes and Bob Lauriski for No. 6 on the career 10-rebound games with 32. … Bean recorded his 23rd double-double of his career to rank 11th on the career list. He also moved into a tie with Mike Santos at No. 4 for career 10-rebound games with 33. … Shulga played a career-high 24 minutes and also had career highs in rebounds (8), steals (4) and assists (2). ... The Aggies lead the all-time series with the Wolf Pack, 39-23, and are 23-5 in the Spectrum.

After no dunks in the previous game, the Aggies had two within the first seven minutes of the game. Trevin Dorius threw down a pass from Bean. A minute later, Queta hustled and was rewarded on a fastbreak with a pass from Marco Anthony for a slam. Queta had another dunk just before the break off another pass from Anthony.

Anthony got into the action in the second half when Queta found him open on a long pass. Queta threw down one late in the game on a pass from Worster.