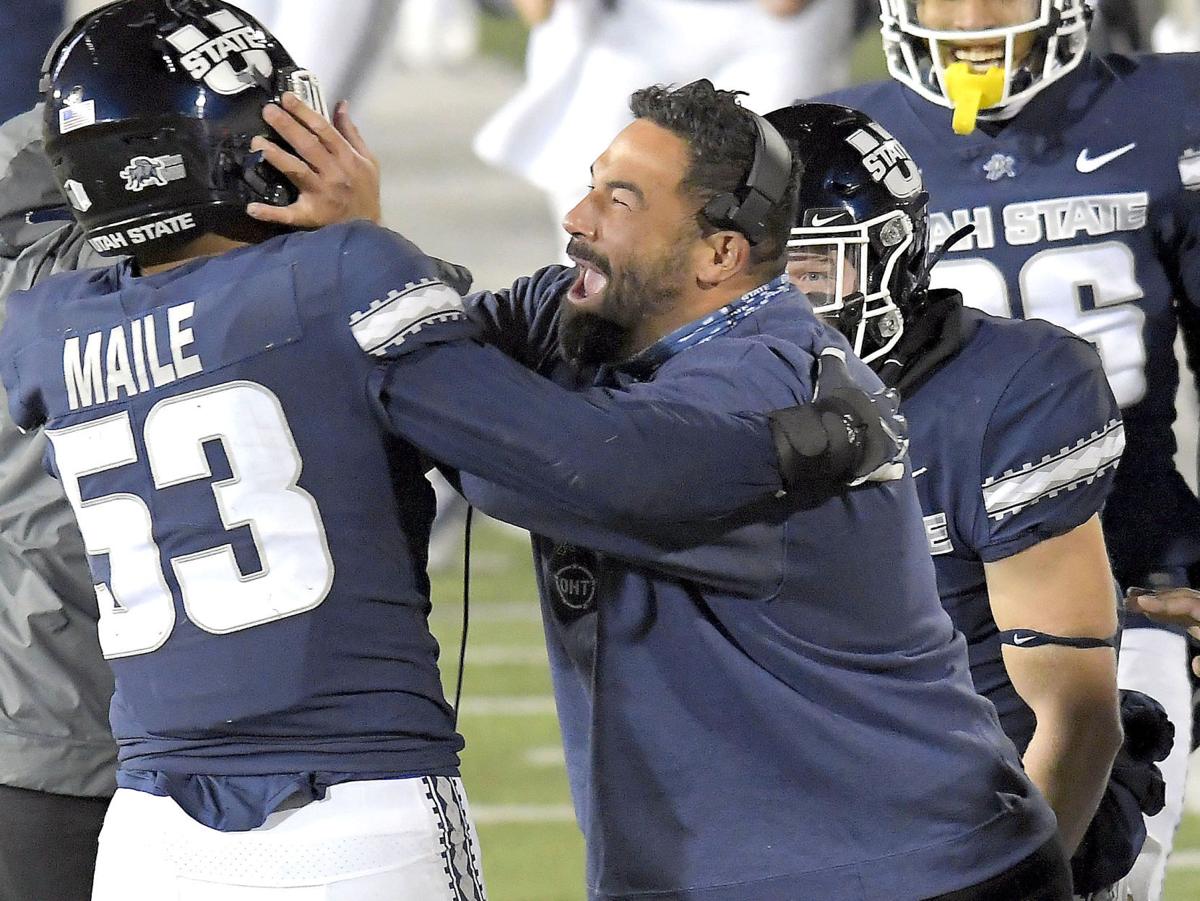 Utah State linebacker coach Justin Ena, right, celebrates with linebacker Kina Maile (53) after he returned a fumble for a 16 yard touchdown in the third quarter against New Mexico on Thursday in Logan. 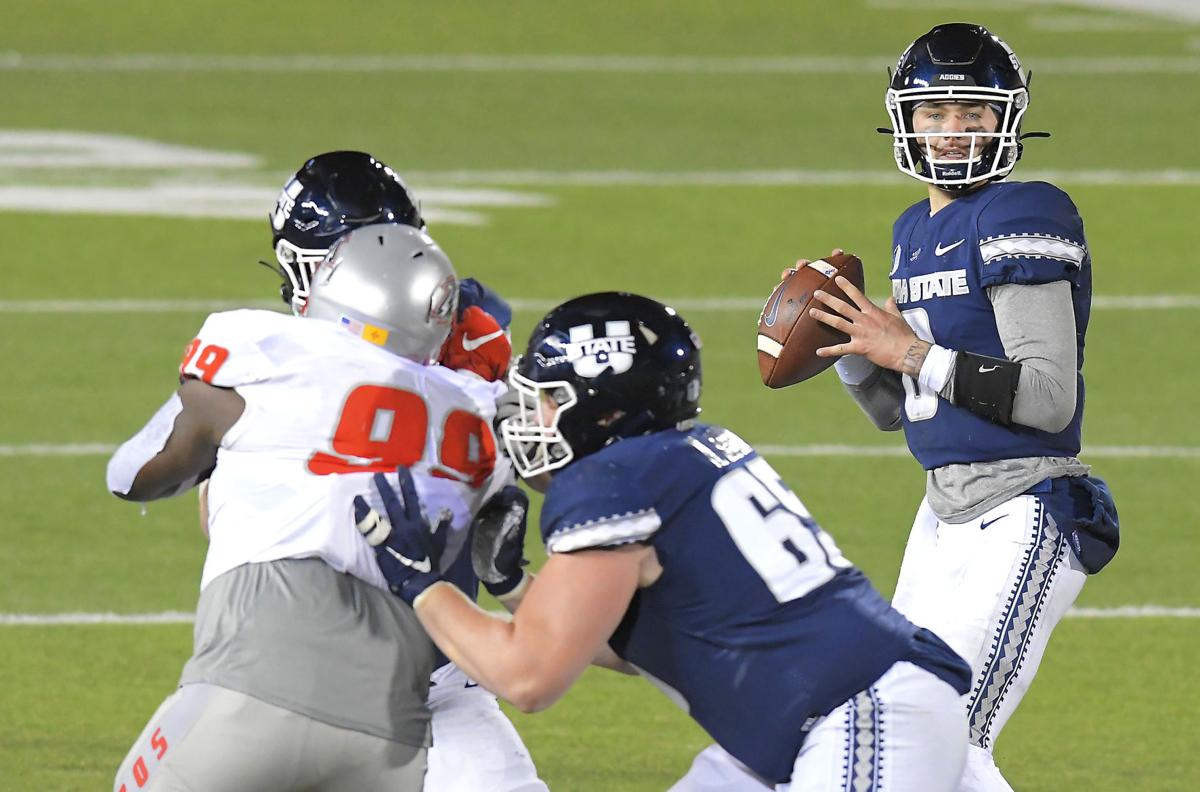 Utah State quarterback Andrew Peasley (6) looks to throw the ball to wide receiver Savon Scarver for a 26 yard touchdown in the third quarter against New Mexico on Thursday in Logan.

Utah State linebacker coach Justin Ena, right, celebrates with linebacker Kina Maile (53) after he returned a fumble for a 16 yard touchdown in the third quarter against New Mexico on Thursday in Logan.

Utah State quarterback Andrew Peasley (6) looks to throw the ball to wide receiver Savon Scarver for a 26 yard touchdown in the third quarter against New Mexico on Thursday in Logan.

There are many reasons the Aggies started the 2020 football season with four straight loses, but one of the biggest ones is they were thoroughly outplayed in one quarter in each of those games.

In its season opener at Boise State, Utah State was outscored 21-0 in the second quarter and never recovered. A week later, San Diego State turned a 10-7 halftime lead into a commanding 31-7 advantage less than two minutes into the fourth quarter.

The Aggies jumped out to a 9-0 lead the following week at Nevada, but the Wolf Pack outscored the visitors 34-0 the rest of the way. The Wolf Pack tallied 14 of their points in a dominant second quarter. In USU’s fourth game, things went downhill for the Aggies when visiting Fresno State went off for a trio of touchdowns in the third quarter.

To the delight of quarterback Andrew Peasley, his Aggies were finally able to flip the script on Thanksgiving. USU exploded for 28 unanswered points in the third quarter en route to a come-from-behind 41-27 victory over New Mexico on Thursday night at Maverik Stadium.

“In the first half we kept driving down, just couldn’t finish in the end zone,” said Peasley, who sparkled in his first career start. “I had that fumble on the pylon. We went into halftime and just came out with some fire. We wanted to take shots, we took them and were successful. It felt good.”

As a result, the Aggies were able to end a five-game skid and secure the first win since dispatching of the Lobos on the road in their regular season finale a year ago.

“It’s a huge burden off our shoulders just to get the first win and get us on the right path,” USU freshman linebacker Kina Maile said. “We’ve been itching to get that zero off our record, and we finally got it. It feels wonderful, and I know we’ll celebrate this all weekend. We love this feeling.”

USU certainly played like a motivated squad in the second half. The Aggies surely felt like they were robbed of a golden scoring opportunity late in the second quarter when Peasley fumbled the ball at the pylon and it went out of the end zone for a New Mexico touchback.

Television replays appeared to show Peasley’s left foot landing out of bounds before he lost the ball. Had the ruling on the field been overturned, it would have been a third-and-goal scenario for USU inside the UNM 1-yard line.

It turned out to be a potential 10-point swing because the Lobos quickly marched 66 yards in nine plays and booted a 31-yard field goal with three seconds remaining in the opening half. Instead of likely facing a 13-10 deficit, the visitors had a 13-6 lead.

To their credit, the Aggies regrouped at the half and proceeded to take it to the Lobos early in the third quarter. How dominant was USU? It racked up 171 yards of total offense on its first three possessions — all of which resulted in touchdowns — and forced New Mexico to go three-and-out on its first three series.

The Lobos finished with negative-six yards of offense during that timespan as the Aggies got sacks from AJ Vongphachanh, Jakob Robinson and Nick Heninger, plus a tackle for loss from Shaq Bond. To make matters worse for New Mexico, its second punt of the quarter was blocked by Maile, giving USU the ball at the UNM 41-yard line.

Additionally, Heninger deftly stripped the ball from UNM signal caller Trae Hall as he was winding up to throw — just barely before Hall took a big hit from the blitzing Bond — and Maile scooped it up and returned it 16 yards to the house. In a seven-minute stretch of the third quarter, the Aggies turned a 13-6 deficit into a commanding 34-13 advantage.

Maile and Robinson were two of several freshmen who made their presence felt against the Lobos, who lost their 13th straight game, 20th consecutive Mountain West game and 12th road game in a row. Another true freshman, safety Luke Marion, sealed the win with an interception late in the fourth quarter, and he also broke up a pass earlier in the contest.

Another true freshman, Falepule Alo, started at center for the Aggies and helped spearhead the best performance by USU’s offensive line this season. Peasley was only sacked once and the Aggies averaged 5.5 yards per rushing attempt en route to a season-high 452 yards of total offense and an impressive 7.5 yards per play.

Other Aggie freshmen who were in for a significant amount of snaps Thursday were running backs John Gentry and Elelyon Noa, linebacker Kaleo Neves and defensive linemen Izzy Vaifo’ou.

Indeed, several young players have been called upon this season for USU, which has one of the youngest teams at the FBS level. The Aggies’ roster is comprised of 46 freshmen and 22 sophomores, which accounts for 65.4 percent of their players — a percentage that keeps going up as they continue to lose upperclassmen to the transfer portal.

“We’re all hungry as a group, I feel like as a whole team,” said Maile, who tallied a career-high six tackles. “But this freshman class they we’ve got, (it’s) special and I know they’re going to make a lot of plays from here on out.”

If there were any questions about whether the Aggies had given up on the season after their first 0-4 start since 2007, they clearly put those to rest against the Lobos. The passion and energy level on USU’s sideline was clearly visible, plus the coaches in the pressbox were vocal and celebrated on several occasions. Additionally, a few different video clips were posted on social media showing the team dancing and celebrating with some fervor in the locker room following the game.

This performance meant a lot to the Aggies, who have faced plenty of adversity in 2020, starting in March.

“This season took a turn back in (the) spring,” said Peasley, who accounted for 357 yards and four TDs against the Lobos. “You know, we had spring ball canceled, we all went home. Everyone in the world was struggling with COVID and they still are, and this team has had a lot of ups, a lot of downs. The season (gets) canceled, the season’s back on. You know, I’m just really, really, really proud of our team for just kind of sticking with it. You know, we never got down. Losing sucks and I feel like we showed up every day ready to compete, and in the end it’s going to pay off at some point.”

Rumors started swirling prior to Thursday’s game that USU running back Jaylen Warren was leaving the team. Warren, the team’s leading rusher this season, did not play in the game.

Those rumors are a reality as The Herald Journal has learned the former East High and Snow College standout has left the program. The rumors were confirmed Friday by a source close to the program.

The senior struggled with injuries during his time in Logan, but was an all-conference caliber performer when healthy. As a junior, Warren rushed for 569 yards and five touchdowns, and averaged 5.1 yards per carry.

In three games this season, No. 20 gained 252 yards on 39 carries (6.5 ypc) and scored three touchdowns. Warren, a 2019 academic all-Mountain West honoree, rushed for 89 yards and two scores against Boise State and accumulated 136 yards on nine carries against Fresno State.

Warren was selected as the 2018 NJCAA National Offensive Player of the Year as a sophomore at Snow College after leading all junior college players in rushing average (159.4 ypg). The Salt Lake City native also amassed more than 1,000 yards on the ground as a freshman.

It is unknown whether Warren is currently in the transfer portal. The Aggies lost three players to the portal last week in wide receiver Deven Thompkins, safety Troy Lefeged Jr. and linebacker/safety Cash Gilliam.