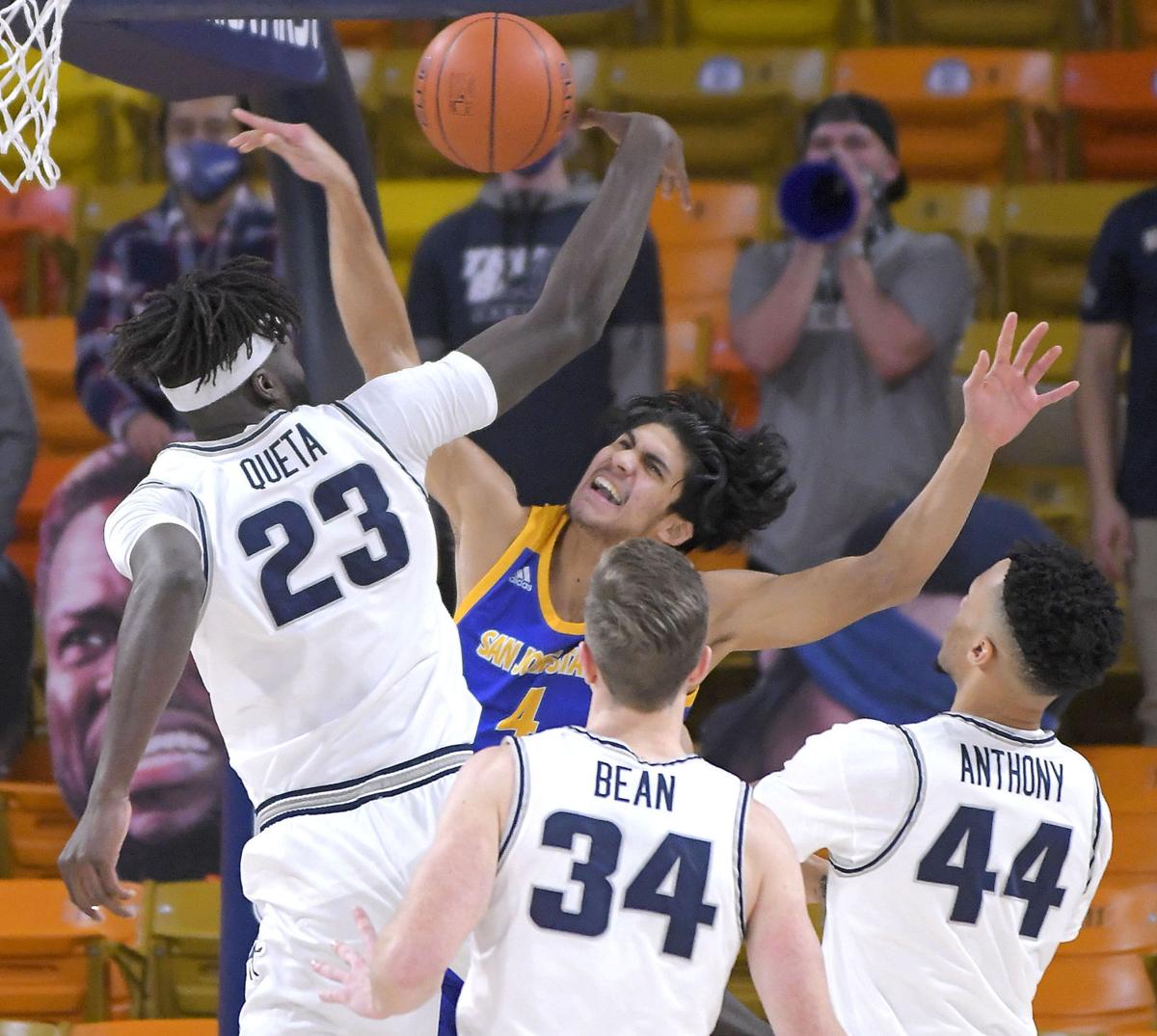 Utah State center Neemias Queta (23) blocks the shot of San Jose State guard Sebastian Mendoza in the second half of a game earlier this season. Queta is averaging 4.4 blocks a game in conference play as the Aggies prepare to play New Mexico Friday night. 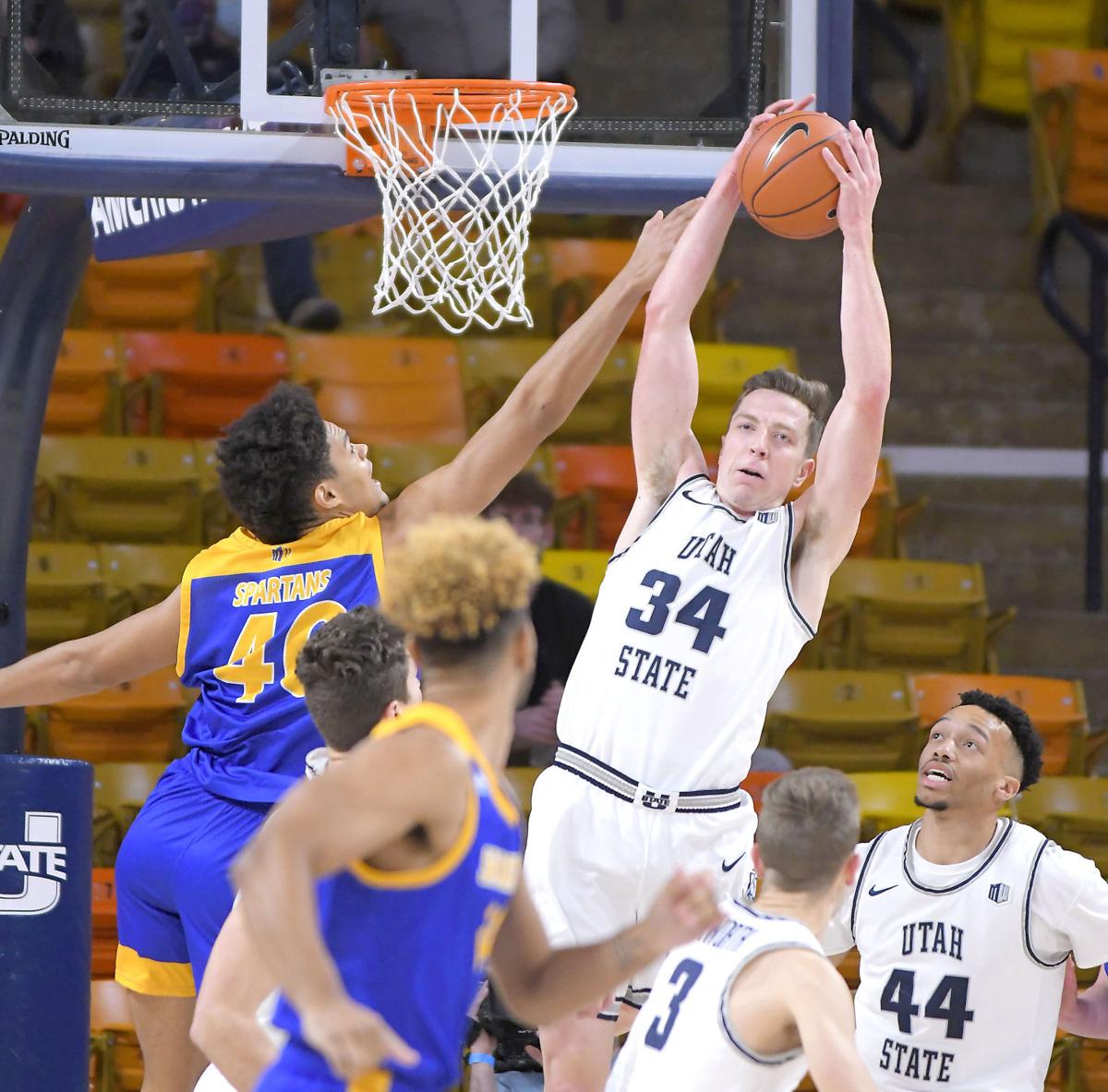 Utah State forward Justin Bean (34) grabs a rebound against San Jose State forward Chase Courtney (40) during the first half on Wednesday in Logan. 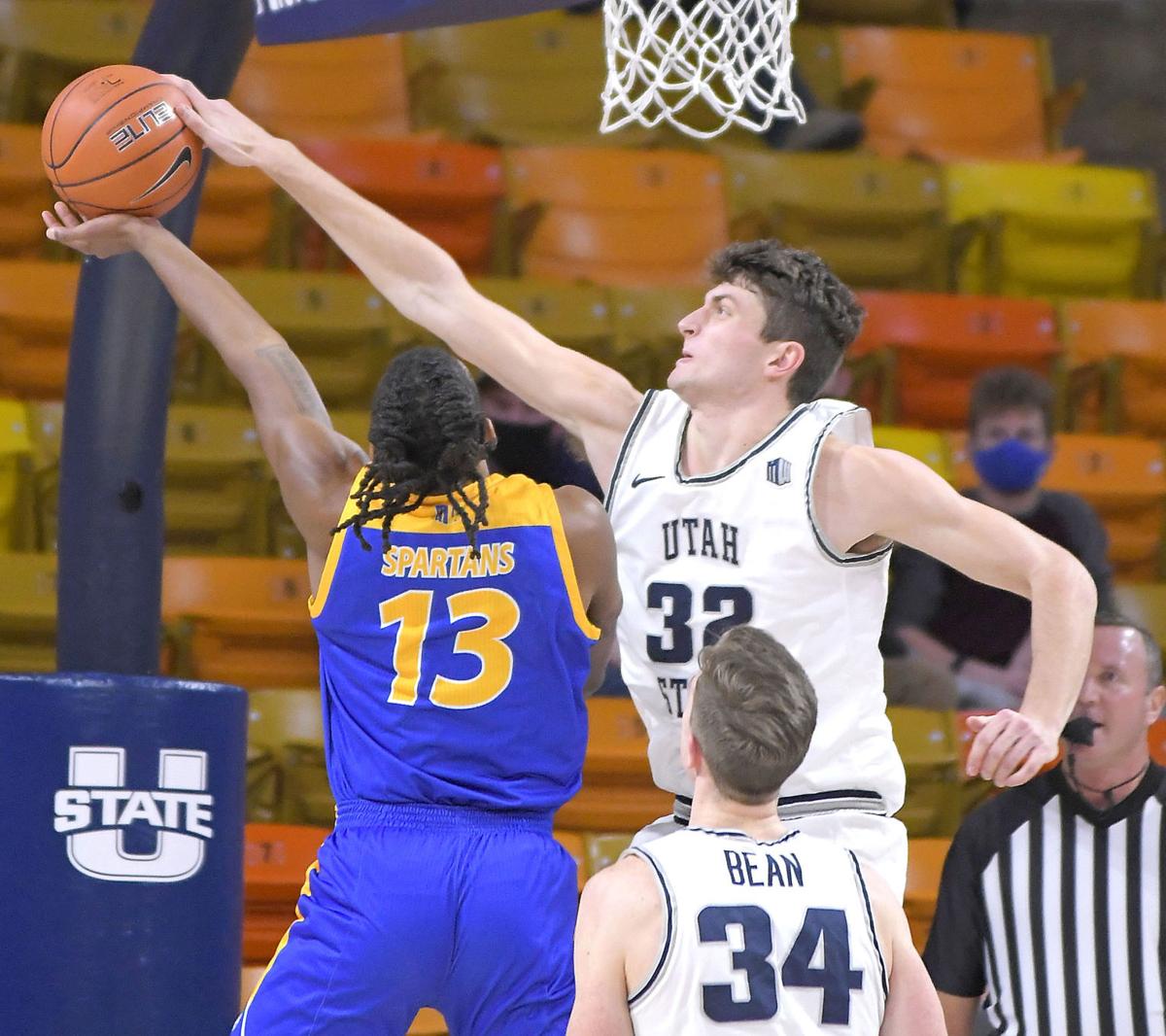 San Jose State guard Seneca Knight (13) gets his shot blocked by Utah State center Trevin Dorius (32) as forward Justin Bean looks on during a game last week in the Spectrum.

Utah State center Neemias Queta (23) blocks the shot of San Jose State guard Sebastian Mendoza in the second half of a game earlier this season. Queta is averaging 4.4 blocks a game in conference play as the Aggies prepare to play New Mexico Friday night.

Utah State forward Justin Bean (34) grabs a rebound against San Jose State forward Chase Courtney (40) during the first half on Wednesday in Logan.

San Jose State guard Seneca Knight (13) gets his shot blocked by Utah State center Trevin Dorius (32) as forward Justin Bean looks on during a game last week in the Spectrum.

It’s not very often all 15 players that dress get to play and even more rare that occurs in two straight games.

The Utah State men’s basketball team got to enjoy that before taking a break for Christmas. And to make it even sweeter, those two games were the beginning of Mountain West Conference play.

“We have put together some good games since the first two,” Aggie head coach Craig Smith said. “... I thought we have seen a lot of really good things from some different guys.”

For the second straight game, USU (5-3, 2-0 MW) went to the bench often and as state already deep. The starters all got a few more minutes on Wednesday — at least 20 — with Brock Miller getting the most at 24. Two players came off the bench and played 21 and 20 minutes in Steven Ashworth and Sean Bairstow, respectively.

“I just need to go in and do what I can do for the minutes I’m in there,” said USU center Neemias Queta, who logged 20 minutes. “I can’t control how much I’m in there. When I’m in there, I’m going to give it my best.”

Many Aggies drew praise from Smith, including Queta. The 7-footer tied his career high with six blocked shots, had a season-high 11 rebounds, scored nine points and dished out four assists.

“Brock (Miller) is playing with an edge,” Smith said. “He is playing with a lot more determination. He is just playing determined. He is making tough-guy plays. He has welcomed the challenge and guarded the ball at a high level.”

Eight Aggies scored at least six points Wednesday night. Freshman guard Rollie Worster led the way with a game-best 15 points. He was joined in double figures by Miller (12) and Bairstow (11).

“It’s a fine line because you want Queta and Bean and Marco and Brock to get a bunch of reps in playing to stay in a rhythm and stay in a groove,” Smith said. “At the same time, you are trying to give young guys valuable playing experience. I do feel we have the deepest bench since I’ve been here. Maybe that hasn’t shown yet, but we have some talented guys on this team.

“... It’s hard for those guys like Bean and Queta to put up those kind of numbers in that kind of time. They just played determined and aggressive.”

While the Aggies were enjoying playing all of their athletes, the Spartans (1-4, 0-2) were struggling big time. Coming into the game guards Richard Washington, Seneca Knight and Omarie Moore were averaging double figures in scoring. They didn’t have much success in Logan.

“We depend a lot on our big three, and it just wasn’t going tonight,” SJSU head coach Jean Prioleau said. “Utah State’s size matters at this level. Hats off to them, I thought they played really well. Coach Smith does a great job with this group. We just have to regroup. Our league is really tough, relentless and unforgiving. That being said, I thought our guys played harder than they did the first night.”

It was closer on Wednesday. The Aggies won the first game by 45 points.

Washington came off the bench Wednesday to lead the Spartans with 11 points on 4 of 17 shooting from the field. The senior began the week third in the country in scoring at 26.3 points per game. He scored 20 on Monday, mostly at the end of the contest against USU’s reserves.

Knight, an all-league player last season, was not a factor. After scoring seven points on Monday, he had just four on Wednesday, going 1 of 12 from the field. Moore only took four shots, making one and finishing with six points. He had three points on Monday.

After a blowout victory on Monday, the Aggies came out fired up and focused on Wednesday. While the teams made adjustments, the games played out very similar. USU jumped in front early, enjoyed a double-digit lead at halftime and put the game away to start the second half.

“You need to be ready to play every day,” Queta said. “It doesn’t matter what happened the game before. You’ve got to come in ready to play the next game. You have to give it your best every day. ... The first five minutes of the second half are always key for us. We want to start off great and get a little separation and make sure we finish it.”

Queta blocked four shots in the early going of the second half and dunked over two Spartans. That certainly set the tone for the rest of the game.

“It’s absurd how many games this year in these series, no matter where it is, like Northern Colorado won by 15 (against Idaho State) and then lost by 10, so many things come into play,” Smith said. “It’s a mentality of understanding every game is different. You make adjustments from one game to the next. ... There is always the game within the game, but I think it will be more prevalent this year. It’s human nature when you come off a big win or a good win to make sure you are ready to go for the next game.”