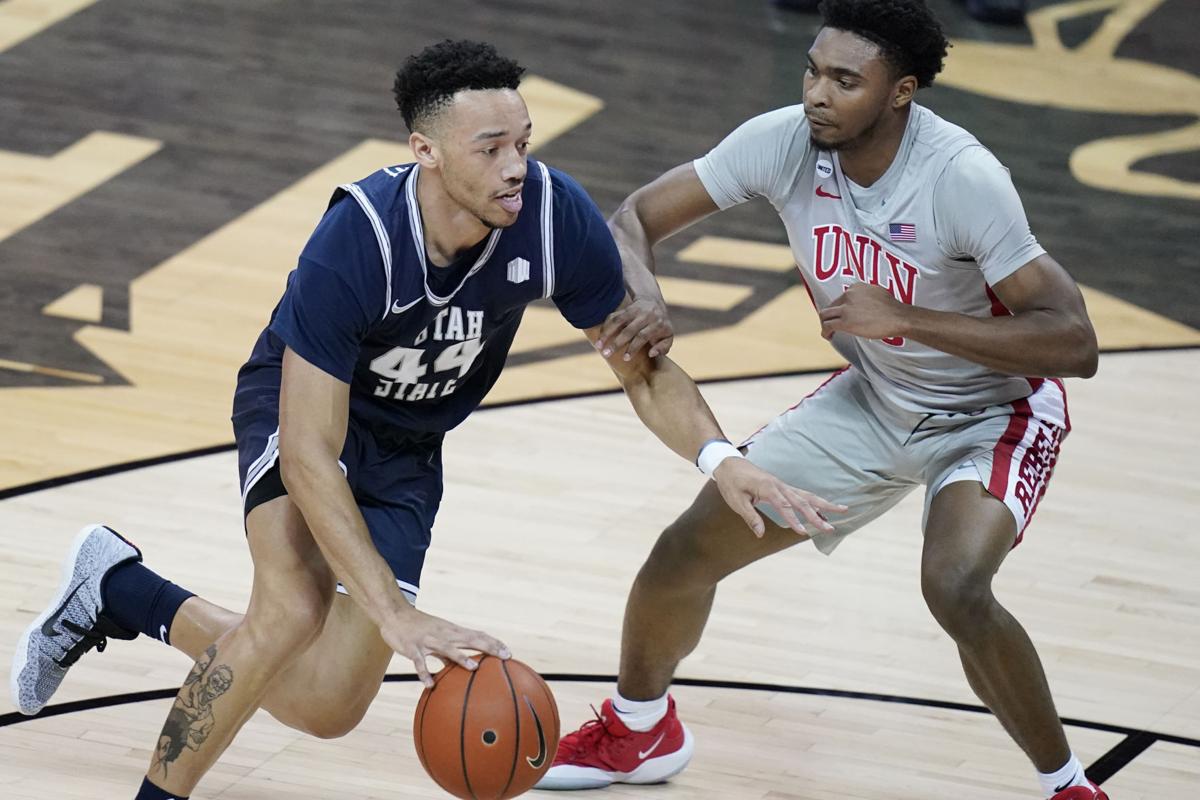 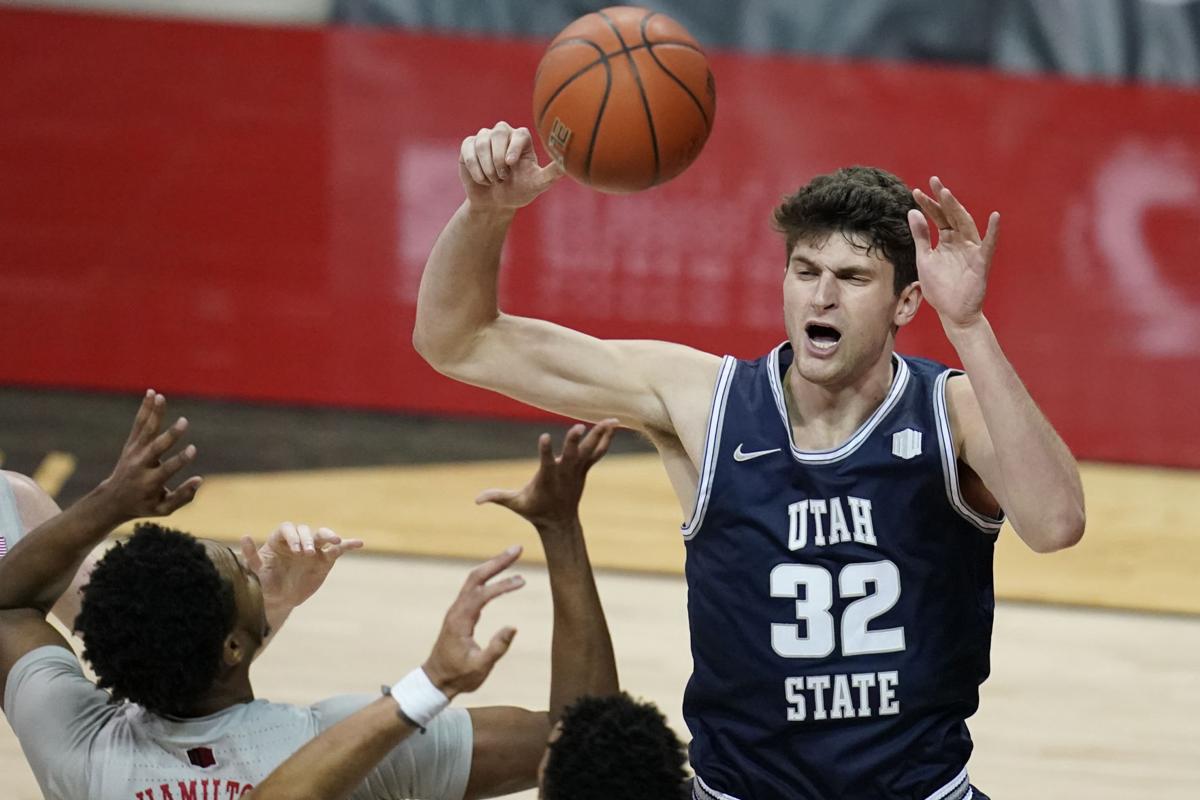 Utah State's Trevin Dorius (32) grabs a rebound against UNLV in the first half Monday night in Las Vegas.

Utah State's Trevin Dorius (32) grabs a rebound against UNLV in the first half Monday night in Las Vegas.

Ugly doesn’t even start to describe it.

The Aggies had one of their poorest offensive outings of the men’s basketball season and paid for it Monday night at Las Vegas. UNLV didn’t fare much better offensively, but was able to knock down enough 3-pointers and take advantage of 17 Utah State turnovers.

The Rebels held off a furious rally by the Aggies in the final 69 seconds to record a 59-56 Mountain West Conference victory at the Thomas & Mack Center.

"It was a tough night for the Aggies," USU head coach Craig Smith said. "Credit UNLV. I thought they played really, really well in a lot of respects."

Trailing by 10 late in the game coming up empty on possession after possession, USU (12-5, 9-2 MW) somehow made it a game. The Aggies scored eight unanswered points to get within 57-56 with 7.4 seconds to play.

"We gave ourselves a chance at the end with the press and created some turnovers," Smith said. "We got it down to a one possession game and had a chance to score down three, but don't run the set right. It's very frustrating."

The Rebels made two free throws with 5.6 seconds to play. The Aggies did get off a 3-point shot, but the attempt by Steven Ashworth was blocked by Moses Wood as UNLV won its fifth straight.

“UNLV is a very talented team and did their job tonight,” Anthony said. “On our end, we couldn’t get stops. We didn’t play how we are capable. We did good on defense, but couldn’t get the offense going.”

The Rebels made 13 of 30 from 3-point range for the game, while the Aggies could only make 5 of 22 from long range. The 13 treys by UNLV were the most given up by USU in a conference game this season. USU shot a season-low 32.8 percent from the field and the 56 points were also a season low.

"We weren't great on offense the whole night," Smith said. "... We need to find a way to get better on the offensive end. We've got to look at a lot of things. And way too many turnovers. It's very difficult to win on the road with 17 turnovers."

It was the Anthony and Queta show to start the game. Anthony hit a 3-pointer to get the scoring started. The guard then scored four points during a 6-0 run as USU built a 13-7 lead seven minutes into the contest.

Anthony and Queta combined for all of the Aggies first 15 points.

After five lead changes and trading four-point plays, the Rebels used a 6-0 run to get in front. The hosts remained there by hitting two 3-pointers in the final minute of the first half and took a 39-34 lead into the break.

UNLV hit 8 of 16 shots from beyond the arc over the first 20 minutes. USU had some open looks, but could only make 3 of 13 from long range in the first half.

"We couldn't throw a three in the ocean in the first half, except for the one we got fouled on," Smith said.

After trading 3-pointers to start the second half, the Aggies had more than handful of chances to take the lead. The Rebels went more than five minutes without scoring as eight possessions came up empty. Then the hosts hit — what else — a 3-pointer.

"The game is never over until the final buzzer," Anthony said.

Rollie Worster hit a 3-pointer off a pass from Brock Milller to give USU its first field goal in more than 12 minutes. Before the trey, the Aggies were trailing 53-43 with 4:15 to play.

USU made it interesting down the stretch, but couldn’t ever get out of the hole it had dug.

“The run at the end shows the heart that we have,” Anthony said. “We just kept playing.”

Utah State began the day at No. 50 in the NET rankings, while UNLV checked in at No. 153. … With the loss, USU has won seven of its last nine games inside the Thomas & Mack Center, spanning the MW Tournament games and road contest at UNLV. … The Aggies won the rebound battle, 44-38, for the 17th straight game this season and are 64-13 under Smith when that happens. … The Rebels lead the all-time series with the Aggies, 34-9.

Guard Zahar Vedischev has left the team. He did not dress for the two home games last week against Colorado State, but was in the Spectrum watching from the stands.

The true freshman from Moscow, Russia, has decided it wasn’t working out for him at USU and has decided to leave. Vedischev saw action in five games for a total of 21 minutes. He scored 11 points — making three 3-pointers — grabbed three rebounds and had an assist.

Queta gets the nod. The junior finished with a game-best 11 rebounds, scored eight points, matched his career-best with six blocked shots and dished out three assists.

It didn’t take long for Queta to add to his team lead. He took a pass from Rollie Worster and threw it down two-handed two-and-a-half minutes into the contest. It was the only dunk of the first half and the game.

The Aggies remain in Las Vegas for the second game of the series with the Rebels. USU and UNLV will play again late Thursday night. Tipoff is set for 9 p.m. and the game will be televised on FS1.

A rough fourth quarter was far too much for Utah State to overcome as UNLV outscored the Aggies 27-7 and left the Dee Glen Smith Spectrum with a 89-59 victory.

UNLV finished with a huge 61-37 advantage in the rebounding department, including a 20-5 edge on the offensive glass. As a result, the visitors were able to finish with a 16-2 edge in second-chance points.

Shyla Latone came off the bench and led the Aggies in points (12) and rebounds (five). Emmie Harris chipped in with 10 points and four assists for USU, which got nine points from Faith Brantley.

Four UNLV players scored 13 or more points, led by Delaynie Byrne’s game-high 18. Bailey Thomas flirted with a triple-double for the Rebels as she contributed with nine points, eight boards and eight assists.

USU will host UNLV on Wednesday at 6 p.m.