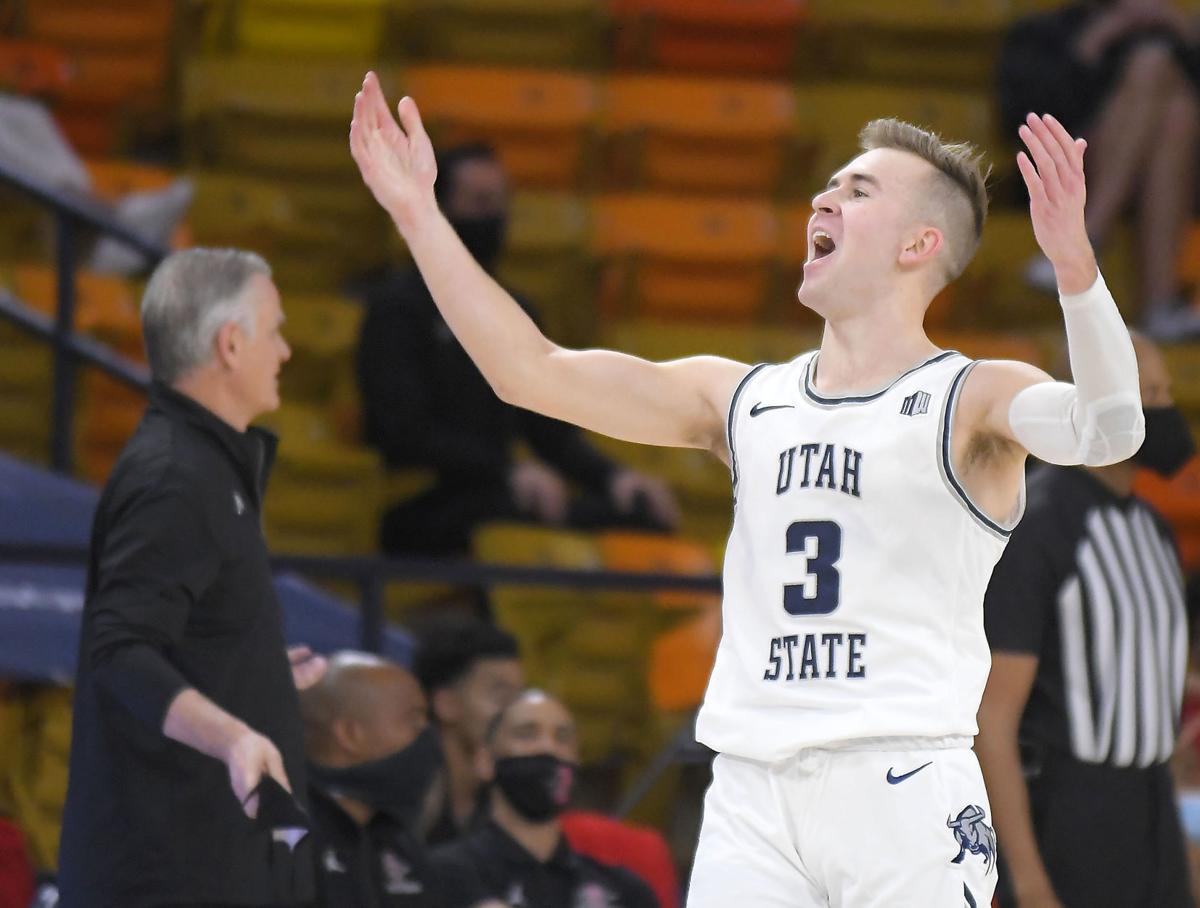 Utah State guard Steven Ashworth (3) celebrates as the San Diego State bench was called for a technical foul during the second half on Saturday. 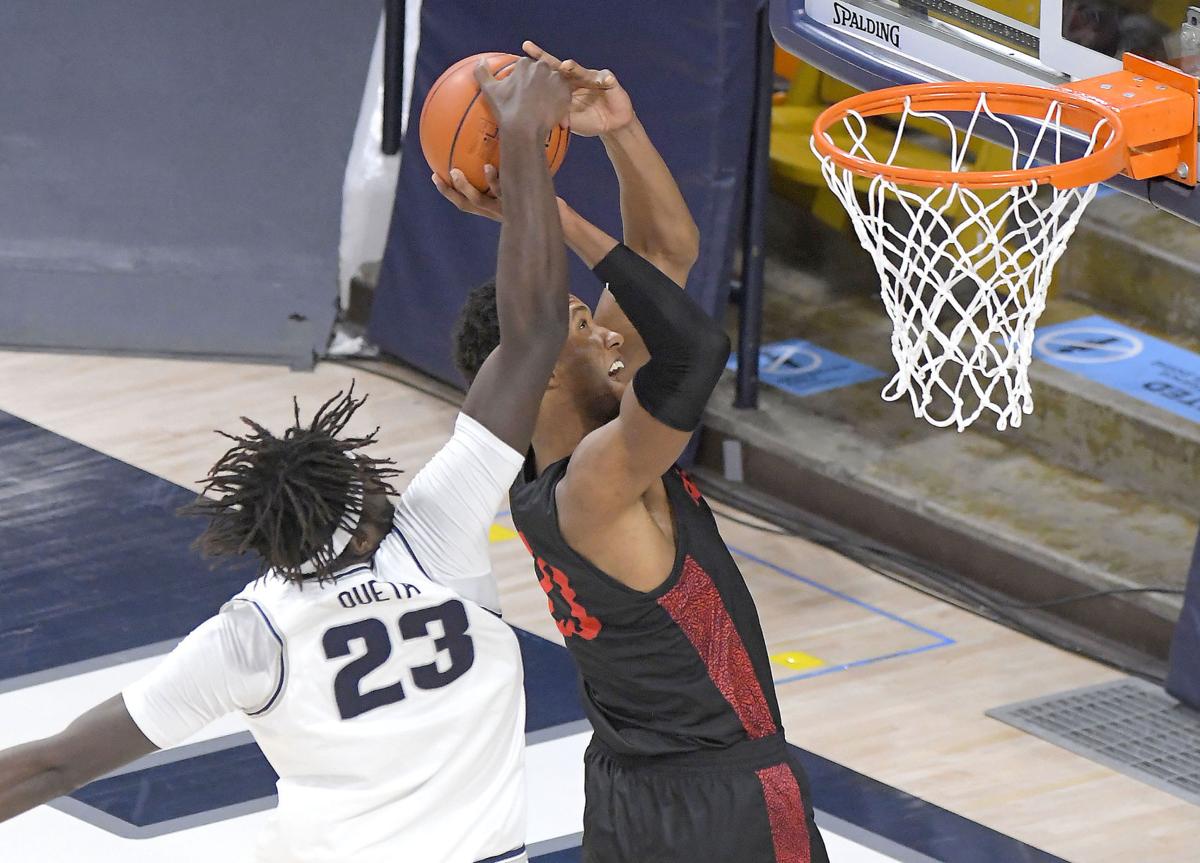 Utah State guard Steven Ashworth (3) celebrates as the San Diego State bench was called for a technical foul during the second half on Saturday.

It was not looking good for the Aggies early Saturday afternoon at the Dee Glen Smith Spectrum.

Hosting a short-handed San Diego State for the second of a two-game Mountain West Conference series, the Utah State men’s basketball team was in trouble. So was the Aggies’ winning streak.

The Aztecs, who were playing without all-league forward Matt Mitchell because of a knee injury, went to their bench midway through the opening half and got a huge spark. San Diego State outscored USU 19-3 over the last 8:30.

“San Diego State played really, really well and we knew they were going to,” Aggie head coach Craig Smith said. “They are a championship-level team for a reason. They are very good, play tough and are tough minded.”

Having enjoyed an early seven-point lead, the Aggies found themselves down 32-22 at halftime. The hosts had turned the ball over 12 times in the first half and made just 2 of 5 free throws. It was not the same team that had controlled the game on Thursday against the Aztecs and won, 57-45.

“We got off to a good start, but then we just weren’t good at any phase the last 10-12 minutes of the half,” Smith said. “Turnovers were just killing us. We had no pace on the offensive end. We had a deer-in-the-headlights look, and that is a credit to San Diego State. They were super aggressive and took us out of some of our stuff. They (Aztecs) smelled blood and then ramped it up another notch. ... We just couldn’t do anything right.

“We addressed that at halftime. Credit our guys for coming together.”

It took the Aggies just 3:30 to erase the 10-point deficit to start the second half. Then it was a dogfight the rest of the way. USU got to the free throw line and made 17 of 20 over the final 20 minutes, including 7 of 8 in the last 85 seconds. The Aggies notched their 10th straight win with a hard-fought 64-59 victory against the Aztecs.

“That first half was not what we anticipated or hoped for,” USU guard Steven Ashworth said. “The second half we came back with a good response. The crowd got behind us, and it was great to be in the Spectrum. It was a great team win.

“... Free throws were big for us tonight. To be able to go up and knock them down to end the game was huge. It was big time.”

Ashworth made all eight foul shots he took in the game, with them all coming in the second half. The freshman ended up scoring a game- and career-high 17 points off the bench.

“Steven was really good,” Smith said. “He is really settling in and figuring it out. Steven is a sponge and wants to learn. He doesn’t care about stats, just wants to play. He really impacted the game.”

Joining Ashworth in double-figure scoring was Brock Miller with 11 points and Neemias Queta with 10. Alphonso Anderson added nine points off the bench.

Queta filled up the stat sheet. The Aggie big man finished with a game-best 10 rebounds, blocked five shots to lead both teams and dished out a game-high four assists before fouling out with 2:27 to play.

“Neemi is playing at such a high level,” Smith said. “Look at the stat sheet. That is just incredible.”

The Aztecs (9-4, 3-3 MW) were led by Terrell Gomez and Lamont Butler with 16 and 13 points, respectively. They both came off the bench. Jordan Schakel netted 11 points.

Smith called Saturday’s game “a tale of two halves.” The Aggies (11-3, 8-0) found a way to win after so many blowout victories.

With some big help off the bench, Ashworth was asked about getting more playing time.

Utah State moved up to No. 43 in the NET rankings after the win, but on Monday checking at No. 45. San Diego State dropped to No. 44 after the loss, but on Monday was at No. 43. … The Aggies received a vote in The AP Top 25 that was released on Monday to come in at 40th. Boise State picked up 15 votes to come in at No. 34. ... The 10-game winning streak by the Aggies matches their longest under Smith as they also won 10 in a row during the 2018-19 season. … The Aggies won the rebound battle against the Aztecs, 39-32, and for the 14th straight game this season and are 63-11 under Smith when that happens. … USU is the first team to sweep its MW series against SDSU since the 2018-19 season when Fresno State accomplished the feat.. … Alphonso Anderson had a season-high seven rebounds. … Marco Anthony had a season-high two steals. … The Aztecs still lead the all-time series with the Aggies, 13-8.

Mitchell had a big scare Thursday night at the Spectrum.

Late in the game he took an awkward step and twisted his right knee. He lay on the court for some time before gingerly walking to the Aztec bench. Trainers from both teams attended to him, as well as the USU team doctor. After the game he left with an bag of ice taped to the knee.

Mitchell did not play on Saturday and will most likely to miss two weeks. The injury wasn’t as severe as originally though, but still will need rehab and strengthening before coming back to competition.

On Saturday during an interview, he took time to thank Utah State for the way he was helped and treated.

“Utah State did an amazing job helping me get the emergency MRI and making sure they knew what was wrong,” Mitchell said during a Zoom interview. “So, a big shoutout to the medical team at Utah State and a big thanks to them for everything that they did for me. They were on top of everything, so I really, really am grateful for that.”

Following the games Thursday and Saturday, many Aggie players conversed with Mitchell and wished him well.

Due to a positive COVID-19 case within the USU women’s program, the game at San Diego State on Saturday was postponed. The rescheduled date will be announced once finalized by the Mountain West and both schools.

This is the second time this season the Aggie women have had the second game of a series postponed because of the virus within the team. A road game against San Jose State back in December was also postponed.