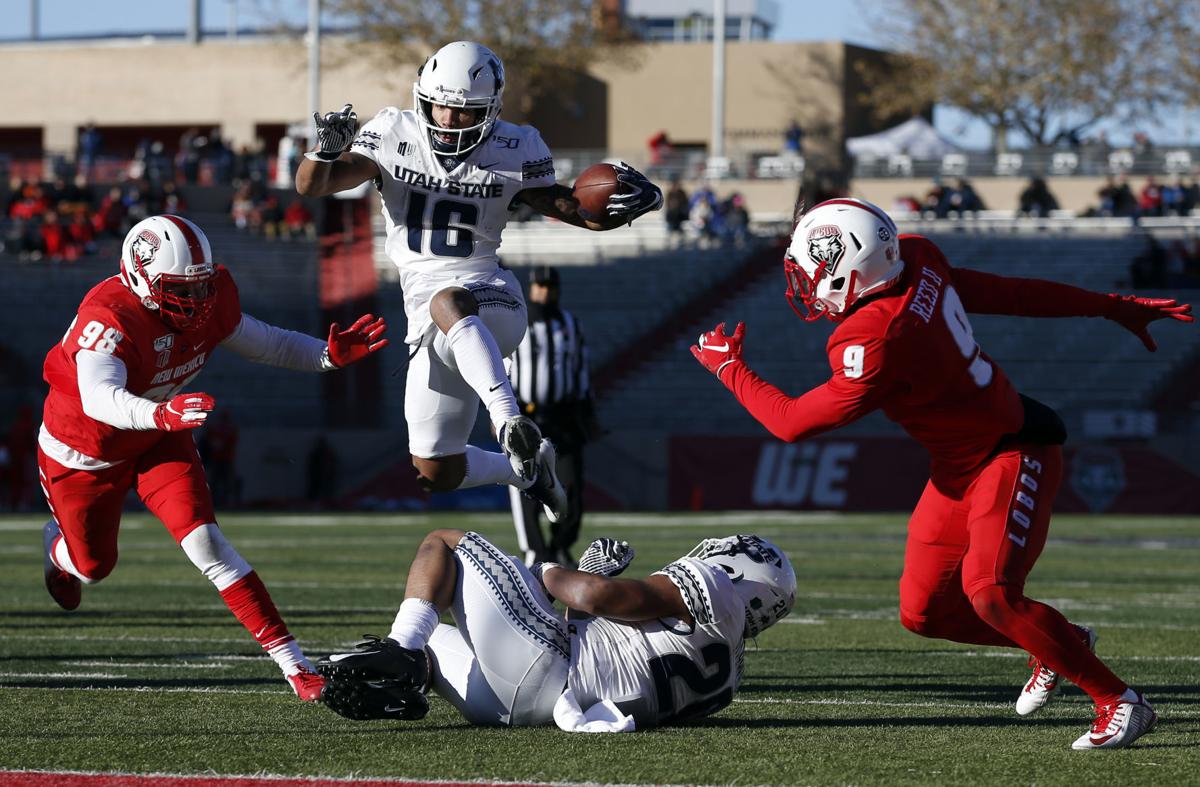 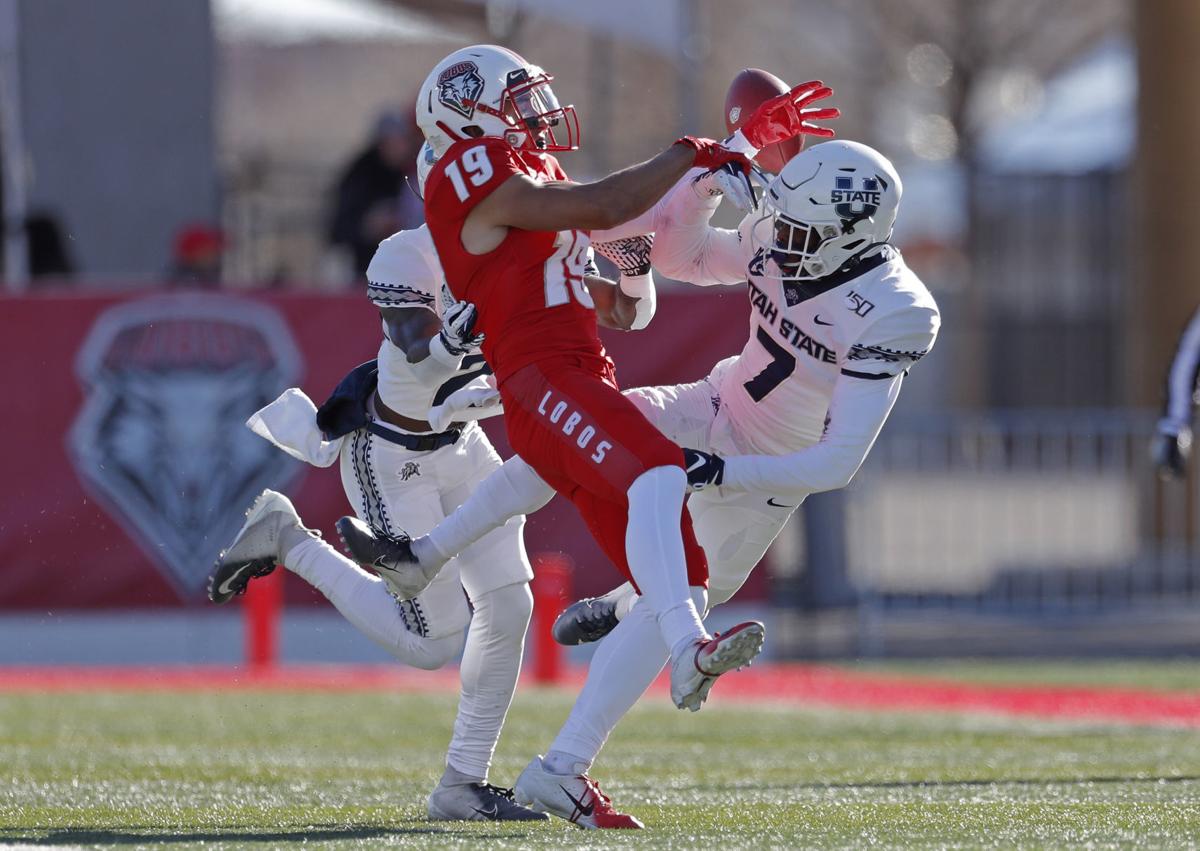 For the fourth time during the 2019 college football season, Utah State was able to bounce back from a loss.

The Aggies jumped out to a big halftime lead over New Mexico and overcame some nervy moments in the second half to secure a 38-25 victory over the Lobos last Saturday on a chilly and sometimes windy afternoon at Dreamstyle Stadium.

In the process, USU (7-5, 6-2 Mountain West) improved to 4-1 this season following a loss and guaranteed an invitation to a bowl game for the eighth time in the last nine years.

“We fell short of our major goal, but it is pretty darn good to be sitting where they are right now,” USU head coach Gary Andersen said. “We’ve had some times where we haven’t played well and we’ve had our issues in games. Those games are hard to swallow, and I understand that. But I’m proud. For this team to be 6-2 in the league, I’m very proud of them and for those seniors.

“These kids got seven victories and it is a huge thing to get to that spot. You are guaranteed a bowl game now. Don’t discount those times. I think that is a great accomplishment to get to another bowl game. These kids bounced back and battled from adverse situations and I’m proud of them.”

Both teams got off to a rocky start — the Lobos (2-10, 0-8) gained a measly 13 yards on 14 plays in the first quarter, while the Aggies only managed 16 total yards on their first three possessions — but USU caught fire in the second quarter. The visitors outscored the hosts 24-6 in the quarter to take a commanding 31-6 lead into the locker room. It was the most points the Aggies have scored in a single quarter this season.

USU had one lengthy drive to paydirt in the quarter, but took advantage of two New Mexico turnovers inside the Lobo 30-yard line during its scoring onslaught. The Lobos turned the ball over three times in the final 2:29 of the opening half, and two of those giveaways were unforced. USU defensive end Justus Te’i pounced on an errant UNM snap, and defensive tackle Christopher ’Unga recovered a fumble by redshirt freshman quarterback Trae Hall, who wasn’t even hit when he coughed up the ball.

For the first time in Mountain West play this season, the Aggies were extremely opportunistic in the red zone. All five of USU’s forays inside the UNM 20-yard line resulted in touchdowns.

Utah State outgained New Mexico 249-133 in the first half, but the second half was a struggle for the visitors on both sides of the ball. The Lobos enjoyed a substantial 250-119 edge in total offense over the final two quarters.

UNM found the end zone twice in a 3:30 span in the third quarter to pull to within 31-18. Three failed extra point attempts in the game — one was blocked by USU defensive end Jacoby Wildman, who also broke up a pass, had a tackle for loss and four solo tackles — prevented the hosts from shaving even more points off its deficit.

The Aggies took advantage of their only sustained drive of the second half to push their advantage to 38-18 late in the third quarter on wide receiver Siaosi Mariner’s eighth TD reception of the season. USU quarterback Jordan Love tossed TDs to three different targets in the contest as wideout Derek Wright and tight end Caleb Repp also hauled in catches in the end zone.

Love ended up completing 18 of 35 passes for 172 yards. The junior was intercepted once and lucky to not get another pass or two picked off, although he was unlucky when his sure-fire TD pass went through the arms of one of his wideouts.

Love now has 3,085 yards passing this year and joined Jose Fuentes as the only Aggies with two seasons of 3,000-plus yards through the air.

The Aggies ran the ball very efficiently and would have finished with more than 200 yards rushing had they not lost a combined nine yards in victory formation in the waning seconds of the game. USU amassed 196 yards on the ground, highlighted by Gerold Bright’s 113 yards on 19 carries.

Bright powered his way into the end zone from 1 yard out in the second quarter and now has 21 career rushing TDs, which puts him into a tie for eighth place in the USU record books. The senior also eclipsed the 2,000-yard rushing barrier during his career, and he is only the 10th Aggie to accomplish that feat.

For his efforts, Bright was selected as the America First Credit Union USU Student-Athlete of the Week. No. 1 also caught four passes for 14 yards against the Lobos and returned two kickoffs for 30 yards.

“The win is always great,” said Bright, who exceeded the century mark on the ground for the third time this season. “We needed this win so we could get a definite bowl game. As far as the 2,000 (rushing) mark, it’s pretty cool, but today I had a personal goal that I wanted to make and I fell short of that goal by 27 yards. So, I’m kind of upset about that. I have high expectations for myself.”

The Aggies scored twice on the ground against the Lobos, who ended their season on a nine-game skid and were the only Mountain West team to not win a league contest in 2019. Jordan Nathan received nice blocks from left tackle Alfred Edwards and tailback Jaylen Warren on a well-executed 11-yard fly sweep to paydirt in the second quarter.

“I’m proud of the way we ran the ball,” Andersen said. “It was great to see a young offensive line get into a spot to be able to make some plays in the run game to give us an opportunity to kind of control the game.”

It was an uneven offensive performance by both teams as USU failed to pick up a first down on five possessions, while UNM went 3 and out six times. The Lobos did rack up a season-high 276 rushing yards — one week after gaining 268 against Air Force — but only converted on 4 of 13 third downs and shot themselves in the foot with four turnovers.

USU’s defense now has 23 takeaways this season and helped create multiple turnovers for the seventh time in ’19. The Aggies are currently in a five-way tie for 12th place nationally in turnovers gained and are pulled even with San Jose State for the top spot in the Mountain West.

USU cornerback DJ Williams had a pair of big interceptions, including a diving one in the fourth quarter to ice the win. Four of the senior’s six INTs during his two seasons at Utah State have been recorded at Dreamstyle Stadium. No. 7 also picked off a pair of passes en route to being named the Defensive MVP at last year’s New Mexico Bowl.

Williams and the Aggies, who got nine tackles apiece from linebacker Eric Munoz and safety Shaq Bond, will find out their postseason destination this weekend.

• The Aggies won six conference games in a season for only the sixth time in program history.

• USU has won at least seven games for the sixth time in the last nine years.

• The Aggies have prevailed in 15 of their last 19 MW contests.

USU kicker Dominik Eberle was tabbed a honorable mention All-American by Pro Football Focus. The senior has split the uprights on 19 of 22 field goals attempts this season — he drilled a 45-yarder against the Lobos — and has been perfect on all 40 of his PATs.

UNLV quarterback Kenyon Oblad was named the Mountain West Offensive Player of the Week after competing 16 of 22 passes for 229 yards and a trio of TDs in the Rebels’ wild 33-30 overtime win at Nevada. The freshman completed 13 of his first 14 passes in a rivalry contest that was marred by a brawl after UNLV’s game-winning TD.

Air Force defensive back Jeremy Fejedelem was selected as the league’s Defensive POTW after finishing with 10 tackles and two INTs in the Falcons’ 20-6 triumph over visiting Wyoming. AFA turned both of the senior’s picks into field goals.

For the second straight week, San Diego State punter Brandon Heicklen garnered MW Special Teams POTW accolades. In SDSU’s 13-3 victory over visiting BYU, the senior pinned the Cougars inside their own 20-yard line five times and twice inside the 10. Heicklen also averaged an impressive 43.6 net yards on his seven punts.