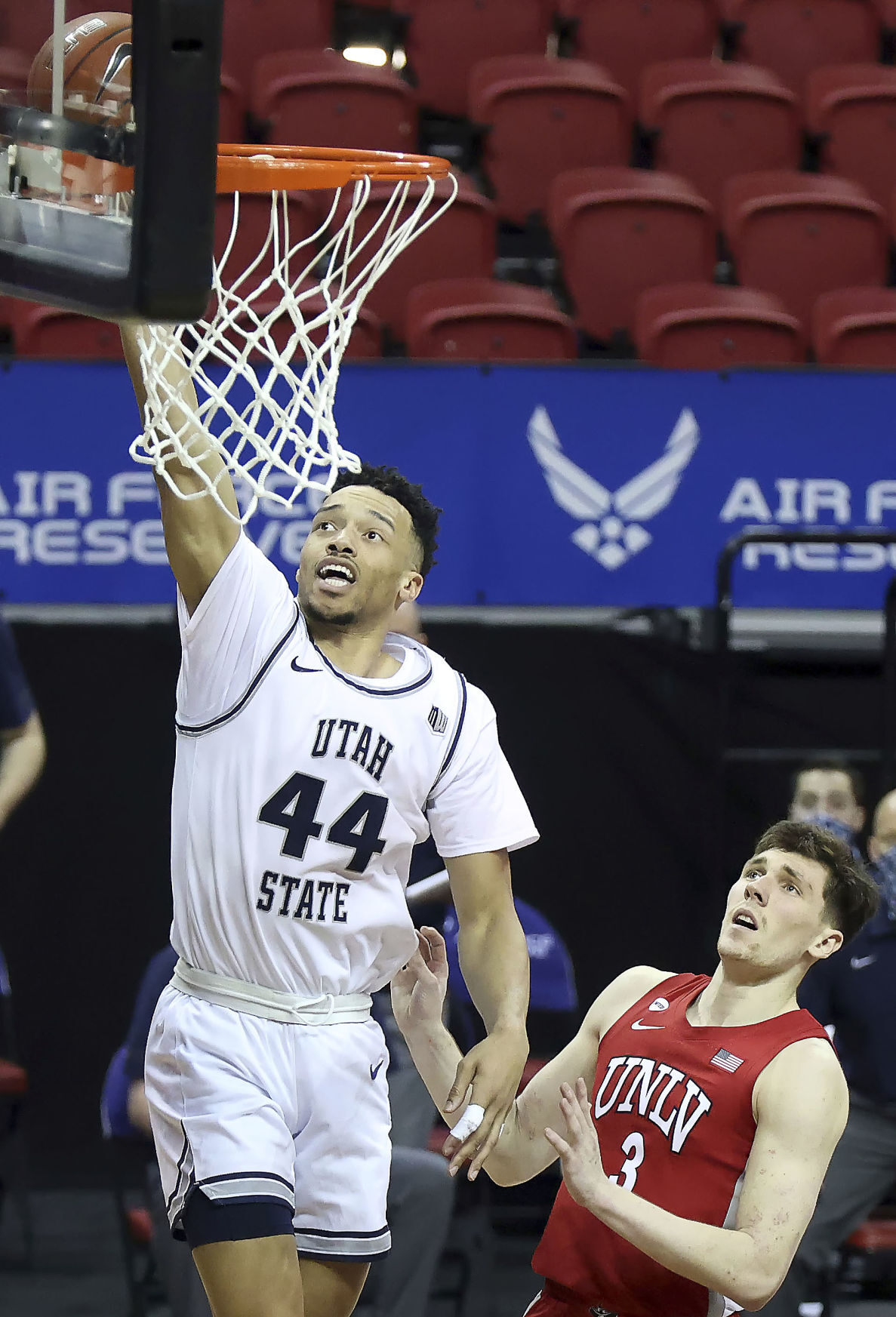 Utah State guard Marco Anthony (44) goes up for a shot as UNLV guard Caleb Grill defends in the second half Thursday night in Las Vegas. 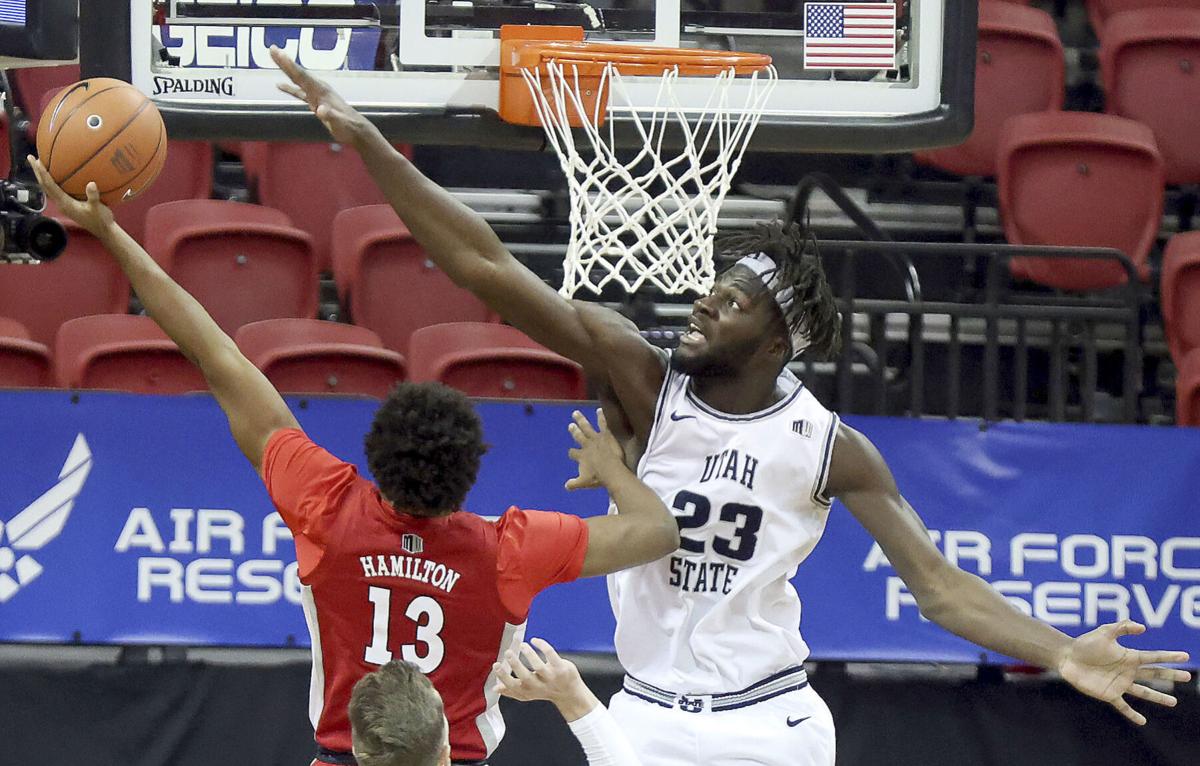 Utah State guard Marco Anthony (44) goes up for a shot as UNLV guard Caleb Grill defends in the second half Thursday night in Las Vegas.

LAS VEGAS -- A big second half was more than enough for the Aggies to advance to the semifinals of the 2021 Air Force Reserve Mountain West Basketball Championships.

Utah State fought through an ugly start Thursday night at the Thomas & Mack Center, but sparked over the final 20 minutes against seventh-seeded UNLV. The Aggie men’s basketball team is the second seed.

The Aggies scored the final six points of the first half and used a 15-6 run early in the second to get in front. They stayed there for a 74-53 win to advance to the semifinals for the fourth straight year.

“We started off pretty slow in the first half, but as it went on we started to pick up a little bit,” USU guard Marco Anthony said. “The meeting at halftime was about taking it up another notch, and we did that. It led us to the win against a very talented team.”

In other quarterfinal action Thursday, top-seeded San Diego State avoided the upset with a late surge for a 69-66 win over Wyoming. Fifth-seeded Nevada made it three in a row this season against fourth-seeded Boise State, 89-82. Third-seeded Colorado State beat sixth-seeded Fresno State in the late game, 72-62.

USU head coach Craig Smith felt like it took his team a half to get going. The Rebels (12-15) played Wednesday night and seemed looser to start the game than the Aggies (19-7).

“Our guys did a great job of self-correcting and really played connected in the second half,” Smith said. “We cleaned up the offensive end. In the first half we had eight turnovers, in the second half we had two. Five assists in the first half, then second half we have 13 assists. We played with a lot more purpose and we settled in. UNLV played last night. It’s their home arena. They have a comfort level, while we have a lot of guys who have never played in this tournament. We showed some tentativeness and didn’t execute things the way we normally do, then we really settled in in that second half.”

Boy did the Aggies. After shooting 32.1 percent from the field over the first 20 minutes, USU made its first six shots to start the second half. Anthony had a stretch of eight straight points, hitting a pair of 3-pointers. The Aggies made 55.9 percent of their shots in the second half.

“We just had to get things going,” said Anthony, who had his first double-double at USU with 15 points and a career-high 13 rebounds. “When we play connected, that’s when we play at our best. I really felt we started to do that in the second half and it showed on the scoreboard.”

“Marco (Anthony) had a heck of a game in every facet,” Smith said. “That’s what he does. He had 15 points and 13 rebounds - six of those offensive - and five assists. He’s such a dynamic player, was named to the all-defensive team and he takes a lot of pride in that. He did a great job on the defensive end again tonight, as did our whole team.”

Anthony did make the MW All-Defensive Team that was announced earlier in the week.

“It meant a lot, especially being the only guard on that list,” Anthony said of the accolade. “It’s very humbling and I feel honored to be a part of that prestigious list.”

Anthony had plenty of help Thursday night. Neemias Queta finished with a game-best 18 points and matched Anthony for the game high in rebounds with 13. It was the seventh straight double-double for the big man.

“I had to redeem myself after missing a dunk … that was bad, that was bad,” Anthony said when asked about matching Queta for rebounds.

“It was really a balanced attack on both sides of the ball,” Smith said.

The Rebels were led by Bryce Hamilton with 16 points. Edoardo Del Cadia came off the bench to add 10 points.

Hamilton scoured the first six Rebel points as UNLV built a 10-8 lead five minutes into the contest. The Aggies took their first lead of the opening half, 13-10, on a 3-pointer by Worster with 12:56 left in the first half.

Alphonos Anderson gave the Aggies their second lead, 16-15, with a trey at the 10:15 mark of the first 20 minutes. Then it was a long dry spell for the designated home team.

USU came up empty on 10 straight possessions over a span of 5:43 minutes. However, UNLV could not take full advantage. The Rebels scored six points to build a 21-16 lead.

Anthony, who had missed a dunk during the scoring drought and was hit with a technical for hanging on the rim, scored a rebound bucket to get the Aggies going offensively. USU scored the final six points of the half as the Rebels went scoreless for the final 2:15.

“It was a bit of a slow start, kind of a root canal for both teams on the offensive end,” Smith said. “Both teams defended really well.”

Brock Miller, who returned to the starting lineup after missing the last two games with a bad back, made his first shot of the game to start the second half. Miller also had a 3-pointer during the 15-6 run. Miller finished with eight points after missing his first four shots that all came in the first half.

“Keep shooting because he is such a great shooter,” said Anthony, when asked if anything was said to Miller. “He can’t think about it. We believe in him and trust him. He has proved he can hit shots and did in the second half.”

Another Miller trey and a free throw by Queta made it a 10-point lead. The Aggies used a 6-0 run and then an 8-0 surge, where Quera scored six straight points at the foul line, to take firm control. Worster drove in for a layup to make it 67-46 with 3:39 left in the game.

Sean Bairstow gave USU its largest lead, 72-49, with a jumper in 1:06 to play. It was the fifth straight win for the Aggies and keeps Smith perfect in the MW Tournament at 7-0.

“We’re happy to win,” Smith said. “It’s survive and advance at this time of year, and we’re looking forward to playing another game tomorrow, whether it's against Fresno State or Colorado State.”

Utah State began the day at No. 49 in the NET rankings, while UNLV checked in at No. 175. … The Aggies won the rebound battle, 45-32, for the 26th straight game this season - which is every game this year - and are 71-15 under head coach Craig Smith when that happens. … USU had 11 offensive rebounds to record double-digit boards on the offensive end for the 22nd time this year. … Neemias Queta moved into a tie with Justin Bean for fourth on the career 10-rebound list with 35 games. ... The Rebels still lead the all-time series with the Aggies, 34-11.

Several worthy candidates for the ball. Marco Anthony gets the nod, even after picking up a technical in the first half. The junior had his first double-double as an Aggie with 15 points and a game-high tying 13 rebounds, six of which came on the offensive end. He was 6 of 12 from the field, including 2 of 3 from 3-point range. Anthony also had five assists, two steals and blocked a shot in 36 minutes of action.

There were no dunks over the first 20 minutes of the game.

The first slam of the day was one for the highlight shows. Neemias Queta took an alley-oop pass from Steven Ashworth and threw it down at the 14:37 mark. That would be the lone dunk of the game.

The Aggies will play Friday evening in the semifinals of the tournament at the Thomas & Mack Center on the campus of UNLV. USU will take on Colorado State (18-5) at 10 p.m. The Rams and Aggies split during the regular season. The game will be broadcast on CBS Sports Network.