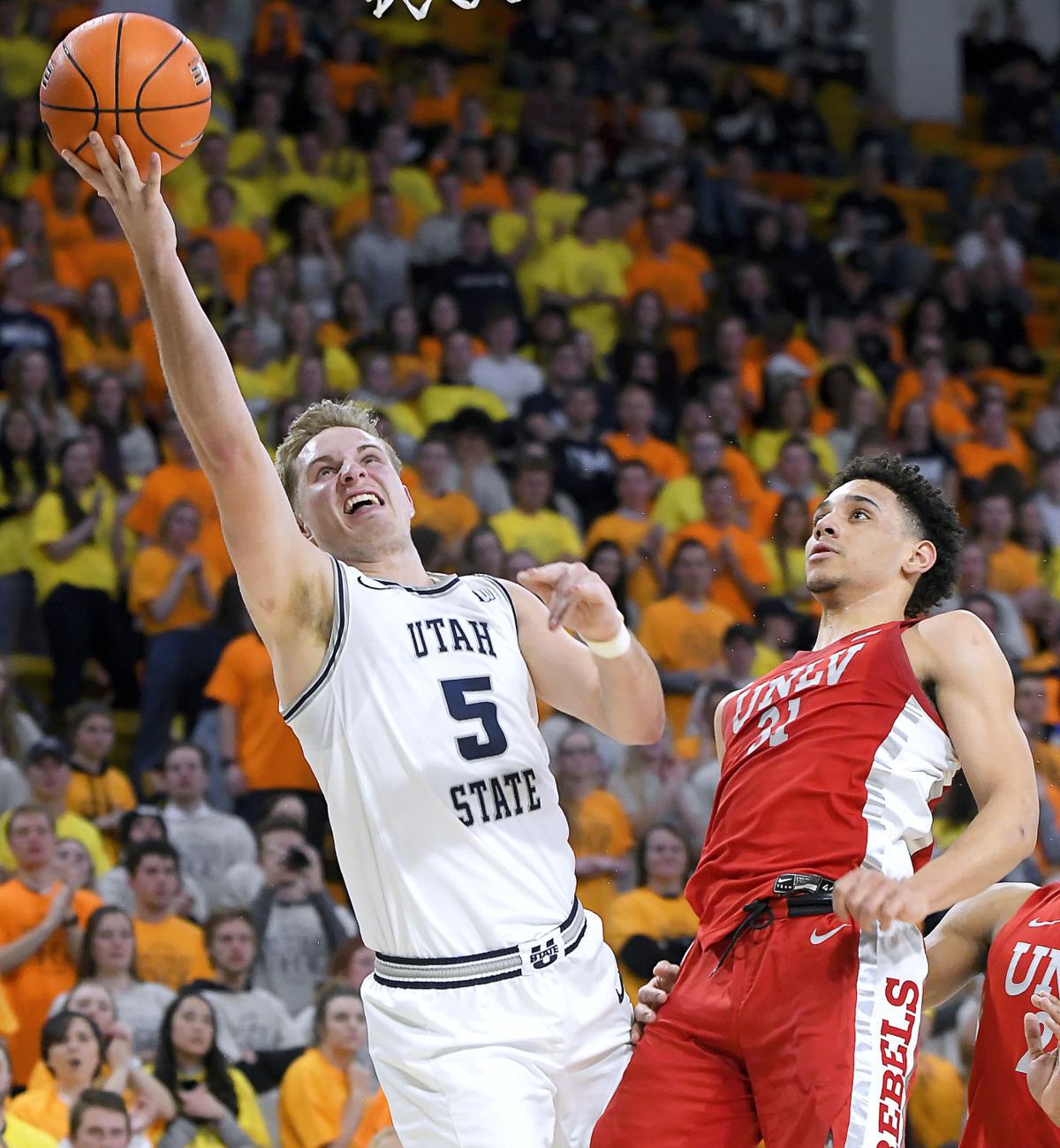 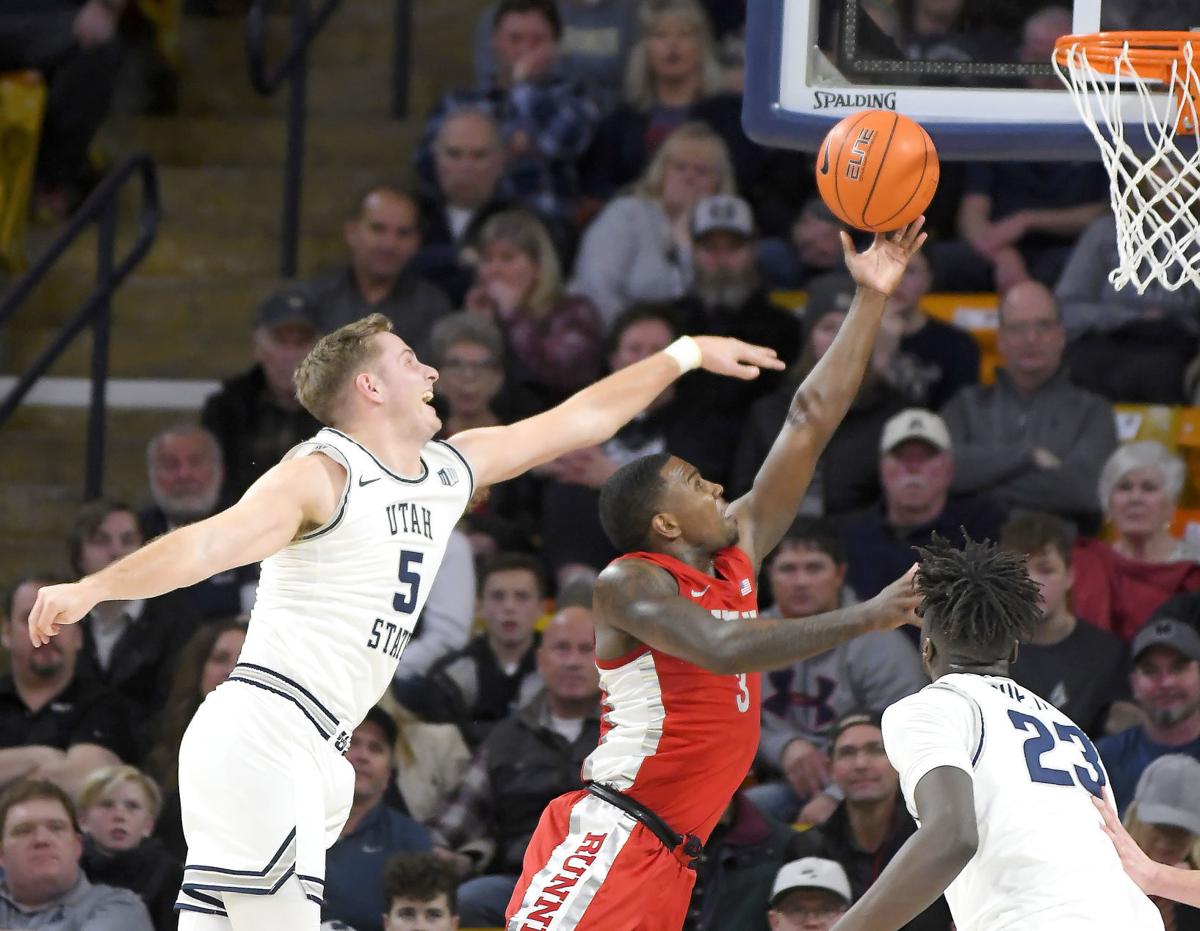 On Spectrum Magic Night, the Aggies needed a little.

Utah State rallied from being down eight points in the second half against UNLV to pick up a much needed Mountain West men’s basketball win Wednesday night at the Dee Glen Smith Spectrum.

"Great environment tonight on Spectrum Magic night, I want to thank all the fans for coming out," USU head coach Craig Smith said. "Our student body was amazing. It was electric there in the second half, and we finally gave them something to cheer about."

"That's quite a stat line," Smith said of Queta. "He is close to getting all the way back to the way he was playing last season."

Queta agreed, saying he is really close to being 100 percent. He also felt defense was the key.

Sam Merrill got hot when USU needed him and added 20 points as he has now scored in double figures in all seven games of his career against the Runnin’ Rebels (11-13, 6-5). During the deciding stretch that included the two runs, Merrill scored 14 of the Aggies' 19 points.

“Really, really good atmosphere again, the students really brought it," Merrill said. "That really helped us out in the second half. First half was similar to what happened down at their place the first game. We let their athleticism and their pressure defense get to us a little bit. The ball got sticky. In the second half we really started moving the ball and got it inside to Neemi (Queta) and defended really well. That was a tough game for us and showed how tough we are as a team.”

The win moves the Aggies into a tie for fourth in the crowded league standings.

Justin Bean had a game-best 11 rebounds.

After falling behind 5-2 to start the game, the Aggies used a 9-0 run as the Rebels went more than four minutes without scoring. Merrill capped the surge with a bucket in traffic to give the hosts a 11-5 lead with 14 minutes left in the opening half.

Then it was USU’s turn to struggle to score. The Aggies went more than five minutes without a point as the Rebels matched the USU run with nine unanswered points. Marvin Coleman hit a 3-pointer to put the Rebels in front, 14-11.

The Aggies took the lead back with six straight points as a full-court press allowed Merrill to make a steal under the basket, and he quickly scored to give USU a 21-19 lead with 6:10 left in the first half.

But just like the 9-0 run earlier, UNLV took its turn to match the six straight points as USU went cold again from the field. The Aggies went 3:38 between points. The Rebels took a 25-21 lead off a Hamilton bucket with 2:49 left in the first half.

Diogo Brito hit his second 3-pointer of the first half as USU scored six straight once again. However, UNLV finished the first 20 minutes by scoring four unanswered points and took a 29-27 lead into the break.

"I lost my mind a little with the team at halftime," Smith said.

The Rebels started the second half with six straight points as the Aggies had two quick turnovers, and Merrill was mugged twice driving to the basket, but nothing was called. UNLV took a 35-27 lead with 18 minutes left in the contest.

After going more than four minutes without scoring from the first half to the second, Queta scored inside. Despite missing a trio of free throws, the Aggies clawed back to take the lead.

"It was almost like two different games," Smith said. "... We outscored them 42-19 in the last 17 minutes of the game. We were down eight at our timeout. I thought our guys played with great poise and great confidence and great tenacity from there on out."

Once USU got in front, it just kept on pushing on the gas pedal. The 54 points by UNLV is a lowest output this season in MW play and second lowest overall.

"It was a tough-fought win, as almost every game in Mountain West play is this year," Smith said. "It’s a dog fight every night and we’re happy to come out on top.”

The Aggies started the day at No. 55 in the NET rankings, while the Runnin’ Rebels were at No. 132. … UNLV holds the NCAA record for the most consecutive games with at least one 3-pointer with 1,094 games since the 3-point shot was adopted prior to the 1986-87 season. The Runnin’ Rebels and Princeton are the only schools to make a trey in every game since it was introduced. … USU is 17-2 this season when it outrebounds the opponent as the Aggies won the rebound battle, 34-28. ... Merrill scored in double figures for the 16th straight time this year, 22nd time this season and 99th time in his career. He moved into a tie with Lance Washington (118) for eighth on the career steals list with three Wednesday night. Merrill also tied Tony Brown (686) for second on the career 3-point field goal attempts list with eight … The Rebels are one of just three MW teams that lead an all-time series with the Aggies, 33-9, but USU has won four in a row at home now.

Merrill was named a finalist for the Senior CLASS Award on Wednesday. Merrill is one of just 10 men’s basketball players in the nation named to the final list.

To be eligible for the award, a student-athlete must be classified as an NCAA Division I senior and have notable achievements in four areas of excellence: Community, classroom, character and competition. An acronym for Celebrating Loyalty and Achievement for Staying in School, the Senior CLASS Award focuses on the total student-athlete and encourages students to use their platform in athletics to make a positive impact as leaders in their communities.

Nationwide fan voting begins immediately to help select the winner. Fans are encouraged to submit their votes through the Senior CLASS award website at seniorCLASSaward.com.

This goes to the 7-foot sophomore. Neemias Queta was really big when needed as he finished with a game-best 21 points on 8 of 11 shooting from the field and 5 of 7 from the foul line. The center also grabbed six rebounds, dished out five assists and blocked two shots in 36 minutes of action.

The Aggies did not record a dunk in the first half.

Queta got the first dunk of the game with 9:07 to play off a pass from Brock Miller. Queta would add two more in the closing minutes, while Diogo Brito got a breakaway slam.

The Aggies stay at home and host Boise State (16-8, 8-4) on Saturday at 8 p.m. The Broncos won at Wyoming on Tuesday, 67-62, rallying in the second half. In the first meeting this season with Boise State, the Broncos mounted a big comeback in the final three-and-a-half minutes to force overtime and won, 88-83.