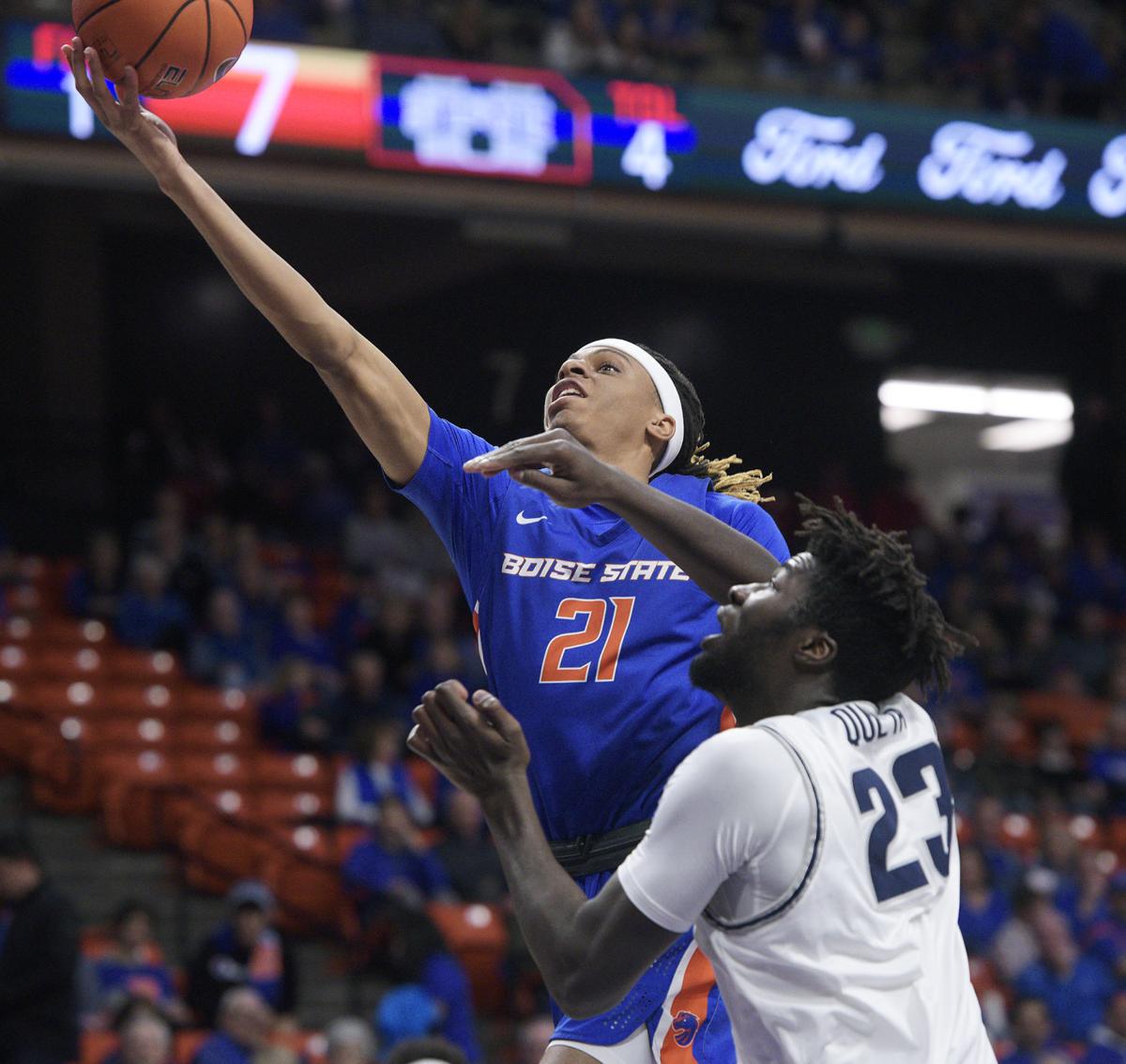 Boise State guard Derrick Alston (21) makes a layup during the game against Utah State on Saturday, Jan. 18, 2020 at ExtraMile Arena in Boise. 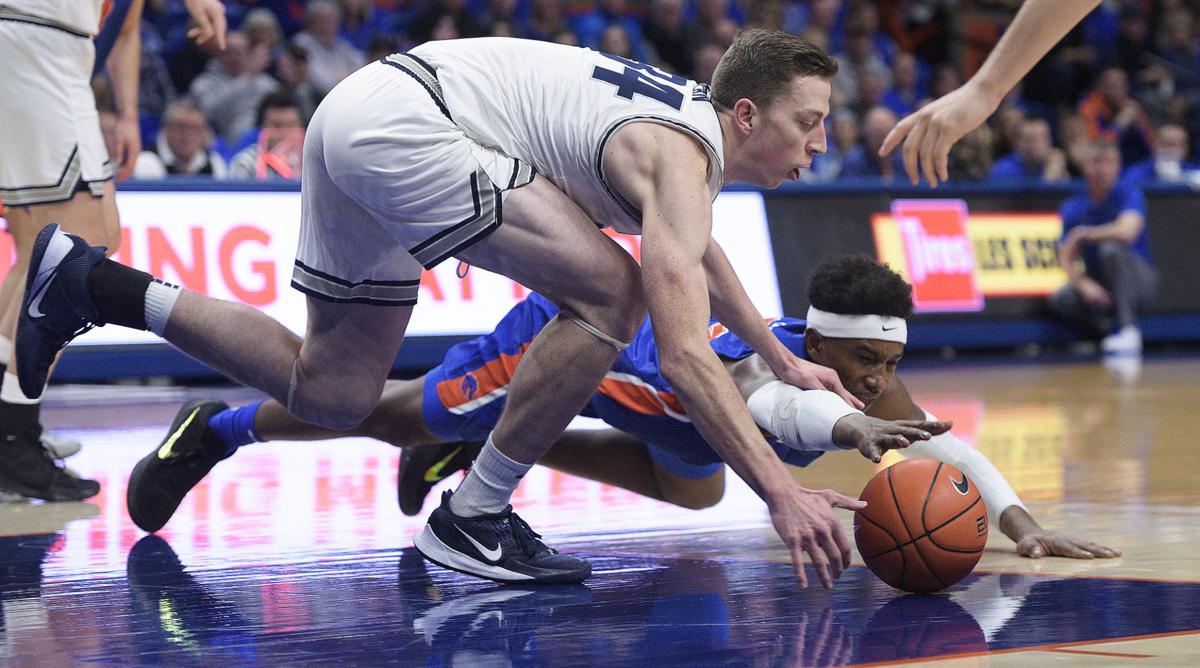 Boise State forward Abu Kigab (24) and Utah State forward Justin Bean (34) dive for the ball during the game on Saturday, Jan. 18, 2020 at ExtraMile Arena in Boise.

Boise State guard Derrick Alston (21) makes a layup during the game against Utah State on Saturday, Jan. 18, 2020 at ExtraMile Arena in Boise.

Boise State forward Abu Kigab (24) and Utah State forward Justin Bean (34) dive for the ball during the game on Saturday, Jan. 18, 2020 at ExtraMile Arena in Boise.

What a stunner for the Aggies late Saturday night at ExtraMile Arena.

Utah State let a 18-point lead with 4:12 minutes to play in regulation get away in a Mountain West men’s basketball game thriller. Boise State used a late rally to force overtime and took its first lead of the game in the extra period.

The Broncos then went on to control the five minutes in OT and pulled off a wild 88-83 win.

“Well, a really disappointing finish obviously,” USU head coach Craig Smith said. “You got to credit Boise for making an unbelievable run and making every single play down the stretch. We messed some things up, but you have to give them (Broncos) credit. They just made a ton of plays.”

Then it happened. Boise State (12-8, 4-4) turned the ball over to freshman guard RayJ Dennis. In the final three-and-a-half minutes of regulation, he came to life. In fact, Dennis couldn’t miss.

Dennis had eight points during a 14-0 run by the Broncos. He wasn’t done as he would end up scoring 19 points before the overtime.

“No. 10 ((Dennis) played hard as did the other guys they had out there,” Smith said. “... Those young guys made some plays for them and the crowd that stuck around got going.”

Sam Merrill stopped the bleeding momentarily with a pair of free throws with 50 seconds to play as USU held a 68-62 lead. But Dennis hit another 3-pointer, drove in for a dunk, was fouled taking a 3-point shot and made all three foul shots.

Still, with 8.5 seconds to play, the Aggies held a 75-70 lead when Abel Porter made a pair of foul shots. But the Broncos just kept coming.

Dennis hit his fourth trey of the game with three ticks on the clock, and Justinian Jessup stole the inbound pass and scored with a second to play to knot the game up for the first time since the opening tip. The Aggies had six of their season-high 18 turnovers in the final 3:30.

“We had some senseless turnovers against the press,” Smith said. “We gave up 25 points in roughly the last three-and-a-half minutes of the game. … It’s easy to look back and say one stop here, one less turnover here changes the whole thing. It was about the perfect script for them. We lost our poise.”

USU missed its first two shots in OT, and Jessup completed a three-point play to give the Broncos their first lead of the game. They would not give it up as the Aggies wilted. It was the eighth straight win at home for Boise State, which snapped a three-game losing streak to USU.

The loss ruined a big game by Merrill. The senior finished with a game and season-best 30 points on 9 of 19 shooting.

“He carried us,” Smith said of Merrill. “I thought we had a good effort all the way around, but he (Merrill) had that look in his eye and was moving a lot better. This is the healthiest he has been since the first six games of the season.”

“Certainly Neemias fouling out changed the complexion of the game,” Smith said. “We said in the timeout right before he fouled out that we had worked too hard, too long. We have to finish this game. It’s not over, until it’s over.”

Bean had his 11th double-double of the season as he grabbed a game-best 10 boards.

The Broncos were led by Dennis and Derrick Alston with 19 points each. Jessup added 15 points, and RJ Williams netted 12.

The Aggies scored the first nine points of the game and jumped out to a 14-2 lead less than four minutes into the contest. All five USU starters scored in the early going.

However, three minutes later the Aggies put together their own 7-0 run to get back up by 12. Merrill hit a jumper and a 3-pointer, while Bean swooped in for a layup off a pass from Porter to give the visitors a 23-11 lead with 9:28 before the break.

It got worse for the hosts. Boise State went nearly five minutes between field goals and made just four free throws during that timespan.

The Aggie bench made its presence felt as Brito and Alphonso Anderson combined for nine points during a 13-4 stretch for USU. Merrill gave the Aggies their largest lead of the first half, 38-19, with a driving layup with 2:21 left. USU would not score again before halftime.

The Broncos ended their field-goal drought with a pair of 3-pointers. The Aggies took a 38-25 lead into the locker room.

Boise State scored the first six points of the second half as USU went 5:45 without scoring from the end of the first half into the second. The Broncos got within 38-31 with 17 minutes to play.

Queta scored off a nice pass from Porter to end the drought and was fouled. The Aggie big man missed the free throw, but Brock Miller was there for the rebound putback as USU went back up by double digits.

But it soon got ugly for the Aggies.

“This is a learning experience, but we can’t let this bog us down,” Smith said. “We have to learn and grow from it, and have poise and confidence.

The Aggies started the day at No. 81 in the NET rankings, while the Broncos were at No. 120. … Former USU head coach Tim Duryea who was also an assistant for 14 years with the Aggies, is an assistant coach at Boise State an in charge of the Broncos offense . … The Aggies fell to 9-1 this year and 25-3 under Smith when scoring at least 80 points. … USU is 13-2 this season when it outrebounds an opponent as the Aggies won the rebound battle, 39-32. ... Merrill played in his 117th game at USU, moving into a tie with Eric Franson, Dan Conway and Gilbert Pete for 11th on the career list. He also moved up on the career minutes played list, passing Tony Brown (3,841) and into fourth with 3,870. … The Aggies still lead the all-time series with the Broncos, 33-16.

Who else but the Bronco hero. Dennis started but didn’t take a shot until the end. He didn’t miss once he started. The guard hit all five of his shots, including four from long range, and made all five of his free throw attempts to finish with a career-high 19 points. Dennis also grabbed a rebound and dished out three assists in 18 minutes of action.

Queta got it started when Merrill found him all alone under the basket for a two-handed jam early in the contest. That would end up being the lone dunk of the first 20 minutes and the game.