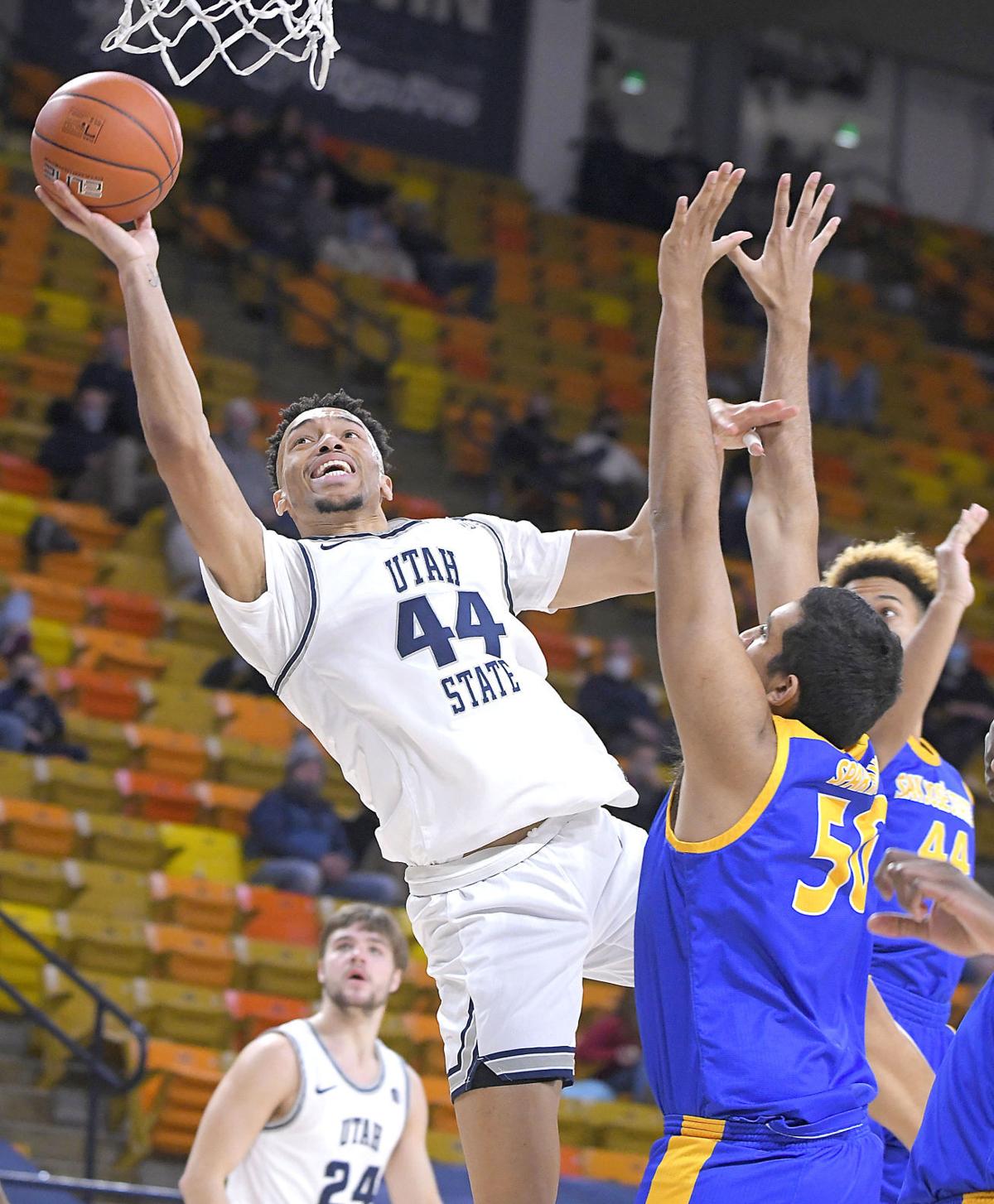 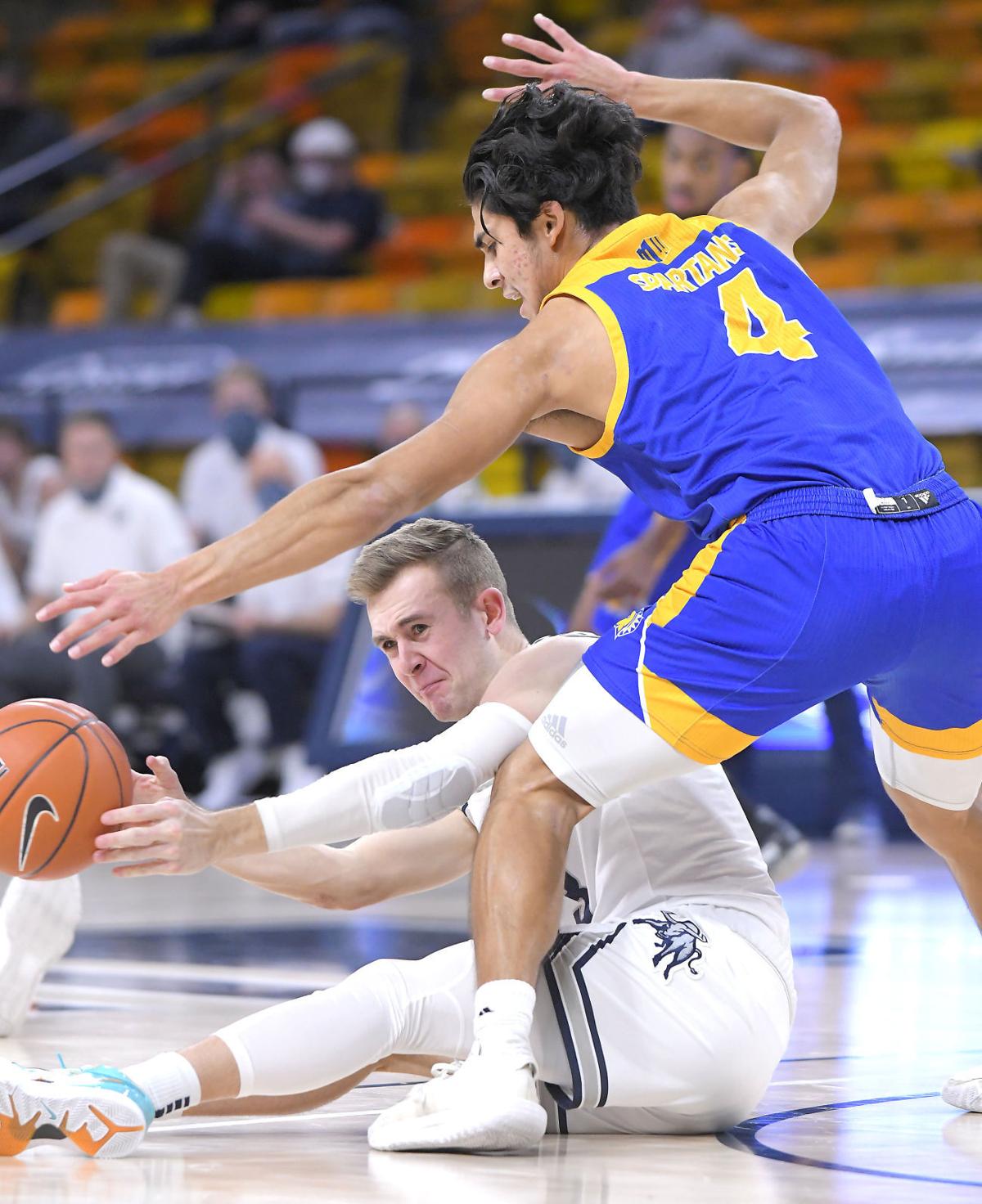 It wasn’t a 45-point blowout, but the Aggies rolled over the Spartans Wednesday night in the Dee Glen Smith Spectrum in the second of a two-game series to open Mountain West Conference play. The Utah State men’s basketball team used a 20-2 start to the second half to cruise by San Jose State 85-52 In front of 1,151 fans.

“Our guys took care of business this week,” Aggie head coach Craig Smith said. “I’m really proud of how we played and the effort our guys played with. I thought we defended very well in both games. We were really focused and played connected on both ends of the floor. I don’t care who you play, when you hold a team to 23 percent from the field and 20 percent from the 3-point line, you’re doing something really well.”

The answer was not much changed. It was a bit closer at halftime than the first game, but USU quickly made sure it was another victory for the hosts with the strong start to the second half. This marked the 30th straight win for the Aggies over the Spartans in the Spectrum.

“Overall, I think we did a really good job of shutting them out defensively,” USU center Neemias Queta said. “... We’ve just got to keep playing defense as hard as we’ve been playing if we want to be at the top of the Mountain West. We have to keep playing defense like we have the last four or five games. That’s a big key for us.”

“We shared the ball a lot,” Queta said. “We’ve been improving a lot on the assist to turnover ratio, that has been a big key for us to keep getting better. Everybody played really well and shared the ball. That’s one of the key points for us to be where we want to be.”

The Aggies finished with 19 assists on 30 made field goals and had 13 turnovers. A handful of those turnovers came in the final minutes when players deep down the bench were in.

“I thought our whole team was really good, but (Neemias) Queta really controlled the paint, really connected the game at a high level,” Smith said. “He had six blocks, nine points, four assists and 11 rebounds in 20 minutes. I would say that’s very efficient. Of course (Justin) Bean again with 12 rebounds. He didn’t shoot it quite as well tonight, part of that is I didn’t help him enough. I thought our guards defended hard. We had a few foul issues we had to negotiate. (Sean) Bairstow came off the bench and was very good. Stephen Ashworth was very good, played with great pace. We put the game out of reach when he came in, and I thought his pace really made a difference.”

Richard Washington, who did not start despite being the leading scorer for SJSU and one of the top scorers in the country, came off the bench to lead the Spartans with 11 points.

“I think Utah State is a really solid team,” SJSU head coach Jean Prioleau said. “They’re a really good team, they’re a big team. They outrebounded us again. I thought our guys played harder for the majority of the game than they did the first night. It was really sloppy in the last five minutes, both teams were just turning the ball over and the game was pretty much out of hand. We depend a lot on our big three, and it just wasn’t going tonight.”

Unlike the first meeting, the Spartans did not enjoy a lead in the early going. They tied the game at 3-3 when Sebastian Mendoza hit a 3-pointer.

However, the Aggies quickly responded with a 10-0 run. Miller scored a quick five points, including a 3-pointer that was followed by a trey from Worster. Bean made it 13-3 with a jumper with 14:21 left in the opening half. SJSU had seven fouls five-and-a-half minutes into the contest.

Later in the first half USU got two more shots to drop from long distance that sparked a 10-3 surge. Alphonso Anderson hit one, while the second came from Worster to give the hosts a 29-13 lead with 7:19 left in the half.

A Worster bucket and a pair of free throws from Anthony gave the Aggies their largest lead in the first half, 35-17, at the 5:19 mark. USU took a 42-25 lead into the break as nine of the 10 athletes that saw action scored.

The Aggies scored four quick points to start the second half. Then after one free throw by the visitors, USU reeled off 13 unanswered points to take a commanding 59-26 lead with 13 minutes to play. It was time for the Aggie reserves to get some action for most of the rest of the game.

The Spartans did string together nine straight points to get within 70-46 with 6:37 to play. But the Aggies responded with a 10-2 surge as four USU players scored to put the final nail in the coffin.

“We have played really well now for a few games,” Smith said. “We will take a break and get back after it next week.”

The Aggies starting lineup was back to how they started the season: Marco Anthony, Rollie Worster, Brock Miller, Justin Bean and Neemias Queta. … USU held San Jose State to 23.4 percent shooting from the field and 20 percent from 3-point land, both season lows by an opponent. … The Aggies won the rebound battle, 54-44, for the eighth straight game this season. … USU played all 15 players that dressed and 11 of them scored. … The Aggies had a season-high 10 blocked shots, which is tied for the third-most in a single game in school history and most by a USU team since 2014. … The Aggies lead the all-time series with the Spartans, 66-22, and are 38-4 in the Spectrum against SJSU.

The women’s team was supposed to conclude it’s two-game series with San Jose State in Phoenix Wednesday afternoon. However, it didn’t happen.

The Mountain West Conference released the reason why late Wednesday morning: “Due to COVID-19 issues within the Utah State women’s basketball program, the series finale between the Aggies and San José State scheduled for Dec. 23 has been postponed. The rescheduled date will be announced once finalized by the Mountain West and both institutions.”

Junior forward Justin Bean has pulled down 10 or more rebounds in four contests this year bringing his career total to 29 games with double-digit rebounds before Wednesday’s outing. Bean started the night tied with Spencer Nelson for ninth on the career list for double-figure rebound games. Coincidentally, Nelson is the coach who recruited Bean to USU.

Take your pick as many Aggies contributed to the blowout. Neemias Queta gets the nod as he once again tied his career high with six blocked shots. The senior also had nine points, 11 rebounds and four assists in 20 minutes of action.

After eight dunks on Monday, USU had three on Wednesday.

Neemias Queta got the dunking started Wednesday with a one-handed throw down off a pass from Rollie Worster late in the first half. It was the lone dunk of the first 20 minutes.

Worster found Queta again early in the second half, and the big man rewarded the guard with the nifty pass with a one-hand jam and was fouled. He did make the foul shot. Szymon Zapala recorded the final dunk in the closing seconds.

The Aggies take a week off before ending 2020 with a road conference game at Air Force on New Year’s Eve. The Falcons (3-3, 1-1) split a league series last week with Nevada. Tipoff at the Air Force Academy will be at 2 p.m., and the game will be broadcast on CBS Sports Network.