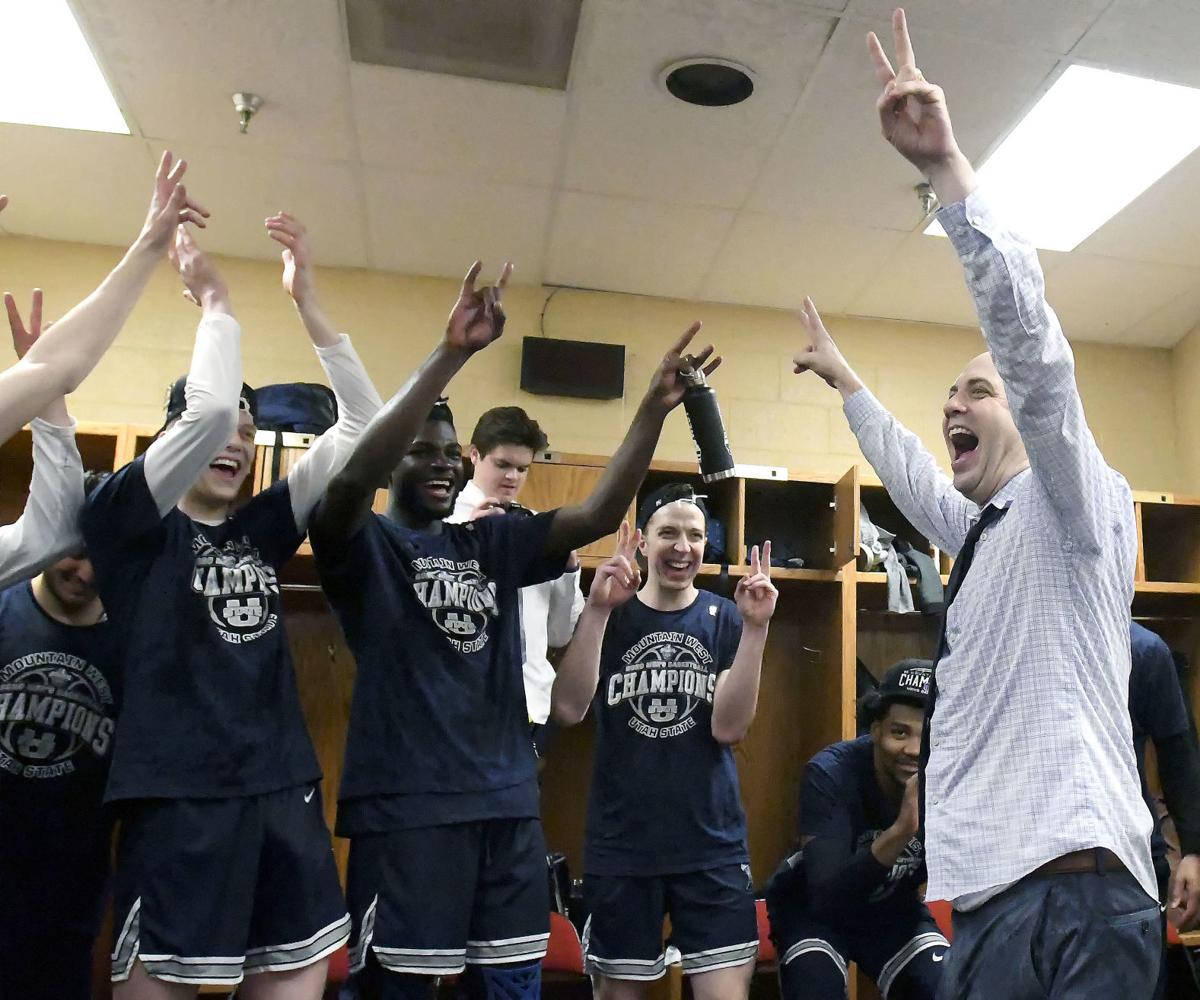 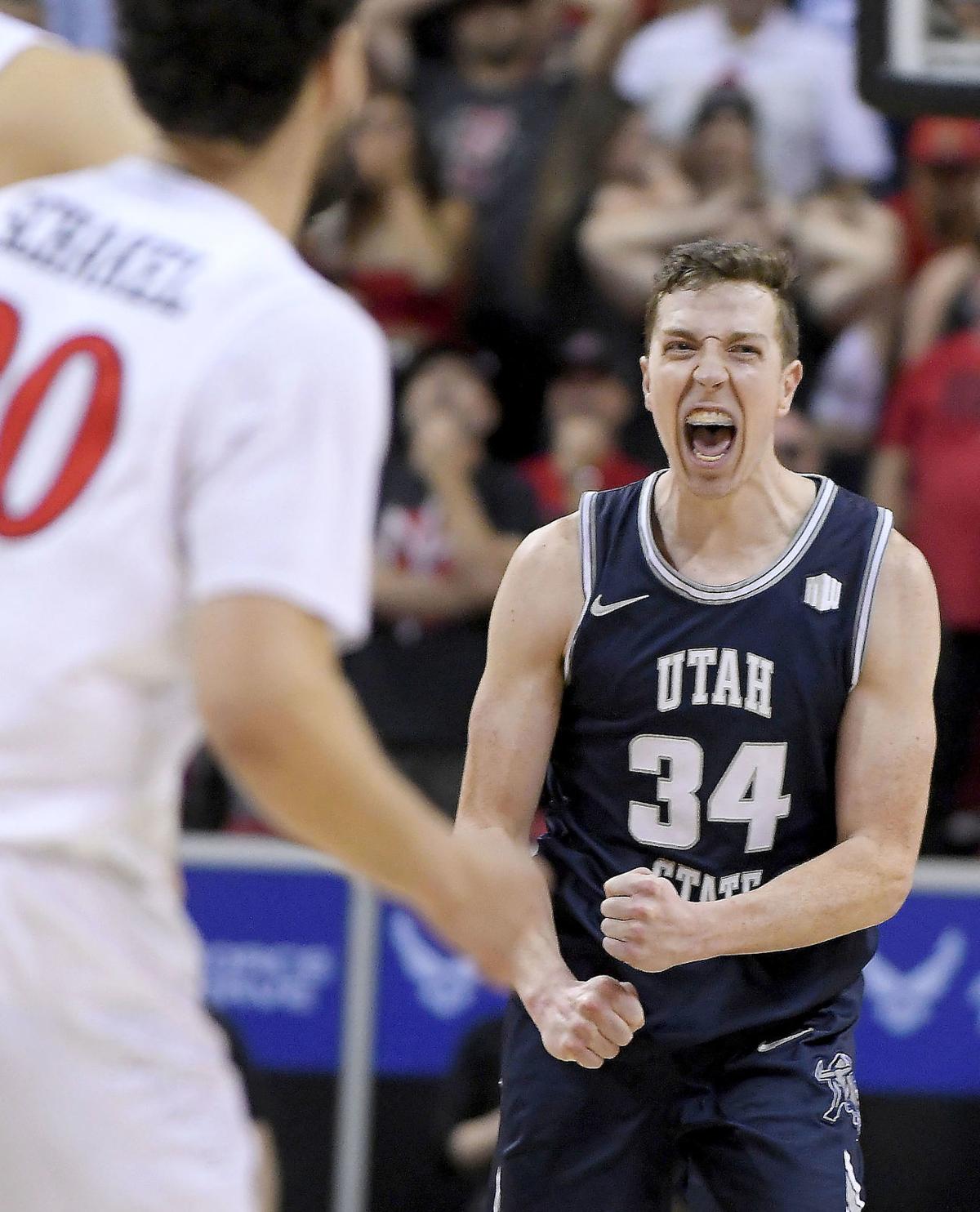 If you follow any of the virtual March Madness or, as some are calling it, March Sadness, then you know the Aggies won their first-round game in the NCAA Tournament.

Yes, the Big Dance lives on with different websites playing out the tournament online.

While sports-starved fans need something to entertain themselves, the athletes and coaches of the Utah State men’s basketball team have mixed reactions to these mock brackets. The plug was pulled on the real NCAA Tournament just over a week ago when the coronavirus became a global pandemic.

“It’s more painful to see that,” Aggie forward Justin Bean said. “We’re pretty humbled by it, but at the end of the day those are just predictions. You can’t do anything about it. It just makes you want to get out there even more and prove those guys right. Those are hard for me. I don’t dive into where we would have ended up.”

“I’ve seen a couple of them,” USU guard Sam Merrill said. “I guess we would have won some games. That’s good to know.”

The Aggies did win the Mountain West Tournament and earned the automatic berth to the NCAA Tournament. It would have been the second straight trip to the Big Dance for USU, but more importantly an opportunity to redeem what many Aggies felt was a poor showing in the 2019 NCAA Tournament. That had driven the athletes in the offseason and throughout the 2019-20 campaign.

“It’s hard for the guys,” Bean said. “We wanted to see where we could go and make a run. We felt this was the best chance we would have in two years. Just not being able to get that closure was tough for everybody. It was hard to move on from.”

But unlike bubble teams or many that were still playing in conference tournaments, the Aggies do know they had qualified.

“We told our guys the silver lining in all this is we earned our way into the NCAA Tournament because we were able to win,” USU head coach Craig Smith said. “How fortunate were we to experience those three days in that venue and find a way to win. All three games had a unique feel, but one thing was consistent, all came down to the last three or four minutes. For us to win those games in different ways, culminating the way it did, is a badge of accomplishment. You can play for four years and never get to have that feeling. But these guys can look each other in the eyes and know that they accomplished something that is so hard to do. They will remember that forever.”

So, while the tournament should be going on right now, most of the Aggies are scattered. When USU shut its doors and went online for the rest of the semester, it encouraged students to move home.

“I’ve been at home shooting in the backyard,” said Bean in a telephone interview from Moore, Oklahoma. “I usually get some workouts in at the high school, but they are all shut down. We have some weights here at home, and I’ve just been trying to work hard and stay active and make the most of the offseason.”

Smith is staying in touch with his athletes after an interesting end to the 2019-20 season that saw the Aggies finish at 26-8.

“There is no training manual,” Smith said. “You have no time to wallow in self pity. Like we tell our guys, it’s NBA (next best action). You go from the highest of highs, I’m not going to say the lowest of lows, but it wasn’t far from that. We have so much empathy for the players, the (coaching) staff and all of the support staff.”

The season was certainly a wild ride. Smith listed wins against LSU and Florida, but also brought up dealing with injuries through a good chunk of the year.

“It just seemed like every time we turned around, there was an injury of some sort, whether it was Bean or Sam,” Smith said. “We knew about Neemie (Queta) for a long time. But Roche (Grootfaam) pops a shoulder out. At the end Able Porter basically doesn’t play the first two games (at the conference tournament), then Sean (Bairstow) gets a fracture in the championship game. It was just like that all year.

“Then this happens. This is the way it was this year. You just have empathy for your guys because they dream of this moment and put all of their effort into it, and they earned it. We earned the right to go to the NCAA Tournament.”

The hardest part for Smith was all the work that goes into a season. For nearly six months, the Aggies had practiced and played games. Then it was over. Usually a season ends on the court.

“I get the big picture; we all do,” Smith said. “It still doesn’t take away the pain. You dream of that moment. We felt like we could really make some noise in the NCAA Tournament this year. Now you are not going. Sunday comes around and they are not having the selection show. It took some time.

“... That was one of the hardest parts of this whole thing. We don’t expect people to feel sorry for us. There is a big picture here.”

Last week was a wild ride for the sports world. As news started to come out about games being held with no spectators, then suspended, Smith had an uneasy feeling cancellation was coming. So did the athletes.

“I kept refreshing my Twitter feed every few minutes and the news kept getting more serious,” Bean said. “I was on my way to practice to get in some extra shots before. JJ (Justin Johnson) came into the practice facility and told me.

“It first hit me how extreme this was when coach Smith met with all the players and he threw out the number 81. It had been 81 years since the NCAA Tournament had started and this was the first time it has been canceled. It really hit me that this was a monumental decision made by the NCAA.”

Smith described the last team meeting in the Spectrum as emotional. It came the day after a “phenomenal, an amazing practice.”

“Basically, it was announced at 2:15 (p.m.) and we were scheduled to practice at 3:15,” Smith said. “I got to meet with the guys, but what are you going to say? It was very emotional. I’ve never seen Sam Merrill get emotional, but he had streams of tears. We get done talking and are hugging and I’m looking for Diogo (Brito), and he has sprinted up the tunnel. I texted Diogo and said, ‘Diogo, I love you’ and he said, ‘I love you. I’m sorry but I’m not ready for it to be over. I want to keep playing. I don’t want to say good-bye.’

“Sean Bairstow has gone back to Australia, Alphonso Anderson has gone home. This team will never be together again. Maybe for a Hall of Fame induction, but that would be hard for all 15 guys to get back. There is no finality to it and that was very, very difficult.”

Smith has had a chance to meet with Brito and talk. Workouts are supposed to begin May 1, but who knows if that will even happen.

“I just heard the border between the U.S. and Canada is shut down, so I’m not sure what Liam (McChesney) is going to do now that he is home (in Canada),” Bean said. “The coaches haven’t said when they want us back. We got some workouts sent to us from our strength coach, so we are going to stay in shape and do the best we can. It’s looking like spring workouts aren’t probable, so we will do the best we can.”

Unlike seniors Merrill and Brito, Bean will be back and have another chance to try and get to the NCAA Tournament.

“It was a shock the way it ended and I’m going to miss playing with those guys (seniors),” Bean said. “I was planning on playing a few more games with them and practicing with them. It makes me grateful for their leadership. It’s a wake-up (call) for me. I’m going to be one of the upperclassmen and the leadership role is going to be expanded for me. I have to be someone the guys look up to. It definitely motivates me to improve.”

Bean ended his sophomore season averaging a double-double with 11.9 points and 10.5 rebounds a game. He also averaged 2.1 assists an outing and led USU with 51 steals, and was second on the team with 24 blocked shots.

The last Aggie to average a double-double was Mike Santos during the 1976-77 season. Santos was also the last USU player to average double figures in rebounding.

“That’s pretty cool,” Bean said. “I was hoping to keep that alive no matter how many games we played. My parents and family have reminded me about it. It’s nice, but I’m really proud of my teammates and how we ended the year.”

With everything up in the air, the future of Queta is also on hold. The center tested the NBA waters last season and returned. He inured his knee playing for his country of Portugal during last summer’s European championships. He missed games and didn’t back to full stride until late in the season.

“He is in town,” Smith said of Queta. “We haven’t met about his future. He is knocking out school. We don’t know which way he is leaning. There are a lot of unknowns with the NBA. Events have been postponed. I think he is waiting and seeing what happens.”