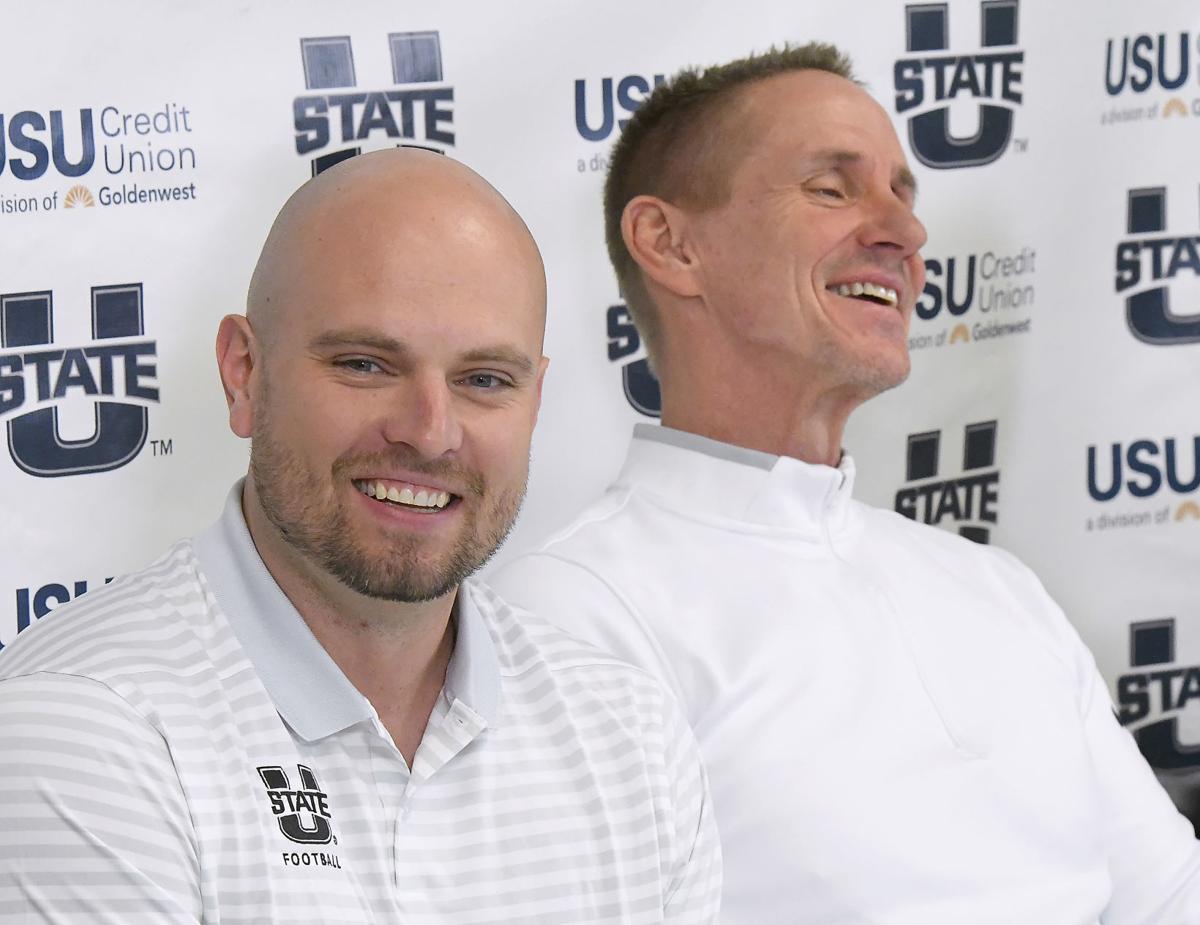 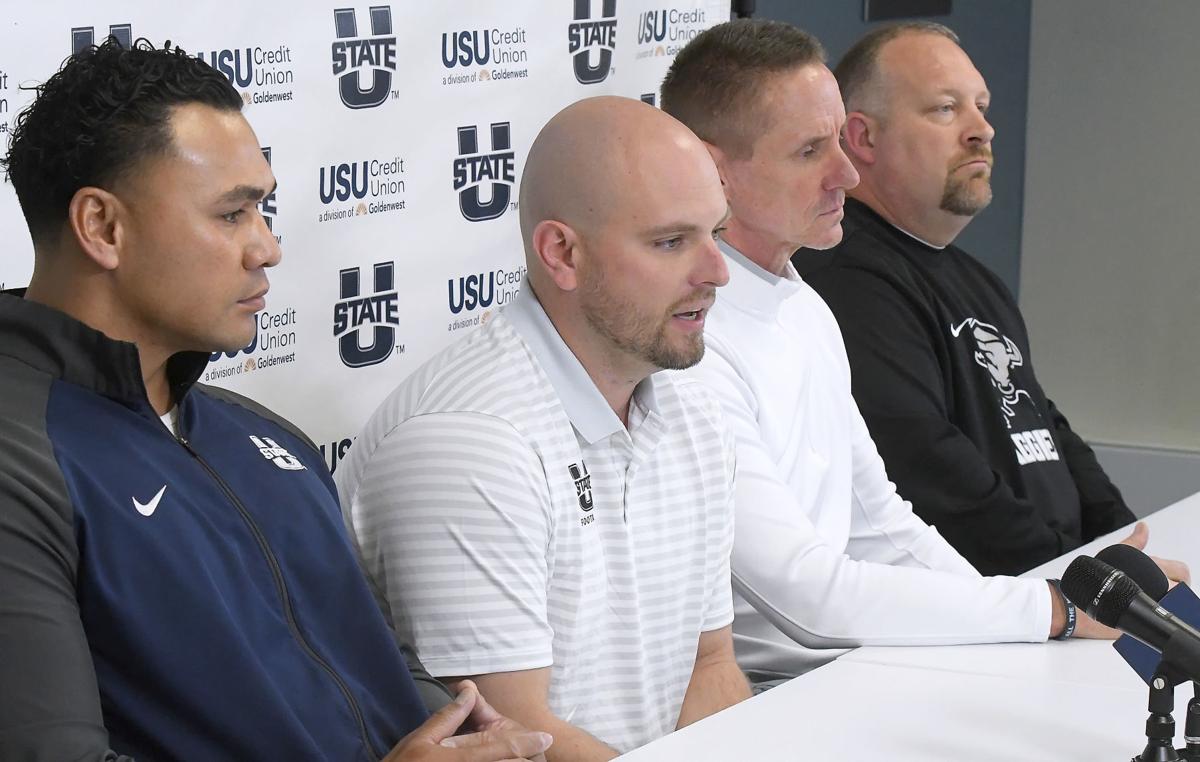 Eight of the nine full-time assistant coaches from last year’s Utah State football team will be back for the 2020 campaign.

However, the coaching staff will definitely have a different look this upcoming season. For starters, the Aggies have a new offensive coordinator in former Eastern Washington and North Texas OC Bodie Reeder, plus USU veteran coaches Frank Maile and Stacy Collins are now co-defensive coordinators. Former defensive coordinator Justin Ena will coach the inside linebackers in ’20.

Additionally, the Aggies are now in need of a special teams coordinator with Collins moving to his new position — a position he held at Southern Oregon (2007), the South Dakota School of Mines (2002) and professionally in Austria with the Vienna Vikings (1999-01).

USU head coach Gary Andersen, Reeder, Maile and Collins addressed the restructuring of the coaching staff during a press conference on Thursday morning.

“We talked after the season on dissecting ourselves, starting with myself, and doing everything we can to move in the right direction to continually progress the young men in our football program both on the field and off the field,” Andersen said. “So, we made some decisions. They’re great decisions. They’re well-thought out.”

The hiring of Reeder was officially announced Wednesday by Andersen. The former Eastern Illinois University quarterback is replacing Mike Sanford Jr., who was hired two weeks ago as the OC and QB coach at Minnesota.

“With Bodie, it was a long process,” Andersen said. “Anybody who knows me very well know that I usually make decisions very quickly. I don’t take a lot of time to think about hires, usually. This time, it was very important that I did everything I could to take my time. ... It became very clear to me that this was the guy we were looking for. He’s had success everywhere he’s been. He’s ground himself through the process of coaching. He’s worked like crazy.”

Reeder spent the 2019 campaign at North Texas, where he helped the Mean Green average 30.3 points per game and 418.6 yards of total offense an outing. Prior to his lone season in Denton, Texas, Reeder ran one of the most prolific offenses at the FCS level in his two years as Eastern Washington’s offensive coordinator. The Eagles reached the FCS championship game in 2018 and ranked third nationally in total offense (528.2 ypg) and scoring offense (43.1 ppg).

Reeder was also an OC at Wisconsin-Stout from 2011-13 and enjoyed a lot of success as Oklahoma State’s quarterback coach from 2014-16. The Cowboys ranked seventh among FBS programs in passing offense (323.9 ypg) in Reeder’s final season in Stillwater, Oklahoma.

What can Aggie fans expect from a Reeder-led offense in ’20? For starters, Reeder stressed the importance of dictating “the pace of play,” whether that’s playing at a high rate of speed or employing more of a ball control scheme.

“First of all, we want to take advantage of the guys that we have in the room,” Reeder said. “We want to play to the strengths of our offense. We’re going to have multiple tempos and multiple personnel, and make sure that we’re getting the ball to our playmakers in space and in the correct fashion that they need to get it.

Here were some of the other takeaways from the press conference:

1. New defensive scheme: The Aggies employed a 4-2-5 base defense in ’19, but that will change in ’20. USU will be going back to the scheme it utilized when Maile was the co-defensive coordinator from 2016-18.

“It’s going to look similar to what you saw in 2018,” Maile said. “So we’re going to be a multiple odd front. A three-four defense is what we’re going to be running, with the ability to get into some of the even fronts, with different coverages.”

The Aggies struggled defensively for large spells in ’19, especially after All-All-American linebacker David Woodward was sidelined with a season-ending injury. USU gave up 30.69 points and 440.5 total yards an outing this past season.

“We really want to bring the attacking style of defense back,” Collins said. “Hard emphasis on the takeaways. We were fortunate in 2018 to lead the nation in takeaways. Three-and-outs, get up, get ourselves off the field, get the offense a chance to get back on, change those paces, put the stress on other defenses, TFLs and sacks. Then playing great red zone defense, force some field goals down there, blocking those field goals. That’s our blueprint.”

2. D.J. Tialavea will likely join the staff as a graduate assistant coach: Tialavea was a tight end for the Aggies from 2009-13, and then carved out a four-year career in the NFL as an undrafted free agent. The West Jordan native last played for the Chicago Bears in 2017.

Andersen is working hard to ensure his former player will be on staff as a offensive grad assistant, specifically working with the tight ends, in ’20.

“We’re excited about the opportunity to get D.J. here,” Andersen said. “He’s already been in grad school since he got done with his time in the NFL. He has been in graduate school at Utah State, so it should be a slam dunk to get him up here.”

4. How the Aggies will handle special teams in ’20: Several coaches will have roles mentoring the various special teams units and while it will be a group effort, there will essentially be a special teams coordinator — whether or not that responsibility comes with an official title.

“Right now, we haven’t hired that 10th coach yet, so I can’t completely dissect (special teams),” Andersen said. “We will have somebody that is in charge of the special teams. When I say that, I really mean the specialists. The specialists need a coach. They need somebody they can go to. They practice different, their timing is different. Stacy was unbelievable at that stuff. Stacy will educate somebody, because he knows a heck of a lot more about it than I do. We’ll get the right education to get the specialists into the right spot and truly become the best they can be at their positions. Then, the special teams as a whole, right now we’ll break it up.”