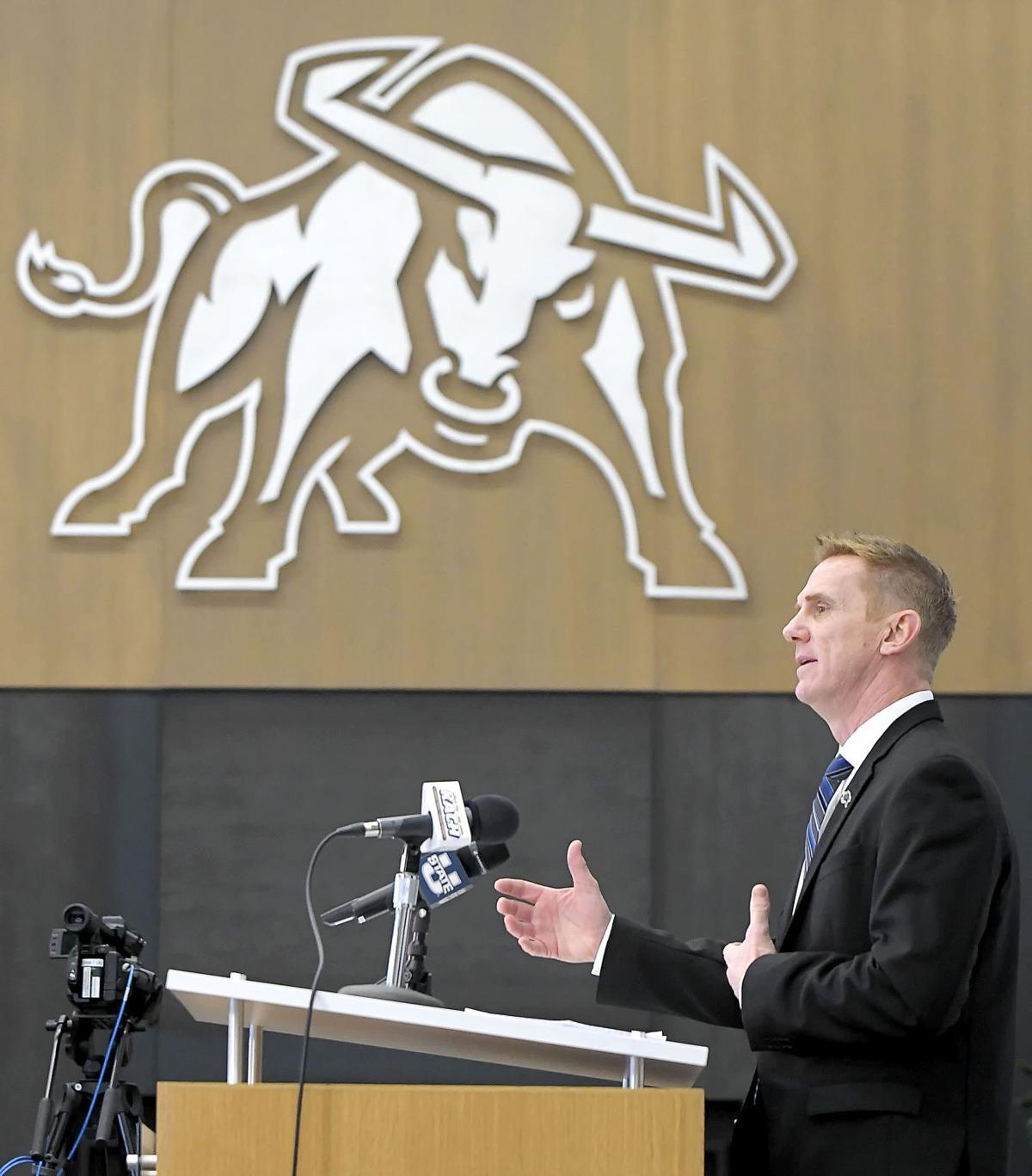 Blake Anderson speaks at a press conference Monday at Maverik Stadium, where he was introduced as the new head football coach at Utah State University. 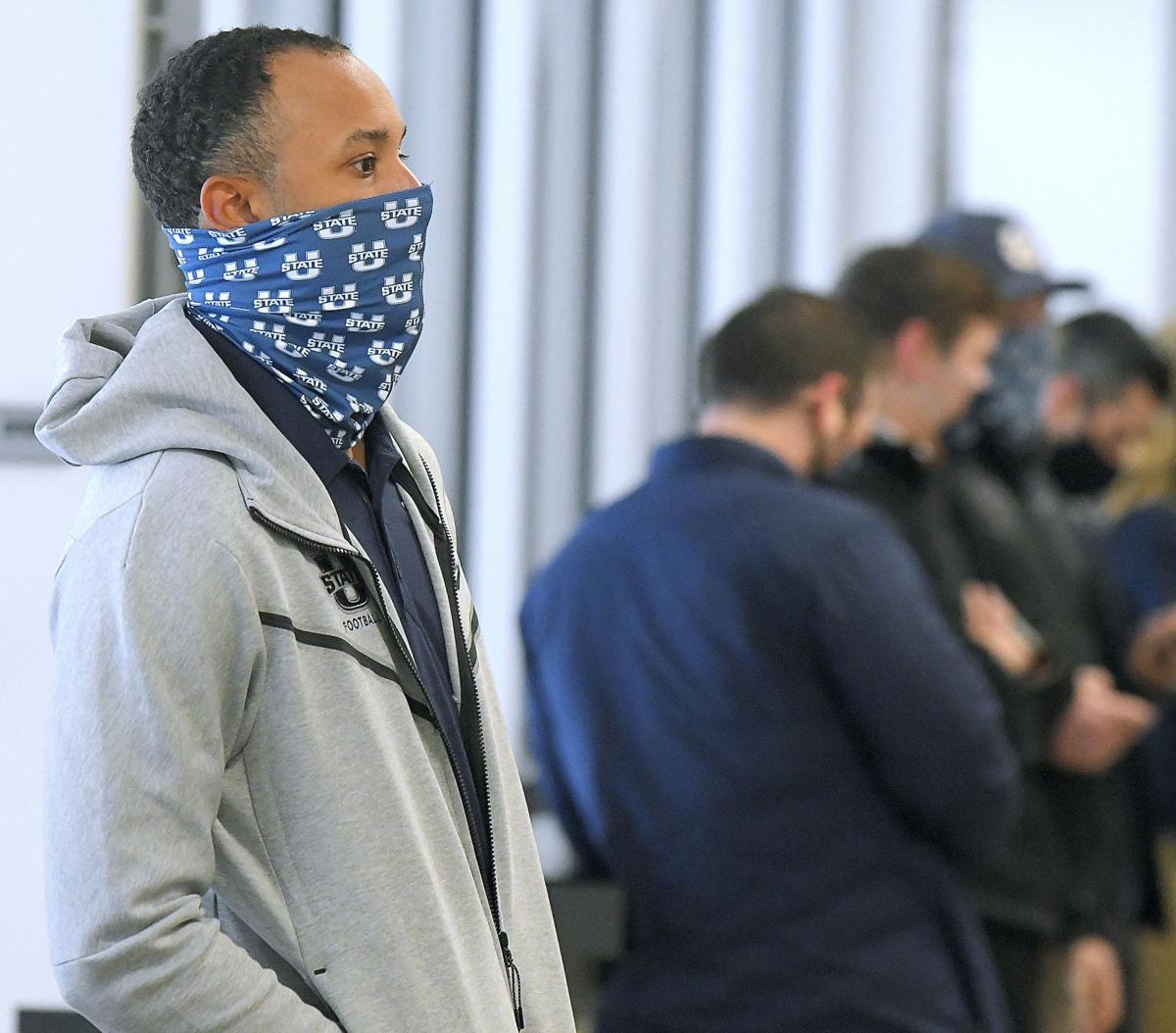 Blake Anderson speaks at a press conference Monday at Maverik Stadium, where he was introduced as the new head football coach at Utah State University.

It was a relatively lengthy process for Utah State University Vice President and Director of Athletics John Hartwell in selecting a new head football coach, but the end result was well worth the wait, he asserted during Monday’s press conference.

“But again, a great candidate pool, a very diverse candidate pool, but at the end of the day when we looked at all of the qualities that we want in our next head football coach here at Utah State, coach Blake Anderson checks off all of those boxes,” Hartwell said. “... Those qualities that he brings to Utah State as a winner on and off the field and a developer of young men, those things put him head and shoulders above the rest of our candidates and made him a very easy choice to be the next head coach at Utah State University.”

Hartwell was particularly impressed with the “blue-collar mentality” he feels Anderson will bring to the Aggies. Hartwell was the athletic director at Troy when Anderson first started coaching at Arkansas State. Both universities are in the Sun Belt Conference.

Anderson had just finished his seventh season at the Arkansas State helm before resigning last Thursday to accept the same position at USU. The 51-year-old guided the Red Wolves to a pair of conference championships and six straight bowl games and winning records, with that streak coming to an end this fall. ASU went 4-7 in 2020, including 2-6 in Sun Belt play. The Red Wolves did beat Kansas State on the road early in the season.

“I felt like we had a great team going into the season,” Anderson said. “We played close with Memphis, went to K-State and beat K-State in Manhattan for a Power 5 win and, as you guys know, COVID took over and we were hit really, really hard. So I appreciate as well the fact that John (Hartwell) had enough faith in me and my body of work that he didn’t look at a 4-7 record in the middle of a COVID epidemic and let it define who he thought I was. ... I can promise you, we were much better than a 4-7 program.”

During Anderson’s time at the Jonesboro-based university, the Red Wolves posted a 51-37 record and won 38 of 56 games against Sun Belt opponents. Arkansas State, which went 2-4 in bowl games during that timespan, captured back-to-back Sun Belt titles in 2015 and 2016.

The Red Wolves consistently ranked in the top 30 among FBS programs in total offense during Anderson’s time at the helm. The native of Hubbard, Texas, made it a point to thank a handful of people by name, including Terry Mohajir, Dr. Charles Welch and Dr. Tim Hudson, for giving him a chance at Arkansas State — his first head coaching gig.

“I was an offensive coordinator with no pedigree,” Anderson said. “My dad wasn’t a coach. I didn’t win a Heisman Trophy. I wasn’t a great player. I’m just a guy that played ball and loved to play ball, that was fortunate enough to work his way up the (coaching) ranks. ... Tim Hudson saw something in me seven years ago and gave me an opportunity to be the head coach at Arkansas State and, again, a ton of people would have loved to have (that) job. I wouldn’t be standing in front of you guys today being announced as your head coach had they not given me the opportunity to do the job I did in Jonesboro.”

There’s no question, Anderson enjoyed his time in The Natural State, but was looking for a “fresh start,” especially after his wife Wendy passed away after a courageous battle with breast cancer prior to the 2019 season. The former Baylor and Sam Houston State player also lost his father to lung disease that same year.

“Even as tough as it was to leave (ASU), I’m just excited to be here and I feel like God’s moving me in a new direction, and this is a great new challenge, new fresh start and new opportunity for myself, for my kids, my girlfriend Brittany (King) and her kids, my staff and their families,” Anderson said. “As much as we enjoyed those seven years, the excitement of starting fresh in an unbelievable place with tremendous tradition and history in one of the prettiest places on the planet to do your job, I mean I could not be more blessed. And so to me it’s just an awesome, awesome opportunity.”

While at ASU, Anderson squared off against USU and “one of my closest friends,” former Aggie head coach Matt Wells, on two occasions. The Red Wolves beat the Aggies at home in overtime in 2014, and lost at Maverik Stadium by a 34-20 scoreline in 2016.

“I have listened to (Wells) talk about this place and what it meant to his family, just how much they enjoyed living here,” Anderson said. “I’ve watched the program win, actually got my tail kicked right out there in that stadium not too long ago as the head coach at Arkansas State, so I feel like I’m pretty familiar with (this program).”

Anderson’s first Division I coaching job was at New Mexico from 1999-01, “so I feel like I’m familiar with the Mountain West.” While at New Mexico, Anderson was mentored by Rocky Long, who later became the head coach at San Diego State and is the all-time winningest football coach in MW history.

Anderson, who started has collegiate coaching career in 1992, has experience as an offensive coordinator at five different programs — Trinity Valley Community College, Middle Tennessee, Louisiana-Lafayette, Southern Mississippi and North Carolina. As a result, Anderson has a wealth of coaching connections and has already started assembling his staff. Five members of Anderson’s staff were at Monday’s press conference, including former USU standout quarterback Chuckie Keeton.

“(USU has) given me (the means) where I can go out and hire some of the best coaches in the country and the list of people that want to be part of the staff is very, very long,” Anderson said. “And I’ve been very deliberate and very intentional about how to put this staff together.”

Keeton will coach either the running backs or tight ends during his second stint at USU, but this time as a full-time staffer. Keeton was a graduate assistant for the Aggies in their record-setting 2018 campaign and has spent the past two seasons as a graduate assistant with Wells and his staff at Texas Tech.

“I’m absolutely fired up to bring home one of your very own, one of the best players to have ever played out in that stadium,” Anderson said of Keeton. “... We went (out) to eat the other night and everybody recognized him and all wanted to take pictures with him. ... It’s been great to have him in the room already and the way the kids are going to respond to him, the way the community responds to him and Aggie Nation responds to him is one of biggest steps of us getting right back that where we all want to be.”

In addition to Anderson, Ethan Morriss, Kyle Cefalo, Nick Paremski and David Roberson will be making the move from Jonesboro to Logan. All four of those men were at the press conference.

Roberson will be USU’s recruiting coordinator — a position he held during Anderson’s entire tenure at ASU. Paremski will be the special teams coordinator, while Cefalo will be the wide receivers coach and passing game coordinator.

Morriss’ role has yet to be determined — “he doesn’t really know what he’s going to do for me yet,” Anderson said — but was ultimately a guy Anderson couldn’t leave behind and one he raved about. Morriss was a graduate assistant and worked primarily with the safeties during his two seasons with the Red Wolves.

However, Anderson did say “all three positions will be held by minority coaches, and basically every cultural background, every ethic and racial background will be seen on our staff as well.” It’s something the father of two sons and one daughter takes a great deal of pride in.

As far as his goals for the program from a competitive standpoint, Anderson is determined to help propel the Aggies to uncharted territory.