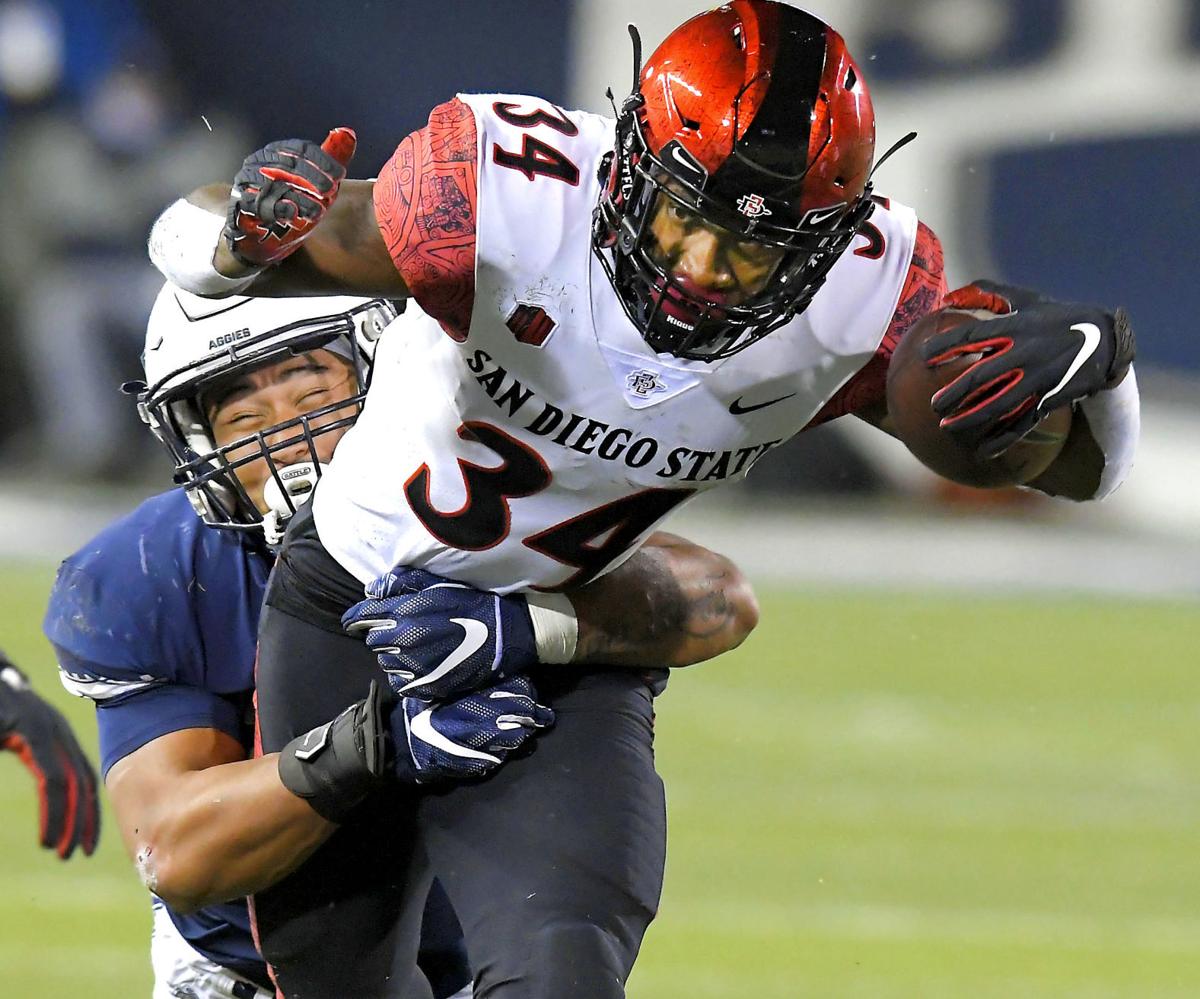 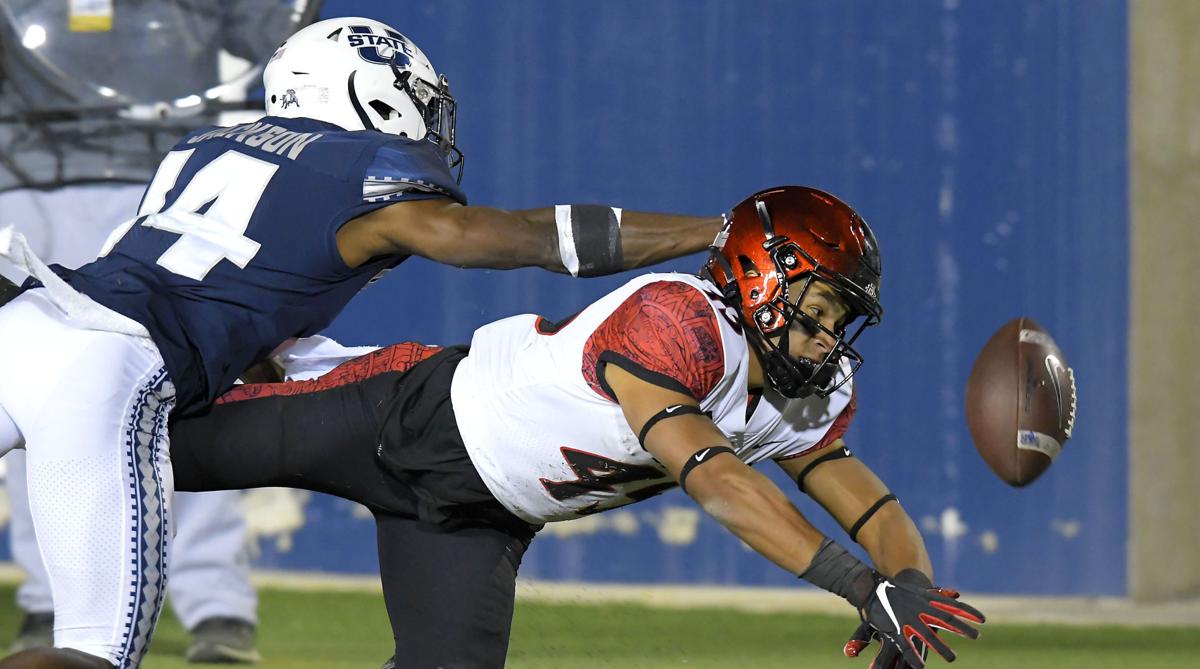 Fast forward a week later and horrendous second half was far too much for the Aggies to overcome in their home opener. San Diego State finished with a whopping 345-79 edge in total offense in the second half — 199-6 in the third quarter — to turn a 10-7 halftime lead to a convincing 38-7 beatdown of Utah State last Saturday night at Maverik Stadium.

The Aztecs (2-0) dominated the Aggies (0-2) on both sides of the ball. For starters, SDSU racked up 407 yards on the ground — the fourth-highest single-game tally in program history — and continued its trend of defensive excellence. The Aztecs haven’t allowed an opponent to score more than seven points in 38 straight quarters, which is the longest active streak among all FBS programs.

“That’s a very good San Diego State team, very physical, and they got after us on both sides of the ball,” USU head coach Gary Andersen said during Monday’s press conference via Zoom. “... It looks like they have a pretty good recipe for success, with some really good players on (the defensive) side of the ball and it held up again on Saturday night.”

The Aggies only trailed by three points at halftime thanks to some clutch defensive and special teams plays — USU defensive lineman Hale Motu’apuaka blocked a field goal — plus a sensational diving reception by Deven Thompkins in the east corner of the north end zone as time expired in the second quarter.

USU quarterback Jason Shelley scrambled out of the pocket and found Thompkins for a 37-yard SportsCenter-worthy reception on the full extension.

The Aggies had a golden opportunity to keep their momentum going early in the third quarter. The Aztecs received the opening kickoff and quickly found themselves on their own 9-yard line following a holding penalty and a sack by USU’s Cash Gilliam and Justus Te’i. Nevertheless, SDSU was undaunted as it executed back-to-back plays of 16 yards — the first in a second-and-26 situation.

SDSU ended up finding paydirt on that possession, plus its next three drives. Meanwhile, USU only managed four first downs during the final two quarters.

It was another rough performance for the Aggies offensively as they punted on seven of their 11 possessions — they went three and out four times — and turned the ball over on three of their other four drives. Shelley and fellow signal caller Andrew Peasley threw interceptions, and true freshman tailback John Gentry fumbled in the fourth quarter. Conversely, the Aztecs, who piled up 570 total yards to the Aggies’ 215, finished with zero turnovers.

A year ago, the USU didn’t turn the ball over, plus got a pick-six from safety Shaq Bond, in a 23-17 road triumph over SDSU, which terminated a 10-game skid to the Aztecs in the process.

Tailback Jaylen Warren came up big against SDSU last season, but the standout senior didn’t play Saturday as he is nursing a knee injury. All-American kickoff returner Savon Scarver and safety Troy Lefeged Jr., the Aggies’ leading tackler a year ago, did return to the lineup after sitting out the previous week against Boise State.

The Aggies fought hard defensively in the first two quarters, but struggled mightily after the half. It didn’t help SDSU enjoyed a 37:53 to 22:07 advantage in time of possession, including 20:50-9:10 in the second half.

San Diego State amassed 289 yards on the ground after halftime and averaged 8.7 yards per carry. The visitors had touchdowns runs of 27 and 73 yards, plus seven other rushes of 10-plus yards. It was reminiscent of the last time the Aztecs traveled to Logan as they accumulated 400 rushing yards and prevailed 40-13 on Oct. 28, 2016.

“There’s a blueprint to doing it and we’ve got to do a better job as coaches of making sure the kids fully understand what their job description is and where they fit ... what technique they’re supposed to use when they get to the point of attack,” Maile said of USU’s struggles defending the run. “Obviously, it’s disappointing because we didn’t play a part in helping our team be successful defensively. Again, we’ve just got to stay focused and our kids are still hungry, man, they’re still hungry, and what we told them yesterday was the fastest way to get this taste out of our mouths is we’ve got to win this week.”

The Aggies won’t have much time to lick their wounds as they return to action Thursday on the road against a 2-0 Nevada squad. The opening kickoff from Mackay Stadium is scheduled for 5 p.m. This is the first of four Thursday night games for USU in 2020.

To help account for a short week, the Aggies watched film Sunday, which is typically a day off for the players. The NCAA doesn’t allow teams to practice on election day, but Andersen said “we actually can work out (Tuesday) morning” until 10 o’clock. USU will travel to Reno on Wednesday and Andersen asserted “we’ll have a little bit more of a walk through than we do on a normal Friday.”

“(A short week is) always a challenge, but I think we got caught up as much as we can be caught up,” Andersen said. “Really, the challenge is physically for the young men, tracking those young men that had so many reps behind them in that last game. And they played their tails off for four quarters, (while) the other guy that played 10 reps is obviously a heck of a lot fresher than the guys that played 50 reps, 40 reps or whatever they ended up with.”

The time for USU’s home game against Fresno State on Saturday, Aug. 14, was announced Monday. The Aggies will host the Bulldogs at 12:30 p.m. and the game will be televised on Fox Sports 2. It will likely be USU’s only afternoon contest this season.

San Jose State QB Nick Starkel was named the Mountain West Offensive Player of the Week after throwing for 467 yards and five TDs in his team’s 38-21 win over visiting New Mexico. The senior tossed three of his scoring passes on third-down plays and another on fourth down.

Wyoming linebacker Charles Hicks was selected as the conference’s Defensive POTW after contributing with four tackles, including a pair of sacks, and an INT in his team’s 31-7 triumph over visiting Hawaii. The sophomore returned his pick 47 yards, setting up a Cowboy TD four players later.

Boise State’s Avery Williams was tabbed as the league’s Special Teams POTW after bringing back a kickoff 88 yards to the house in his team’s 49-30 road victory over Air Force. The senior now has an impressive six special teams touchdowns (four punt returns, two kickoff returns) during his collegiate career.