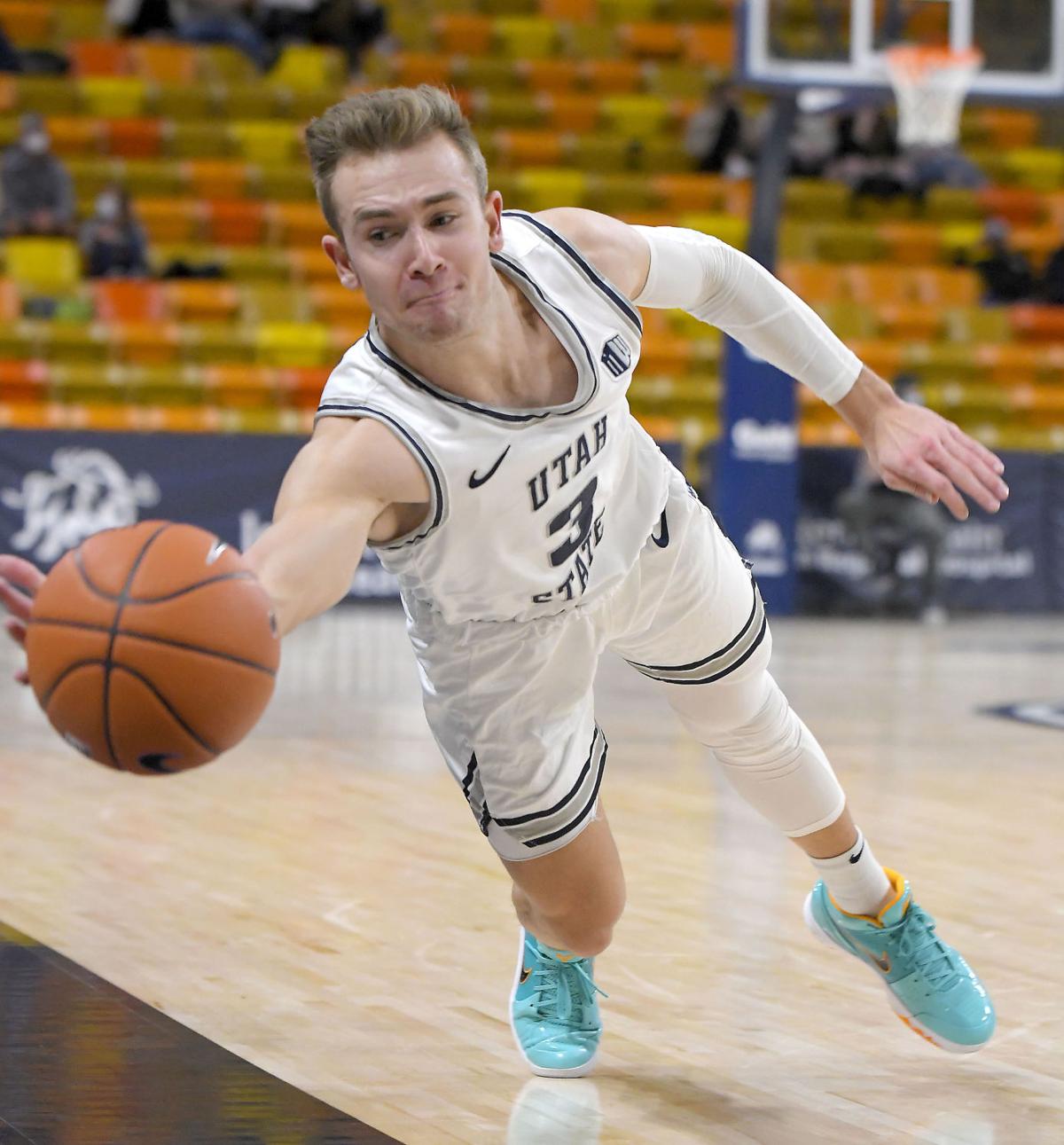 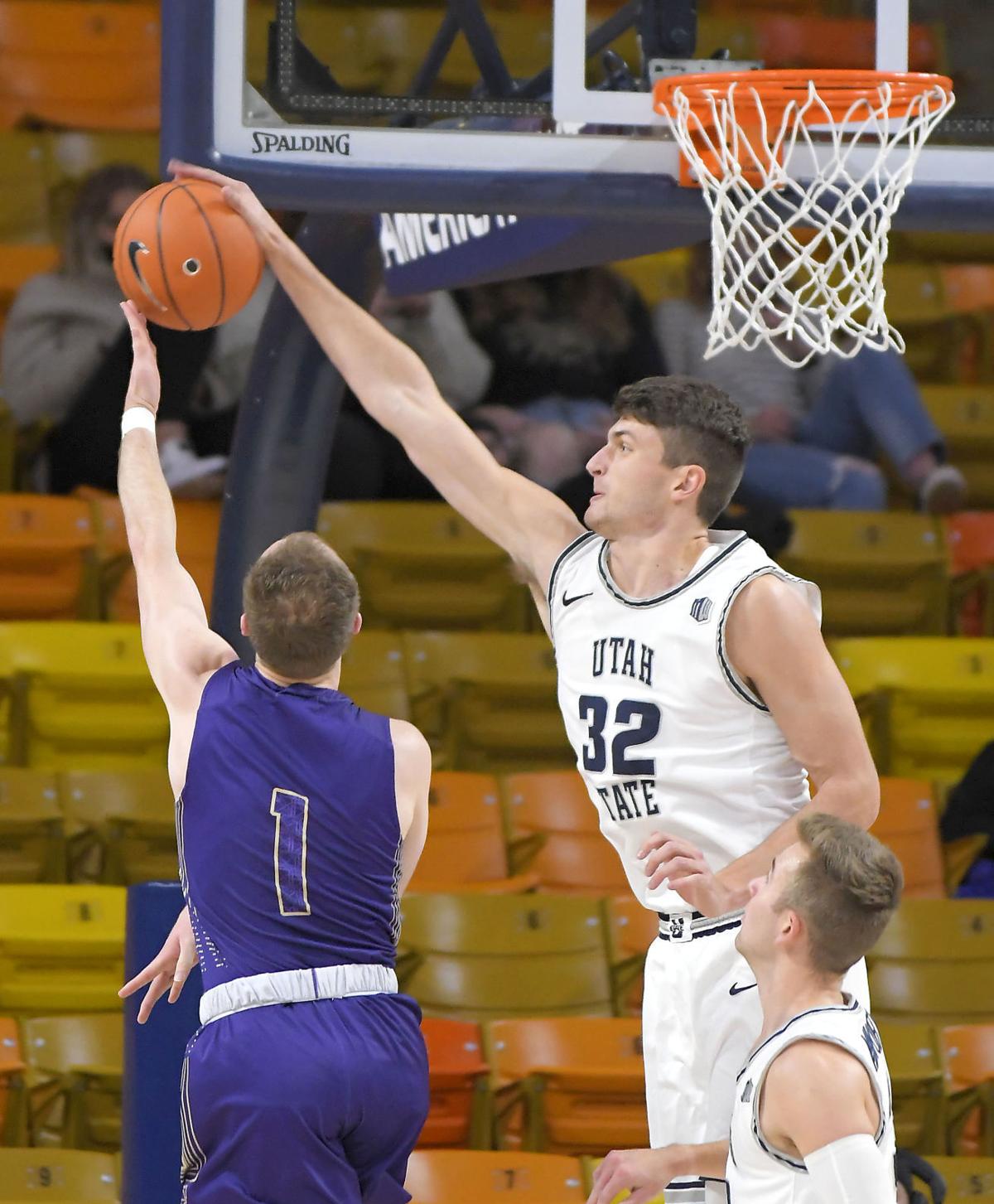 College of Idaho guard Derek Wadsworth (1) gets his shot blocked by Utah State center Trevin Dorius (32) during the first half on Tuesday in Logan.

College of Idaho guard Derek Wadsworth (1) gets his shot blocked by Utah State center Trevin Dorius (32) during the first half on Tuesday in Logan.

Heading into Tuesday night’s game, the Aggie men’s basketball team was looking for more production from its bench.

Over the first four games of the 2020-21 season, statistically, Utah State was lacking big time in getting help from the reserves. That changed Tuesday.

In the Aggies’ 90-64 victory against NAIA College of Idaho at the Dee Glen Smith Spectrum, the USU bench came through with flying colors.

“Sometimes when you know going into a game you are going to maybe get a few more minutes and we are going to develop the bench, those guys were ready for the challenge,” said USU assistant coach Eric Peterson, who is filling in for head coach Craig Smith, who has COVID-19. “I told them to get in there and play as hard as you can defensively. When our defense is good, our offense is much, much better. I thought those guys (off the bench) responded to the challenge. ... We need to keep developing our bench. That will be a huge key for us moving forward and into conference play.”

USU’s bench outscored their counterparts for the first time this season, finishing with 37 points to the College of Idaho’s 33.

“I think we all take pride that we can do something for this team and be a big part whenever we get in,” said Aggie guard Steven Ashworth, who came off the bench to score 15 points and dish out a game-best seven assists. “Personally, I took more pride after the BYU game in coming out and being a better defender. Once I took some pride in defense, I was able to get the offensive game going as well. ... Coming off the bench, I knew my team was going to need me tonight. I think many other guys felt that way also.”

The freshman guard also had two steals and grabbed three rebounds in his best game so far in a USU uniform. Ashworth saw 32 minutes of action.

“I think ultimately it was a great team win, a great opportunity for the guys to come together,” Ashworth said. “I enjoyed seeing guys like Liam McChesney, Szymon (Zapala), Matt Wickizer get out there and make some plays. It was definitely fun for us to be able to do that tonight, so hopefully we’ll be able to keep it rolling into Weber State on Saturday.”

All 11 Aggies (2-3) that dressed saw playing time, with 10 of them scoring and grabbing at least one rebound.

“The hardest part with our schedule so far is usually you play a scrimmage and an exhibition game and maybe another non-Division I,” Peterson said. “We kind of had it flipped where we played some really good teams early and it was harder to develop our bench.”

Before the latest game, Smith had stressed his team would focus on getting more help off the bench. With athletes like Alphonso Anderson, Sean Bairstow and Trevin Dorius back from last year, the Aggies needed them to contribute. Each of them responded and obviously Ashworth came up big.

Bairstow ended up starting and had a season highs in points (11), rebounds (3), assists (4) and steals (3). Since he started, those did not count toward the numbers above.

“The point of scheduling them (Yotes) was just that we needed a game to help us get better and develop our bench and get some guys some minutes,” Peterson said. “We played a really good team. The second half was a little tight there for a little while, but our calling card was just on the defensive end. They had 12 points in 24 possessions in the second half, and I thought we did a much better job defensively and it helped us offensively. College of Idaho is a good team and our intent was to get better, and I felt we did get better throughout this game.”

The Aggies held a 44-33 lead at halftime, but three minutes into the second half trailed 45-44. USU responded by outscoring the Yotes 30-5 over an eight-minute span and cruised to the victory.

Justin Bean led the Aggies with a game-best 21 points on 6 of 7 shooting from the field and was a perfect 9 of 9 from the foul line. He also had seven rebounds and three steals in just 22 minutes of action.

The Aggie starting lineup was different from the first four games: Bairstow, Worster, Brock Miller, Bean and Queta. It was the first career start for Bairstow. … Former Preston High School star Derek Wadsworth is a starting guard for the College of Idaho. He missed all six of his field goal attempts Tuesday, but did have four rebounds and three assists in 23 minutes of action. … The Aggies won the rebound battle (40-24) for the fifth straight game. … USU shot a season-high 51.7 percent from the field. … The Aggies had a season-high 18 assists and a season-best 12 steals. … USU outscored the College of Idaho 40-6 in the paint and have outscored all but one opponent in the paint this season. … Bairstow and Worster had career highs in steals with three each. … Bean was a perfect 9 of 9 at the free throw line, as his nine makes at the charity stripe tied his career high. … The Aggies lead the all-time series with the Yotes, 2-0, as these two usually play exhibition games.

Four USU players were not at the game Tuesday.

The Aggies were without junior guard Marco Anthony, junior center Kuba Karwowski and freshmen guards Max Shulga and Zahar Vedischev. Anthony had started the first four games and was averaging 13.8 points and 4.8 rebounds a game.

“I don’t know how much I can say,” Peterson said. “Without giving specifics, we’re going through medical protocols to ensure the safety of our guys. That’s in accordance with Utah State, the Mountain West and the NCAA.”

The Aggies head south for a date with in-state rival Weber State on Saturday. The Wildcats (2-0) hosted Westminster on Tuesday, winning 85-73. The game on Saturday will tip at 2 p.m. and can be seen on KJZZ.