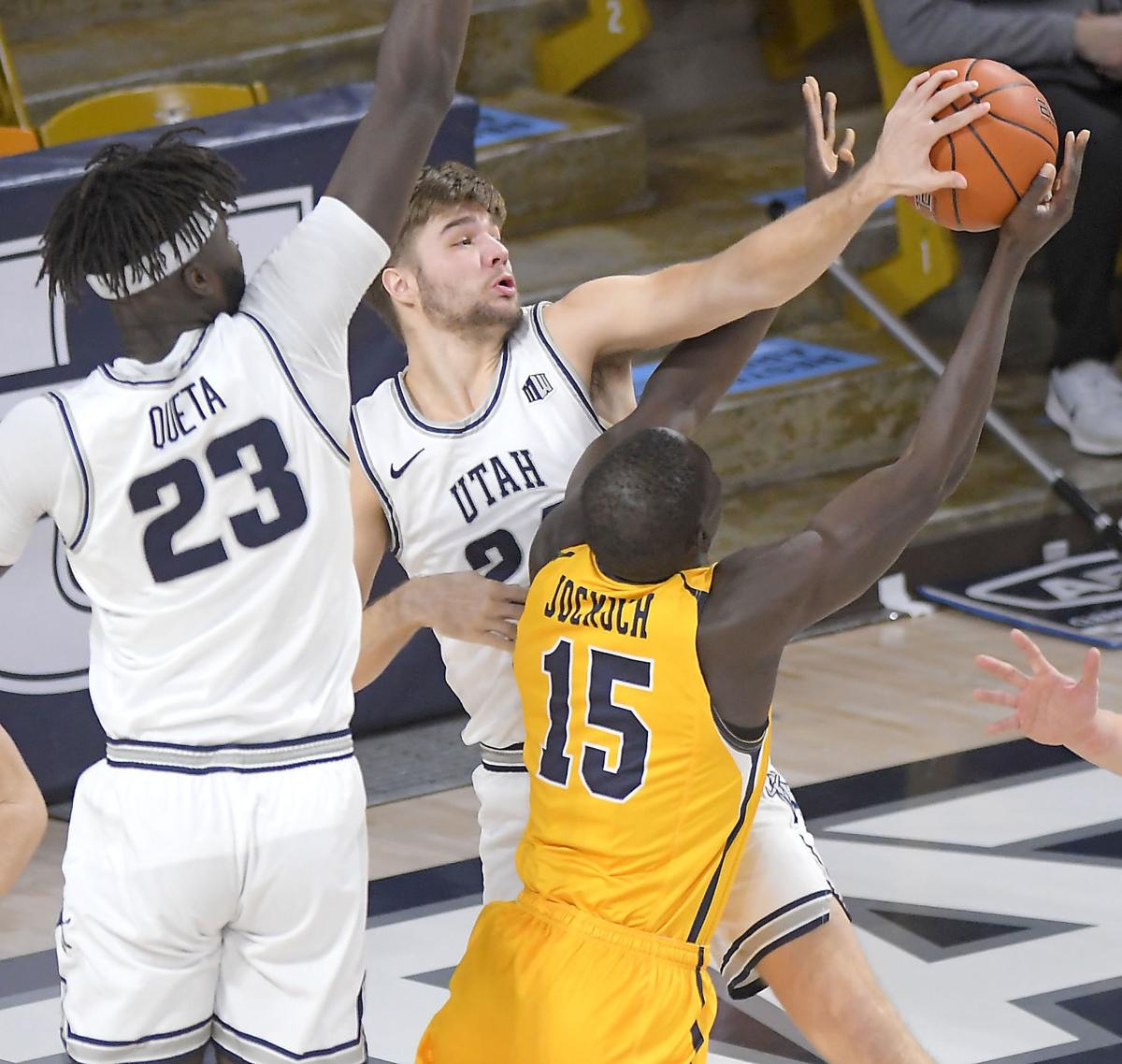 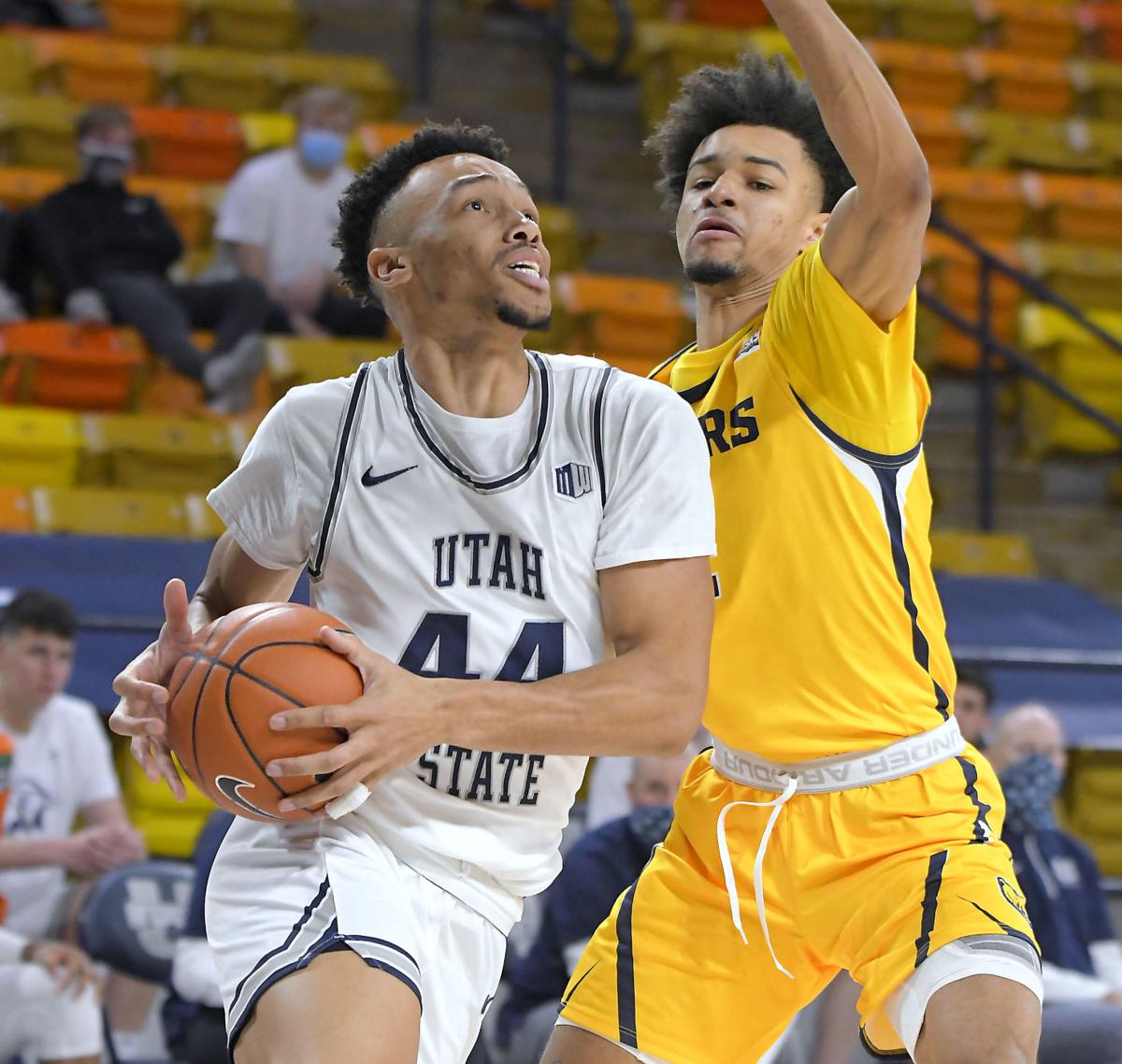 Utah State guard Marco Anthony (44) drives to the basket as Northern Colorado guard Daylen Kountz defends during the second half on Friday.

Utah State guard Marco Anthony (44) drives to the basket as Northern Colorado guard Daylen Kountz defends during the second half on Friday.

It was a triumphant return for several Aggies Friday night at the Dee Glen Smith Spectrum.

After having to cancel two games, not practice for a week and be without their head coach for two games prior to that, Utah State was back in action and couldn’t be happier about it. The Aggie men’s basketball team used two big runs in the second half to dispatch of a pesky Northern Colorado squad, 63-50, in front of 1,376 fans.

“We made a big push there in the second half, played stronger at the rim and were able to close out the deal,” USU head coach Craig Smith said. “It’s good to play a game. We’ll come back and practice for two days, then start league play.”

Smith was visibly excited in the closing minutes when the Aggies (3-3) took control of the game for good.

“There is no place like the Spectrum,” Smith said. “That’s not lip service. This place is incredible. We are very fortunate to have fans in the arena. They make a difference. When we made that run, they were loud.”

Utah State had not played a game in 10 days. That didn’t stop Justin Bean from going out and recording another double-double with 12 points and 11 rebounds.

“We just got back to playing our game, especially starting on the defensive end,” Bean said. “... They (Bears) came in having played some games and in a rhythm and we had not played in 10 days. It was big for us to really lock into our scout and had a few great practices this week. I’m proud of the guys for locking in and beating a really good Northern Colorado team.”

The Aggies turned up the pressure on the defensive end in the second half, which led to some stops or “kills” as Smith refers to three consecutive scoreless possessions by the opponent. Smith proudly said USU had six kills in the second half against the Bears (4-2).

“Coach Smith threw in an adjustment in the second half, and I thought it worked great for us,” Bean said. “It shortened their (Bears) possessions and didn’t give them as much of a chance to run their sets, and (it) made them uncomfortable. And it also gave us a chance on offense and we could attack more.”

“In the second half I thought we really defended well,” Smith said. “We got after them, pressed a few possessions and that got us off our heels a bit. Then we just started scoring in a myriad of ways and that was great to see. We were able to hold them to 50 points on 64 possessions, which is excellent.”

Joining Bean in double-figure scoring was Marco Anthony with a game-best 19 points, and Rollie Worster with 12 points. Queta was in foul trouble most of the night, but did have six points, seven rebounds and three assists.

The Bears were led by Daylen Kountz with 13 points. Kur Jockuch netted 11, while Bodie Hume finished with 10, nearly 10 below his average.

“We have a tremendous amount of respect for coach Smith and for his program. This is one of the best programs in the country,” Northern Colorado head coach Steve Smiley said. “When both of our programs had games lost and we had the opportunity to try and find a game talking to coach Smith, we both said ‘let’s do it.’ We’re really thankful that we got a chance to come up here and compete because when you play great teams and you play really well-coached teams, you learn a lot about yourself. We went in there at halftime with a one-point game, and just being able to see what they did to us, they exposed some of our flaws.”

The Aggies began the game with a turnover, but then quickly looked like a team that had not taken a break. They raced out to a 11-2 lead and made six of their first seven field goals.

Anthony drilled a 3-pointer off a pass from Bean to begin the scoring. Anthony found Queta for a layup to cap the opening surge.

“We got off to a great start, up 13-4 or whatever it was,” Smith said. “We had a great flow on offense, really defending hard and then we came to a grinding halt. We have to get more production out of our bench.”

Finding the bottom of the net became a lot harder after the first four minutes. Over the last 16 minutes of the first half, USU made just 6 of 24 shots from the field and also missed four free throws on six attempts.

The Bears chipped away at the early deficit and eventually took a brief 27-25 lead on a 3-pointer by Rodrick McCobb with a minute to play in the opening half. The advantage didn’t last long.

Anthony drilled his second trey of the game to give the hosts a 28-27 lead at the break. Anthony had 11 points at halftime.

The Aggies went to pressing and the Bears went more than four minutes without scoring. USU cashed in with an 11-0 run. Five different Aggies scored during the run. Brock Miller drilled a pull-up 3-pointer to cap the surge and give USU a 43-36 lead with 12:03 left in the contest.

The Bears got within three on several occasions, but could get no closer.

A 10-0 run by the Aggies down the stretch put the game away. Four Aggies scored during that run as USU took a 63-46 lead with 3:18 left to play. Northern Colorado went five-and-a-half minutes without scoring.

“I thought it was a great game for the Aggies,” Smith said. “Northern Colorado is good. They have a winning pedigree, a winning culture. They’ve been really good the last four or five years so they understand how to win.”

The Aggies starting lineup was back to how they started the season: Marco Anthony, Rollie Worster, Brock Miller, Justin Bean and Neemias Queta. … The Aggies won the rebound battle, 40-30, for the sixth straight game this season and included a season-high 16 boards on the offensive end. … USU had just nine turnovers in the game, while the Bears had 16. … The 50 points allowed by the Aggies were a season low. . … Redshirt freshman forward Liam McChesney did not dress for the game and had his left foot in a boot. … The Aggies lead the all-time series with the Bears, 6-1, however, these two have not met since the 1934-35 season.

While Smith was out with COVID, assistant coach Eric Peterson was in charge. Peterson switched places with Smith as he was not at Friday’s game.

“We were short a few staff members,” Smith said. “I won’t get into specifics. I can promise you they are not suspended from the team. I’m sure you guys can put two and two together.”

Bean came up big when the Aggies needed him. He finished with his 28th career double-double and is now tied with Jimmy Moore for 10th on the career double-double list at USU. Bean had 12 points on 6 of 11 shooting and grabbed a game-best 11 rebounds. The junior also came up with two steals and dished out two assists in 32 minutes of action.

There were no dunks by the Aggies over the first 20 minutes or the second 20 either.

The Aggies remain at home and begin Mountain West Conference play in their next outing. They host San Jose State (1-2) on Monday at 7 p.m. and again on Wednesday, also at 7. The Spartans were in action late Friday night taking on Santa Clara.