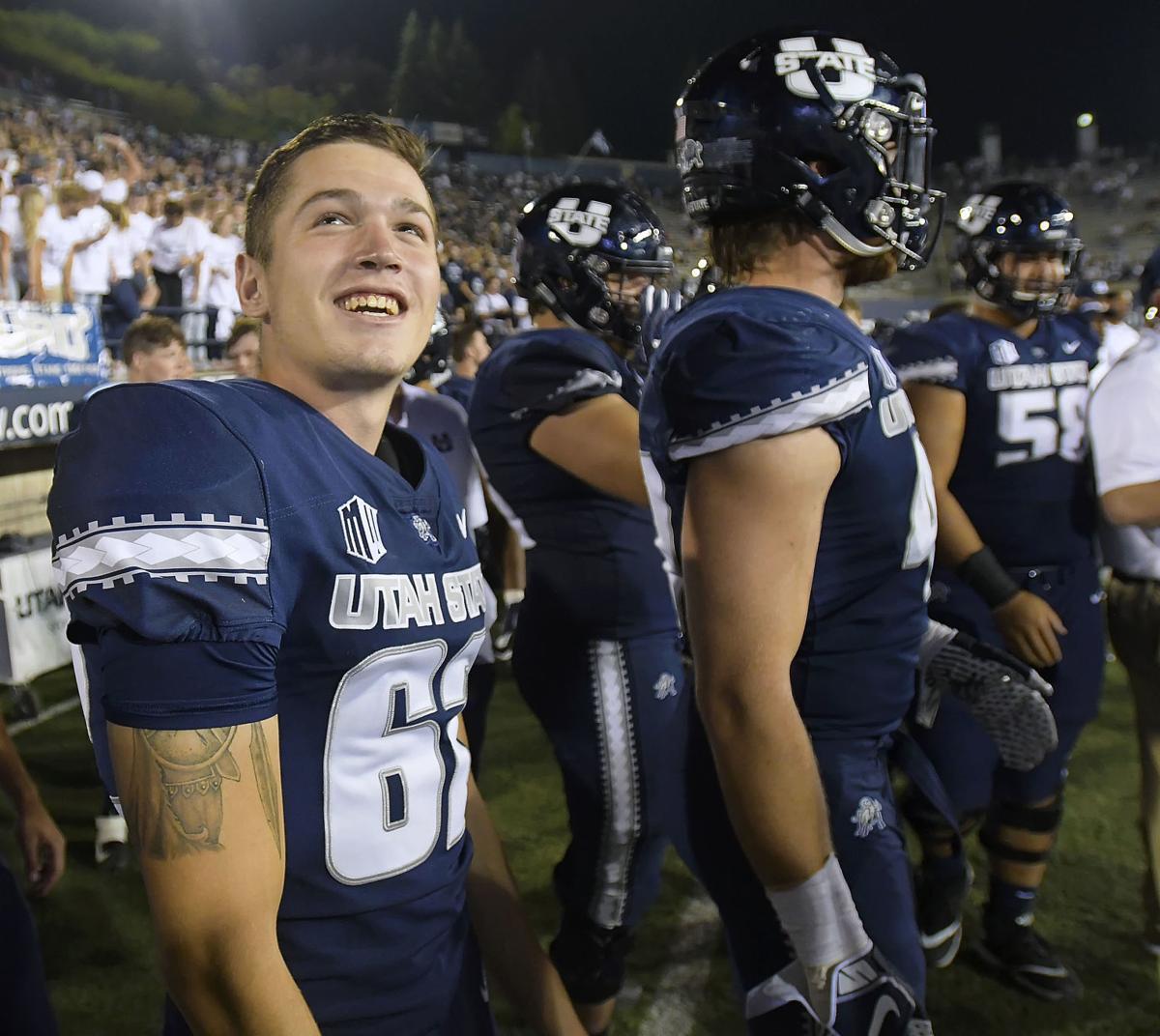 Place kicker Dominik Eberle (62) stands on the sidelines as the Aggies play New Mexico State in 2018. 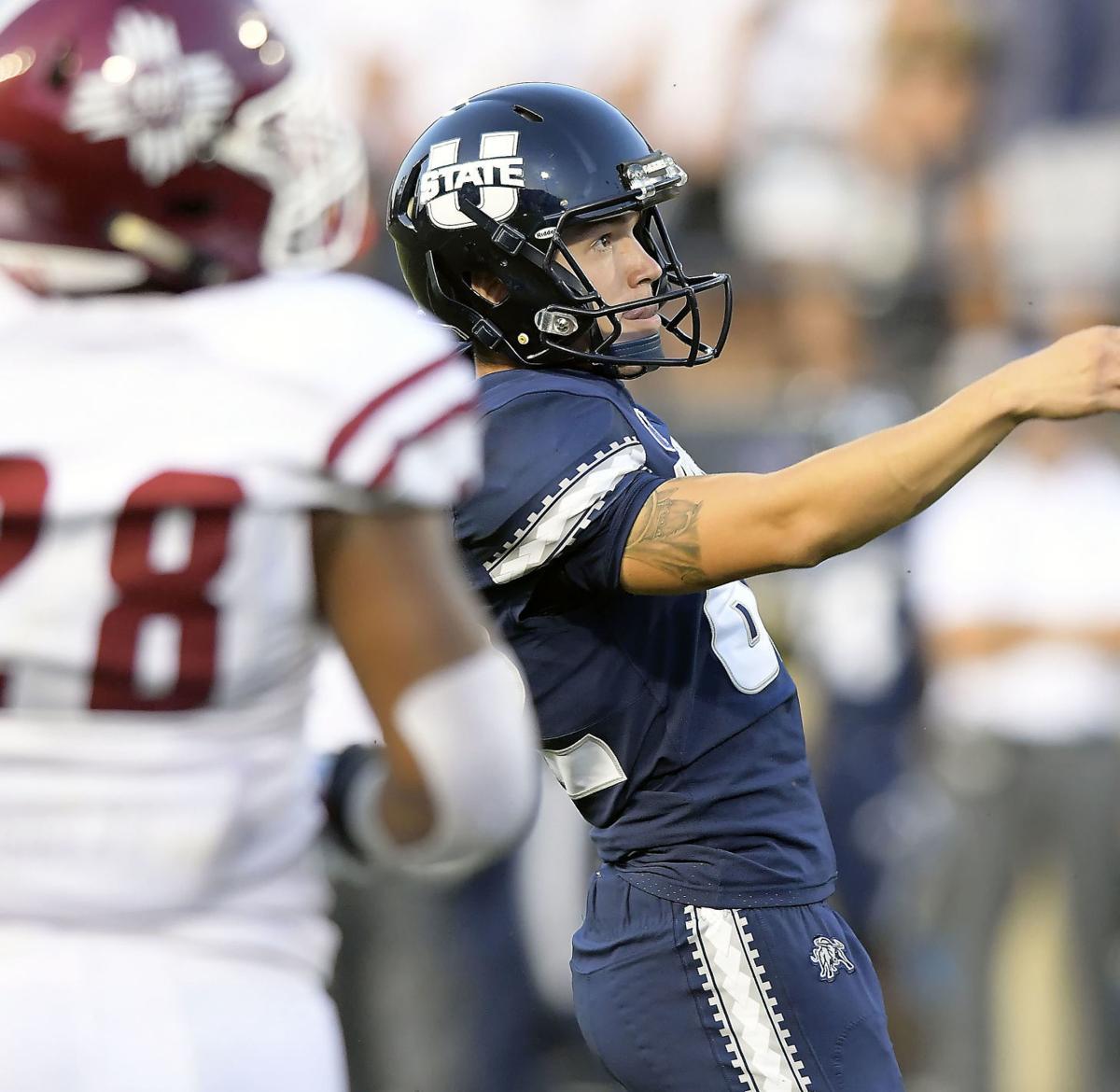 Place kicker Dominik Eberle (62) stands on the sidelines as the Aggies play New Mexico State in 2018.

From David Woodward, to Gerold Bright, to Troy Legefed Jr., there were several Aggies who made a huge impact in their team’s 34-24 Homecoming victory over Colorado State in a torrential rainstorm last Saturday night at Maverik Stadium.

As well as those three Utah State football players performed in that game, the Aggies also had a handful of unsung heroes. Without question, one of those guys was kicker Dominik Eberle, who was successful on both of his field goal attempts —both from 40-plus yards out — and all four of his extra points.

Simply put, the senior put his stamp on the win when he drilled a massive 48-yard field goal into the driving rain, giving the Aggies a 27-24 lead with 2:57 remaining in the third quarter. Not only was the rain fierce on that play, but the snap was high and holder Aaron Dalton didn’t have time to ensure the laces were out on the football.

Nevertheless, Eberle managed to make the most of a challenging situation. It’s something No. 62 has done time and time again during his illustrious Aggie career.

“It was very impressive,” said Stacy Collins, USU’s special teams coordinator. “I mean, that’s not easy. It’s a 48-yarder regardless of conditions, but you throw in all of those factors (it’s extremely hard). But that’s the kind of kid he is, man. He’s a competitor and he did a great job, and it was an awesome play for us.”

It ended up being an unforgettable evening for Eberle, who moved past Brad Bohn as the highest-scoring kicker in USU history. The native German now has 291 career points, which is seven more than Bohn, who played at USU from 1997-2000. At his current pace, Eberle will surely become the leading scorer in program history, surpassing the 308 established by former Aggie great running back Robert Turbin.

Bohn is actually Eberle’s kicking coach and has been since he was in high school, making the record extra special for the star pupil.

“It’s pretty cool to look at that and overall just reflect on how much Brad’s helped me and the high bar that he set,” Eberle said. “(Breaking his record) means a lot.”

Bohn started mentoring Eberle in 2014, and the two have developed a strong friendship. Bohn has always wanted his pupil to shatter his USU records. Bohn still holds down the top spot in career field goal makes (59) and attempts (89), with Eberle second at 50 and 65, respectively.

“(In 2014 is) when I really started taking kicking seriously and talking to coaches and going to different kicking schools, and (Bohn’s) was 45 minutes away from me, so I just kept talking to him and ever since then it’s been non-stop contact,” Eberle said.

In addition to the aforementioned record, the son of Güenther Eberle and Carmen Romero-Eberle also ranks first in the Aggie record books with four field goals of 50 or more yards. Three of those were in one game, a 60-13 drubbing of New Mexico State last September at Merlin Olsen Field.

Eberle was arguably even better as a sophomore as he drilled 16 of 18 field goals during the regular season and was one of three finalists for the Lou Groza Award, which is presented annually to college football’s best placekicker. He earned All-America honors and first-team all-Mountain West accolades as a sophomore, to boot.

Indeed, Eberle has pieced together a memorable collegiate career, an impressive feat for someone who didn’t even start playing football until his freshman year of high school. Eberle was actually a standout soccer player growing up and, as a 14-year-old, had just attended a national camp in Germany when his father informed him the family was moving to the United States. Eberle grew up in a small farming town about 35 miles away from the much larger city of Nuremberg, Germany.

The Eberles relocated to California and shortly thereafter settled down in Redondo Beach. Dominik Eberle played soccer and football at Redondo Union High School, but a meniscus injury persuaded him to eventually focus on football.

Eberle was a solid kicker for the Sea Hawks as he garnered all-CIF first-team all-league honors as a junior and senior. Eberle made 7 of 10 field goals as a senior, but ultimately he “wasn’t recruited very highly.”

“I kind of got in contact with coach (Kevin) Clune and coach (Dave) Ungerer, and it sometimes happens by luck, but I sent my film in to (USU) and they really liked it,” Eberle said. “They kind of kept in contact and told me that they had a preferred walk-on spot, and I had already been accepted to the university. I was going to plan on walking on no matter what, and then just having that preferred walk-on spot really was the final (straw), and that’s what got me here in 2015.”

It didn’t take long for Eberle to feel at home in Cache Valley.

“Logan reminded me a lot of home,” Eberle said. “Germany, it’s very green, you have all four seasons, you have the mountains. I mean, it’s a small community up here in Logan, but it’s nice to where sometimes you can just go to the grocery store and recognize a lot of people and just have casual conversations. And other times you can just go out fishing, go float the river, just some other fun stuff, and I really enjoyed that.”

Eberle redshirted his first season at Utah State, and then saw limited time in 2016, where he was 3 for 5 on field goals and attempted one kickoff. Nevertheless, the Aggies saw enough out of Eberle to award him a scholarship prior to the 2017 campaign — a decision they surely don’t regret.

The 6-foot-2, 190-pounder is one of only three USU kickers (minimum of 30 successful attempts) to never miss a PAT. The three-time Mountain West Special Teams Player of the Week has booted 141 career extra points, which is one more than previous Aggie record-holder Nick Diaz.

The senior is off to a great start this season as he has only missed one field goal — a 42-yarder against San Diego State — and is currently tied for second in the Mountain West in points per game (10.0).

Did the missed FG against the Aztecs give Eberle any extra motivation heading into the CSU game?

“I mean, it’s just about taking one kick at a time and, you know what, I want to be 100 percent at all times, and when a miss happens I’m as surprised as anybody, but that’s part of the game sometimes where it’s just another opportunity to learn,” said Eberle, who has 209 career kickoffs as an Aggie — 121 of which have resulted in touchbacks. “You look it at, you see what you did wrong and figure out how to correct it. It’s just about constantly refining your technique.”

Indeed, Eberle has sparkled during his four-plus years as an Aggie, and has thoroughly enjoyed his time in Logan.

“I truly love it here,” said Eberle, who is on track to graduate this December with a bachelor’s degrees in international business and marketing. “I would call it my home over Redondo Beach, honestly, (because of) the friendships I’ve made, the experiences I’ve had here from freshman year until now, and the experiences that I’m going to make. It’s truly special and Logan will always be a place I want to call home.”

Not only has Eberle made an impact on the field, he has maintained close to a 3.5 cumulative GPA and is a two-time academic all-Mountain West honoree. Additionally, Eberle is fluent in Spanish and German. His father is German and his mother is of Mexican-American descent.

“The thing I love about Dom most is he’s not just a kicker, he’s a competitive athlete,” said Collins, who speaks a little German himself. “You know, he played soccer at a very high level, and you see that. I mean, he’s competitive at everything he does. And the rare times he misses a kick, he bounces back extremely fast, and I’ve been around guys that don’t kind of have that mental fortitude, but he has that. ... And he’s an awesome person off the field. Just a tremendous person, a tremendous student. He does everything that’s asked of him, so he’s a great kid to be around. He exemplifies exactly what an Aggie is both on and off the field.”

In his free time, Eberle enjoys “reading a lot,” especially fiction novels and sports psychology books. He also likes to play video games and attend concerts, and is a big fan of rap music.

Eberle is currently focused on doing all he can to help the Aggies capture their first-ever Mountain West championship. Kicking in the NFL is Eberle’s other primary goal, and he put himself in a position to graduate at the end of this semester, “so I can focus on just the training aspect of it in December through when the NFL draft is and when mini camps and all of that are.”

Collins is confident Eberle has what it takes to carve out a career in the NFL.

“At that level, it’s extremely competitive,” Collins said. “The tough part about the next level is there is only 32 of those jobs and that’s what makes it extremely tough. But he’s a competitive kid, he’s got a big-time leg and he’ll get his shot, and he’ll go out and do everything he can to make the most of it. But whether that’s in the cards or not, he’s going to be successful in life. That I can guarantee you. I’ll be working for him some day.”