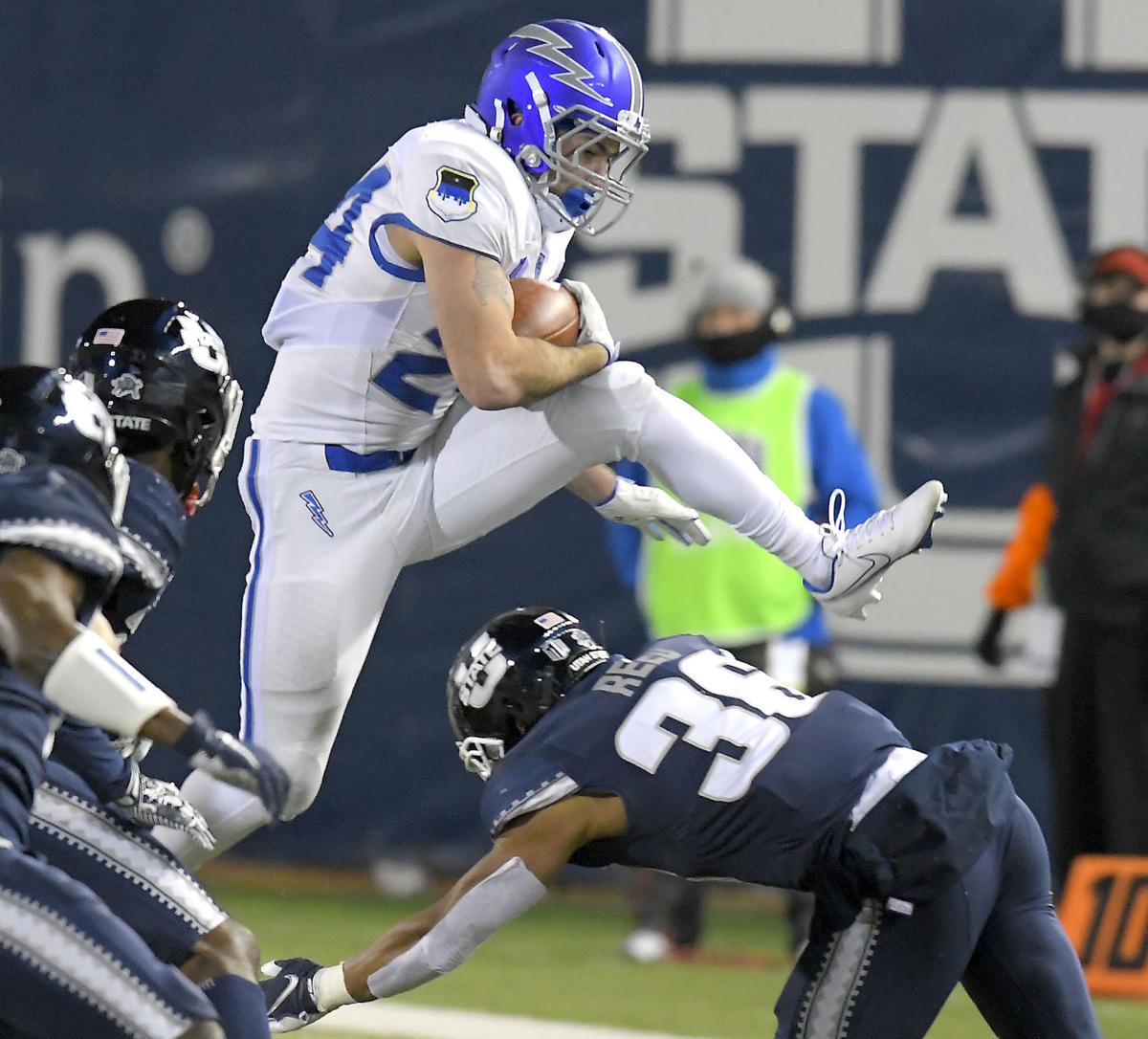 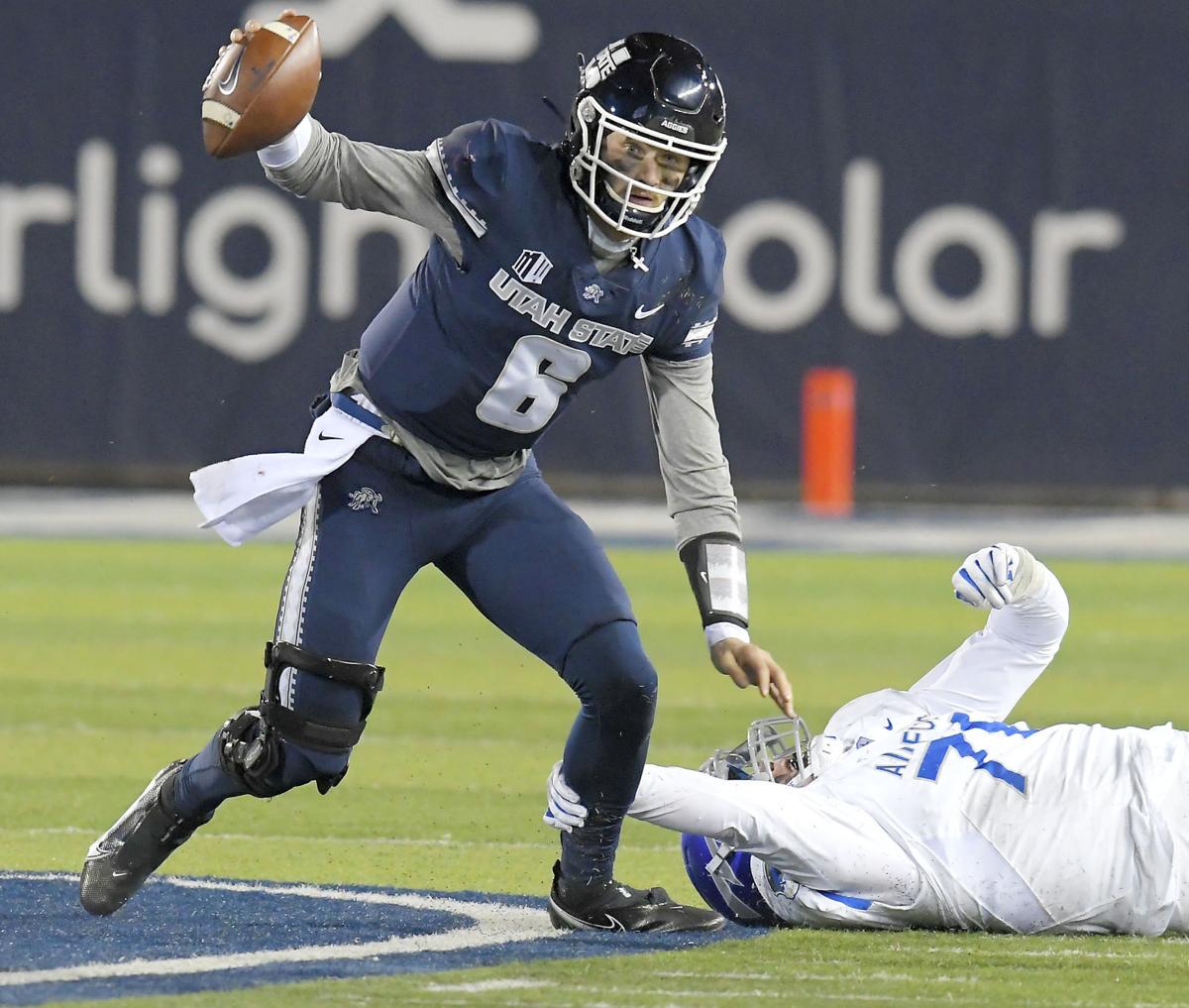 Utah State quarterback Andrew Peasley (6) scrambles away from Air Force defensive tackle George Silvanic (78) during the first half on Thursday in Logan.

Utah State quarterback Andrew Peasley (6) scrambles away from Air Force defensive tackle George Silvanic (78) during the first half on Thursday in Logan.

A strong start was not nearly enough for Utah State’s football team.

The Aggies marched down the field on their opening possession and jumped out to a 7-0 lead on Senior Night, but Air Force stormed back and pulled away for a convincing 35-7 victory on a chilly Thursday at Maverik Stadium.

USU (1-5) only managed 167 yards of total offense after its first series. Meanwhile, Air Force (3-2) was efficient on the ground and even through the air en route to racking up 461 yards on 64 plays. The Falcons, who amassed 334 yards on 55 rushing attempts, were averaging close to 10 yards per play for much of the evening.

“The bottom line is the game of football comes down to two things — effort and execution, and so the effort, I thought, was really good by our guys, (but) the execution wasn’t as good,” USU interim head coach Frank Maile said. “... The offense kind of lost their mojo and we weren’t able to control the clock, and defensively, again, we had opportunities to get off the field, but couldn’t do it. And we left them on the field longer then we wanted them to be and, again, this is what this (Air Force) team is built to do and that’s their game plan is to eat up the clock, run the ball and, when they think you’re sleeping on it, take shots in the air.

“And so the bottom line, that’s on me. That’s on me as the head coach and I’ve got to do a better job of preparing these guys for the game.”

It was a very encouraging start for the Aggies, who received the opening kickoff and put together their longest drive of the season from a time of possession standpoint. The hosts took a whopping 8:04 off the clock on its 15-play, 65-yard march to paydirt. USU converted on all five of its third downs — the final one a well-executed 4-yard pass from Andrew Peasley to Jordan Nathan. Peasley rolled to his right and found a wide open Nathan for an easy touchdown toss.

“You know, it felt really good because this whole season we’ve struggled with that,” Nathan said of his team’s early success on third down plays. “And coming into the game, myself personally, I knew that you can’t lose opportunities against a team like Air Force because you only have so many drives, you only have so many times where you get the ball. So, every third down I was saying that we need to take advantage of those given to us, we need to capitalize on this to help the defense out.”

The momentum would have continued for the Aggies, but they were on the wrong end of a bad call by the officials. Air Force gained 14 yards on a fourth-and-9 pass on its opening possession, but the replay showed the ball clearly hit the ground. Fortunately for the visitors, the play was not reviewed.

One play after that fourth-down conversion, speedster Kadin Remsberg took a pitch from quarterback Haaziq Daniels, received a great block and was off to the races for a 21-yard scoring sprint.

It was a struggle the remainder of the opening half for the Aggie defense as the Falcons scored touchdowns on their other two series and averaged 9.64 yards on 25 plays for 241 total yards. Daniels connected with a wide open Ben Peterson on a 49-yard scoring strike with 9:22 remaining in the second quarter and the sophomore signal caller made a nifty cut on his way to burning USU on a 37-yard scamper to the end zone with 52 seconds remaining.

Daniels’ touchdown run capped off a 8-play, 99-yard march for the Falcons, who were pinned at the 1-yard line thanks to Stephen Kotsanlee’s 46-yard punt. It was an outstanding first half for Daniels, who completed his first six passes and threw for 103 yards on 6 of 7 attempts.

The Aggies advanced the pigskin to the Falcon 33-yard line in the waning seconds of the second quarter, but Peasley was intercepted at the 3 on the final play of the half. USU gained 157 yards in the first two quarters.

Air Force scored a pair of touchdowns after halftime to slam the door — the first on a 1-yard run by Matthew Murla, and the second on a powerful 15-yard run by Brad Roberts , who bulldozed his way through an Aggie and into the end zone.

The Aggies only threatened to score once in the second half and that opportunity came to a screeching halt when Peasley’s fourth-and-4 pass from the Air Force 29 was well off the mark. USU gained a measly 75 yards in the final two quarters. A costly holding penalty loomed large on a nice passing play that would have put the Aggies in Falcon territory on a different second-half possession.

“As you said, it was a lot of mental things that we were doing wrong,” Nathan said when asked about the lack of production offensively following the quick start. “We were dropping balls, (committing) penalties and, as I said before, you can’t do that against a team like Air Force. That’s what fuels their team. They see that and they know they’re going to get the ball back and eat the clock for however long it takes.”

Remsberg paced the Falcons with 107 yards on 11 carries, while Roberts added 98 on 15. Air Force, which converted on 5 of 10 third downs, 3 of 4 fourth down and only punted once, ranks first nationally in rushing offense (336.0 ypg).

The Aggies did a pretty good job defending the dive in the first half, but failed to account for the pitch throughout the entire contest. This took it’s toll as the Falcons were eventually able to do essentially whatever they wanted to offensively in the second half.

“There was a little bit of a miscommunication of what the call was and who was doing what, so the bottom line, man, is it comes back to us coaching and getting these guys ready to roll, and there can’t be any miscommunication when you’re playing these guys,” Maile said. “And so if one guy’s missing (his assignment), you play the price, and that’s what happened.”

Peasley struggled throwing the ball Thursday as he completed 17 of 32 passes for 123 yards and one TD, vs. a pair of interceptions. The sophomore signal caller also finished with 53 of his team’s 109 rushing yards.

Nick Heninger recorded a career-high 14 tackles for USU, which got 10 tackles from Kevin Meitzenheimer, eight from AJ Vongphachanh and seven from Shaq Bond. Meitzenheimer returned to the lineup after missing the previous game due to COVID-19 protocol. Justus Te’i had a sack for the Aggies, which is only the second sack the Falcons have allowed during the 2020 campaign.

“It’s Air Force, right, so you’ve got to be disciplined and you don’t win games if you’re 90 or 95 percent disciplined because if you give up a big play, they scored, they capitalized on three of those in the first half,” Heninger said. “I thought we were doing a good job shutting them down for the most part, but we just didn’t get off the field on those third downs and then that fourth down at the beginning.”

• The Falcons have won five of their last six games against the Aggies and now lead the all-time series 6-3.

• Sophomore running back Cooper Jones made his Aggie debut.

• All three of Kotsanlee’s punts were downed inside the AFA 20-yard line.