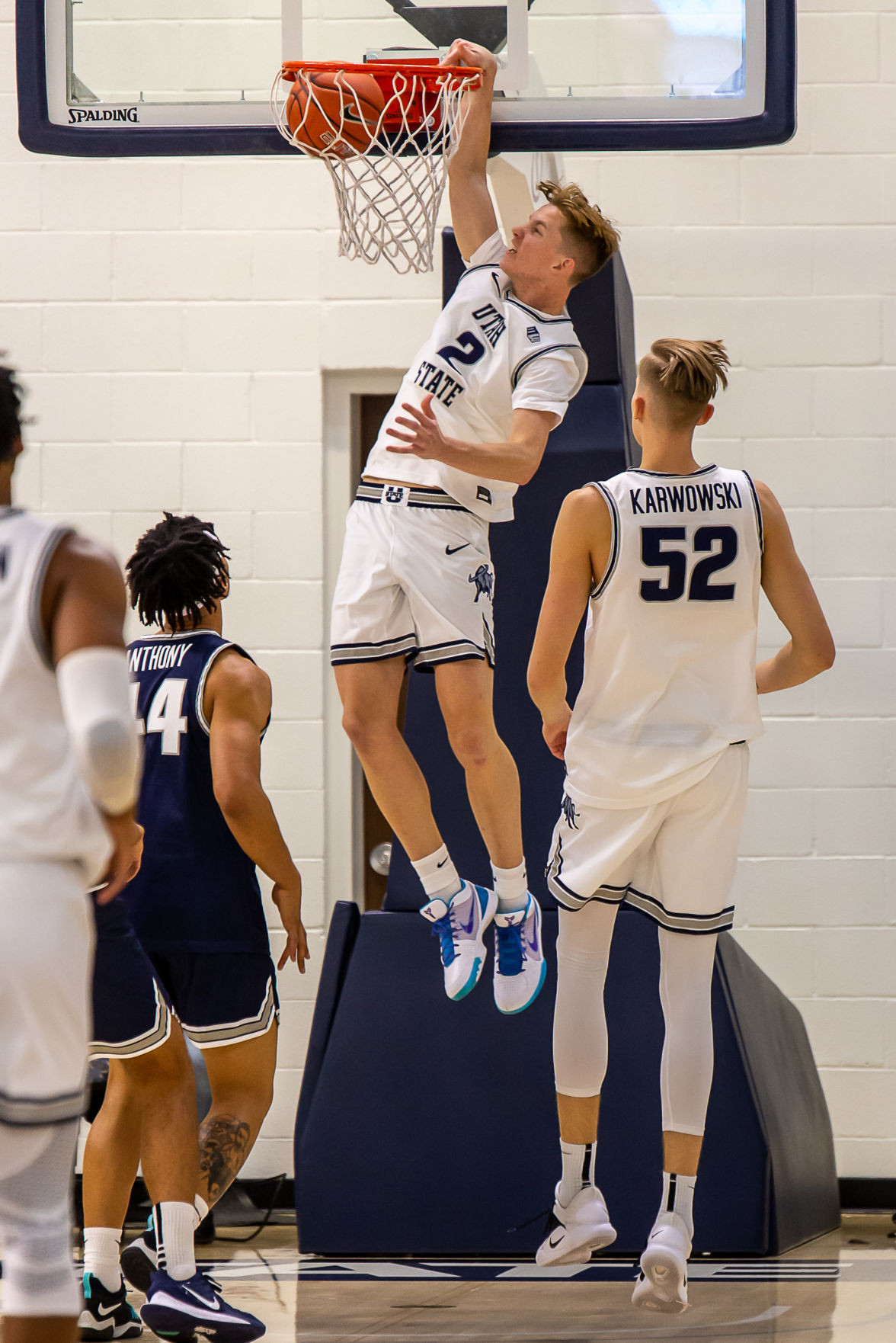 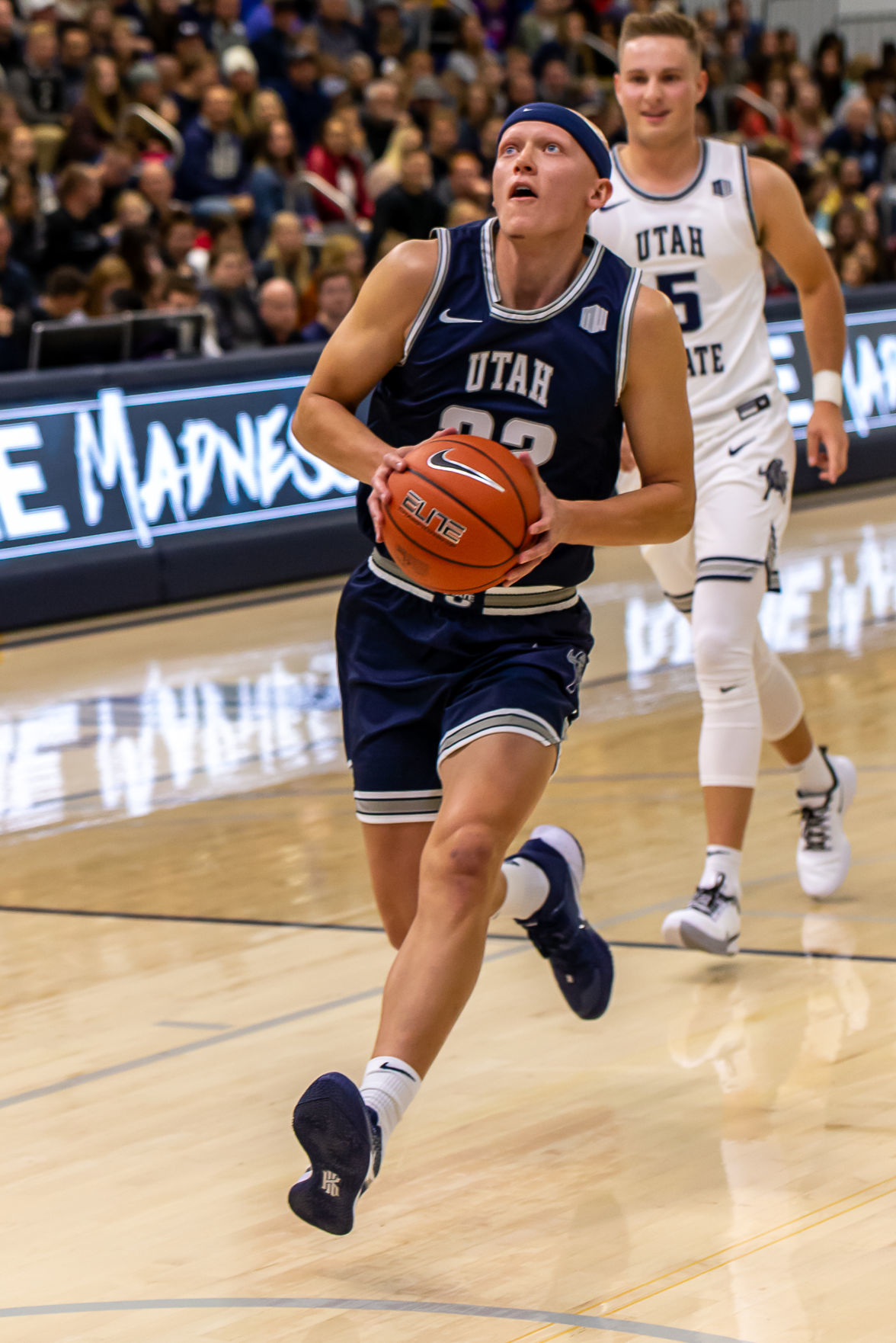 Utah State sophomore guard Brook Miller goes up for a dunk in a scrimmage during Aggie Madness Thursday night. 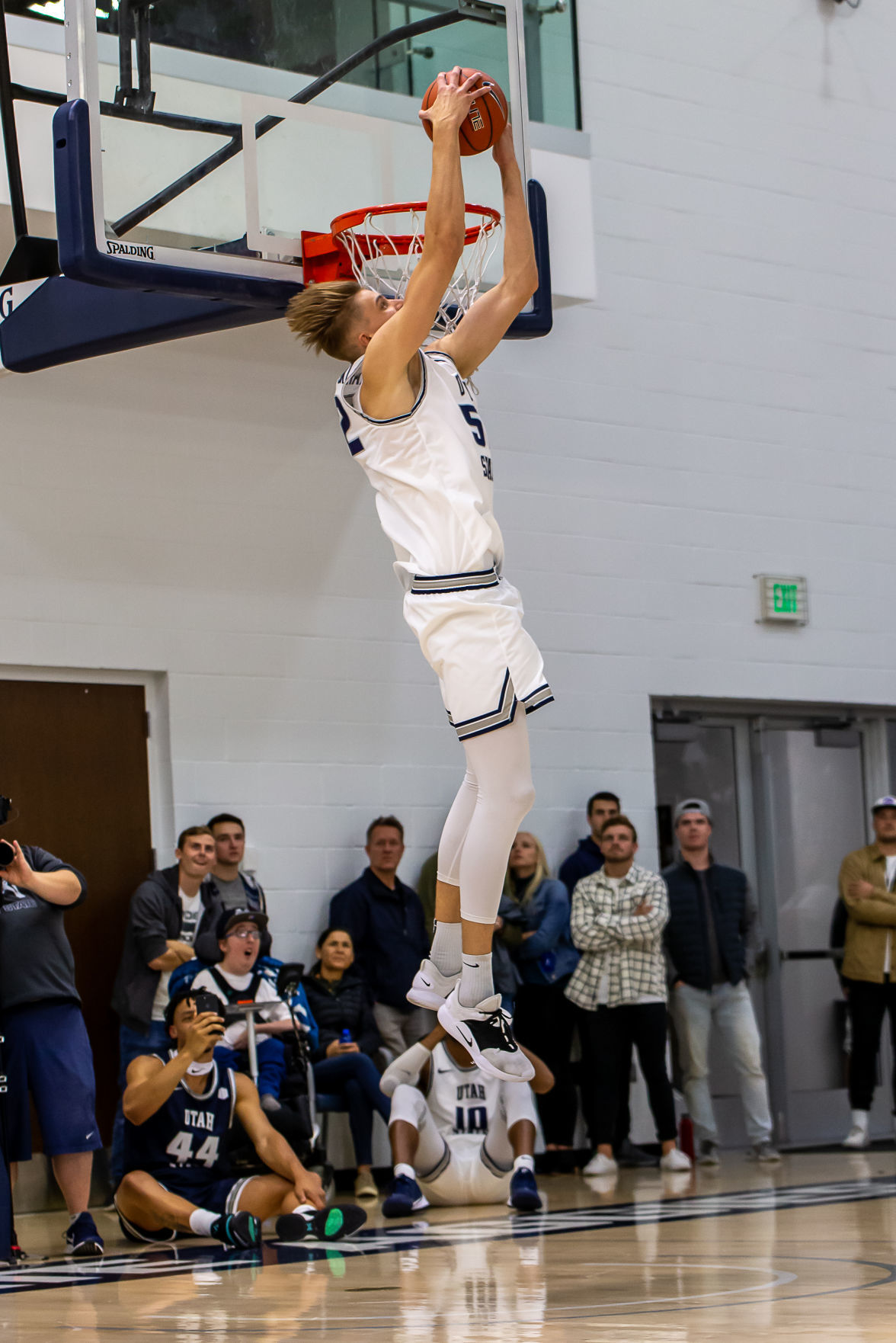 Utah State center Kuba Karwowski was the runner-up in the dunk contest Thursday night as part of Aggie Madness.

Utah State sophomore guard Brook Miller goes up for a dunk in a scrimmage during Aggie Madness Thursday night.

Utah State center Kuba Karwowski was the runner-up in the dunk contest Thursday night as part of Aggie Madness.

Being the most popular Utah State basketball player at Aggie Madness did not help Justin Bean repeat as dunk champion.

There is a new dunk champion, and his name is Sean Bairstow.

The 6-foot-8 freshman guard went to a sudden-death dunk off against 7-2 junior center Kuba Karwowski and prevailed in a fan vote. Bean, who shocked many by winning in 2018, did not put down a successful dunk Thursday night.

“They just couldn’t wait to go dunk and play the NBA All-Star game,” USU men’s head basketball coach Craig Smith said with a smile. “It gives me goose bumps to talk about how the stands were packed. It’s fun to see the enthusiasm. Our student body is incredible.”

The Aggie men’s and women’s teams were introduced to fans as part of Aggie Madness, presented by Maceys. By the time the event on Kirby Court in the Wayne Estes Center began, there wasn’t even any standing room left. The place was packed with eager fans wanting to get a glimpse of the teams.

“It was an exciting night,” Smith said. “It’s a great night for our guys. To see it packed like it was tonight with standing room only on the sides, it means a lot to everybody in our program. It means a lot to the women’s team as well. It’s a sign that the season’s almost here. It’s such an awesome day. I know our guys really look forward to it.”

“Our promotions and marketing team did a great job,” USU women’s head basketball coach Jerry Finkbeiner said. “I saw the script yesterday and said, ‘No way can they pull it off in an hour with everything happening.’ But it was like popcorn. It really went well. It went smooth. It was a great college-aged fan base here tonight. They really promoted that group to be here, and they showed up and supported. The Aggies are going to be pretty good this year on both the men’s and women’s side.”

There was plenty of action to keep the fans entertained during the just more than an hour of action. During player introductions, Bean, reigning Mountain West Conference Defensive and Freshman of the Year Neemias Queta and reigning MW Player of the Year Sam Merrill drew the biggest cheers.

Queta did not participate in the scrimmage as he is recovering from a knee injury. He was dressed Thursday night and warmed up, but did not see any action.

During the men’s scrimmage, it became what Smith described as a NBA All-Star game. Out of the 23 field goals made by both sides, 14 were dunks — four of the alley-oop variety. In fact, the scrimmage began with a alley-oop from Abel Porter to Bairstow right out of the gate.

“We have much more physicality than last year, top to bottom,” Smith said. “Our length is obvious. ... It’s exciting, but we need to get caught up to speed. ... It’s fun to see our improved physicality, athleticism and size.”

Even Merrill got into the act, putting down sort of a dunk late in the scrimmage for his only points. Klay Stall and Bairstow led the White team with six points each in a 27-26 win over the Blue, who was led by Diogo Brito with a trio of 3-balls for nine points, while Bean chipped in eight points.

“Man, the crowd loves Bean,” said Smith during the scrimmage after one of Bean’s four buckets.

The Aggie men also proved they can also shoot from distance. Seven of the remaining nine field goals made during the scrimmage were from long range.

“We worked on that area (3-point shooting) a lot this summer,” Smith said. “I thought we were shooting better at the end of last season. ... We have to develop some consistency in that area and so far I like what we see.”

In a 3-point shooting contest, Brock Miller was the top male as he made 13 0f 15 shots in the final round against Alphonso Anderson. In the battle of the sexes, Cache Valley native Lindsey Jensen-Baker got the better of Miller. She made 11 of 15, while he made 8 of 15.

“Lindsey Jensen-Baker may be the surprise of the season,” Finkbeiner said. “If we started tonight, she would be a starter for us. It was fun to see her win the battle of the sexes. Lindsey has paid her dues. I’m expecting good things from her.”

Jensen-Baker had a good night. The senior who played high school ball at Sky View came out playing aggressive in the women’s scrimmage as she scored the first points for the White team on a steal and layup. Jensen-Baker finished with four points, several steals and rebounds.

“Lindsey is a fifth-year senior and really hasn’t had a chance yet,” Finkbeiner said. “... Lindsey had an incredible high school year and scored a lot of points, Gatorade Player of the Year for Utah. Then had an injury, diabetes and played behind two pretty good players. The stars are lining up right now.”

Kamalu Kamakawiwo’ole also had four points during the women’s scrimmage.

There were many other contests involving students and athletes. There were also giveaways throughout the hour of action.

It ended with the dunk contest. Bean, Bairstow, Karwowski and Liam McChesney were the contestants. It came down to Bairstow and Karwowski. Each received a score of 39 out of 40 on their first dunks in the finals. A playoff dunk resulted in scores of 40 for each. That’s when it turned to the fans to decide it.

Merrill and Jensen-Baker wrapped up the night by addressing the crowd.

“On behalf of the men’s basketball team, thanks for coming out,” Merrill said. “This was a great showing. We are really excited and hope to fill the Spectrum on Nov. 5, when Montana State comes to town. Go Aggies.”

“I want to thank you all for coming,” Jensen-Baker said. “Come out to our games and support.”

The 2019-20 season will begin for the men Oct. 30, when the Aggies host the College of Idaho in an exhibition game at 7 p.m. The women’s exhibition will take place on Nov. 2, as they host Arizona Christian at noon.