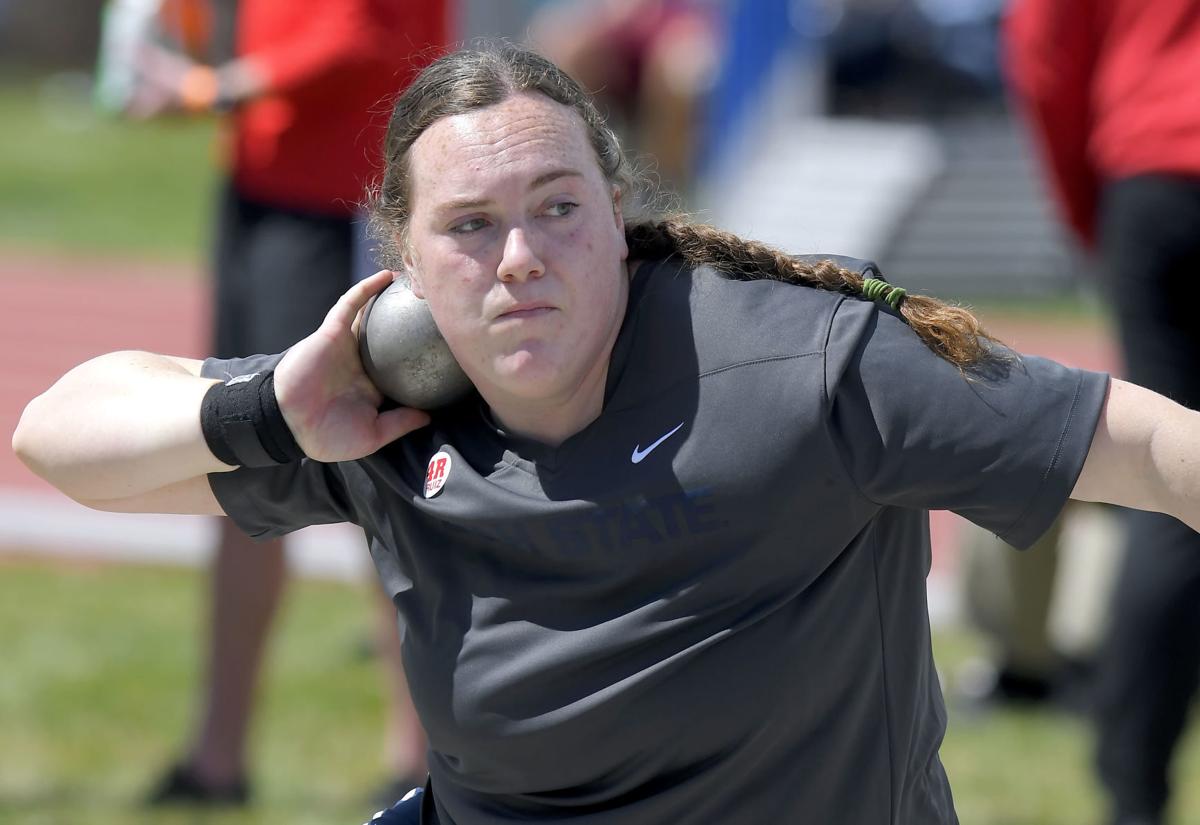 Utah State’s Maia Garren competes in the shot put at the Aggie Invitational on Saturday. Garren took first in the event with a throw of 52 feet. 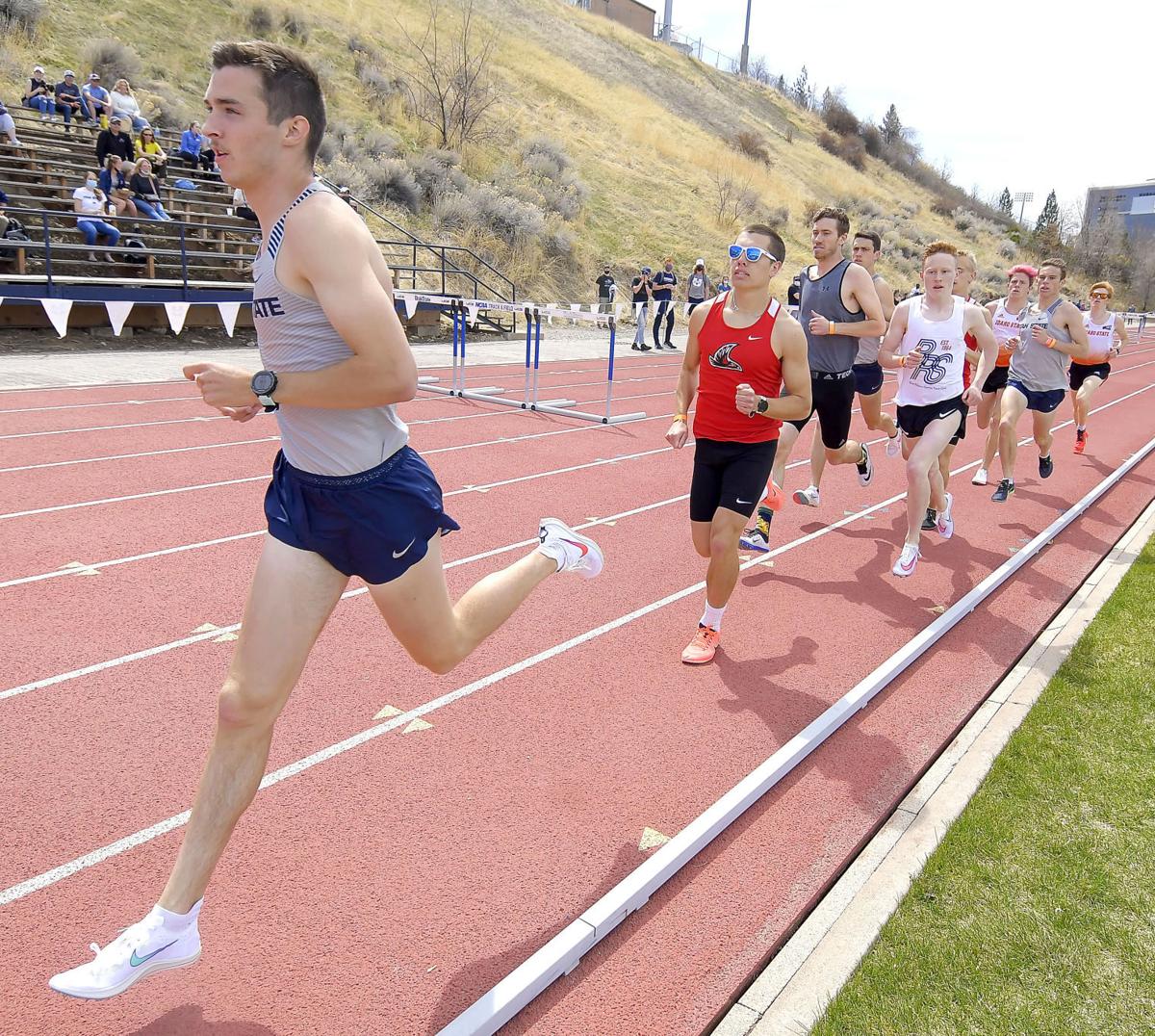 Utah State's Mark Crandall competes in the 1500 meters at the Aggie Invitational on Saturday. Crandall won the event with a time of 3:53.30.

Utah State’s Maia Garren competes in the shot put at the Aggie Invitational on Saturday. Garren took first in the event with a throw of 52 feet.

Utah State's Mark Crandall competes in the 1500 meters at the Aggie Invitational on Saturday. Crandall won the event with a time of 3:53.30.

Standout throwers Kyle Morris and Maia Garren certainly made the most of their final opportunity to compete at home.

Both Utah State seniors won a pair of event titles at the two-day Aggie Invitational, which concluded on a sunny Saturday afternoon at Ralph Maughan Track Stadium. It was USU’s first home meet in two years.

It was a memorable Day 1 of competition for Morris, who proved he is one of the nation’s elite competitors in the javelin at the Division I level with his career-best toss of 230 feet, 5 inches. That mark not only ranks third in program history, but the Hillsboro, Oregon, native currently ranks 16th nationally in the event this season.

“It felt incredible,” Morris said in a press release. “The moment the javelin left my hand, I knew it was gone and all the work I’ve been putting into this event has finally paid off. Also, the energy of the meet helped so much. My teammates were throwing well and that motivated me to do the same. My family was able to attend, which made it just the absolute perfect day.”

Morris, who started his collegiate career at the University of Montana, followed up that performance by reigning supreme in Saturday’s shot put with a heave of 56-6.

“I am honestly really pleased with how I competed today,” Garren said in a press release. “While inconsistent, I know that big things are coming. Getting close to all-time PRs in both events is a great feeling.”

The other Aggie to capture gold medals in a pair of individual events was former Box Elder standout hurdler Alexis Koetitz. The junior beat all comers in the 100-meter hurdles (14.05 seconds) and the 400 hurdles (1:02.05). The Lady Aggies went 1-2-3 in the longer of the two races.

“Competing at home brought together the community of parents and friends who haven’t seen their athletes compete on the track in over a year,” Koetitz said in a press release. “All the training and hard work that the Aggies are accomplishing in practice is finally able to come to light.”

Morris, Garren and Koetitz headlined a solid two days of competition for the Aggies, who competed against athletes from BYU, Idaho State, Weber State, Utah Valley, Southern Utah, Westminster and Northwest Nazarene. USU was victorious in 11 events on the women’s side and eight on the men’s.

Green Canyon product Ben Hoffman placed fourth for the Aggies in the high jump by clearing the bar at 6-6.75. Hoffman was a state champion in the event as a prep senior.

The Aggies closed out their spring season on a five-match unbeaten streak, thanks to a gratifying 3-0 triumph over Wyoming on Sunday at Bell Field. USU (5-4-1) went 4-0-1 in its last five games to bounce back from a 0-3 start.

USU netted all three of its goals after halftime, and two of them were courtesy of Cache Valley natives. Logan product Whitney Lopez finished top shelf from point-blank range at the 52:24 mark. Lopez’s first collegiate goal was assisted by Sara Noel-Taylor, who battled her way through two Wyoming defenders on the sequence.

Ridgeline graduate Marli Niederhauser volleyed home a cross from Ashley Cardozo less than four minutes later, and Cardozo buried a penalty kick in the 85th minute to provide the exclamation point. Kami Warner was also credited with an assist on Niederhauser’s third goal of the season.

Cardozo was selected as the Mountain West co-Offensive Player of the Week for her efforts this past weekend. The midfielder also scored both Aggie goals in their 2-1 triumph at home over Colorado State on Friday.

Diera Walton recorded her fourth shutout of the season in goal for the Aggies, who outshot the Cowgirls 18-6, including a commanding 12-2 edge in shots on goals. Walton denied Wyoming on a penalty kick in the 55th minute — her third PK save of the spring.

Prior to the match, the Aggies honored starting defender Taylor Garza-Freeman, who is the only senior who won’t be back for the fall season. Garza-Freeman is on track to graduate on May and will pursue a master’s degree in social work at the University of Houston.

During the second half of the Mountain West-only season, USU exacted revenge against Wyoming (2-7-0), CSU and divisional champion New Mexico. The Lobos (9-1-0) will host San Diego State (8-2-0) in the MW championship game on April 17.

For the first time since 2018, a Utah State volleyball player has been named to the all-conference team. Middle blocker Corinne Larsen garnered a spot on the honorable mention squad.

The junior contributed with 125 kills, 60 total blocks and hit .283 this past season.

“We are excited for Corinne and our team,” USU head coach Rob Nielson said in a press release. “We’ve come so far and we are just getting started.”

UNLV senior outside hitter Mariena Hayden was selected as the MW Player of the Year, and UNLV’s Dawn Sullivan the Coach of the Year.