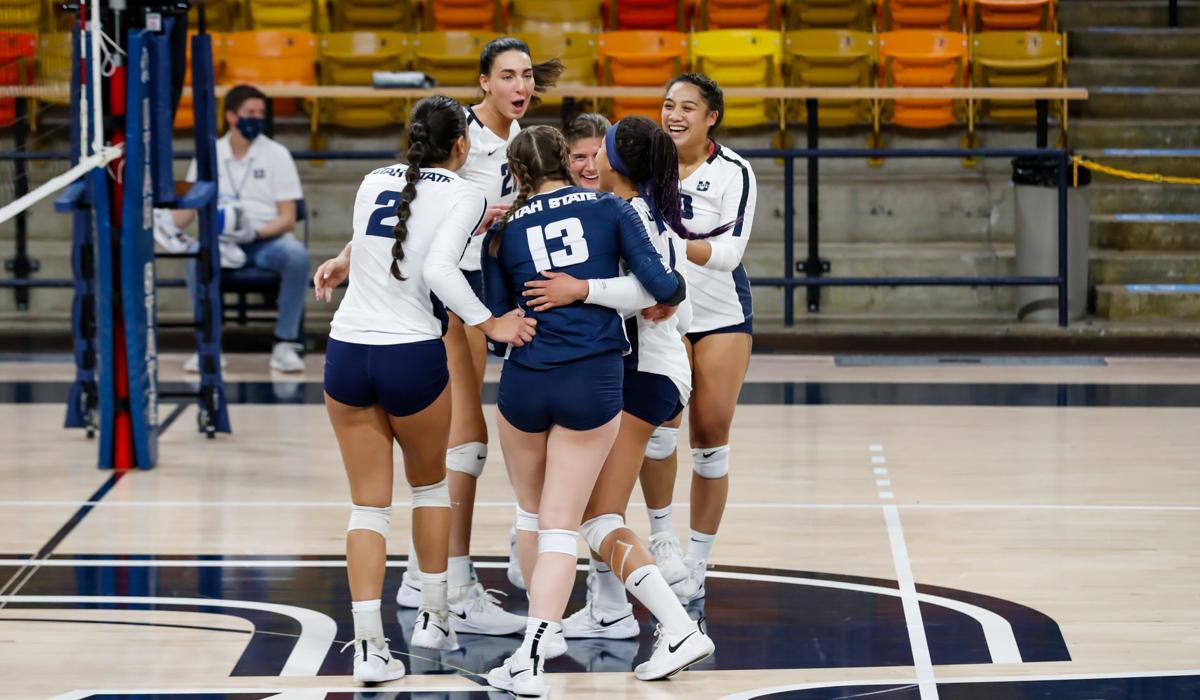 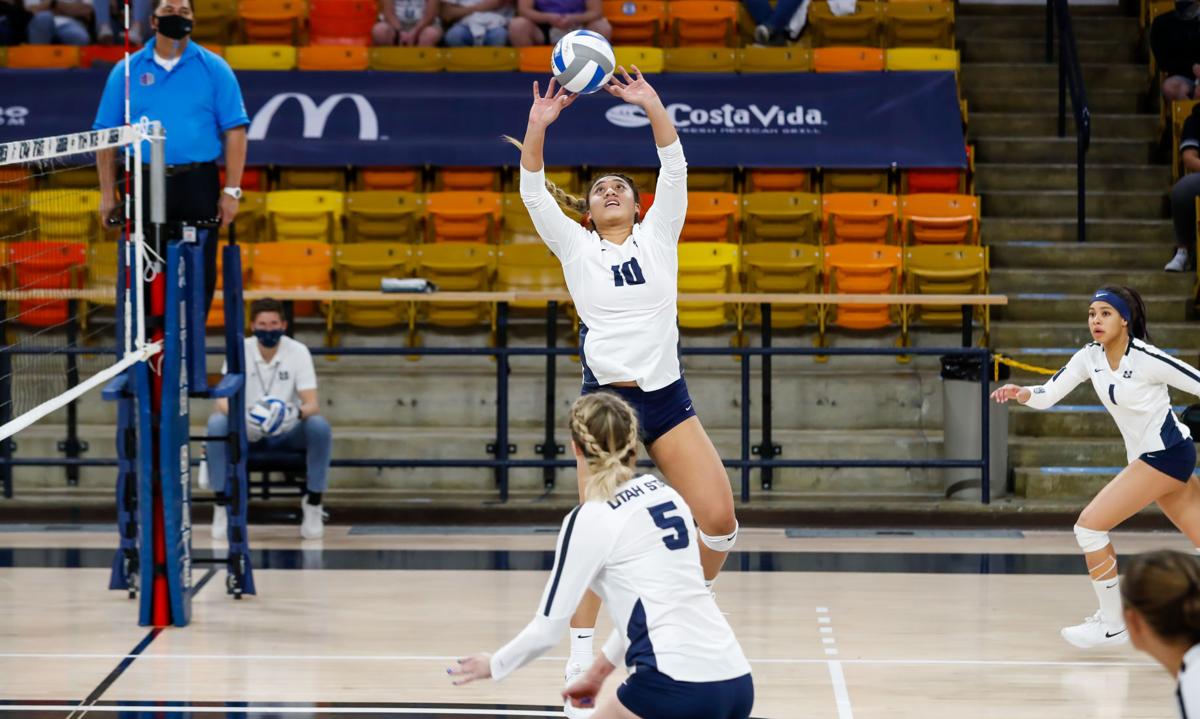 Utah State setter Kalena Vaivai (10) sets the ball for a teammate as Bailey Downing (9) and Kristy Frank (1) prepare for the attack against San Jose State Thursday night in the Spectrum. 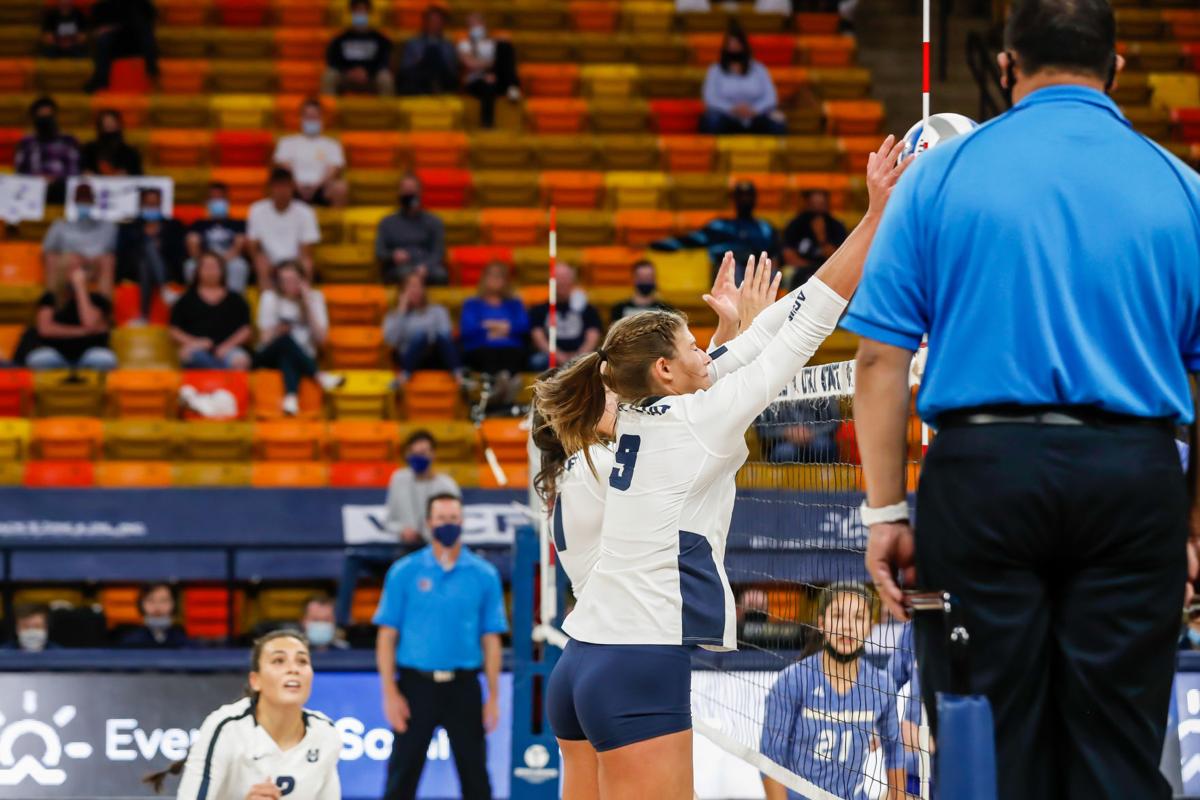 Utah State setter Kalena Vaivai (10) sets the ball for a teammate as Bailey Downing (9) and Kristy Frank (1) prepare for the attack against San Jose State Thursday night in the Spectrum.

It’s too bad the abbreviated college volleyball season is coming to an end this weekend.

The Aggies are at full strength and starting to come together as a team. Thursday night was another step forward for Utah State as San Jose State visited the Dee Glen Smith Spectrum.

“This was a great way to end the home season,” first-year Aggie head coach Rob Neilson said. “... We are playing our best volleyball of the year. It was a lot of fun.”

Seniors Bailey Downing and Elle Nesbitt were honored before the match. The duo expressed their joy in getting a win in the home finale.

“It was super fun tonight, we put it all out there,” Downing said. “I love playing with these girls. The energy we have together is something special.”

“It feels so good,” Nesbitt said. “We’ve been working so hard since day one in August to get to this point. So, it feels so good to end at home with a win.”

Downing, an opposite side hitter, finished with eight kills, seven digs and four block assists. With one match left in the season at New Mexico, Downing has moved into 10th place on the career blocks list at USU with 312.

“It’s extremely rewarding to get to play, because we have grinding in practice and working with the new coaching staff,” Downing said. “It feels good to get some wins and see the hard work pay off. ... I’m super grateful that I’ve been able to be an Aggie. I’ve loved every second here.”

Nesbitt, a setter, had seven assists, an ace and four digs.

“We’ve been clicking in practice, so it was good to click in a match,” Nesbitt said. “It was fun to play in front of fans and enjoy Spectrum Magic. ... It has been a fun year of growth, improvement and learning.”

After dropping their first five matches to start the season, the Aggies (5-9, 5-9 MW) have now won five of their last nine. Being healthy and learning the system of the new coach is starting to pay off.

“This is the first two-week stretch that we have been able to train together as a complete team,” Neilson said. “Our best volleyball is out in front of us. We are still getting better.”

Leading the way for the Aggies Thursday night was freshman Tatum Stall with 17 kills. Autumn Spafford had a season-high 10 block assists, while Corinne Larsen served up four aces.

Abby Peterson had 15 digs to lead the team, and Kalena Vaivai finished with 28 assists.

“I thought we all played great,” Larsen said. “It was a good team win. ... We are beyond grateful to be able to get out and play. It was a real bummer when everything started getting canceled, but when they gave us a shortened season, it was good to see our hard work pay off.”

The match started as a back-and-forth affair. There were seven lead changes and 12 ties in the opening set before USU finished it off with a 6-1 surge as Stall had two kills, as did Downing, including the set winner.

“We just needed to let loose and do what we know we can do and let our skill take over,” Downing said. “Once you let loose, it kind of goes from there.”

In the second set, it looked as if the Aggies were cruising as they built a 20-15 lead and still were in command at 23-20. However, the Spartans took advantage of three hitting errors and like USU had in the first set, finished with a 6-1 run to even the match at 1-1.

It looked as if the momentum had switched to the visitors as they built a 10-4 lead to start the third set. Neilson called a timeout.

“This team has done that all year long,” Neilson said. “They relaxed, believed in each other and kept competing. All of the sudden the momentum turned. ... I just wanted to calm them down (with the timeout). We were spinning a little bit. We just needed to settle down and trust each other.”

The Aggies scored the next four points and ended up going on an 11-2 run to take the lead. A kill by Stall gave the hosts a 15-12 lead. USU would stay in front the rest of the way, finishing with a 5-1 surge to end the third. Larsen served up an ace for the final point.

“Coach always reminds us all the time that we can dig ourselves out,” Larsen said. “We just needed to take a deep breath and go play.”

After trailing early in the fourth, the Aggies used a 5-0 run to take the lead for good. Larsen recorded back-to-back aces as USU took a 10-5 lead.

“I think it has been kind of our theme all season to find ourselves in holes, but we always dig out, which I think says a lot about the team,” Larsen said. “So we call ourselves the comeback kids.”

“Getting this win is the cherry on top of the cake,” Larsen said. “It’s been a really tough season with COVID, and we’ve had a lot of people out. It felt good to come out for our seniors and finish off with a win.”

USU travels to New Mexico on Saturday for its final match of the season.