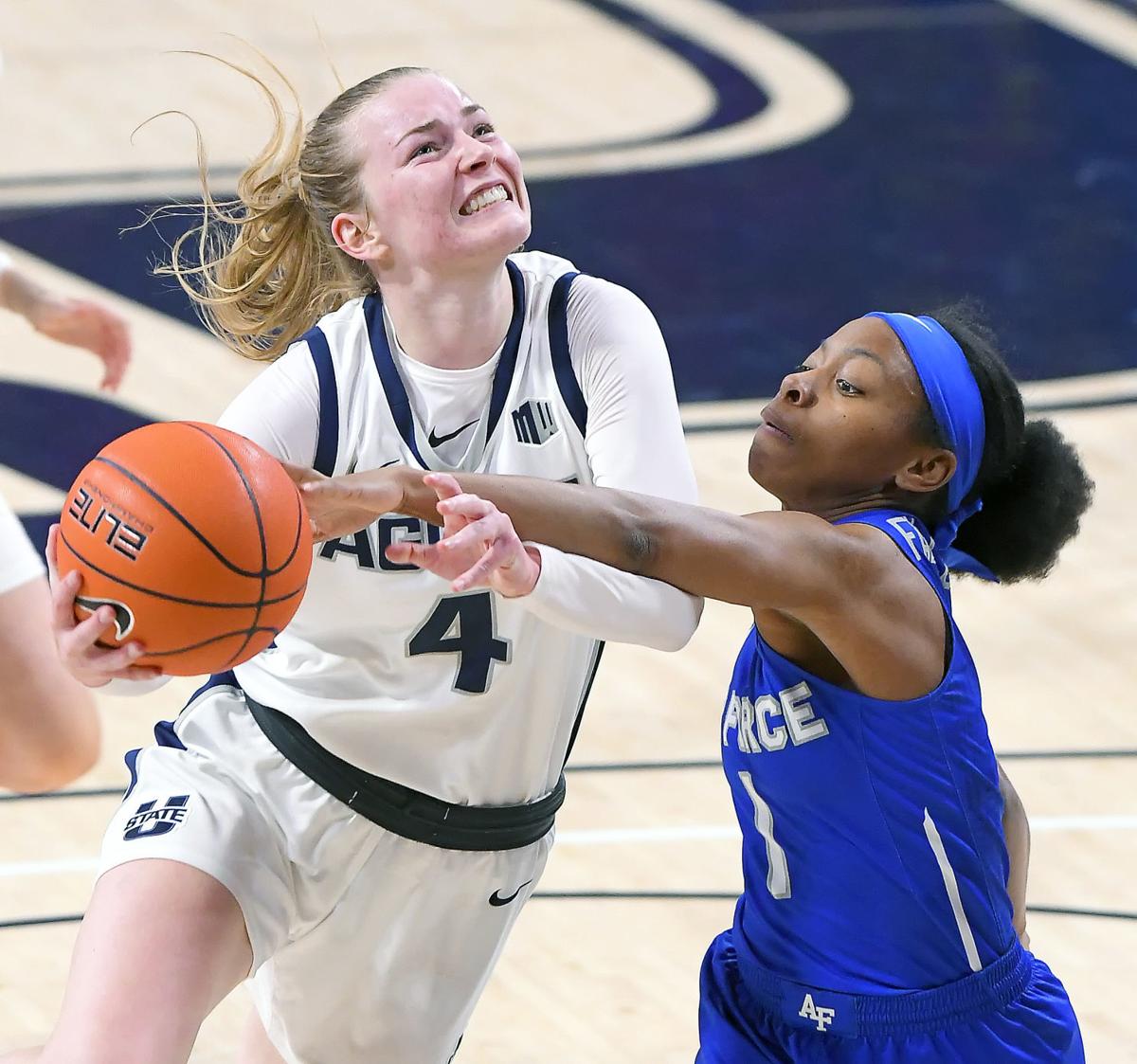 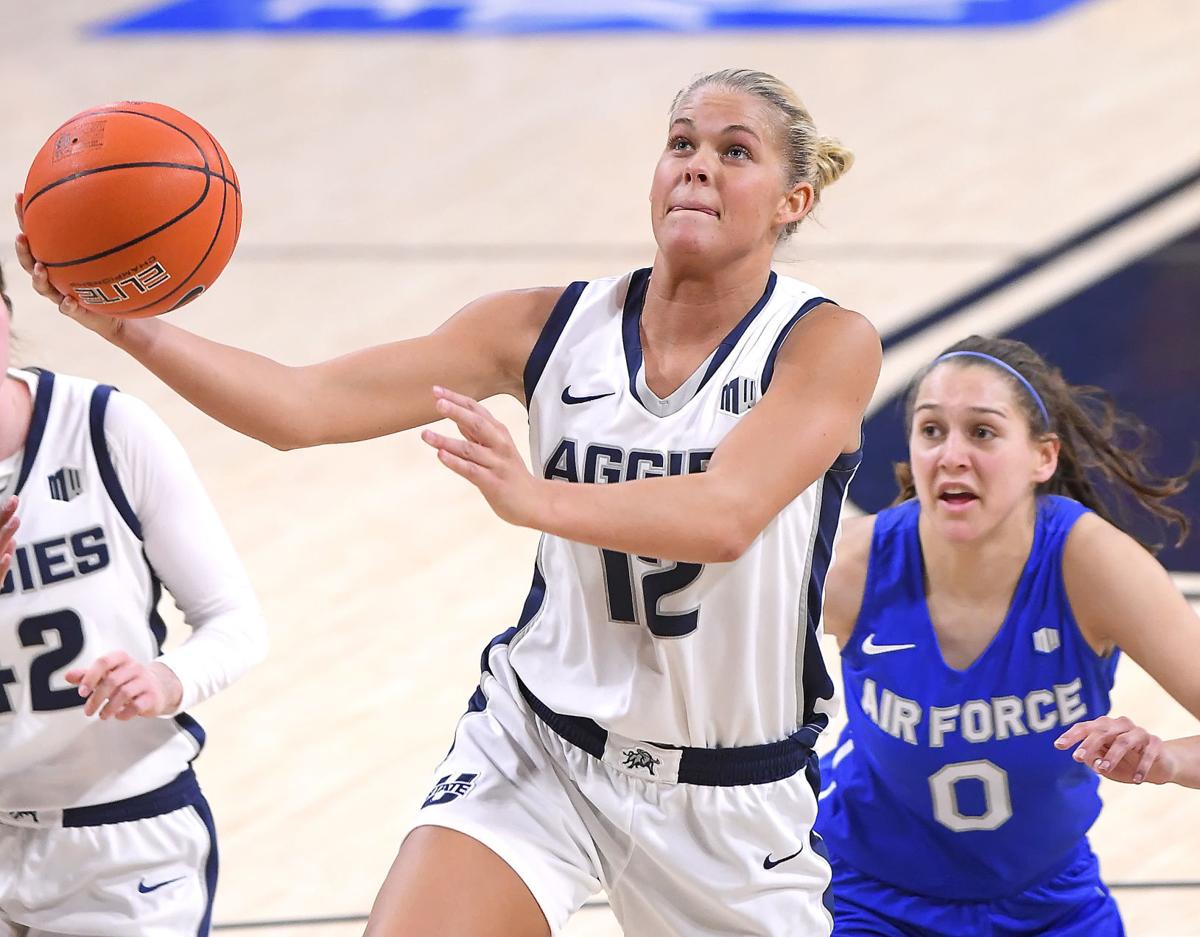 Wednesday’s game didn’t open looking like a fight that Utah State wanted to participate in.

Sure, some of that could have been settling into the game early on. But all metrics of physicality were trending in Air Force’s favor. Ultimately, the Falcons were able to secure a 62-45 victory over the Utah State women’s basketball team, stretching the Aggies’ losing streak to four games.

The opening shot of the game was a made 3-point attempt from Falcons guard Briana Autrey, which set Air Force on a 8-0 run. Utah State countered with a 6-0 run of its own, playing with much more of that aggression that it lacked in the first five minutes of action. Leading the charge for the Aggies in that respect was senior forward Hailey Bassett, who picked up three blocks in the first half, but ultimately finished with just those three. While Bassett continued her ascension into a true defensive presence, she again left room for improvement in the rebounding department. Bassett ended the first half with no rebounds in 17 minutes of action.

Instead, the catalyst in that area was another senior player who has improved dramatically as the season has progressed. Forward Marlene Aniambossou played just eight minutes, but was ultra efficient in her time on the court and completely changed the anatomy of the team. In just eight minutes, Aniambossou had six points, three rebounds and two drawn charges.

“She’s one of the strongest — or the strongest — player on our team,” Bassett said of Aniambossou. “She’s very positive and strong, she can do a lot, it’s quite amazing.”

But there was a cooling-off period that changed the momentum as the second half got underway. In the third, Utah State scored just nine points, largely due to poor shooting (3 of 15). A lot of those chances came at the rim, and yet, the Aggies still were not able to convert.

“Whenever Marlene misses her layups and Hailey’s not getting as many touches then we need to get other players to take over,” USU interim head coach Ben Finkbeiner. “Steph (Gorman) went to the basket a few times, missed one or two, again Marlene missed a couple, we had some nice easy shots in there that we just weren’t able to finish.”

Another back-breaker for the Aggies seemed to be the foul trouble that senior guard Lindsey Jensen-Baker fell into at the start of the third quarter. Three of her fouls came in quick succession early in the game, but the fourth happened just one minute into the second half. She didn’t play another minute in the third quarter. And Utah State suffered massively without its second-leading scorer on the court.

“It did, for sure, she’s someone who pushes the ball for us, she’s kind of our penetrator and paint-touch person,” Finkbeiner said. “I probably played her a little earlier than I did, but it definitely hurt us, it definitely set us off balance. Depth is already something we talk about a lot and that just forced us to do even more with it.”

Despite the scoring woes, Utah State hung tough and trailed 38-35 heading into the fourth quarter. However, tired legs and mental fatigue grabbed hold of the Aggies and constricted their confidence in the final 10 minutes, leaving a sense of urgency that they were not able to manage.

“I think everyone just feeds off each other’s energy, and no one was really saying anything,” Bassett said. “I feel like I should have, being a senior, should have been like ‘let’s go, let’s go’ try to get something. But especially the fourth quarter, it was very quiet and we shouldn’t be quiet in tough games.”

Air Force did just a couple of things particularly well in this game: rebounding, passing and finding open players to score. It wasn’t that the Falcons were the far superior team, they just played better than Utah State on the night. The lack of consistency has been a burden on the team this season, lately, that has manifested itself in the shooting game. The Aggies made just 2 of 14 attempts from beyond the arc, and this was just a few days after the team shot 8 of 19 on the road against San Diego State. Gorman is one of those players that can really help the Aggies once she finds her shooting form of a season ago.

“I think she’s been inconsistent this year obviously. She started off the year as by far our best scorer and leading scorer and then she took a big dip,” Finkbeiner said. “She’s playing some very, very heavy minutes and playing three positions for us … so maybe we’re putting her in too many situations possibly. But she’s such a nice player and such a smart player that she’s kind of got to play through it a little too.”

Next up for Utah State is a trip to Reno to face Nevada Saturday afternoon. Both teams are still looking for the first win in conference play.