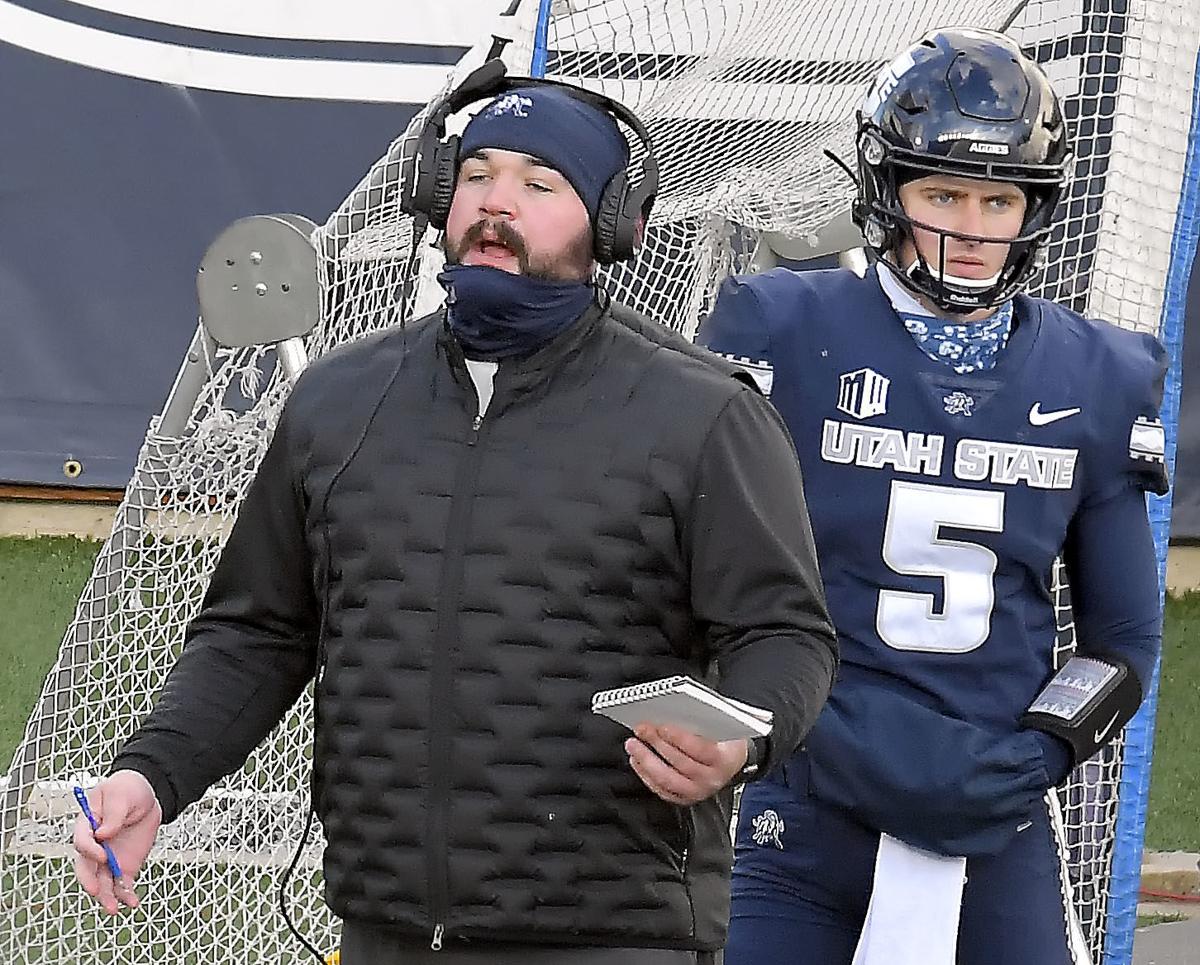 Utah State quarterback Cooper Legas (5) stands next to Austin Stephens during the second half of Saturday’s game. The redshirt freshman will start on Thursday at Wyoming. 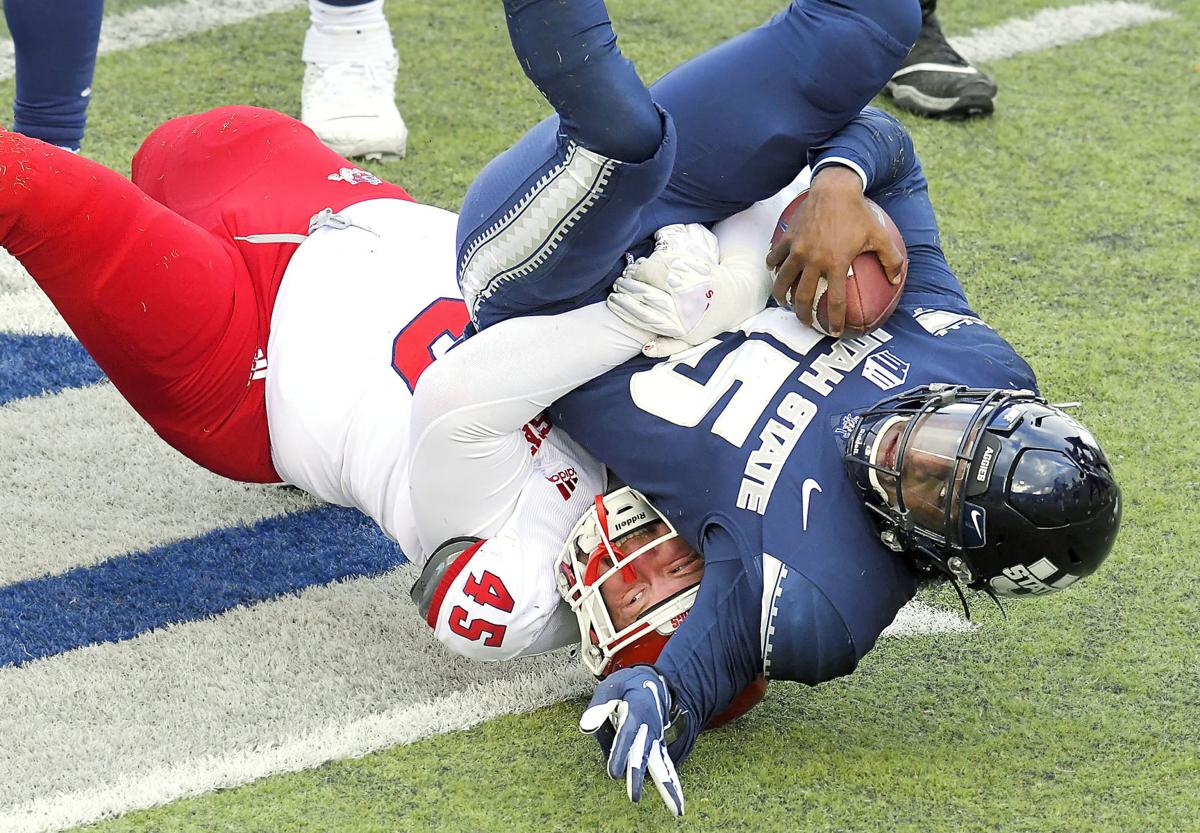 Utah State quarterback Cooper Legas (5) stands next to Austin Stephens during the second half of Saturday’s game. The redshirt freshman will start on Thursday at Wyoming.

Legas was listed as USU’s third-string quarterback on the depth chart at the beginning of the season, but has since been bumped up two spots. Jason Shelley, the starter in each of the first four games, has been kicked off the team. That announcement was made Sunday in an official press release that the University of Utah transfer had been dismissed “for a violation of team rules.”

Second-string quarterback Andrew Peasley saw some playing time against Boise State, San Diego State and Nevada, but was not on the field for last Saturday’s 35-16 Homecoming game loss to Fresno State at Maverik Stadium. Peasley is currently undergoing COVID-19 protocol and will be unavailable for Thursday’s game, Maile said.

That means Legas will be thrust into action Thursday against Wyoming, a daunting task for certain, but one Maile is confident the former Orem High star can handle.

“Cooper’s a winner, man,” Maile said. “He’s a competitor and so that’s one of the main reasons why we recruited Cooper in the first place is he was a champion in three different sports. So, not only did he lead his football team as a team captain to a championship in high school, he was a wrestling state champion and he was a javelin thrower (state) champion.

“You know, you can kind of (get lost in the mix) a little bit with football because it’s a team sport, but when you’re talking about wrestling and the mentality it takes to win a championship in wrestling, that’s an individual sport where you call for no help and you can’t turn to anybody, and so Cooper’s a winner at the end of the day, and we’re looking forward to his leadership and his competitiveness to lead the Aggies to a W.”

Indeed, Legas flat-out sparkled in high school as he was a two-time state champion in all three sports. He captured both of his 4A wrestling titles while competing in the 195-pound weight class as a junior and senior, and beat all comers at the 4A State Track & Field Championships in the javelin as a sophomore and junior.

Legas helped propel the Tigers to 4A crowns in football as a junior and senior, and was a first-team all-state honoree both years. As a senior, the Orem native completed 69.7 percent of his passes for 4,338 yards and 48 touchdowns, vs. 11 interceptions. He also racked up 1,077 yards rushing and scored 15 times with his feet.

Both of those Orem football teams were loaded with talent, but Legas certainly proved himself against fellow Division I recruits at a high school All-Star game in Arlington, Texas, in December of 2018. Legas was the catalyst in his team’s come-from-behind 40-34 victory in the Blue-Grey All-American Bowl. Legas accounted for three touchdowns in the fourth quarter — two with his arm and one with his feet — as the West squad rallied from a 34-13 fourth-quarter deficit.

The 6-foot-2, 205-pounder signed with the Aggies in February of 2019, spurning scholarship offers from Arkansas, BYU, Air Force, Navy and Army in the process.

“Cooper is a smart kid, a younger kid, but he’s definitely smart,” said Scarver of Legas, who accounted for 5,191 yards of total offense and 52 TDs as a prep junior. “That man works hard. When he first got here in the summer (of 2019) when I was throwing with him, he’s got a real strong arm and he can zip the ball pretty much on the money every time. ... We’ve got him working hard in practice, he’s watching film and he’s going to be ready to go for sure.”

Legas will be backed up Thursday by fellow redshirt freshman Josh Calvin, who likewise was a 3-star recruit in high school. Calvin, who is listed at 6-2, 205 pounds, was also a part of USU’s 2019 recruiting class.

As a high school senior, the native of Bellflower, California, completed 53.6 percent of his passes for 2,010 yards and 23 TDs, vs. five INTs, for the Mayfair Monsoons. Additionally, Calvin, who also played basketball for the Monsoons, averaged 9.7 yards on his 14 rushing attempts. Calvin threw for 1,981 yards and 21 TDs as a prep senior.

As for Shelley, no specific information was provided in the press release regarding his dismissal from the team. Maile declined to comment further on the matter.

In USU’s loss to Fresno State, Shelley threw for a season-high 144 yards on 9 of 24 passing. No. 15 also rushed for eight yards, although that total would have been significantly higher had he not been sacked six times.

The USU-FSU game was televised on Fox Sports 2, and the broadcast panned over to a visibly upset Shelley during the fourth quarter. In the waning seconds of the game, Shelley was involved in an argument with one of his teammates.

Shelley transferred to USU in July after spending three seasons at Utah. The native of Frisco, Texas, was the Utes’ starting signal caller for five games in 2018 after Tyler Huntley went down with a season-ending injury. Shelley went 3-2 as the starter and helped propel Utah to the Pac-12 Championship game.

Starting safety Troy Lefeged Jr. will undergo surgery this week and is out for the rest of the season, Maile said Monday. The senior started both games he played in this fall — against San Diego State and Nevada — and contributed with 13 tackles and one pass breakup.

The junior college transfer was the Aggies’ leading tackler a year ago as he racked up 104, including 6.0 for a loss. Lefeged also forced three fumbles and recovered two more as a junior.