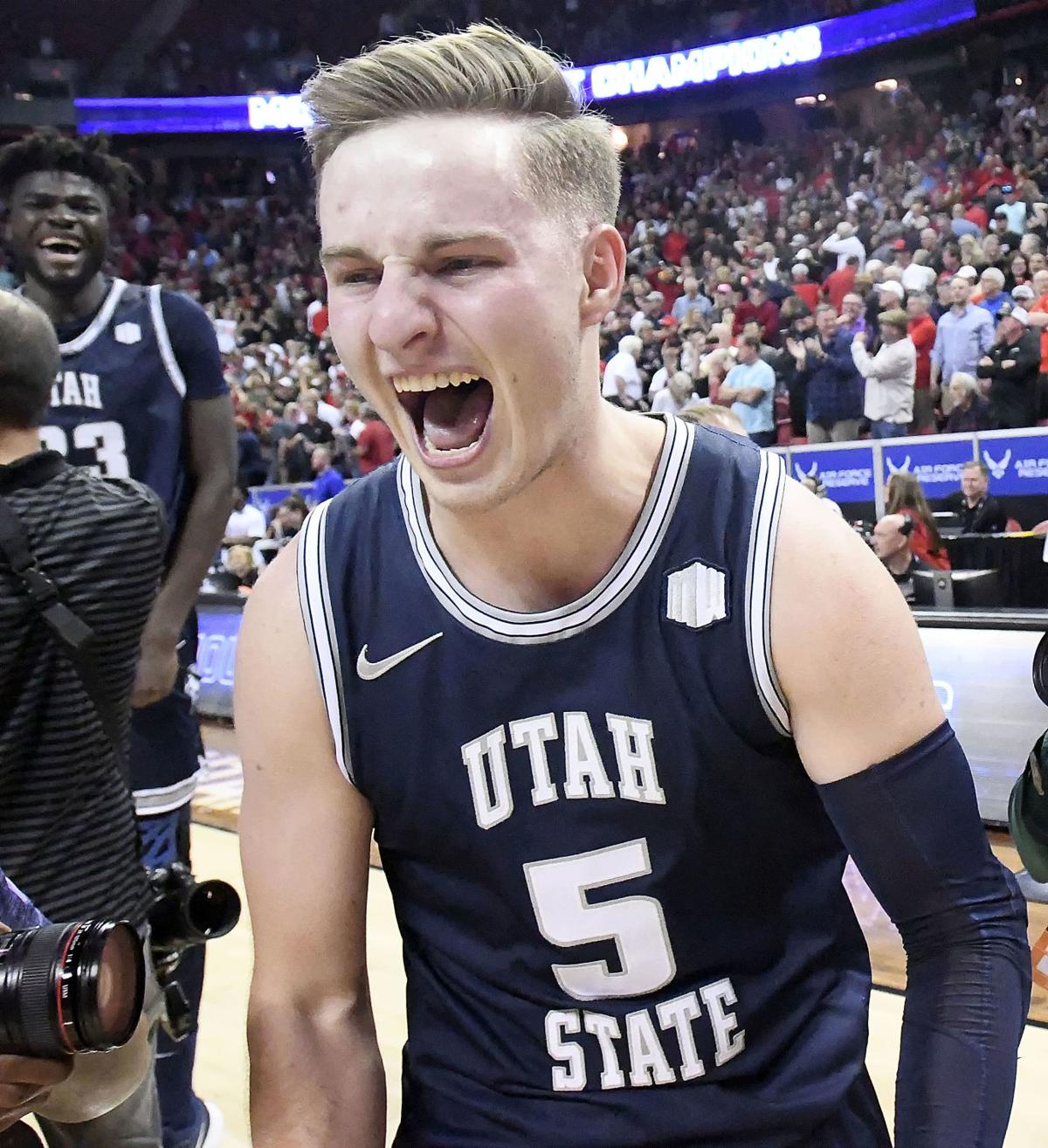 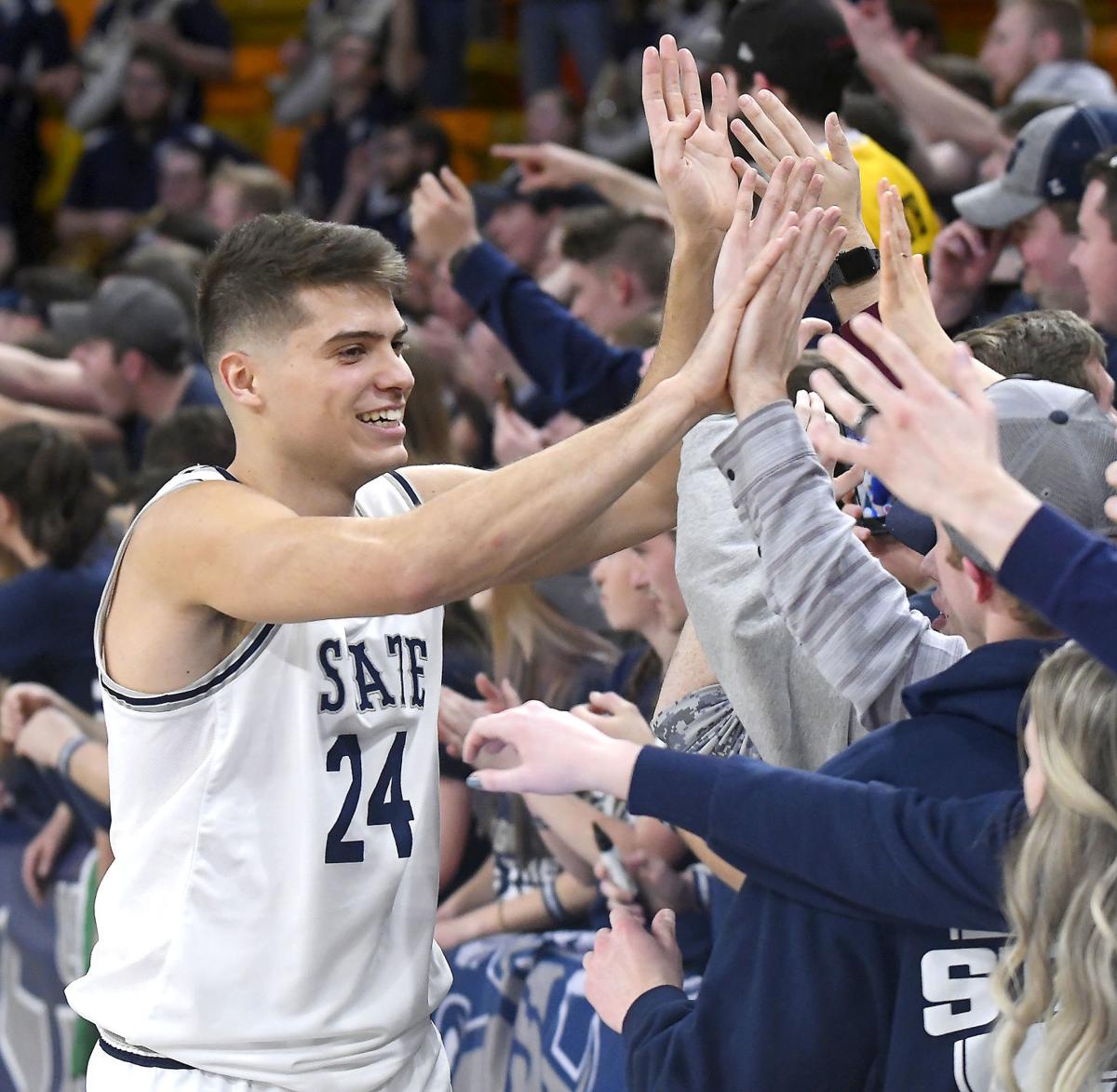 Two weeks ago, the Aggie men’s basketball team was getting ready to defend its Mountain West Conference tournament championship.

Utah State did just that, becoming the first Division I team this year to punch its ticket to the Big Dance. It was a memorable three games in three days in Las Vegas.

This week, the Aggies would have been somewhere other than in the Beehive State preparing to make some noise in the NCAA Tournament. That was before the coronavirus became a global pandemic.

Now, most of the Utah State athletes are not in Cache Valley, but they are not at some arena preparing to do better than last year either. They are scattered around the globe as school has gone online and gatherings of more than 10 people are discouraged. Most of the Aggies have been encouraged to return home.

It is definitely not how seniors Sam Merrill or Diogo Brito expected their final season at USU to end. Both recently spoke with The Herald Journal.

“In a few years when I look back, I will remember being a champion,” said Brito, who is still trying to decide if it is better to stay in Cache Valley or return to his native country of Portugal, which may close its borders soon. “We worked for that the whole year. ... When we look back, we will realize we couldn’t have done more because there was no more. It’s bittersweet. We have the Mountain West championship, the first at Utah State, and we did it twice in a row. On the other hand, we can’t make up for last year. That Washington game (in first round of NCAA Tournament in 2019), we just can’t make up for it. That is kind of sad.”

“It wasn’t exactly the way we wanted to go out,” Merrill said. “But in hindsight, couldn’t have asked for a better way, winning a tournament championship and to win it in such dramatic fashion.”

Merrill had three huge games at the tournament, earning the MVP honor at the end after averaging 27.7 points a game. He also hit the game-winning 3-point shot in the final seconds of the championship game against nationally ranked San Diego State.

“We were happy with what we were able to accomplish,” Merrill said. “For me personally, I felt like I was a different player in those three games. I felt like I was much more aggressive with my shot. I’m happy I was able to make some shots and help our team win.”

Brito averaged 9.0 points, 4.7 rebounds and 2.7 assists at the MW Tournament. He only had three points in the championship game, but it was a big bucket, and he came up huge against New Mexico.

“The last shot that I took as an Aggie was that buzzer beater at halftime,” Brito said. “I love the big games and big moments. I will always remember helping the team.”

The Aggies won the tournament title on March 7. By March 12, the NCAA Tournament was canceled. It was a wild 48 hours before the cancellation.

First it was announced by the NCAA there would be no fans at the games. The Aggies had their first practice since winning the MW title on March 11. The NBA then suspended its season. Before USU could hold its scheduled practice on March 12, the dreaded announcement was made and head coach Craig Smith called off practice and held a team meeting in the Dee Glen Smith Spectrum.

“It was one of the craziest weeks of my life,” Merrill said. “When I heard there was going to be no fans, I didn’t even want to play. What’s the point? Coach (Smith) did a good job of pulling us together and we had a really good practice (on Wednesday).”

Smith called the first practice after the MW tournament “phenomenal.” It would be the only one.

Some Aggies had showed up for practice on Thursday and were getting up some shots. It was about 40 minutes before the official start when the news started to come out over social media.

“After the NBA suspended its season, we assumed the tournament was going to get canceled,” Merrill said. “We just had to wait for it, and then it happened.”

What was their first reaction when it became official that there would be no NCAA Tournament?

“It wasn’t shocking, because we were anticipating it was going to happen,” Merrill said. “It was tough. I almost would rather this happen than play with no fans, but I was devastated when it happened.”

“It felt like last week lasted a month,” Brito said. “It was the longest week I can remember. It seems like Sam’s shot was so long ago with all of the stuff that has happened. To be honest, I was not shocked about the decision. I didn’t know how to react. Yesterday (Monday) I started realizing what was going on because everything happened so fast I couldn’t process it. I actually got emotional. I was not ready for it to be over. Yesterday was a hard day for sure.”

Smith, Merrill and Brito all called the meeting in the Spectrum “emotional.”

“Coach was very emotional,” Merrill said. “He spoke to us and opened up the floor where a couple of coaches said some things. I don’t know if any player spoke. We were just too sad about it.”

With campus closed down and now most of the athletes having left for their homes, there will be no closure to the season. There was no team banquet, just a meeting that some players left after hearing the news.

“It was hard for the guys to deal with it,” Smith said. “Each dealt with it in their own way and some left before I could give them a hug. ... It’s sad because this team will never be all together again.”

USU went 26-8 during the 2019-20 campaign, finishing second during the regular season in the MW at 12-6. Wins over LSU, Florida, North Texas and No. 5 San Diego State are definitely highlights.

Each day has its challenges for the Aggie seniors, who found out Wednesday there were be no commencement at Utah State this year.

“It’s only been four or five days of this social distancing, but realizing there are at least a couple more months of this is tough,” Merrill said. “I wish we had the opportunity to play. There is not a whole lot we can do about it.”

Some national websites and national prognosticators have been playing out a mock tournament for 2020. Most have the Aggies winning a game and one even has USU reaching the Elite Eight.

“I’ve seen a couple of them,” Merrill said. “I guess we would have won some games. That’s good to know.”

Both seniors have been doing interviews and working out as they prepare for the next chapter in their lives.

“I had to clear my mind and didn’t do anything last weekend,” Merrill said. “I’ve started working out and moving forward. ... My classes were already online, so I will be spending a lot of time down in Salt Lake City working out and trying to get in the best shape that I can and trying to make the improvements I need to make.”

Merrill is the process of signing with an agent. With the NBA season on hold, workouts with teams are on hold and will be pushed back.

Brito said he has been mostly staying at his apartment, but does go out some to keep his “mental sanity.”

“This whole thing is troubling because Portugal may be going into total quarantine,” Brito said. “It may shut down in the next few days. In that case, I would prefer to stay at Utah State and work out. But if it comes to the same situation here, I might as well go home. It’s a dilemma right now.”

Merrill and Brito have also spent some time doing videos for USU. Merrill, who finishes second in career scoring and career assists, talked about the season coming to an end abruptly. Brito was in a video in the empty Spectrum doing the “Winning team, losing team” chant.

Both Aggies certainly left their mark at USU.