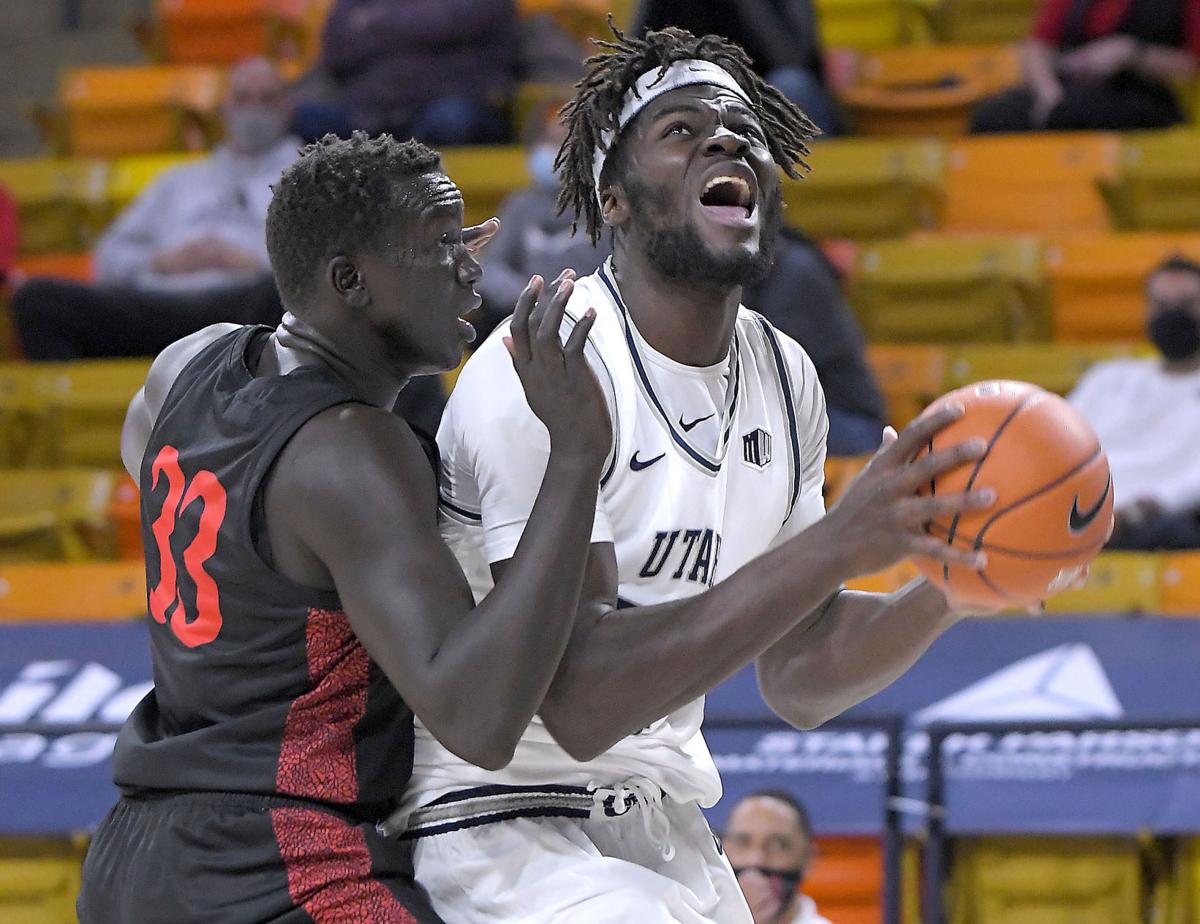 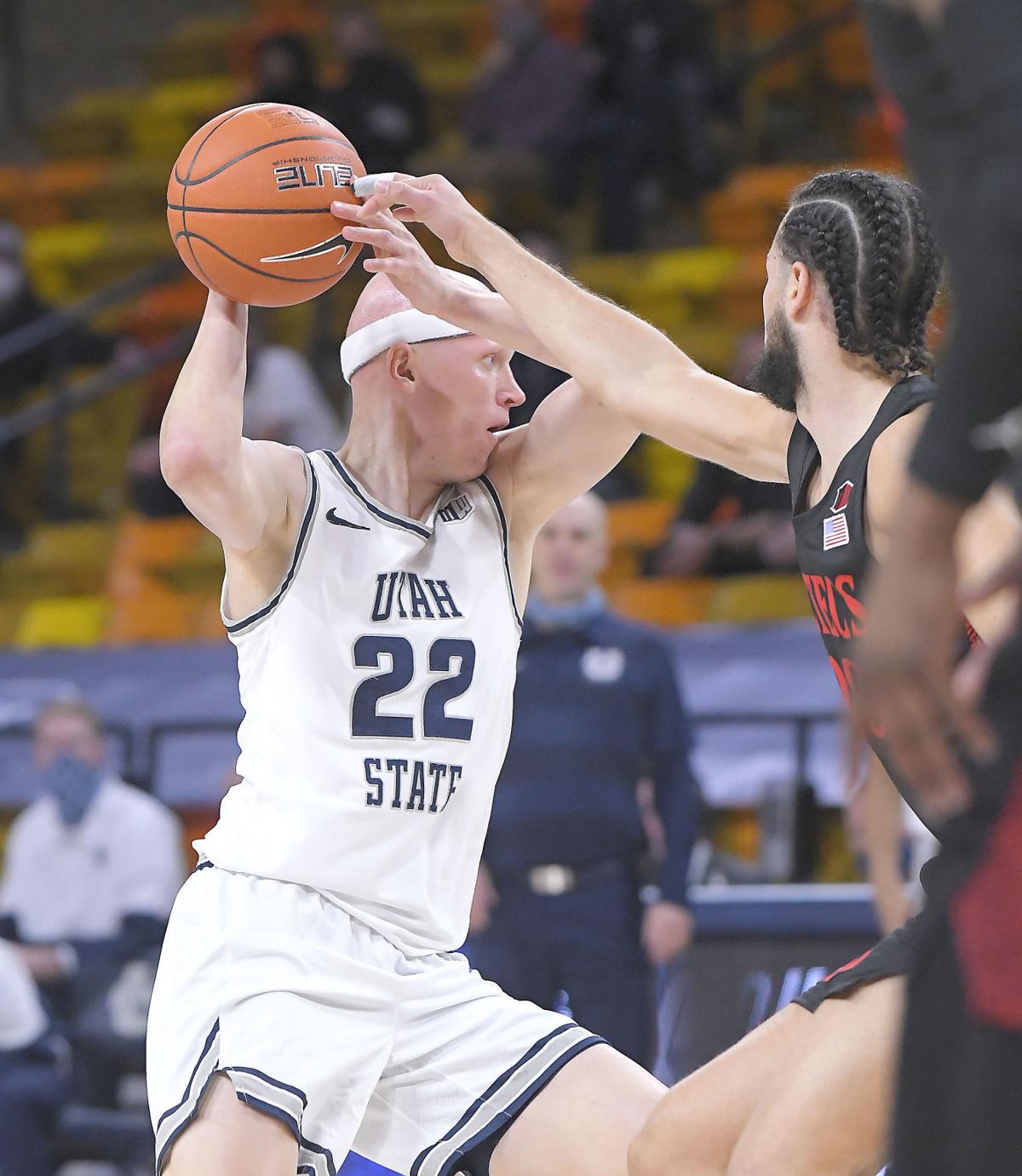 Baskets were hard to come by Thursday night at the Dee Glen Smith Spectrum.

Utah State made four shots in a row to take an 11-7 lead against San Diego State in the early going of their Mountain West Conference men’s basketball game. The Aggies did have one possession during that span where they turned the ball over.

Later in the first half, USU once again made four consecutive field goals — two of them 3-pointers — as the hosts used a 10-2 run to take a 33-20 lead at halftime. The Aggies never trailed after that initial streak and went on to beat the Aztecs, 57-45. It was the lowest offensive output on the season by both teams.

“They (Aztecs) are so good defensively,” Smith said. “We need to be more connected on offense. Fifteen assists is a pretty good number in a low possession game against a team like this, but way too many turnovers. I feel like we are a good defensive team and it was good to see that against a really good team. ... We were able to finish the deal against a high-level opponent.”

The Aggies (10-3, 7-0) won their ninth straight game while handing the Aztecs a rare loss. In fact, San Diego State had not lost on the road in 677 days — a stretch of 13 true road games.

“At the end of the day I think we were the toughest team,” said USU guard Brock Miller, who finished with a game-best 16 points. “It was a big win for us. ... I’m looking forward to coming back and playing them in 36 hours. We’ve got to come ready to play because San Diego State is a tough team and will come ready to go.”

The second of the two-game series between the Aggies and Aztecs will take place Saturday in a rare morning tip. The game is scheduled to begin at 11:30 a.m. and will be televised nationally on CBS.

“Every time we play each other it’s a physical game,” Smith said. “It’s big-boy basketball. We only shot two free throws and we are a team that gets to the line a lot. Every game has it’s own entity. When you have good defensive players, it’s difficult. ... I anticipate it being really tough on Saturday.”

Defense will once again be on display Saturday. Both teams have been defending at a high level this season, as well as crashing the boards.

San Diego State may be without all-league forward Matt Mitchell, who injured his right knee late in the game Thursday. He was slow to leave the court, but did walk off under his own power after the game with ice on the knee and was hugged by Aggie center Neemias Queta.

The USU big man had a monster game on Thursday as he finished with his fifth double-double of the season with 14 points and a game-best 16 rebounds. Queta also came up with three steals, blocked a shot and had an assist. He enters Saturday’s game as the team leader in scoring (12.4), rebounding (9.4), assists (3.0), blocks (2.7) and steals (1.4).

Miller and Queta were the lone Aggies to reach double figures in scoring, but obviously there were not a lot of points scored. USU guard Marco Anthony entered the game leading the team in scoring with 12.9 an outing, but had just two points on Thursday. Anthony did grab five rebounds and dish out two assists.

The Aztecs were led by Nathan Mensah with 13 points and nine rebounds. He made 6 of 9 shots, but also had five turnovers. Mitchell netted 10 points before leaving the game with 5:47 to play. Mitchell entered the game leading SDSU with 15.8 ppg. Jordan Schakel was averaging 13.3 ppg. and scored eight on Thursday on 3 of 10 shooting as Miller drew the assignment to mostly guard Schakel.

“He (Schakel) has been playing at a very high level,” Miller said. “He’s been shooting the ball really well from three and gives them a spark. So it’s important to try and maintain him the best that you can. He really is a good player and has been doing great things this year. I keep trying to improve defensively.”

The Aggies tied their season high with 18 turnovers.

“Too much sloppy play,” Smith said. “We need to do better with the turnovers.”

“It was a good, overall team win,” Miller said. “We shared the ball well. We just need to tighten up the turnovers and we can become even better.”

When players came off the bench for USU, there hasn’t been much of a drop off, especially on defense.

“Our communication on defense has been big,” Miller said. “We have been able to hold teams down the stretch. At the end of the day, our defense is what won us the game. I think we are all connected with Neemi (Queta) being the center for us and being our captain. ... We know we can rely on our defense to create offense.”

Utah State moved up 10 spots to No. 47 in the NET rankings after the win, while San Diego State fell seven places to No. 43. … New Aggie head football coach Blake Anderson was at the game Thursday and talked to the crowd at halftime. … The Aggies won the rebound battle, 36-34, for the 13th straight game this season and are 62-11 under Smith when that happens. … It was just the second win by double digits for the Aggies against the Aztecs with the last one coming during the 1962-63 season. … The Aztecs still lead the all-time series with the Aggies, 13-7. ... USU is 3-point favorites for Saturday’s game.

The USU women were held to a season-low in points in a 68-60 loss at San Diego State Thursday night.

Half of those points for the Aggies (4-5, 2-2) were scored by guard Shyla Latone. The 30 points were a career high as she went 11 of 22 from the field and made six 3-pointers. She also had a career-high five rebounds.

Bre Mathews came off the bench to score 10 points for the Aggies. Monique Pruitt grabbed a game-best 12 rebounds for the Aggies, while Jessica Chatman hauled in 10 boards and blocked three shots.

The Aggies and Aztecs will play their second game Saturday at 1 p.m.