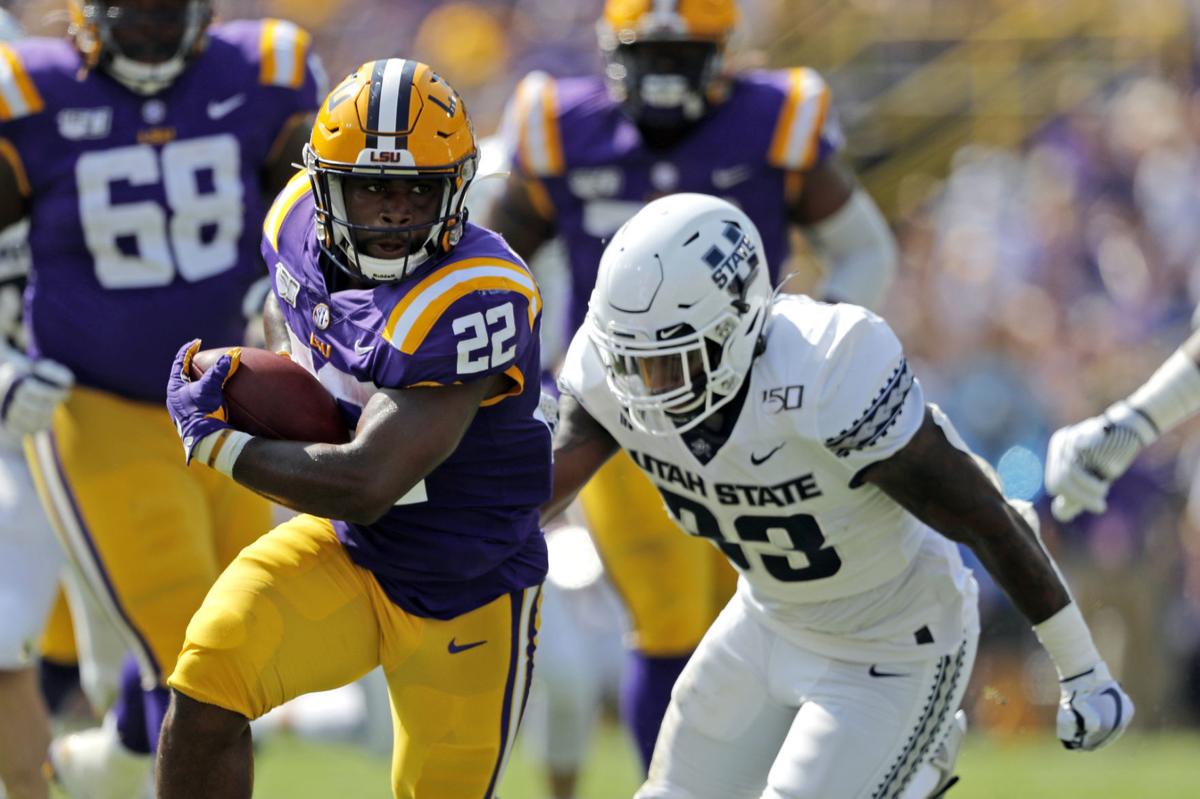 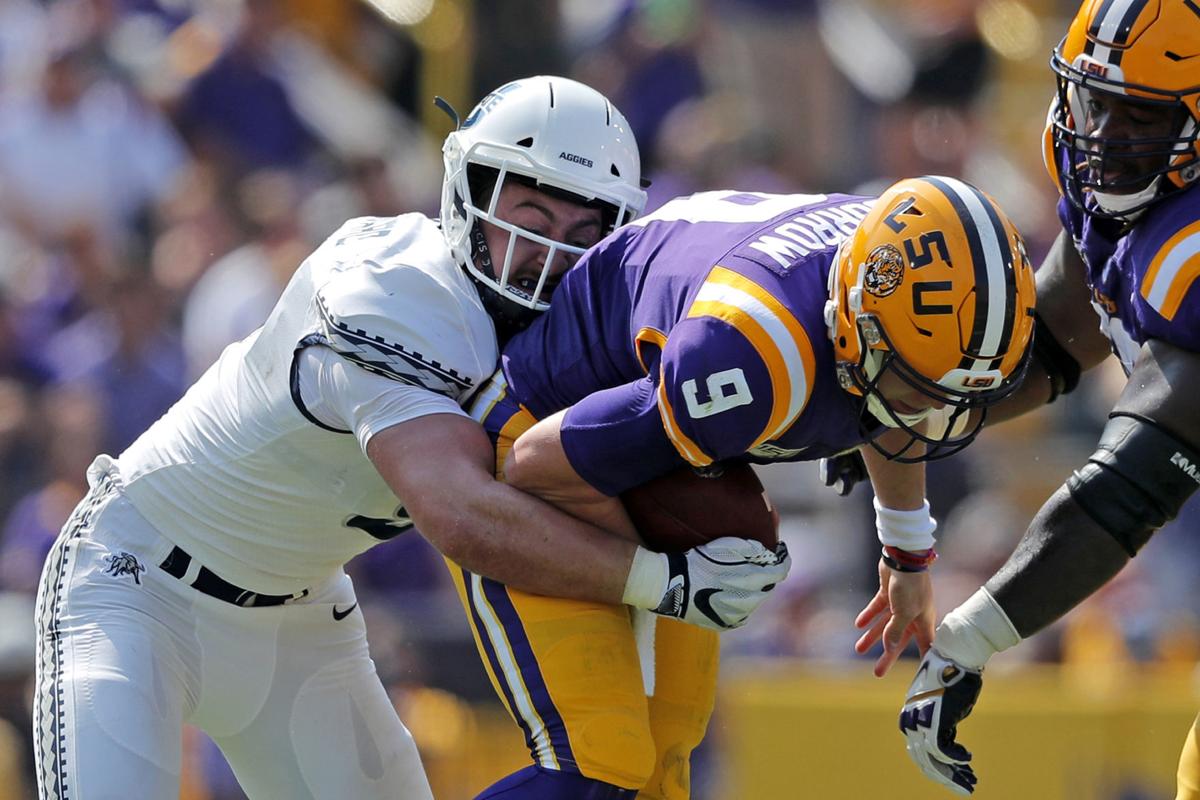 While it is much earlier than normal, the Aggies’ second bye week of the season arguably couldn’t have come at a better time.

Utah State’s football team was already pretty banged up, but suffered even more injuries to impact players in last Saturday’s rough 42-6 loss to No. 5 LSU in front of an announced crowd of 100,266 at Tiger Stadium.

The Aggies (3-2) made the daunting trek to Death Valley and was thoroughly outplayed on both sides of the ball. For starters, USU only managed 159 yards of total offense, including a paltry 53 yards and two first downs in the second half.

“We got stomped on offense. There you have it,” USU head coach Gary Andersen said. “Couldn’t run the ball. Couldn’t throw the ball. You name it, we couldn’t do it.”

USU struggled mightily on third downs offensively and defensively, and that was the biggest reason the Tigers enjoyed a whopping 41:03 to 18:57 edge in time of possession. The Tigers converted on 11 of 17 third downs, including a few third-and-long situations, while the Aggies were only successful on 1 of 12 third downs.

Simply put, USU failed to sustain any drives, and the Aggie defense ultimately wilted in the heat (mid-80s) and humidity (63 percent) against one of the best and most explosive offensive units in college football. A balanced LSU attack racked up 601 total yards. The Tigers (5-0) entered the contest ranked first nationally in scoring offense (57.8 points per game), second in passing offense (431.8 yards per game) and third in total offense (563.5 ypg).

“It’s a lot to learn from,” USU linebacker Kevin Meitzenheimer said in a radio interview with 1280 The Zone. “That is a great football team (we played), so we have to build off it and get ourselves better.”

Fortunately for the Aggies, they have a couple of weeks to regroup and lick their collective wounds. USU won’t play again until it hosts Mountain West foe Nevada on Saturday, Oct. 19. The game will be televised on ESPNU and is slated to begin at 8:15 p.m. The Wolf Pack just had their first bye week of the season and they will host San Jose State this Saturday.

The injury bug bit the Aggies in the early going against LSU as right tackle Kyler Hack went down during their first possession and didn’t return. Hack, who appeared to sustain a leg or ankle injury, was replaced by third-stringer Jacob South. Original starter Andy Koch suffered a season-ending knee injury against San Diego State.

Logan High product Caden Andersen, who is one of USU’s primary back-ups at defensive tackle, was helped off the field later in the game and was unable to put any weight on his right leg.

USU’s defense has already been short-handed for a while as starting defensive tackle Fua Leilua sustained a season-ending injury against Wake Forest, and valuable rotation cornerbacks Terin Adams (hand) and Zahodri Jackson (undisclosed injury) haven’t played since that season-opening game.

Offensively, the Aggies dealt with a significant blow against a hungry LSU defense when Utah graduate transfers Siaosi Mariner and Caleb Repp, two of Jordan Love’s top targets in the passing game, were banged up and exited the game for good in the first half.

Mariner landed pretty hard on his shoulder while making a sensational 35-diving catch at the LSU 29-yard line late in the opening quarter. A couple of plays later, Repp dropped a pinpoint pass from Love that surely would have been a touchdown and given USU a 10-7 lead. It was Repp’s first dropped pass of the season.

Late in the second quarter, Repp was tackled hard on a reception that resulted in negative yardage, and he didn’t return. The Tigers blew up essentially every short passing route the Aggies attempted.

With the exception of Jordan Nathan, USU’s wide receivers had a difficult time getting separation against LSU’s talented secondary. The Tigers also put Love under a fair amount of duress, and he struggled as he only completed exactly half of his 30 passes for 130 yards and a trio of interceptions. One of the picks nullified a promising scoring opportunity, one was a poor decision and the other one probably should have been overturned as safety Grant Delpit didn’t appear to have complete control when he came down with a 50-50 ball.

USU’s passing attack was severely hampered by the team’s inability to run the football. The Tigers recorded 10 tackles for loss and limited the Aggies to 19 yards on 22 rushing attempts. USU clearly missed its leading rusher on the season, Jaylen Warren, who did warm up but it still recovering from an injury.

“I think when you can’t establish the run against us there’s no way you can beat us,” LSU linebacker Jacob Phillips said.

The Tigers completed stymied an Aggie offense that didn’t score a touchdown for the first time since a 6-3 loss at BYU in 2012 — a span of 91 games. Additionally, the Aggies’ 159 total yards were their fewest since the ghastly 116 they gained in a 58-10 setback at home to Utah in 2008. This was the first time in 22 games USU didn’t score at least 20 points, putting an end to the third-longest streak at the FBS level.

“If our defense plays like that,” LSU head coach Ed Orgeron said, “we can do anything we want.”

The Aggies scored their lone points on first-quarter field goals of 30 and 47 yards by Dominik Eberle, who is now 9 for 10 on the season, including 3 of 4 from 40-plus yards out. USU’s red zone woes continue as it has only found paydirt on 6 of 19 trips inside the opposition’s 20-yard line during the 2019 campaign.

USU’s first field goal was gift-wrapped by cornerback Cameron Haney, who snared a deflected pass by LSU standout quarterback Joe Burrow and returned it 20 yards to the Tiger 7-yard line. It was the first INT of the senior’s collegiate career.

It was a commendable effort for an Aggie defense that performed reasonably well, except for on third downs. Meitzenheimer shined as he contributed with a career-high 14 tackles, including 12 solo stops, and two forced fumbles. The second fumble was recovered by teammate Troy Lefeged Jr., who also chipped in with nine tackles.

Defensive end Nick Heninger made a big difference after being limited by an injury the week before against Colorado State. Heninger led the Aggies with 1.5 tackles for loss, broke up his first career pass and added a game-best two QB hurries.

Defensive back Andre Grayson (six) and true freshman linebacker AJ Vongphachanh (five) finished with career-best tallies in tackles for USU, which fell to 1-18 all-time against teams from the Southeastern Conference (SEC).

Both USU loses this season are to 5-0 teams ranked in the latest AP Top 25. Wake Forest is currently 19th in that poll.

San Jose State signal caller Josh Love was selected as the Mountain West Offensive Player of the Week after throwing for a season-high 405 yards in his team’s 32-21 road victory over New Mexico. The senior completed passes to nine different targets and tossed a pair of TDs.

San Diego State cornerback Luq Barcoo was named the league’s Defensive POTW after finishing with six tackles, three interceptions — on back-to-back-to-back passes by the opposing QB — and a pass breakup in the Aztecs’ 24-10 road triumph over Colorado State. The senior is the first FBS player to pick off three consecutive passes since at least 2012.

SJSU kicker Matt Mercurio was tabbed the MW Special Teams POTW after connecting on field goals of 24, 33, 49 and 24 yards against the Lobos. The freshman scored 14 points — the most by a Spartan at any position since Sept. 30, 2017 — and his 49-yard FG was the longest of his collegiate career.

BOND UP FOR AWARD

USU safety Shaq Bond was selected as a nominee for the Maya Clinic Comeback Player of the Year. This is an annual award that recognizes athletes from all divisions of college football who have bounced back from an injury, illness or other challenges.

Three players are nominated for this award on 10 different occasions throughout the season.

Bond missed the final five contests of the 2018 campaign after blowing out his knee against New Mexico. The junior has started all five games this season and has been one of the Aggies’ top performers. No. 4 has recorded 29 tackles, 1.5 TFLs, three PBUs and one INT, which he brought back to the house against SDSU.