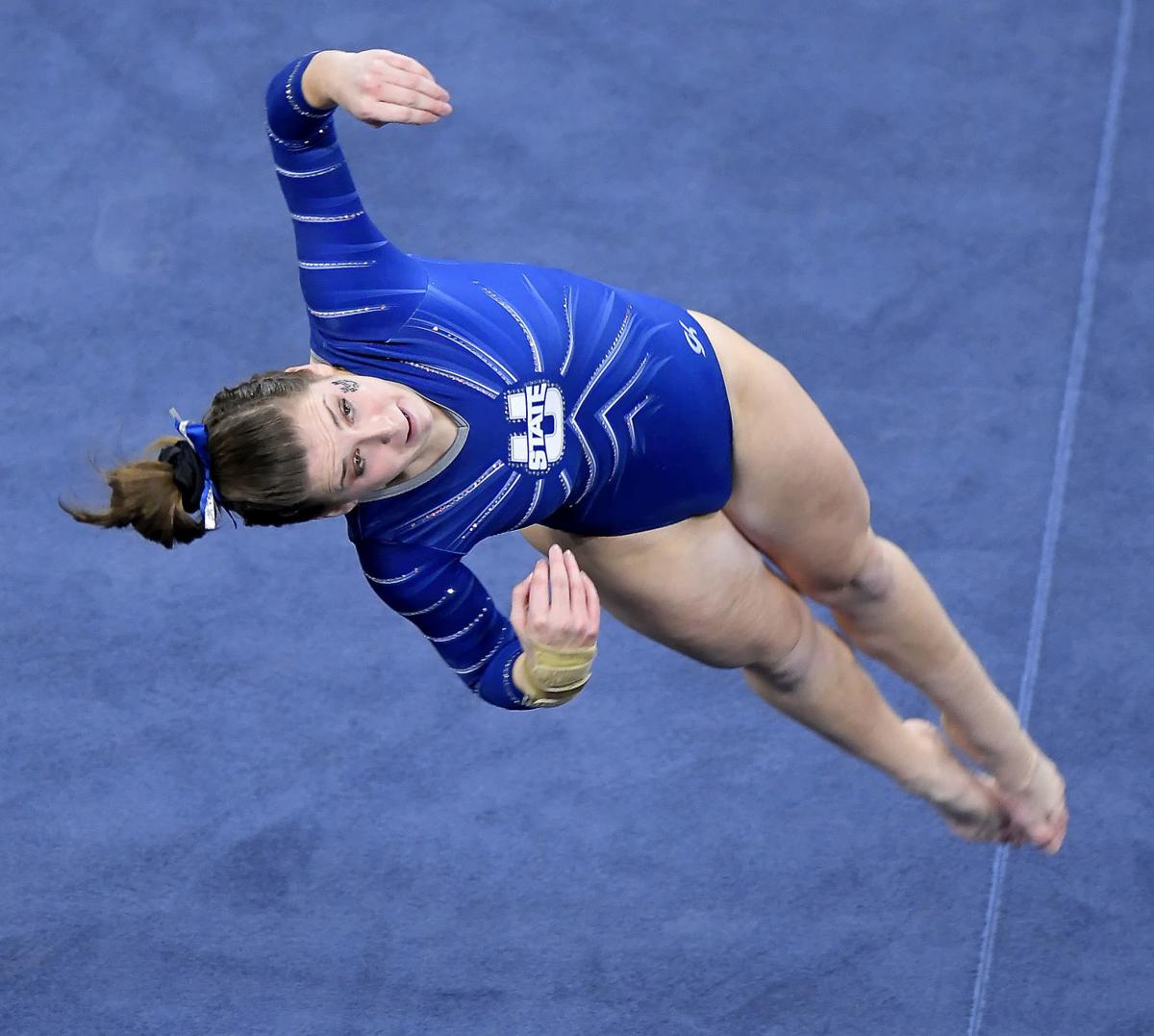 Utah State’s Autumn DeHarde competes in the floor exercise against Boise State on Friday in Logan. DeHarde scored a 9.925 on the event. 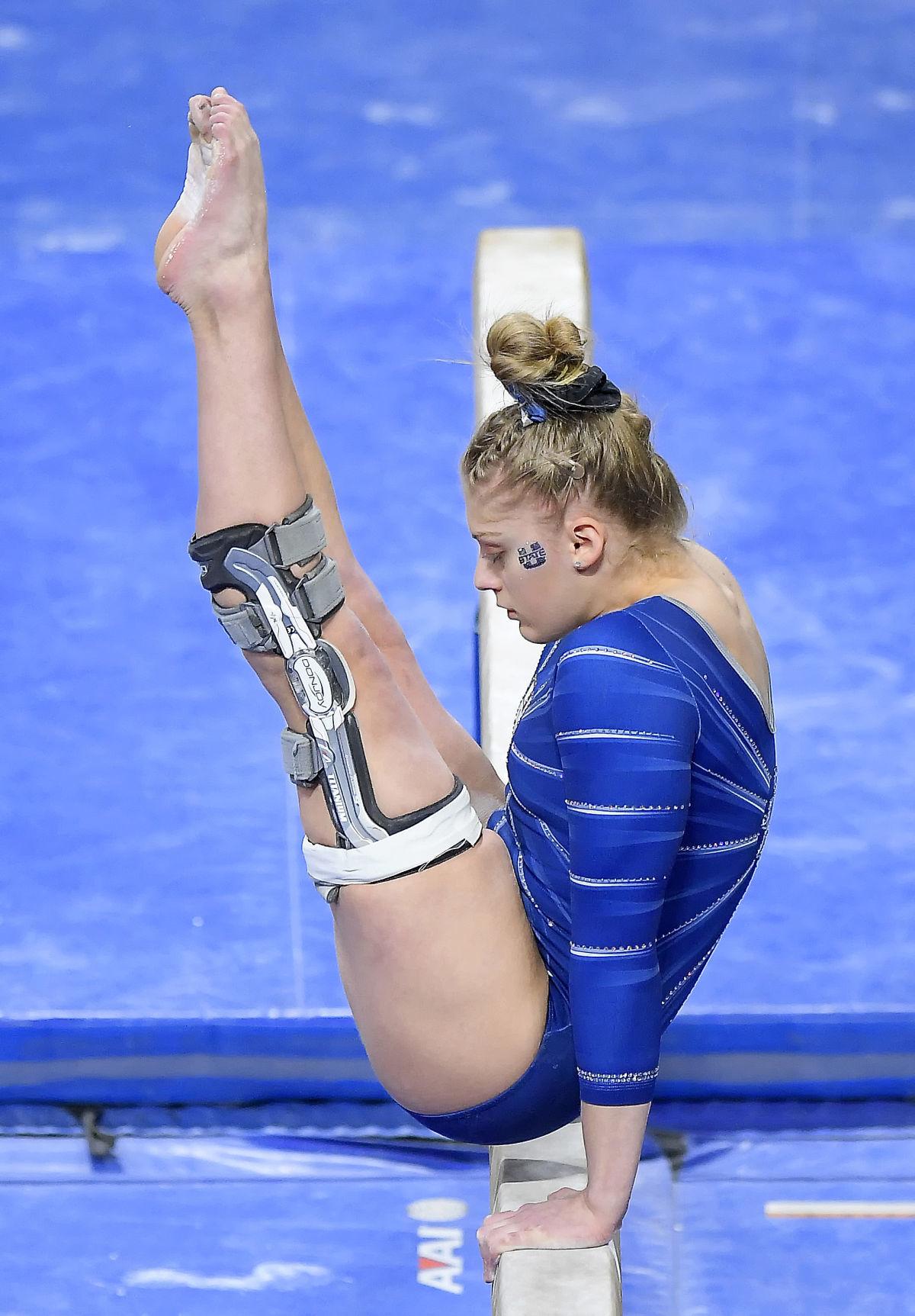 Utah State’s Taylor Dittmar competes in the beam against Boise State on Friday in Logan.

Utah State’s Autumn DeHarde competes in the floor exercise against Boise State on Friday in Logan. DeHarde scored a 9.925 on the event.

Utah State’s Taylor Dittmar competes in the beam against Boise State on Friday in Logan.

It had been more than eight years since the Aggies had beat the Broncos in gymnastics.

The key word is “had.” That streak is now over.

Utah State started strong, maintained through the middle rotations and finished with gusto Friday night at the Dee Glen Smith Spectrum in its home opener. The end result was a victory against Mountain Rim Gymnastics Conference (MRGC) foe Boise State, 195.675-193.85, in front of 1,613 fans.

“We weathered being on the road and were excited to be back in the Spectrum tonight,” USU head coach Amy Smith said. “It was a great crowd. It was awesome. We had three solid events and closed out the meet incredibly strong on floor. That was fun to see that.”

“This is huge,” Aggie junior Autumn DeHarde said. “They said we haven’t beat them in 22 meets. It’s really exciting for us.”

It came right down to the last competitors Friday night. The Aggies, who were on the floor exercise, came through with flying colors. While DeHarde, Leighton Varnadore and Mikaela Meyer were coming up big for USU as the final three performers, the Broncos struggled on the balance beam at the end.

In fact, it became anti-climatic as the final two Broncos had problems on beam. A tight meet became all USU.

“We don’t really look at the scores, but we knew what we had to do (on floor), and we got it done,” said DeHarde, who finished her floor routine to chants of 10. “It’s just fun to compete.”

DeHarde didn’t get the perfect score, but did tie her career-best mark with a 9.925.

“It felt really good,” DeHarde said of her routine. “I just got out there and had fun. That’s what I love to do. Floor is my favorite to compete on. I just love going out there and showing it off. I never feel any pressure on floor. I go out there and do what I practice.”

Varnadore followed DeHarde with a career-high 9.90, which helped the junior wrap-up the all-around title with a season-best 39.20. Varnadore just edged teammate Sofi Sullivan in the all-around as the freshman turned in a 39.175.

“Autumn (DeHarde) came through tonight on beam, floor and vault,” Smith said. “She had a solid night. That’s Autumn. Leighton (Varnadore) told me, ‘Amy, I’m getting it done tonight. She did a phenomenal job.”

“We were just focusing on ourselves, focusing on the job we had to do,” Smith said. “They did a great job doing that. I can’t be happier right now. ... It was great to get a 49 tonight (on floor). We are moving in the right direction.”

While it was the home opener, USU has been competing for a month. This was the fifth meet and the 195.675 was a season best.

“It has been tough to be on the road, but we haven’t been flying, so that has been easier,” DeHarde said. “But it felt really good to be home.”

The Aggies got off to a solid start on the vault. Varnadore led the team with a career-high matching 9.85.

“Vault, last week, was not our best event,” said DeHarde, who had a 9.70 on vault. “So to come out and improve on that was great.”

Meanwhile, the Broncos only competed five on the uneven bars and had to count a fall. After one rotation, the hosts held a 48.825 to 48.275 lead.

USU stayed in front at the midway point 97.60 to 97.125, but the Broncos gained a little ground with a season-high team score on vault of 48.85 as Bronco Gabriela Bouza won the event with a 9.875. The Aggies scored a 48.775 on bars as Brittany Jeppesen tied several BSU gymnasts for the top score with a season-best 9.85.

Moving to the balance beam, the Aggies suffered a fall, but DeHarde and Sullivan finished off the apparatus with scores of 9.85 and 9.825, respectively. DeHarde was next up after the fall.

“That’s all right, because we have her back,” DeHarde said.

USU didn’t flinch on floor, and ended the losing streak to BSU.

“We just need to keep pushing,” Smith said. “We need to hit that 49 mark on vault and bars. That will put us in that 196 range which is where we want to be. I feel the team is building and getting better each week. We put a complete meet together tonight.”