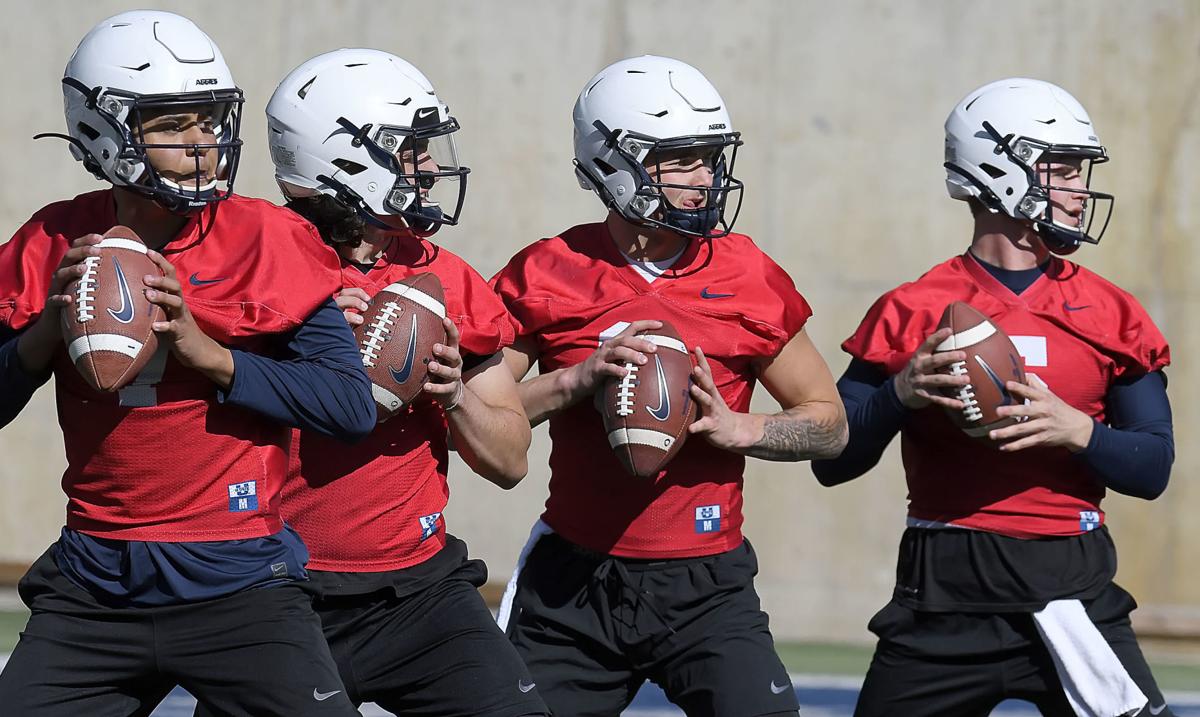 USU quarterbacks runs through drills during the first day of spring practice on Tuesday in Logan. 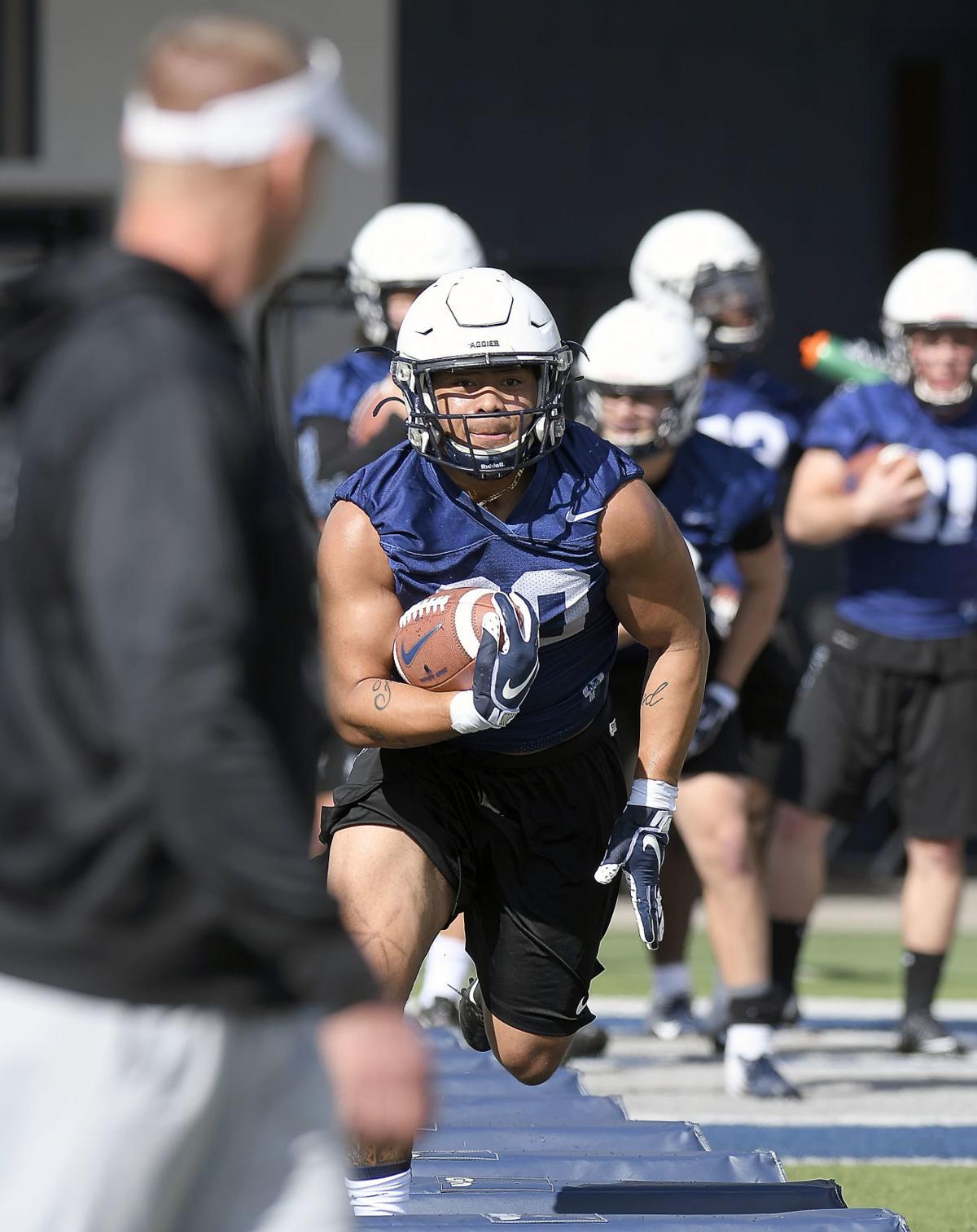 Gary Andersen watches as Jaylen Warren runs through drills during the first day of spring practice on Tuesday in Logan.

USU quarterbacks runs through drills during the first day of spring practice on Tuesday in Logan.

Gary Andersen watches as Jaylen Warren runs through drills during the first day of spring practice on Tuesday in Logan.

The 2020 college football campaign is more than five months from starting, but it sure felt like football season when the Aggies came out for their first practice of spring camp on Tuesday afternoon at Maverik Stadium.

With temperatures in the low 50s and plenty of sunshine, it was definitely a different feel than when Utah State used to open spring camp in late February during the Matt Wells era. Quarterback Henry Colombi was certainly happy to practice in ideal conditions.

“Coming from Florida, I would say the first couple of years here playing in the cold it was awful,” Colombi said. “It’s something you have to get used to. You know, the ball’s like a rock, it’s freezing outside and you’ve got to wear layers. So, it felt great to come out here on a T-shirt and just be able to sling it around with no issues.”

Colombi looked sharp slinging the pigskin around Tuesday. For the first time during his time in Logan, the redshirt junior is the most experienced signal caller heading into a spring or fall camp. USU head coach Gary Andersen liked what he see from Colombi on Day 1.

“His experience showed today,” Andersen said. “That was fairly obvious. He was by far the best quarterback out there today, and I guess one would expect that, but I don’t think the other quarterbacks quite expected that.”

Colombi was rock solid in a third-down drill toward the end of practice as the Aggie offense converted on 50 percent of them with No. 3 at the helm. However, the other quarterbacks struggled a bit in those third-down situations, “so the offense lost the day,” Andersen asserted.

That was music to the ears of USU senior hybrid safety/linebacker Troy Lefeged Jr., who is one of only five returning starters on the defensive side of the ball. The Aggies lost four defensive starters who garnered all-Mountain West honors at least once in their collegiate careers in David Woodward, Tipa Galeai, Christopher ‘Unga and DJ Williams.

“We feel good because we beat the offense today,” Lefeged Jr. said with a laugh. “But today was more mental. We’re just trying to get down the new calls, our new defense because we’ve changed a lot of things.”

Indeed, the Aggies will have a different look defensively in ’20 after using a 4-2-5 base defense in 2019. USU will go with a lot more three down linemen sets this coming season.

“You take the defense and offense every single year, and you adapt to it what you have personnel wise, from your oldest and best players, to your youngest players,” Andersen said. “And that’s exactly what I think that (co-defensive coordinators) Frank (Maile) and Stacy (Collins) have done with the defensive side, and the rest of the defensive coaches, they’ve bonded well together. I think they’ve put together a very good scheme.”

With the new defensive scheme, several lettermen from a year ago will be playing different positions for the Aggies in ’20. Nick Heninger, arguably USU’s best pass rusher last season, has moved from defensive end to linebacker, as has Jaylin Bannerman. Veteran linebacker Maika Magalei is now a safety, while safety Cash Gilliam is now listed as a linebacker.

Lefeged Jr., who started all 13 games at safety last year for the Aggies, will be manning a hybrid role as a senior, which will allow him to play closer to the box.

“Now I’m just strictly nickel and I’m not going to be playing safety as much, so it’s a little adjustment for me,” he said. “But I like it. I think I can play anywhere in the secondary.”

“If he has aspirations, which he does, to continue to play football after this next season, that’s where he needs to be,” Andersen said of Lefeged Jr. “He’s a physical, tough-minded kid and extremely smart.”

USU’s offense will also have a bit of a different look this upcoming season. The Aggies actually huddled a few times while scrimmaging toward the end of Tuesday’s practice. USU played at a frenetic pace the previous three years.

“I won’t say it’s a major change,” Colombi said. “We’re still, as you can see, it the (shot)gun, we’re running uptempo, a spread offense. I mean, we will switch it up a little bit. We’ll do some huddle here and there, so if anything I’d say it’s just a little bit more complex, but it’s nothing that me or anyone else can’t handle.”

Although the Aggie have to replace record-setting quarterback Jordan Love, they do welcome back eight returning offensive starters. USU did lose three of its best skill position players in running back Gerold Bright, wide receiver Siaosi Mariner and tight end Caleb Repp — the latter two of whom excelled in their lone season at USU as Utah graduate transfers.

The Aggies still have several veterans at the skill positions, led by wideout Jordan Nathan, who is the team’s leader with 30 career starts.

“I’m excited to see which receivers are going to step up and make those plays when we need them in spring ball, and watch that continue to grow through the summer and into the fall,” Andersen said.

A couple of Aggies who missed most of last season with injuries but looked pretty sharp Tuesday were QB Andrew Peasley and cornerback Zahodri Jackson. Peasley moved well Tuesday, despite only being seven months removed from suffering a season-ending knee injury.

“Andrew, obviously, he was able to come back and he’s 100 percent back at it right now, and he needs these practices,” Andersen said. “... It’s been a long time since he’s played football, so I expect him from practice one, to two, to three, to four, you’re going to see the confidence just jump out and be very noticeable as he continues.”

Jackson made a couple of nice defensive plays during 11-on-11 action. Fellow cornerback Terin Adams made a nice diving interception on a tipped pass late in Tuesday’s practice.

A few underclassmen who played a year ago were not listed on USU’s spring roster in running back Enoch Nawahine, defensive lineman Hale Motu’apuaka and offensive linemen Mohelika Uasike. Nawahine is currently serving a mission for the Church of Jesus Christ of Latter-day Saints.