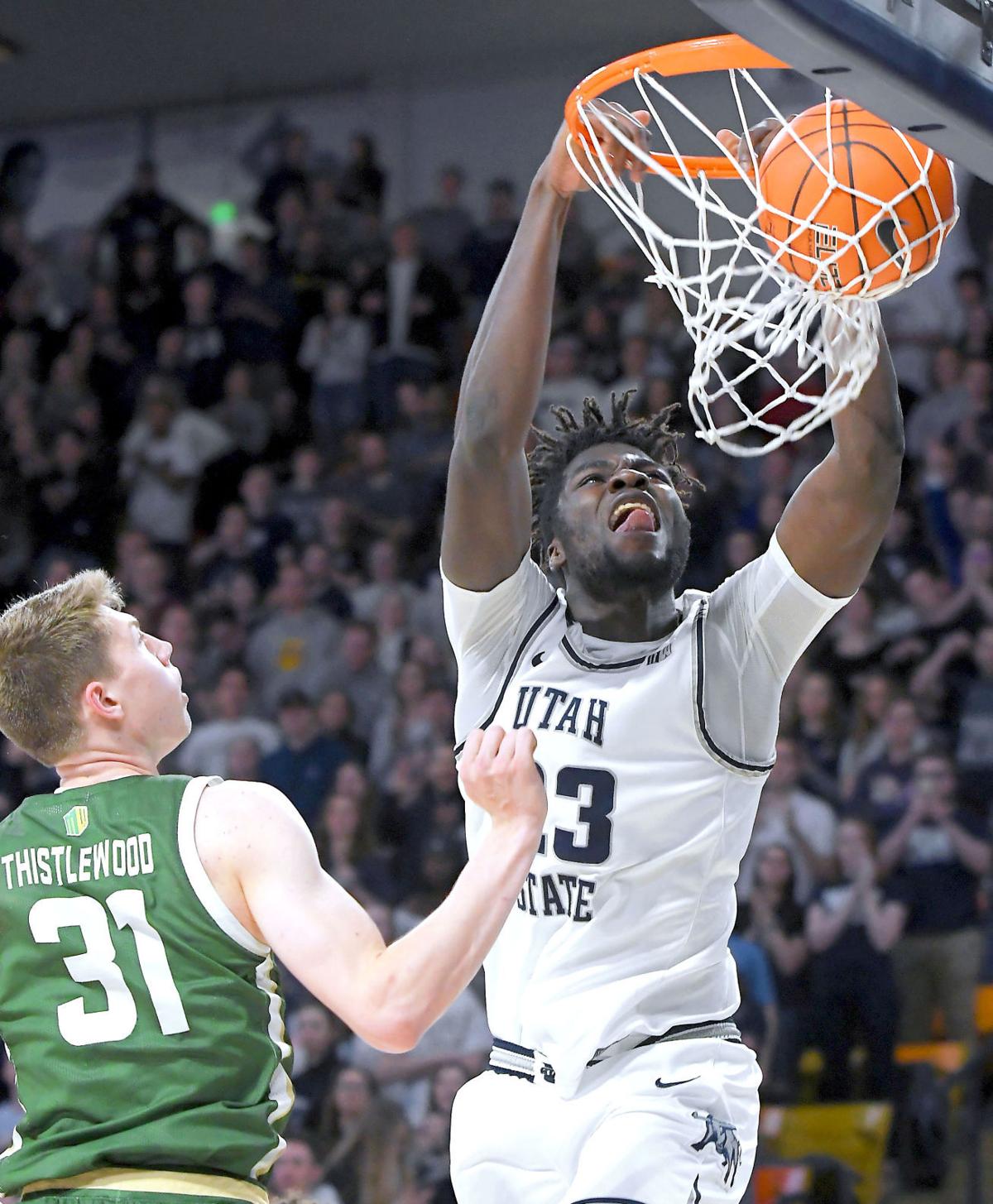 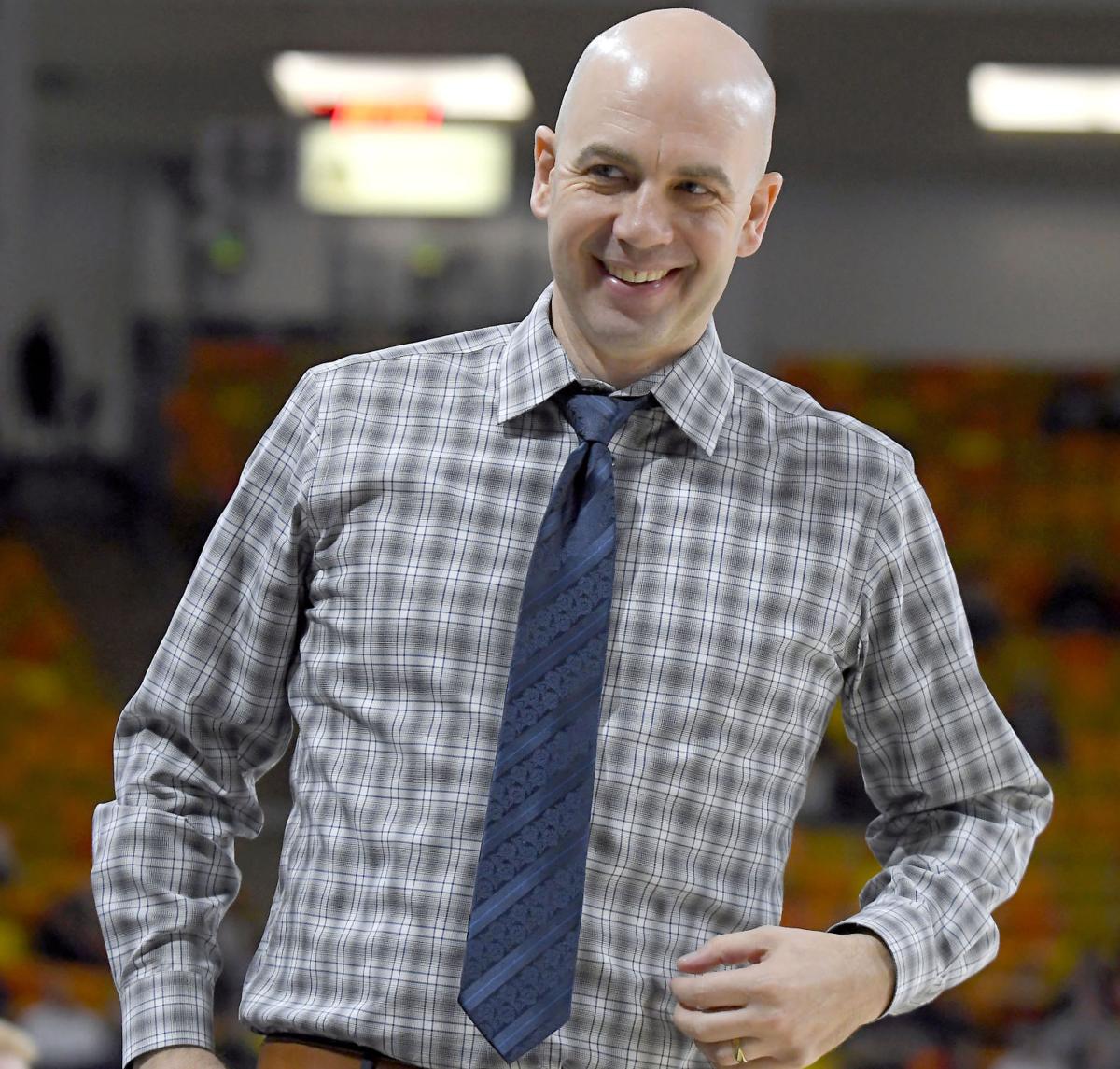 Aggie center Neemias Queta is off to strong start through the first three games of the 2020-21 season.

The junior from Portugal leads the Utah State men’s basketball team in scoring (14.7 points a game), rebounding (9.3), blocked shots (2.7) and field goal percentage (53.8 percent). Queta is just one assist behind the team leader as he is averaging 2.0 dimes a contest.

The 7-footer also leads the team in national watch lists. Queta was one of 50 players in the country to be named to the initial watch list for the John Wooden Award on Tuesday. The award, presented by Wendy’s, recognizes the most outstanding player in collegiate basketball, as well as recognizing others on the Wooden Award All-American team.

Back in early November Queta was named to the Kareem Abdul-Jabbar Watch List for the second consecutive year. The annual honor recognizes the top centers in men’s college basketball and the initial watch list included 20 student-athletes from across the nation.

The Aggies (1-2) will be back in action Saturday. They host in-state rival BYU (4-1) in their season opener. Tipoff in the Dee Glen Smith Spectrum is scheduled for 7 p.m.

Queta is the only player from the Mountain West Conference on the list for the John Wooden Award and one of just nine from the western U.S. He joins Stanford’s Oscar da Silva and Ziaire Willams, Colorado’s McKinley Wright IV, Pepperdine’s Colbey Ross, USC’s Evan Mobley, Arizona State’s Remy Martin, UCLA’s Chris Smith and Gonzaga’s Drew Timme and Corey Kispert.

The players on the list are considered strong candidates for the 2021 John R. Wooden Award Men’s Player of the Year. Players not chosen to the preseason list are still eligible for the Wooden Award midseason list, late season list and the National Ballot.

The National Ballot consists of 15 top players who have proven to their universities that they meet or exceed the qualifications of the Wooden Award.

Nearly 1,000 voters will rank in order 10 of those 15 players when voting opens prior to the NCAA Tournament and will allow voters to take into consideration performance during early round games. The Wooden Award All American Team will be announced the week of the Elite Eight at the NCAA Tournament. The winner will be presented following the NCAA Tournament in April.

Queta opened the 2020-21 season with a pair of double-doubles and led the Aggies in scoring in two games at the Bad Boy Mowers Crossover Classic last week. In the season opener against VCU, Queta paced USU with 17 points and 10 rebounds. He followed that up 12 points and eight rebounds against South Dakota State. Queta finished the tournament with a 15-point, 10-rebound performance in USU’s 82-71 victory over Northern Iowa.

Last year, Queta finished second on the team in scoring (13.0) and rebounding (7.8), despite missing the first nine games and 12 games overall. Queta anchored the Aggie defense, totaling a team-best 38 blocks and averaging a league-best 1.7 rejections during conference play. Queta earned second-team all-Mountain West honors and was also named to the Mountain West All-Tournament Team as the Aggies captured their second-straight MW Tournament championship and punched their ticket to the NCAA Tournament in back-to-back years.

Queta burst onto the scene as a freshman, garnering MW Freshman and Defensive Player of the Year honors after recording a single-season school record of 84 blocks, averaging 2.4 per contest. Queta finished second on the team with 11.8 points per game and led the team on the glass, pulling down 8.9 rebounds per game. At the end of the year, Queta was named second-team all-Mountain West and was also a member of the Mountain West All-Tournament Team.

It was announced Wednesday evening that USU head men’s basketball coach Craig Smith has tested positive for COVID-19 and will be unavailable to coach the Aggies’ 2020-21 home opener against BYU on Saturday. The diagnosis came after a recent team test. Smith is currently asymptomatic.

“It will be difficult watching from a distance, but I know our team is in great hands with our coaching staff,” Smith said in a press release. “Our program has always been led by our student-athletes. This doesn’t change a thing. I’m looking forward to returning to the sidelines when our protocols deem it safe for everyone involved. I am pumped for our home opener on Saturday night.”

The home opener against BYU on Saturday will have “limited fans to keep spectators, staff and players safe and healthy during the current COVID-19 pandemic,” states a press release from USU on Wednesday.

Tickets, if available, will then go on sale to the general public on Friday at 10 a.m.

Fans should be aware that there will be no concessions at the game and face coverings will be required inside the Spectrum. Outside of utilizing the restroom, fans will be required to stay within their pod of seats at all times.