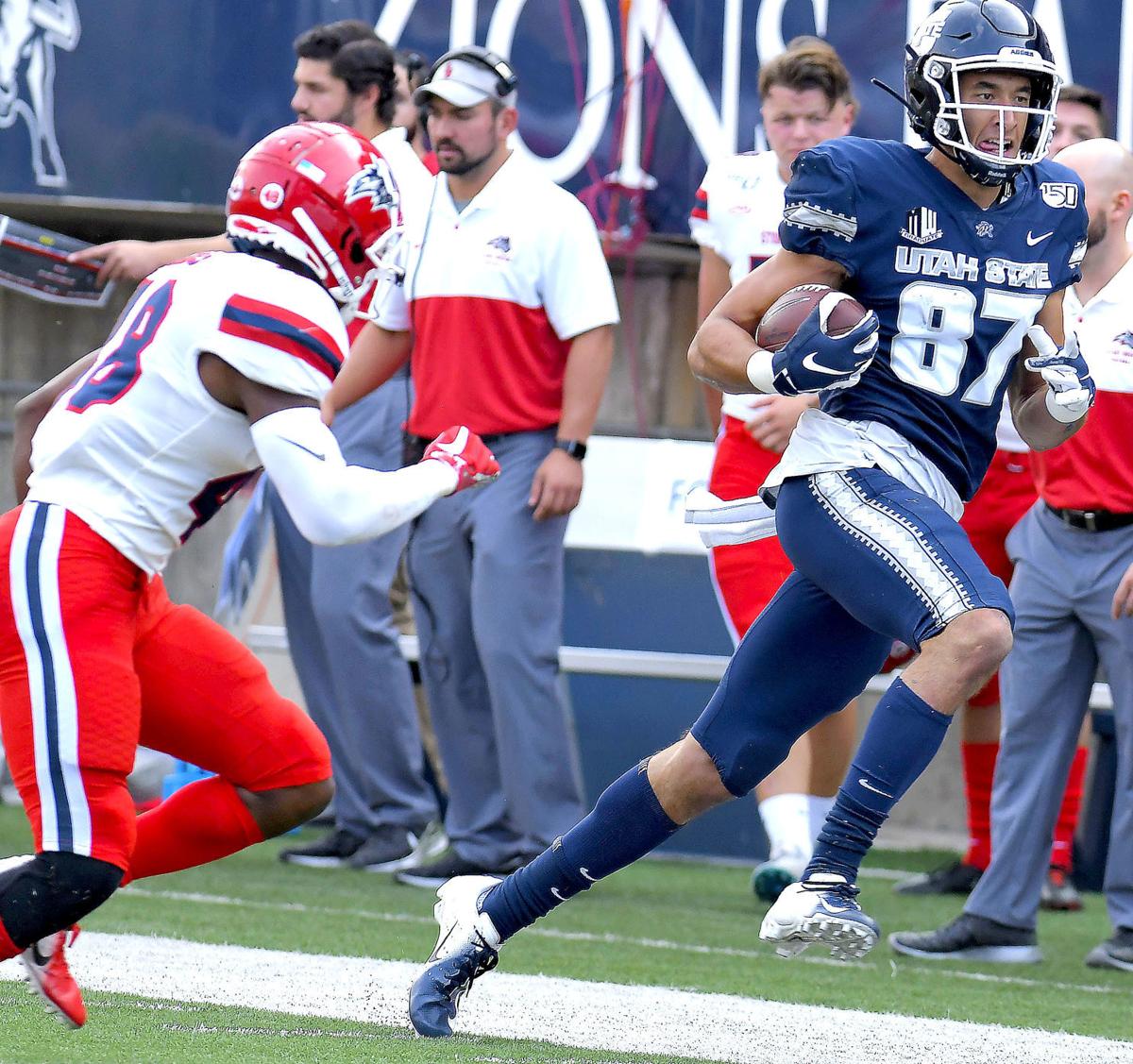 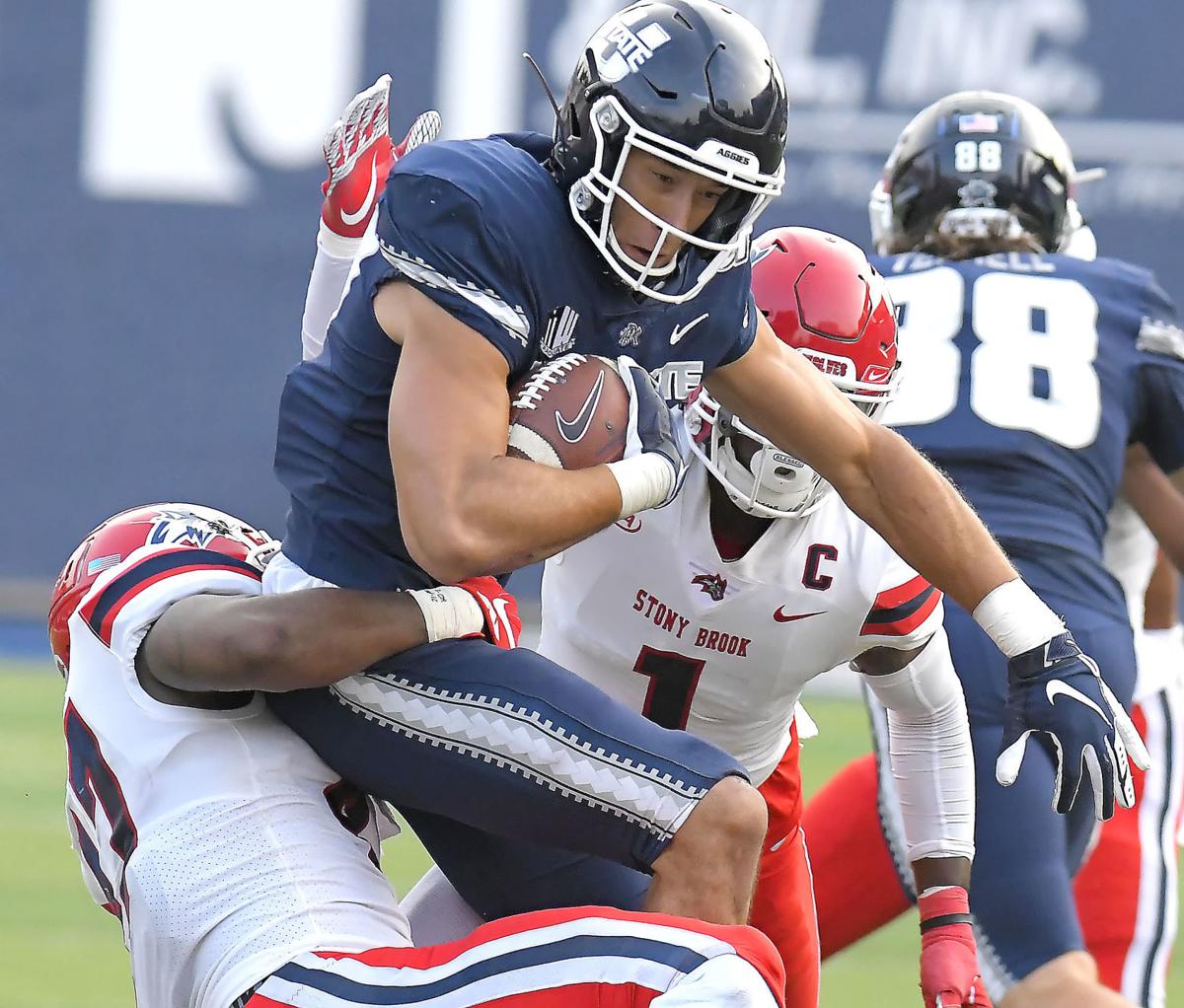 Repp has excelled as a TE for Aggies

In his first-ever practice at Utah State, tight end Caleb Repp made an immediate impression by hauling in a few receptions in pretty heavy traffic.

Indeed, it was a sign of things to come for the University of Utah graduate transfer. In less than two months, Repp has worked his way to the top of the depth chart and is already one of star quarterback Jordan Love’s primary targets.

After two games, Repp ranks second on USU’s football team in receptions (10) and third in receiving yards (117). Love hooked up with No. 87 five times for 58 yards against Wake Forest, and it was Repp who earned the targeting penalty on Wake Forest stud safety Nasir Greer that gave the Aggies new life late in the fourth quarter. A week later, Repp snared five catches for 59 yards in USU’s home opener against Stony Brook.

“You know what, it’s been really good, man,” said USU assistant head coach/tight ends coach Frank Maile when asked how gratifying it’s been to watch Repp shine. “That’s why we brought him in and he’s been a huge impact player for us, being able to stretch the field because of his length and athleticism and great ball skills.”

The 6-foot-5, 225-pounder is a bit undersized for a tight end at the FBS level, “but he’s tough as nails, so that makes the difference,” Maile declared. Repp developed a great deal of toughness during his two seasons as a reserve defensive end at Utah.

The son of Sharon and Gary Repp spent four years in Salt Lake City, where he played in 37 games and started six — all as a true freshman in 2015. The native of Rancho Cucamonga, California, redshirted in 2016.

Repp started off his collegiate career as a tight end/wide receiver and made an immediate impact in his first-ever appearance, a 62-20 shellacking of then-No. 13 Oregon on Sept. 26, 2015. Repp hauled in touchdown receptions of 9 and 16 yards against the Ducks on the road.

Those were the only two catches Repp made as a Ute, though, as he was moved to the defensive trenches for the remainder of his time in Salt Lake City. The former Los Osos High School stalwart recorded 21 tackles, including 2.0 sacks, and forced two fumbles — one on a punt return against UCLA, and the other against San Jose State — during his two seasons on the defensive side of the ball.

It wasn’t the conclusion to his time at Utah he was envisioning, but Repp doesn’t regret how things turned out.

Repp is one of three former Utes who made their way to Cache Valley this summer. Ironically enough, fellow Utah graduate transfer Siaosi Mariner, a wide receiver, is currently USU’s leader in receptions (13) and receiving yards (191), and is tied for first with a pair of TD catches.

The other former Ute, defensive end Nick Heninger, joined the team later this summer after completing his bachelor’s degree. Being joined by Heninger and Mariner in Logan has made the transition a pretty seamless one for Repp.

“It’s been pretty cool, just because I was pretty close to them back at Utah,” said Repp, who is currently working on his master’s degree in kinesiology. “I mean, me and Siaosi came in together, and then me and Heninger played on the D-line together, so ... I definitely spent a lot of time with those two.”

When then-Utah assistant coach Gary Andersen decided to return to Cache Valley for his second stint as USU’s head coach, that made Repp’s decision to spend his final year of eligibility with the Aggies a relatively easy one. It was a no-brainer once Mariner elected to become an Aggie.

“We both came to our own conclusion that we were going to leave (Utah),” Repp said. “But we knew about (USU’s) offense and how it was last year, and once coach A (Gary Andersen) started talking to us, then we kind of started talking to each other a little bit.”

Repp was also recruited by BYU quarterbacks coach/passing game coordinator Aaron Roderick, who was an assistant at Utah when Repp first arrived in Salt Lake City. However, the chance to play for Andersen was too enticing for Repp to pass up.

So far, No. 87 has undoubtedly excelled as an Aggie.

“I feel like they do a good job of getting me involved (in the offense),” said Repp, who received scholarship offers out of high school from Utah, Nevada and Montana State. “... The guys are cool and everything about (this experience) has been cool.”

Even though he’s only worked with Repp for a short time, Maile has thoroughly enjoyed their time together. Maile raved about how coachable Repp is.

“He gets it,” Maile said. “He’s a natural at everything we ask him to do. You know, he makes my job easy, as far as when I give him a coaching point, he fixes it and he’s been on point with everything I’ve asked him to do, and he continues to grow. And he wants to be better, he wants to be better than what he is, which is the mentality you want these guys to have.”

What Repp lacks in shear size, he more than makes up for in length, athleticism, leaping ability — he has a vertical leap of 37 inches — sure hands and speed. In addition to being a standout receiver and defensive back in high school, Repp was a very good sprinter. He nearly broke the 22-second barrier in the 200-meter dash (personal record time of 22.17) and was a sub-49-second 400 runner (PR of 48.83).

As a result, not only do linebackers and safeties have a difficult time contending with Repp’s length and athleticism, but his speed. When he was a true freshman at Utah, Repp said, “I felt like (the senior linebackers) couldn’t keep up with me then.”

“I just knew that was my strong point and I couldn’t really put weight on, so I tried to take advantage of that in the offseason and work more on my speed ... because that’s where I’m going to have those mismatches,” said Repp, who finished with 34 receptions for 498 yards and five TDs, and intercepted a pair of passes in just six games (broken hand) as a prep senior.

In Repp, the Aggies have arguably the best pass catching tight end in the Mountain West. Repp ranks first in the conference among tight ends with five receptions per game, which is good enough for the No. 7 spot among all players.

“I think the tight ends get a bad rep as far as not being a threat in offensive systems, and he’s not that guy,” Maile said. “You can’t look at Caleb (as an opposing defense) and think you don’t have to worry about him, and so he’s just another problem defenses have to prep for. ... He’s going to cause teams problems.”

Despite being undersized, Maile asserted Repp is a good blocker and a well-rounded tight end. Repp was already battled tested from a physicality standpoint from his days as a defensive lineman.

“He is exactly who coach A told us he was and he hasn’t been anything other than that,” Maile said.

Repp has set some pretty lofty personal goals this season. No. 87 wants to finish the 2019 campaign with more than 700 yard receiving — he is hoping for 1,000 yards — and “be as close to 100 percent at catching balls that come my way.”

When asked about playing football beyond college, Repp is hopeful.

If professional football is not in the cards, Repp has expressed an interest in moving to Europe for a short time with his best friend. He is undecided about his future career, but Repp is considering becoming an elementary school teacher.