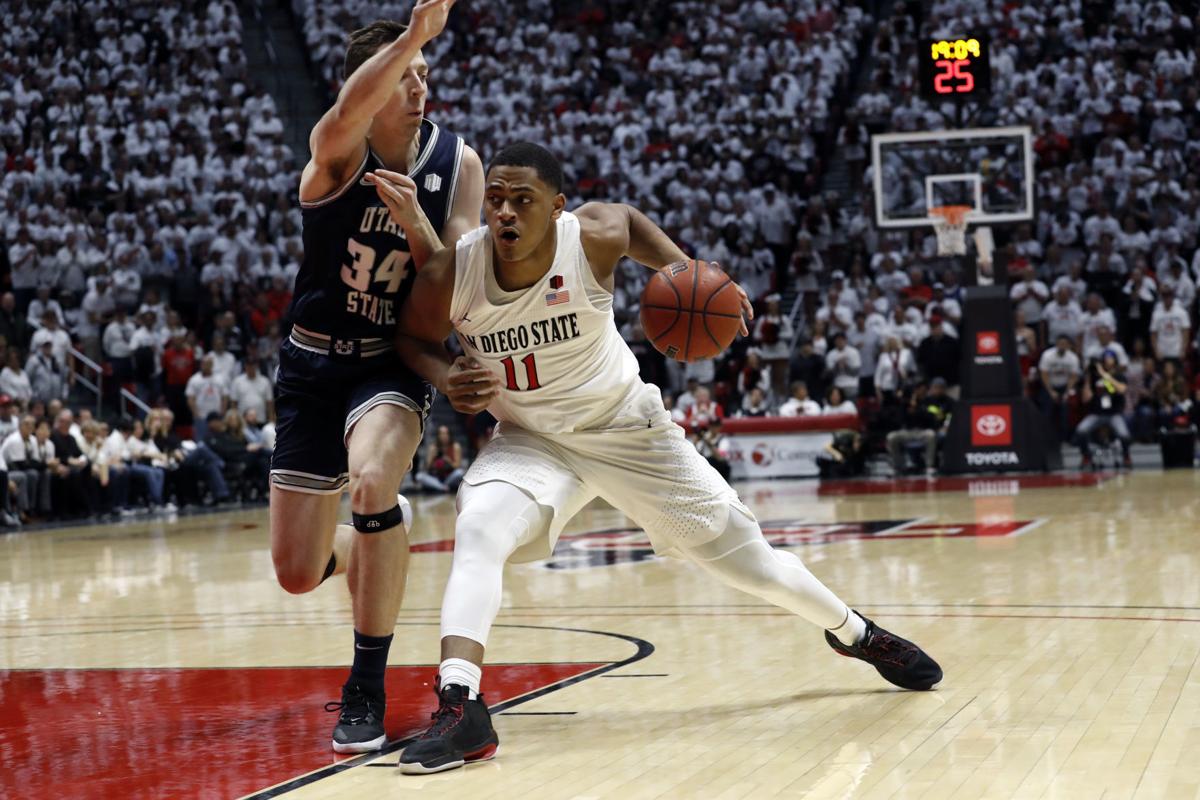 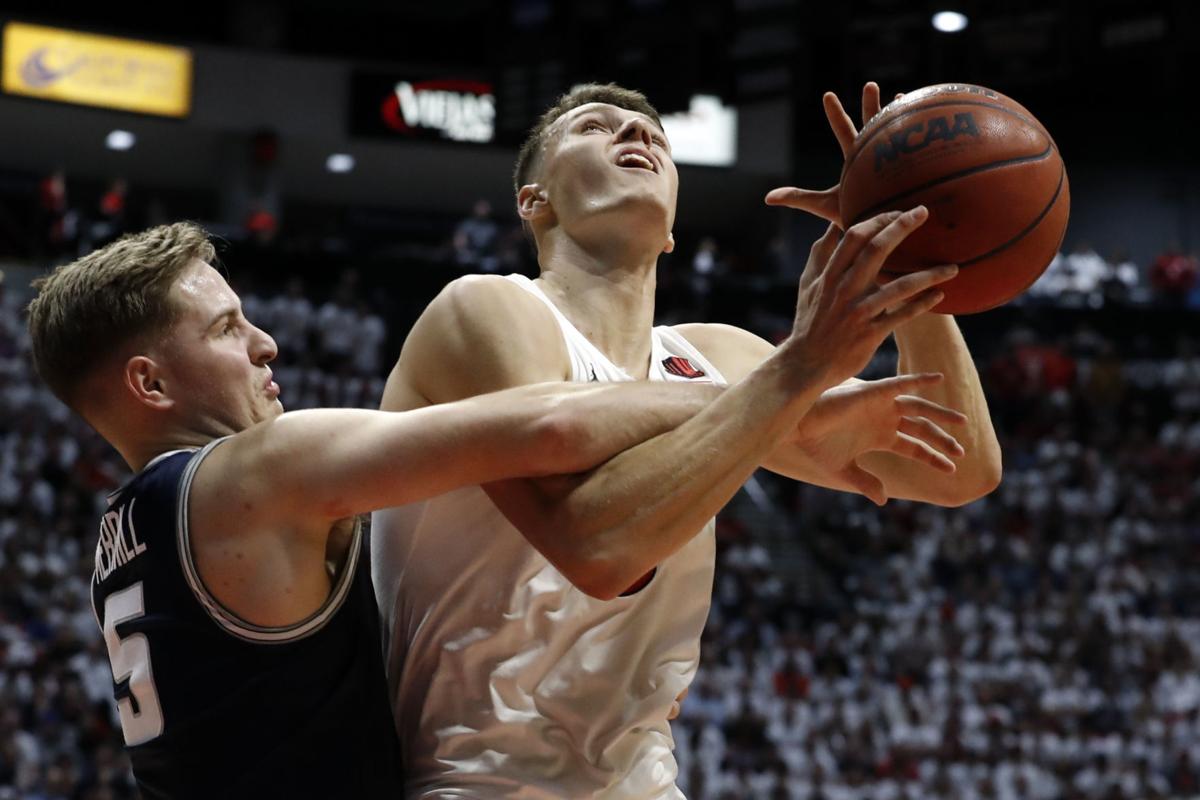 With just over a minute to play Saturday night at Viejas Arena, the San Diego State faithful seemed to collectively breath a sigh of relief.

The Aztec student section started changing “Undefeated” as No. 4 San Diego State held a 79-66 lead against the Aggie men’s basketball team. The Aztecs would indeed remain undefeated with a 80-68 Mountain West win.

The Aztecs then showed why they are one of the best teams in the country. In less than two minutes of game time, San Diego State went from trailing by five to being up five. Matt Mitchell hit a pair of 3-pointers and two free throws during the 10-0 run, while Yanni Wetzell came up with a steal for a dunk to really ignite the soldout crowd of 12,414.

“They (Aztecs) flipped the script in the second half,” USU head coach Craig Smith said. “... We had too many empty possessions in the second half. We had good looks, wide-open looks, just didn’t make them pay. ... Wetzell gets five offensive rebounds in the second half. Those are such energy plays. That tip dunk was a huge play. That certainly ignited the crowd, along with a few other plays.”

Wetzell had a rebound dunk earlier in the second half.

The quick eight points by Mitchell was just the start of an incredible half for the junior forward. With Kawhi Leonard getting his jersey retired at halftime, Mitchell may have been inspired by another native of Riverside, California.

Mitchell would end up with 24 points over the final 20 minutes, nearly matching the 29 the Aggies put up as a team. Mitchell had a season-high 28 points to lead all scorers.

“What a great night for an Inland Empire kid to have a great game, Kawhi Leonard jersey hanging,” SDSU head coach Brian Dutcher said. “Matt stepped up and did it with Kawhi sitting there courtside watching him play.”

“There’s definitely significance there,” Mitchell said. “Me having a big night and Kawhi’s big night, I feel like that’s very special and I’m happy I was able to show up tonight. At the same time, it’s a team sport and my teammates found me tonight, and on another night it would be another one of my teammates.”

Sam Merrill hit his fourth 3-pointer of the game and followed that up by just beating the shot clock with a jumper to tie the game at 54-54 with 11:20 to play. Merrill finished with a team-best 16 points and matched his career high with 12 assists.

The Aztecs then used a pair of 7-0 runs to take the lead for good. Mitchell had all seven points in the second surge, beating the shot clock from beyond the arc to start the run.

“Matt Mitchell just took over the second half,” Smith said. “He is very, very good player. When he starts to get going like that, he is a load, a mismatch nightmare.”

The Aggies left southern California hoping to get another shot at the Aztecs in the MW Tournament. USU had made 7 of 10 shots from 3-point range in the first half to take a 39-31 lead into halftime. In the second half, the Aggies shot 2 of 11 from long range.

Joining Merrill in double-digit scoring for USU was Brock Miller (15) and Justin Bean (13).

The Aggies are at No. 55 in the NET rankings on Monday, while the Aztecs remained at No. 1. … USU is now 17-103 against AP Top 25 teams and 1-23 against top five teams. … USU is now 1-5 this season when getting outrebounded as SDSU won the battle on the boards, 31-28. … Merrill scored in double figures for the 15th straight time this year, 21st time this season and 98th time in his career. He moved past Kevin Nixon (428) and into second on the career assists list with 439. With his four 3-pointers, Merrill jumped over Tony Brown (283) and into second for career 3-pointers with 285. … Diogo Brito played in his 110th game at USU, moving into a tie with Julion Pearre for 21st on the career list. … Neemias Queta tied his season high with three blocked shots. … The Aztecs are one of just three MW teams that lead an all-time series with the Aggies, 13-5, and have won seven in a row at home in the series.

Leonard became the first Aztec player to have his number retired and hoisted into the rafters at Viejas Arena.

Leonard, who currently plays for the Los Angeles Clippers, was on hand for the halftime ceremony. Two-time national coach of the year Steve Fisher was also in attendance Saturday night. Every fan at the sold out arena received a free commemorative Kawhi Leonard T-shirt, with No. 15 on the front and his name on the back.

Leonard played two seasons at SDSU (2009-10 and 2010-11), helping the Aztecs to a pair of NCAA Tournaments and the school’s first Sweet 16 appearance. He averaged a double-double during his Aztec career with 14.1 points and 10.2 rebounds in 70 games. In his two years at SDSU, the Aztecs went 59-12 and 25-7 in the Mountain West, winning two league titles.

Leonard was selected 15th in the 2011 NBA draft by the Indiana Pacers and traded to the San Antonio Spurs. He won NBA titles in 2014 (Spurs) and last year with the Toronto Raptors. He was the NBA Finals MVP both of those years.

The whole Clippers team was out on the court, as well as former teammates, family and Fisher, who introduced him and told the All-Star this was like the Senior Night he never had.

“What a great night for all of basketball and certainly for San Diego State,” Smith said. “Personally, he is my favorite player in the NBA.”

While he may not have shot the ball like he had wanted, Merrill kept things together early on and continued to distribute the ball to his teammates. He finished with a team-best 16 points on 5 of 12 shooting, including 4 of 8 from beyond the arc. The senior also matched his career high with 12 assists and didn’t have a turnover in more than 39 minutes of action. The guard also grabbed five rebounds. It was his first double-double of the season and third of his career.

Queta took out his frustration from earlier misses with a two-handed dunk off a pass from Merrill 6:30 into the game. Two minutes later, Merrill found Alphonso Anderson open for a two-handed slam.

The Aggies will have two games at home this week, beginning with UNLV (11-12, 6-4) on Wednesday. The Rebels lost at Colorado State on Saturday, 95-77. UNLV comes to Logan on a three-game losing streak. The Rebels did beat USU in Las Vegas back on Jan. 1, 70-53. Tipoff on Wednesday is scheduled for 8 p.m.