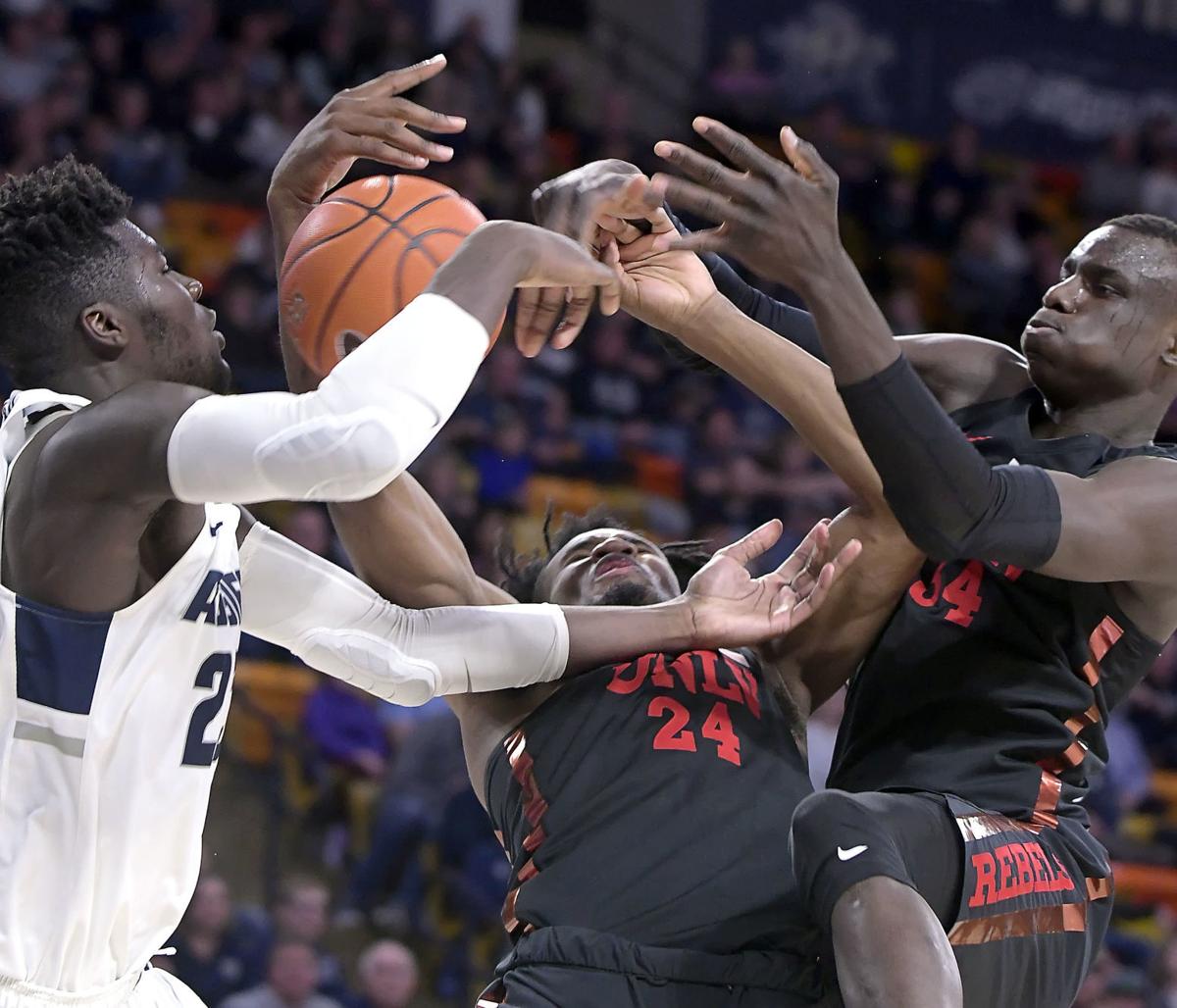 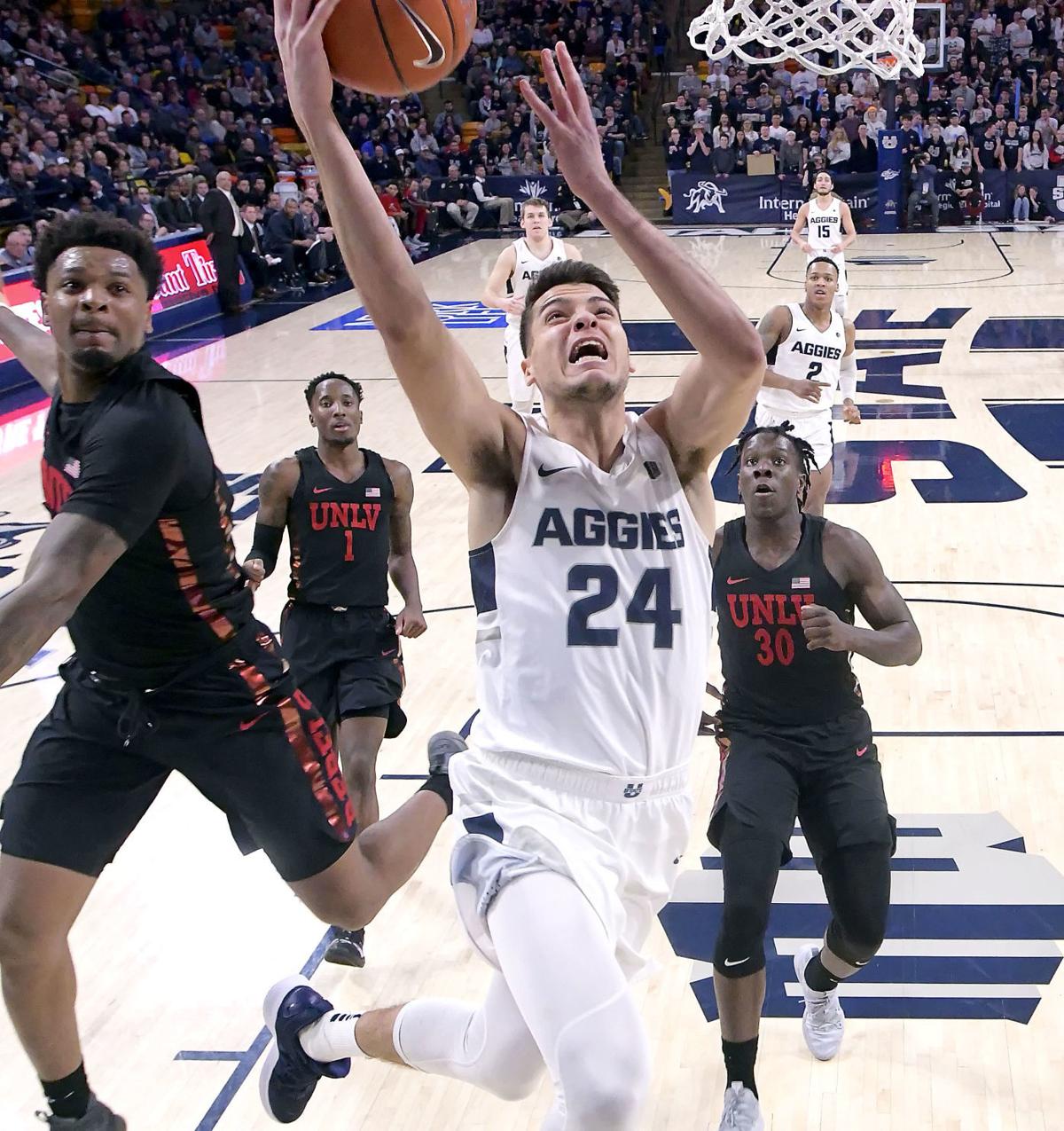 FRESNO, Calif. — In the first game to the start of the second half of league play, there is a lot on the line.

The Aggies and Bulldogs are tied for second in the Mountain West and just one game behind No. 6 Nevada. Both have already lost to the nationally ranked team from the league and don’t want to fall further behind.

Utah State takes on Fresno State on Tuesday night at the Save Mart Center for the right to keep nipping at the heels of the Wolf Pack. Tipoff is set for 8:30 p.m., and the game will be broadcast on AT&T Sports Net.

The Aggies (17-5, 7-2 MW) come into the game with plenty of momentum. They have won six straight — their longest winning streak in the Mountain West since joining the league six years ago. In fact, their last setback came against these same Bulldogs (16-5, 7-2) back on Jan. 9 in the Spectrum. A 3-point shot in the final seconds ended up being the game-winner for the Bulldogs that night, 78-77. USU has not lost since that heartbreaker.

Will that give the Aggies an added incentive in the rematch?

“Obviously, we owe them one after what happened at our place,” USU guard Sam Merrill said. “They are a really good team as we know, but we went down there last year and won, so we will be confident. We will make the adjustments we need to make.”

Yes, the Aggies did win in central California a year ago. They did so on a last-second 3-pointer. In fact, the last three games have been decided on a shot in the final seconds. USU has won two of those.

In the game last month, the Aggies led for all by five seconds of the game. Those five seconds just happened to come at the end of the contest. Braxton Huggins had a career night with 33 points and hit a 22-foot shot with five ticks left on the clock that ended up being the difference. Huggins had eight 3-pointers in the game.

“In the second half, they (Bulldogs) go 18 for 30 against us,” Smith said. “Braxton Huggins goes crazy. They went 15 for 31 from the three. That’s what they do, though. They can really get it going from the three.”

USU was up by 12 in the first half and held a 38-30 lead at halftime. But like they have against many teams in the MW this year, the Bulldogs rallied. Smith said his team will make some adjustments and do its best to try and get a lead and not let that happen again.

Since that loss in early January, the Aggies have been sharing the ball more, continuing to rebound and playing solid defense. That has helped add up to six straight wins, including three on the road.

“We are playing the way we need to play,” Merrill said. “We are sharing the ball. We say this 100 times, but we want to share the ball, we want to defend and we want to rebound. That’s what we’ve done throughout the streak, and hopefully that continues.”

Fresno State enters the rematch having won two straight and four of its last five. The Bulldogs only setback during that stretch was a 74-65 loss at Colorado State, but they were a bit short-handed with guard Noah Blackwell missing the game because of an injury. Right after beating USU, Fresno State lost at home to Nevada, 74-64.

“Fresno State is, obviously, a very good team,” Smith said. “They are in the discussion to be a NCAA Tournament team. Obviously, this is our second go-around with them. It was a game we, for the most part, controlled for the whole game last time and Braxton Huggins rose up and drilled a really difficult 22-footer to win the game. Give those guys credit for it. Obviously, they’re playing very, very well with only two league losses. They’re playing at a high level.”

In the first meeting this year, Blackwell had 13 points and six assists, while Deshon Taylor netted 11 points, Nate Grimes added nine points and eight rebounds. Grimes is averaging a double-double in MW games with 14.6 points and 10.9 boards. Huggins, Taylor and Grimes are the primary weapons for Fresno State as they are averaging 17.8, 16.2 and 12.5 ppg, respectively for the season.

“They play eight to nine guys regularly, especially with the injury to Blackwell,” Smith said. “But you can see Huggins, Grimes and Taylor are the three guys that consistently ... have almost twice as many shots as the fourth guy shooting in Williams. They know where their bread is buttered, and they play to those strengths.”

In that loss, Smith was not upset with how his team played. Against the Bulldogs, who like to press for most of the game, USU had 11 turnovers, shot 51 percent from the field and won the rebound battle. The Aggies did miss nine free throws.

“Our guys are excited,” Smith said. “We had another good practice today (Monday). We have a lot of momentum going right now. We have to take care of business.”

That’s exactly what they did last Saturday afternoon in the Spectrum. After giving up the first bucket of the game to UNLV, the Aggies reeled off eight straight points and never looked back. At one point USU was up 29 before clearing the bench in the 82-65 victory.

“We only play them (Rebels) once, so that’s an opportunity to immediately get the tie-breaker,” Merrill said. “Playing at home, we don’t feel like we should ever lose at home. We had that one slip up against Fresno.”

USU really wants to make up for that “slip up” with another road win. The Aggies have matched the win total from a year ago with nine regular season games still left to play.

“We are starting to build an identity of who we are, a culture of playing hard and playing together as a team,” Merrill said. “That shows with our assist totals, how we share the ball, how we defend, how we rebound. It’s been a good run so far, but our season goal was not to match 17 wins. Our season goal was to win the Mountain West title and go to the NCAA Tournament. So, we are going to continue to work towards that.”

USU breakout box (run on B1)