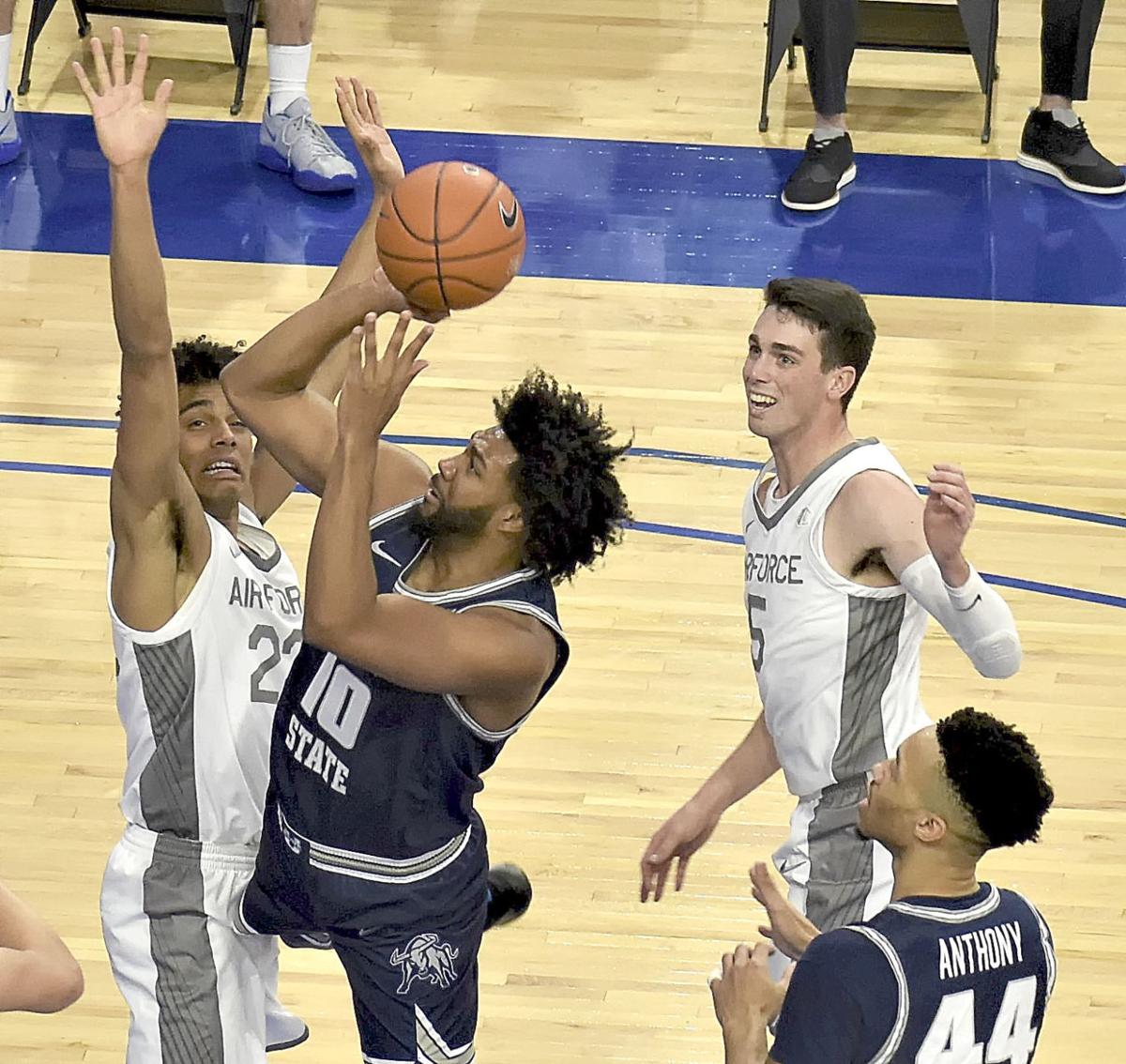 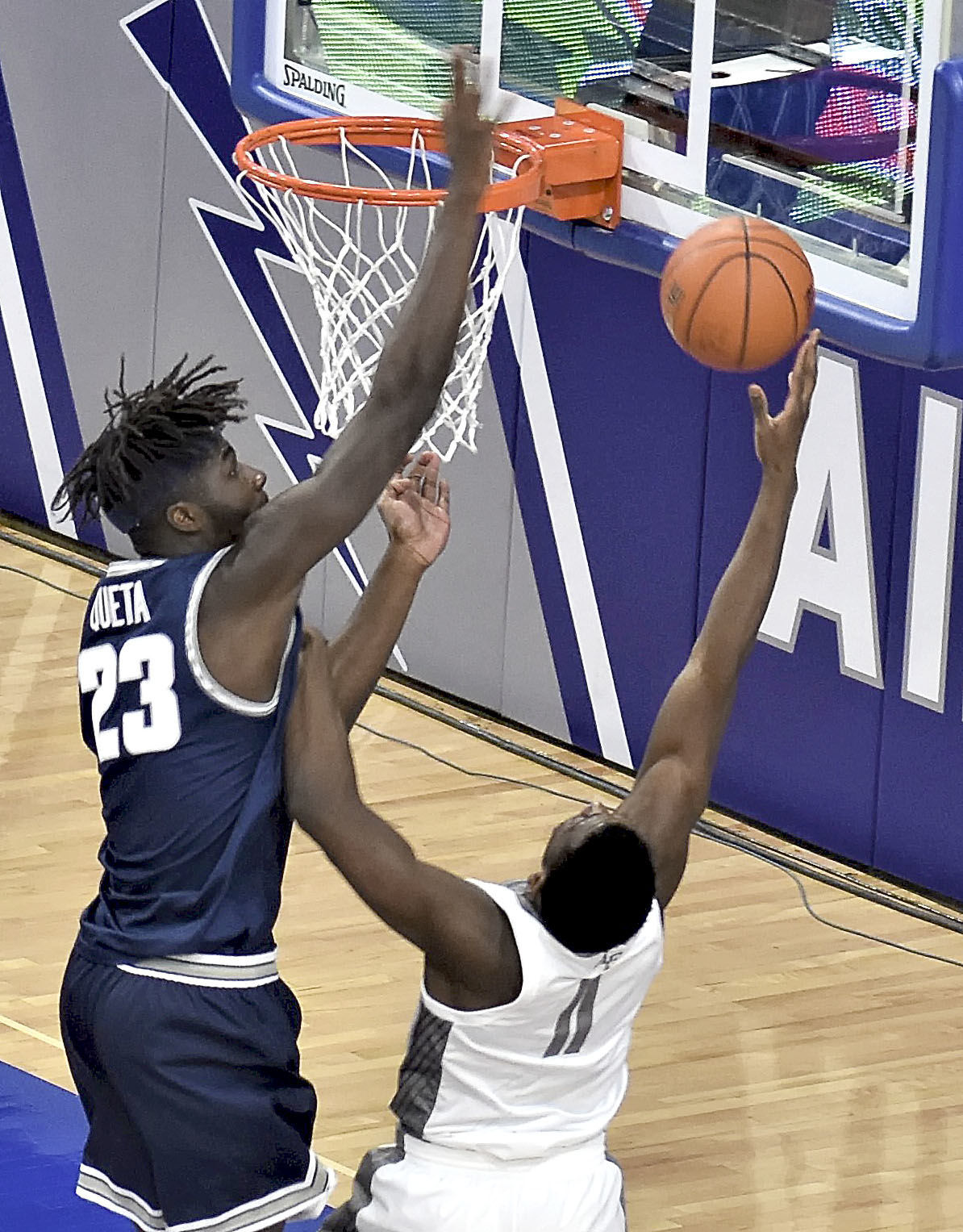 While there were plenty of crazy men’s basketball games going on around the Mountain West Conference on Saturday, the Aggies breezed to another road win.

“It’s always tough to win at Air Force,” USU head coach Craig Smith said. “Any time you win on the road, it’s always a good win. It’s always difficult, even without fans. ... We are still figuring things out and a work in progress. I like some things we did and there are some things we need to get better at. But any time you are winning on the road back-to-back, that’s a good thing for the Aggies.”

In other action around the MW, Colorado State rallied from 26 down to stun San Diego State in Viejas Arena, 70-67. Two days after winning by 52 points against San Jose State in Phoenix — the Spartans’ new home for now — Boise State found itself behind late in the game, but was able to pull out a 87-86 victory. In other action, Wyoming won at Fresno State, 78-74, and Nevada beat New Mexico in Lubbock, Texas, 84-74. The Lobos are currently playing their home games at a junior college in the Lone Star State.

With all five road teams winning last Saturday in league play, it is shaping up to be a wild conference. Currently USU and Boise State (8-1) sit atop the standings with 4-0 marks, while Colorado State (6-1) is 3-0 and Wyoming (7-1) is 1-0. The Rams and Cowboys play the Aztecs and Bulldogs, respectively, Monday night.

Saturday’s Aggie win at Clune Arena was the second contest USU has led from start to finish against Air Force (3-5, 1-3).

The Aggies used a 14-0 run to start the game. USU took a 33-20 lead into the break and then started the second half by outscoring the Falcons 17-6 over the first six minutes for a commanding 50-26 lead. Air Force got within 13 with 6:30 to play, but got no closer.

After getting 45 points from 26 Air Force turnovers on Thursday in a 83-48 win, the Falcons only turned the ball over 16 times, leading to 19 Aggie points on Saturday. Playing the same team twice with a day between games leads to some interesting game planning.

“There are good and bad things (in playing a team back-to-back),” Queta said. “For us, it’s easy to adjust for the second game. You don’t have to remember the scouting reports like we would if we had the regular schedule. We just know what we have to do because it is such a quick turn around. Other teams are going to be ready for us and adjust too.”

The head coach liked the start of the game, but not the later part of the first half.

“I thought we had a good mindset coming in and we got a great start, but sometimes it’s human nature,” Smith said. “We just started playing disconnected offensively. I think we wanted it easy. ... We responded to end the first half and played a lot better the first 10 minutes of the second half. It is different when you are here for four days. It’s not an excuse, we just have to learn how to handle that.”

“When we throw it in there (to Queta) great things happen,” Smith said. “Look at those numbers: Fifteen points on 10 shot attempts; Eleven rebounds, including four offensive; six assists with one turnover and four blocked shots. Neemie has always been a good passer.”

For the second straight week Queta was named the America First Credit Union USU Student-Athlete of the week. For the week, he averaged 12.5 points, 8.0 rebounds, 5.5 assists, 2.5 blocks and 2.0 steals per game, while shooting 70.6 percent from the floor and 50.0 percent at the free throw line.

Brock Miller and Rollie Worster each added 13 points. It was the fourth straight game Miller has recorded double digits in scoring. In fact, the junior leads the Aggies in MW games in scoring with 13.3 ppg — up from his 8.7 average on the season.

USU shot a season-high 54.5 percent on Saturday and has shot 50 percent or better from the floor four times this season, including each of the last two games and three of the last four.

The Aggies head back on the road this week. This time they are off to Texas to take on New Mexico (3-4, 0-4) in a two-game series, beginning on Wednesday at 8 p.m.

The Aggies are 6-1 this season and 52-7 when leading at halftime with Smith as the head coach. … The Aggies won the rebound battle, 38-21, for the 10th straight game this season and are 59-11 under Smith when that happens. … With four blocked shots Saturday, Queta is now tied with Nate Wickizer for second on the career list with 148. … Anthony had a career-high two blocked shots. … The Aggies lead the all-time series with the Falcons, 21-6.