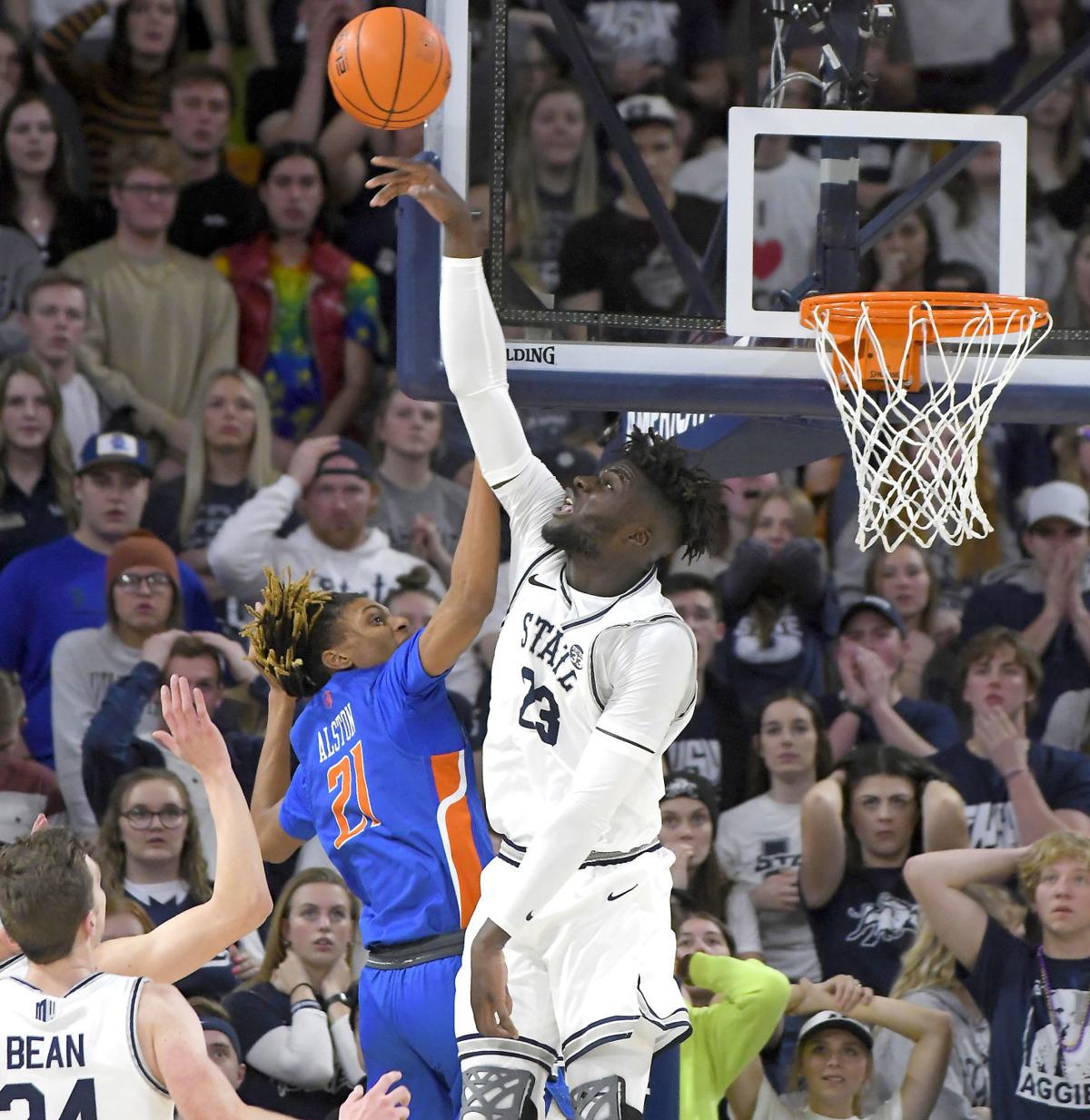 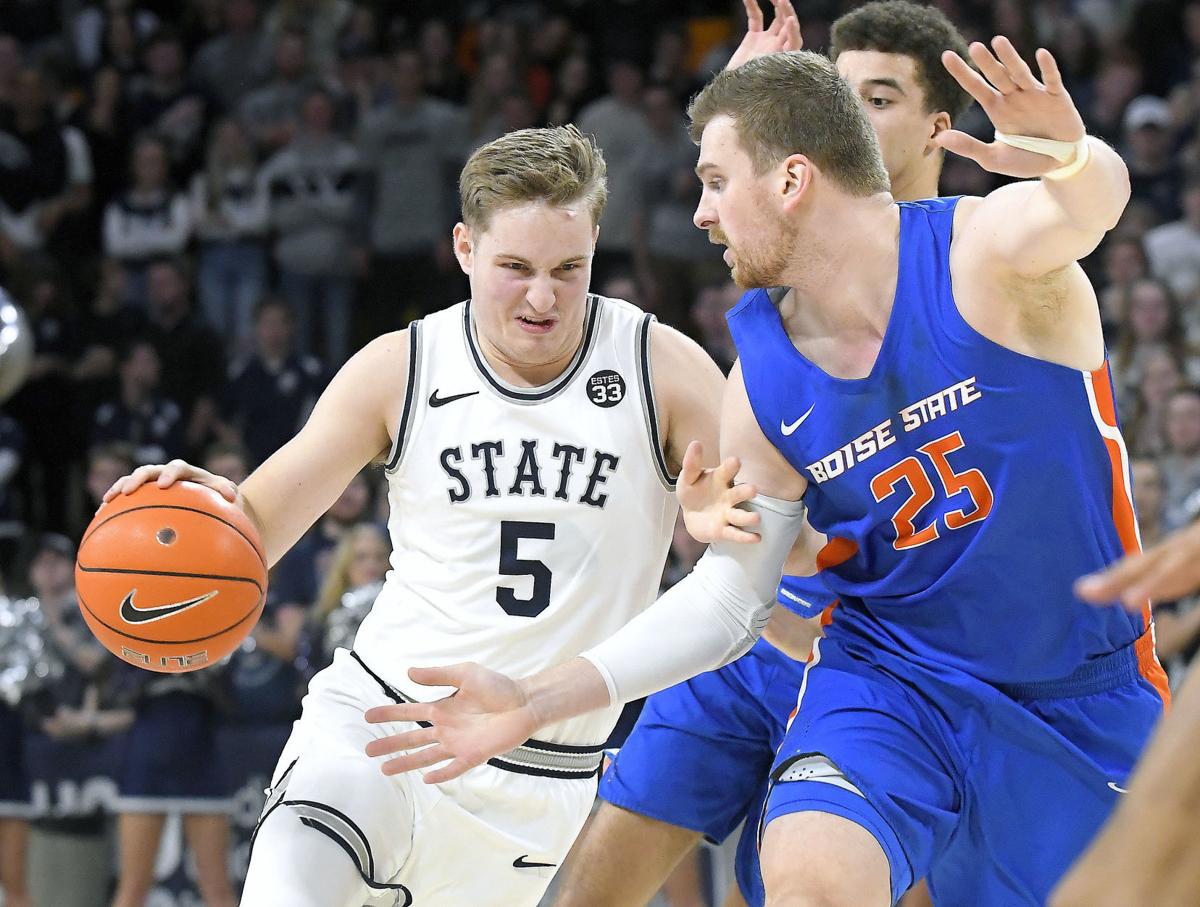 With Sam Merrill in foul trouble early in the second half Saturday night, it was not looking good for the Aggies.

Despite Merrill sitting for 12 minutes and 34 seconds in the second half, the Aggies found a way to win without their senior leader. USU moved into a tie for third, just a half game out of second place in the Mountain West with a 70-61 win.

“We just were really poised in the second half when things didn’t go our way,” said Aggie forward Justin Bean, who had seven points and a career-high 16 rebounds. “Obviously Sam (Merrill) got in foul trouble and there is nothing you can do during those times when the calls don’t go your way. I’m sure the other team felt the same way. At the end of the day, we had to be the toughest team, come together and make winning pays. That’s what we did.”

Bean said the team knew there was no replacing Merrill, but they agreed that everyone had to “pick up the slack.” The Aggies picked up the intensity on defense.

Merrill picked up his fourth foul 40 seconds into the second half on the offensive end as he was driving. USU head coach Craig Smith voiced his displeasure and was issued a technical foul. Merrill went to the bench, having scored 11 points in the first half and having averaged 30 points a game against BSU over the previous three contests.

“It’s always tough when a guy has three, but a guy like Sam, I trust him like crazy,” Smith said. “We play him all the time when he has foul issues and he is able to negotiate it.

“... You try to have a game plan and maybe a script of how you can attack. That’s all fine and dandy, but then you get a game like this and you have to wing it a little bit on the fly. ... At the end of the day, our guys played with poise and confidence.”

Merrill came back into the game at the 6:46 mark. USU had remained in front the whole time during his absence, but clung to a 51-47 lead. The Broncos (16-9, 8-5) had gotten within two, but each time the visitors threatened to tie the game or take the lead, the Aggies got a stop and scored.

With Merrill on the bench, Diogo Brito came on. He made several big plays on defense and hustled for several easy baskets on the other end as he finished with 11 points and seven rebounds. Sean Bairstow also gave USU valuable minutes.

Coming into the game, Merrill had been averaging nearly 37 minutes a game in MW play. He played 23 minutes Saturday night.

Neemias Queta came up big for USU as he scored a game-best 21 points, grabbed eight rebounds and blocked five shots.

Queta’s take on the win?

“We were able to make plays on the offensive end and got stops on the defensive end when we needed it,” Queta said. “Justinian (Jessup) played a really good game, (Alex) Hobbs too. We just needed to make sure (Derrick) Alston wasn’t going to have one of those games where he gets it going early. We held him to seven points, which is really good.”

Alston did only score seven points. He came into the game averaging a team-best 19 a game. Jessup led the Broncos with 20 points, while Hobbs added 15.

Queta scored 11 of his points at the foul line, where he made 11 of 14 free throws. Last year the Aggie center shot 56.5 percent at the line. This season he is making 72.1 percent of his foul shots.

“For a time, the only thing I could do was shoot free throws,” said Queta, referring to when he was out with an injury. “As you can see, it’s working.”

Merrill finished with 17 points, including eight at the foul line. USU made 30 of 35 shot at the free throw line for the game.

The Aggies led for nearly 37 minutes of the game, but the Broncos hung around until the bitter end. USU scored the final eight points to seal the victory.

“It was ugly at times, but we found a way to win the game,” Smith said. “We got off to a good start and had some opportunities where we could have been up by 20 at halftime. We missed layups and so many wide open threes. To be able to survive and win this game is big.”

The Aggies moved up four spots to No. 48 in the NET rankings after the win Saturday, while the Broncos are at No. 94. … Boise State assistant coach Tim Duryea was the head coach at USU for three years and spent 17 years in Logan as he was an assistant with Stew Morrill before taking over as head coach. … USU is now 18-2 this season when outrebounding the opponent as it won the battle on the boards, 48-31. … The Aggies had a season-high eight blocked shots. USU improved to 17-2 this season when its bench outscores the opponent as it did Saturday, 16-8 … Merrill scored in double figures for the 17th straight time this year, 23rd time this season and 100th time in his career. He now has 1,996 career points. … Brito had one steal to pull into a tie with Tai Wesley (112) for 10th on the career list. He also had 11 points, and USU improved to 26-0 when Brito scores in double figures over the last two seasons. ... The Aggies lead the all-time series with the Broncos, 34-16.

There was plenty of fanfare before and at halftime of Saturday night’s game as Utah State is celebrating 50 years of the Spectrum being the home of the Aggies.

Before the game, Aggie All-American Wayne Estes was honored as Saturday was the 55th year to the date of when he went over 2,000 career points. After that game, Estes and some friends stopped at the scene of a car accident near campus. While crossing the street, Estes brushed against a downed high power line and was tragically electrocuted.

Ten minutes before the game, the shoes Estes was wearing was placed at the spot of his final shot and a short video of him playing was shown. The Aggie team stood along the court to honor him, as did the crowd.

The Aggies wore throwback jerseys in the game from 1965, with a No. 33 patch on them in honor of Estes.

Also before the game, legendary coach Ladell Andersen was honored just before starters were introduced. He passed away in December at the age of 90. His initials “LA” were placed on the baseline of the west side of the court.

“It was nice to celebrate the Spectrum,” USU head coach Craig Smith said. “To have the throwback uniforms, which our guys designed, I thought was fantastic. The atmosphere before the game was great. … It was just an amazing day in so many ways.”

A last-second shot by Marlene Aniambossou lifted the Aggies to victory at Boise State Saturday afternoon.

The USU forward hit a jumper as time expired to give the Aggies a 58-56 win, snapping a four-game losing streak. Aniambossou scored 11 points off the bench.

Trailing 40-36, the Aggies battled back in the fourth.

The USU women are next in action Wednesday at 11 a.m. when Colorado State visits the Spectrum.