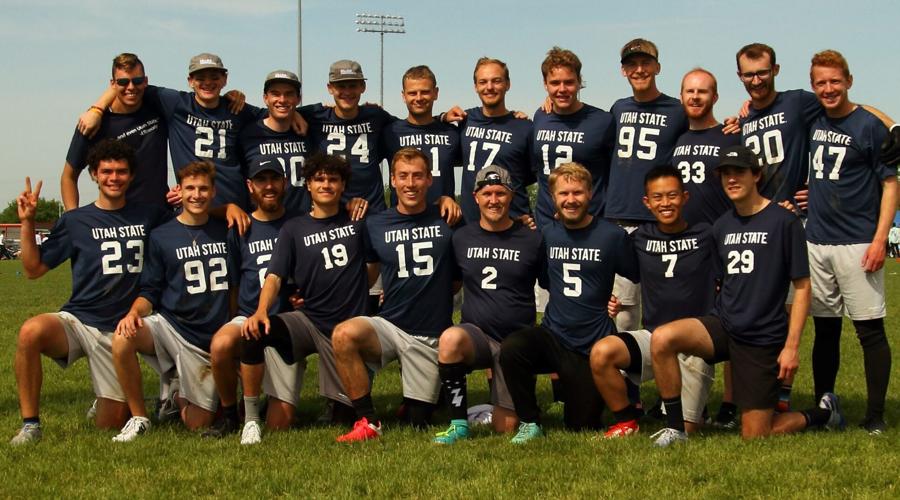 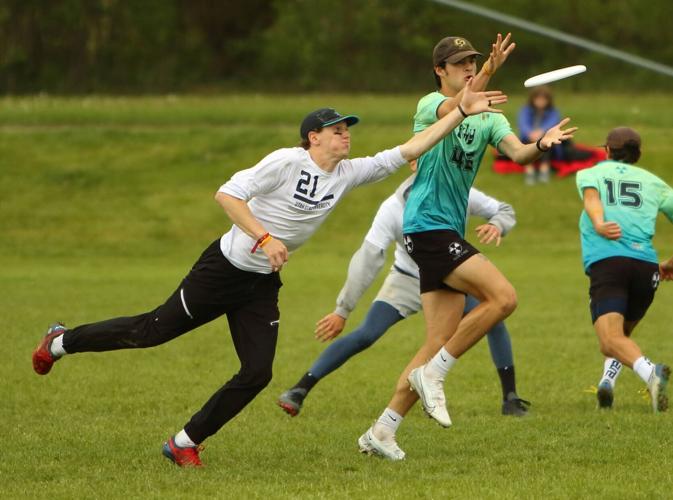 Utah State’s Ben Hoffman (No. 21 in white) tries to break up a pass against Cal Poly at the USA Ultimate Division I College Championships last week in Milwaukee. 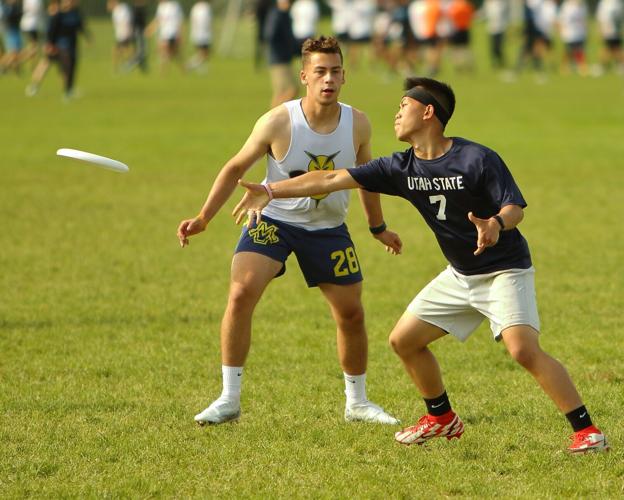 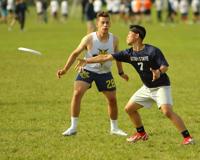 Utah State's Henry Nguyen throws a backhand in a game against Michigan at the USA Ultimate Division I College Championships last week in Milwaukee. 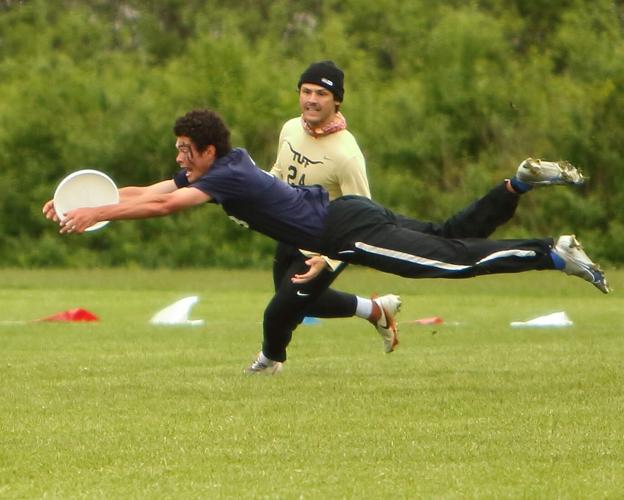 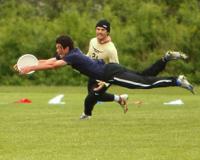 Utah State's Tony Mounga lays out on defense in a game against Texas at the USA Ultimate Division I College Championships last week in Milwaukee. 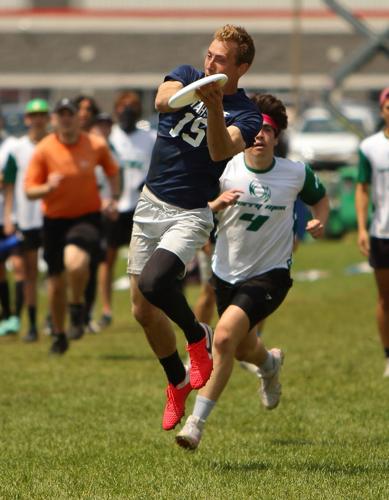 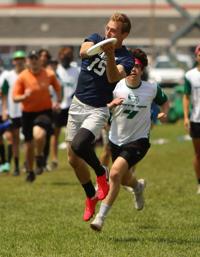 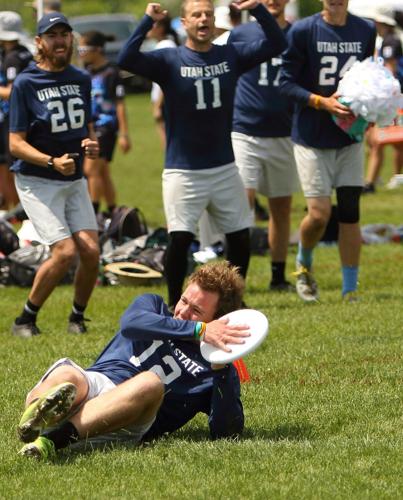 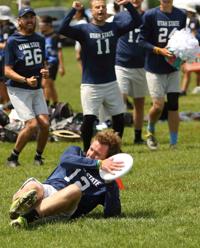 Utah State’s Ben Hoffman (No. 21 in white) tries to break up a pass against Cal Poly at the USA Ultimate Division I College Championships last week in Milwaukee.

Utah State's Henry Nguyen throws a backhand in a game against Michigan at the USA Ultimate Division I College Championships last week in Milwaukee.

Utah State's Tony Mounga lays out on defense in a game against Texas at the USA Ultimate Division I College Championships last week in Milwaukee.

Editor’s note: A high school ultimate Frisbee story will appear in a future edition of The Herald Journal.

To say the 2022 ultimate Frisbee season was a special one for the Utah State men’s club team might be a bit of an understatement.

The Aggies turned a lot of heads in 2021 when they advanced to the USA Ultimate Division I College Championships for the first time in program history. It was, indeed, a historic moment for the club, but that December trip to Norco, California, was a bit of an eye-opener as USU went 1-5 and lost its four poll play games by scorelines of 15-8, 15-6, 15-9 and 15-10.

Fortunately for the Aggies, they returned nearly their entire roster for the ensuing spring season and they were determined to prove they belonged on the national stage. Mission accomplished as USU won the Northwest Regional Championships for the first time ever and then was very competitive in all five of its games at nationals, which took place from May 27-30 in Milwaukee.

“As much as we don't want to admit it, our team was just kind of happy to be there (last December) and we honestly didn't play all that well,” USU captain Garrett Martin said. “We barely got to 10 goals on anybody. I think we scored 10 goals in two out of our six games in the fall, vs. this year (where) every single game we scored 11 or more goals. ... It felt really, really good to see the team go from not even being very competitive in the region my first couple of years to being competitive with any team in the country my last year. And it's something that I take a lot of pride in and I think everybody who's been a part of these last few years should be really, really proud of where the team's at right now.”

Aiding USU in its quest to national prominence as been a long and winding road for Martin, who graduated from Sky View High School in 2016. Martin has been playing for the Aggies since 2017 and has developed into a well-respected ultimate Frisbee player at the national level.

The North Logan native earned a spot on one of the top men’s club teams in the country in the Seattle Sockeye and helped propel them to a national championship in the fall of 2019. The title game was televised on ESPN. Additionally, Martin currently stars for the Salt Lake Shred, a semi-professional team that plays its home games at Zion Bank Stadium in Herriman.

There’s no question Martin, who led Sky View to a state championship in 2015, has made his mark in the sport he has a profound passion for. However, none of those other achievements measure up to the transformation Martin has helped the Aggies undergo.

“I mean, in the eyes of the ultimate Frisbee world, it's probably not that high, considering it's D-I nationals,” said Martin, who graduated from USU last month. “But to see the team go from where it started to where it's at now is just something that I'm extremely proud of. When I compare my other accomplishments like winning state in high school, that's a huge deal, but Sky View had always been really, really good and competitive, and (my senior class) was just there to cap it off. And then Sockeye has been in the national championships a whole bunch of times. I mean, the one we won was the fourth for the program, so that obviously was a huge, awesome deal, but it wasn't like I just got there and changed anything or was a part of processed growth.

“But with Utah State, when I first got there in 2017, the team was not very good, hadn't qualified for regionals in 10-plus years or whatever. And we made regionals that first year and that was a huge deal to make regionals. And so if you just have that context and look at where the team is now, that's why it's such a big deal to me.”

The Aggies finished the ’22 season ranked 15th out of 377 teams at the collegiate level. Only 20 squads punch their ticket to nationals. In order to qualify from the Northwest Region, a team must either win the tournament or place second, which is extra challenging because the team that loses in the Northwest Region title game must turn around and play in a true second-place contest.

Northwest Regionals took place from May 7-8 in Walla Walla, Washington.

“It's super hard to put into perspective because going into the weekend that wasn't necessarily our main goal,” Martin said of capturing a region title. “It was obviously just to get to nationals again. But we finished Saturday undefeated and we knew we just had to beat Oregon State to qualify for nationals again and win the region. I mean, that's all I could think about that night. I remember just sitting in my hotel room thinking how surreal it was that we even had the opportunity to win the regional championship. And then when we went out for that game, I don't think we trailed for a second and we were significantly in control of that whole game.”

Prior to their success in The Evergreen State, the Aggies claimed another Big Sky Conference title. That tournament took place in mid-April and USU went 3-0, with dominant wins against Boise State and Washington State, plus a hard-fought 15-11 triumph over Utah, who finished the season ranked 45th nationally. The Aggies have won five straight in their series against the Utes.

The Aggies took a 13-game winning streak into nationals, where they were seeded 13th out of 20 teams. USU went 1-3 in poll play, but were a few big plays away from going 4-0.

Brown ended up losing to No. 2 North Carolina in the championship game. It was the Tar Heels’ second straight national crown.

And while the Aggies were hoping to win more than two games, they certainly proved they belonged at nationals.

“I think (we gained) a lot (of respect) and I think a lot of that has to do with the fact that we've now made nationals twice in a now, with the fact that we won our region this time and not just qualified, but won our region,” Martin said. “... We made every team have to respect us or they were going to lose to us. Even the No. 1 team in the country, we went on a pretty big run against them and made it really close down the stretch, and so I think everybody now nationally will respect Utah State instead of think, 'oh, it's Utah State, it's a gimme game.’”

Why did the Aggies perform much better at nationals this time around?

“We were a much deeper team this year than we were in the fall,” Martin asserted. “I mean, we were a very similar team (personnel wise, but we improved a lot). Like our one through five were still one through five. They were still really, really good, elite players, but six through 20 were now much more consistent players. They were playing consistently at a high level.”

When Martin first started playing at USU, he said only about 10 percent of his teammates had experience competing at the high school level. However, the lion’s share of the athletes on USU’s regional championship squad — 80 to 90 percent, Martin guesstimated — played on a high school club team.

The popularity of high school ultimate Frisbee has proliferated in Cache Valley in the past five or so years, which has really helped the Aggies. In addition to Martin, there were 11 other Cache Valley natives on USU’s roster this season in Zach Balls, Ryan Beck, Jonny Hoffman, Ben Hoffman, Jaren Newswander, Henry Nguyen, Jake Osborne, David Peterson, Samuel Huntzinger, Skyler Jones and Calvin Clark. Ben Hoffman is also a high jumper on USU’s track & field team.

“The fact that the high school system is growing in Utah and Cache Valley in particular — and that all connects as a direct feeder system to our program at Utah State — it just makes our base line so much higher because there's not the fundamentals that have to be taught, like how to throw a forehand, how to throw a backhand,” said Martin, who is a first-team all-region performer. “People know how to throw, they know how to play (organized ultimate) now. Now it's just sharpening those tools up to the college level and so the floor is just much higher right away because of that feeder system.”

Jones, who has played at USU as long as Martin, was one of three captains on this year’s team, along with Bracken Wright. Like Martin, Jones played his high school ultimate at Sky View, while Wright played at Lone Peak.

In addition to Martin, both Hoffman brothers and Mounga are currently showcasing their talents for the Salt Lake Shred, as are local brothers Chad and Luke Yorgason. The Yorgason brothers play for BYU, which finished the ’22 campaign ranked fourth nationally.

Three weeks ago, the Green Canyon girls reigned supreme at the state tournament, as did the Logan boys in the Division II bracket. Additionally, a local team won the middle school division. Indeed, it has been a banner spring for ultimate Frisbee players from Cache County.

“I think it's been an awesome thing to see,” Martin said. “I think it also gives me a lot of hope as to where the programs here are going. I think people like Dave Hoffman, who runs the Cache Valley ultimate league, around here have a lot to do with that because people are just playing a lot more now. ... I just think that this is a very sustainable growth that we're seeing right now in Cache Valley.