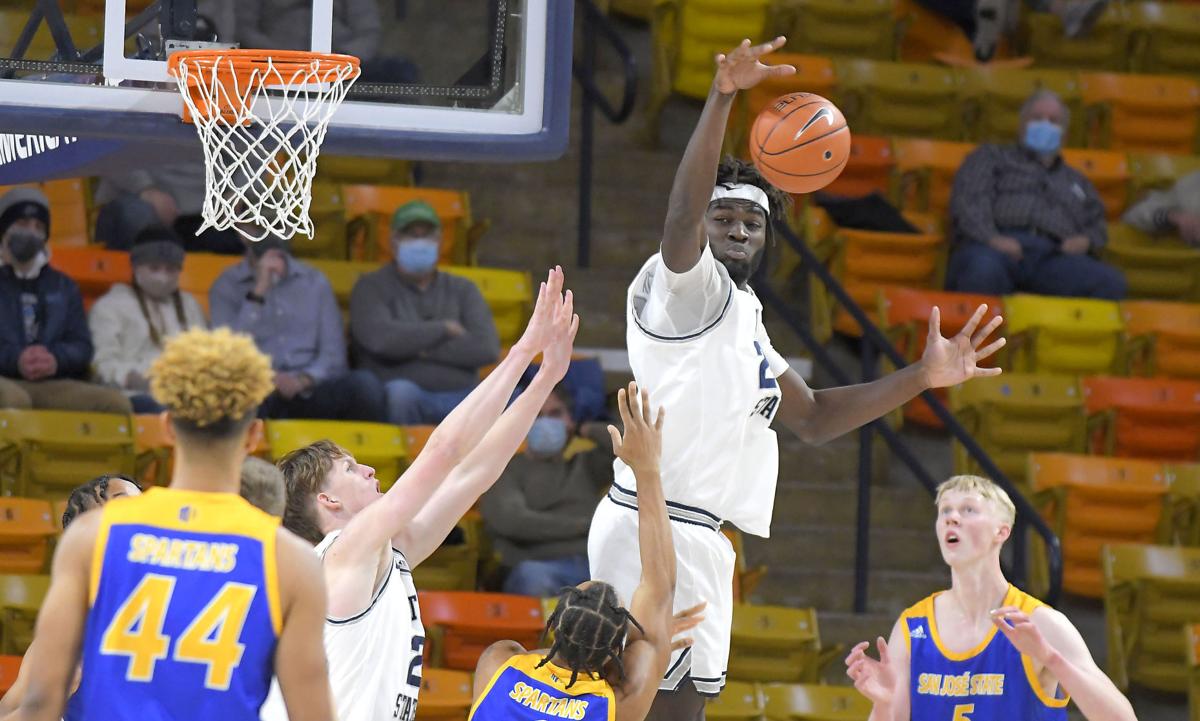 Utah State center Neemias Queta blocks the shot of San Jose State guard Caleb Simmons during the first half on Monday in Logan. 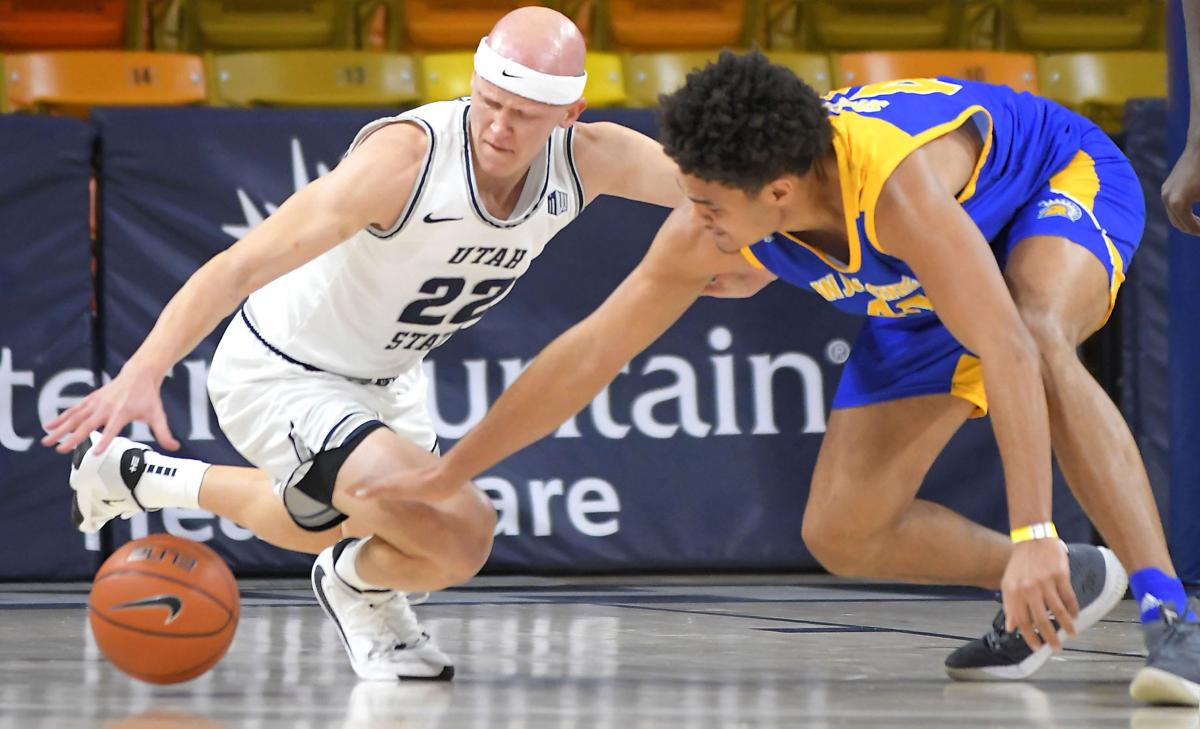 Utah State guard Brock Miller (22) and San Jose State forward Chase Courtney scramble for a loose ball during the first half on Monday.

Utah State center Neemias Queta blocks the shot of San Jose State guard Caleb Simmons during the first half on Monday in Logan.

Utah State guard Brock Miller (22) and San Jose State forward Chase Courtney scramble for a loose ball during the first half on Monday.

If there was any doubt of the outcome in the Aggies Mountain West Conference opener at halftime, it was quickly put to rest early in the early moments of the second half.

It was all Utah State Monday night at the Dee Glen Smith Spectrum. The Aggies began the second 20 minutes by scoring the first 19 points and just kept their foot to the gas pedal against San Jose State. USU blew by the Spartans 107-62 in front of 1,354 fans.

“Starting off conference play, you always want to start out with a win and come out with an edge,” said Aggie forward Justin Bean who had another double-double with team highs of 16 points and 11 rebounds. “We did that tonight. We shared the ball. We played the most connected we have all year, and didn’t turn it over as much.”

Utah State (4-3 overall, 1-0 MW) had a season-high 27 assists on 43 made field goals and turned the ball over just nine times for the game. Several of those turnovers came in the final minutes with young guys off the bench.

“That’s a good W for the Aggies, first game of conference play,” USU head coach Craig Smith said. “It’s always nice to get out to a good start. I thought we had a great team effort, we played very hard and very disciplined for 40 minutes.”

“I loved how we played on both ends of the floor,” Smith said. “I thought we really shared the ball on the offensive end. ... I thought we really played together. We had 27 assists and nine turnovers. It was everybody sharing the ball, moving the ball, playing for each other in the middle game, inside game, outside game. It was exciting to see. It was a great team effort.”

Brock Miller drilled a 3-pointer to start the second half, and USU rolled from there. Before SJSU would score again, it was down 66-26.

It just kept getting worse for the visitors. The Aggies reeled off nine straight points for a 75-31 lead with 12:20 to play. It got worse.

The largest lead came with 3:22 left in the contest. Zahar Vedischev drilled his second trey of the game to give USU a 104-55 advantage.

“We came out with the right mindset today,” Bean said. “I thought we were really good with our scout and our prep. … It felt really good to see everyone get an opportunity to come out and play their best, and start off on the right note in conference play.”

Joining Bean in double-figure scoring was Miller (14), Marco Anthony (12) and Steven Ashworth (10 off the bench. Trevin Dorius had 10 rebounds off the bench to go along with eight points. Neemias Queta only took three shots and made them all, as well as both free throws he took. Queta grabbed nine rebounds and matched his career high with six blocked shots while playing just 15 minutes.

The Spartans were led by Richard Washington with 20 points, but most came late in the contest. Still, those 20 were more than six less than his average.

“We got outrebounded tonight (59-36),” SJSU head coach Jean Prioleau said. “We didn’t make our free throws (10 of 21). I thought Utah State played a lot more physical than we did, and we couldn’t answer the call on that. The toughness and the effort showed up in the offensive rebounds in the first half. That’s basically where the game got away from us. They beat us pretty good in both halves.”

After falling behind 4-3 in the early going, the Aggies turned up the heat on defense and started pushing the ball. USU reeled off 10 unanswered points to seize the lead for good. Bean scored three straight buckets, and Dorius put a rebound back in to give the hosts a 13-4 lead with 14:05 left in the opening half.

The Spartans went nearly four minutes without scoring and six minutes between field goals. Meanwhile, the Aggies were off and running again after the initial surge.

Anthony sparked a 15-5 run with a drive to the basket for two. Anthony capped the run with a dunk off a tip pass from Queta, and USU held a 28-11 lead at the 8:52 mark of the first half.

Anthony would have two more slams before the break. The third came off a pass from Bean, giving the Aggies a 47-26 lead at the break.

USU doubled up SJSU over the first 20 minutes in the rebounding department, 32-16. The Aggies had an impressive 16 offensive boards and turned those into 20 second-chance points.

That was just the start of more highlights in the second half.

“We came out of the locker room in the second half with 10 straight stops and were able to put a little run together,” Smith said. “Some really good performances all the way up and down the lineup. I’m not sure I can say that one guy was bad in any aspect. It’s exciting to see. It’s a great way to start the conference season. Now we have to turn around and bounce back quickly to play again on Wednesday against the same opponent. It’s going to be different for everybody.”

The Aggies starting lineup was back to how they started the season: Marco Anthony, Rollie Worster, Brock Miller, Justin Bean and Neemias Queta. … USU assistant coaches Eric Peterson and David Ragland and special assistant to the head coach Justin Johnson were all back with the team Monday after missing the last game. … The Aggies won the rebound battle, 59-36, for the seventh straight game this season. … All 15 Aggies that dressed saw at least two minutes of action and 12 scored. ...  USU made a season-high 51.8 percent of its shots from the field and held SJSU to 32.9 percent shooting, which is a season-low for an Aggie opponent this season. … The Aggies got a season-high 51 points off the bench. … The Aggies lead the all-time series with the Spartans, 65-22, and are 37-4 in the Spectrum against SJSU.

Redshirt freshman Liam McChesney did not dress for the last two games and won’t be in uniform for a while. The 6-foot-10 forward broke his left leg in a practice last week.

“Our first practice back (from being off a week because of COVID protocols) he fractured his leg,” Smith said. “He doesn’t have to have surgery, but it is going to be a long recovery. I feel bad because Liam has been showing tremendous progress.”

McChesney had seen action in three games this season after getting over an illness this fall. He was averaging 3.3 minutes in the contests he got in, scored two points, grabbed three rebounds and came up with a steal.

“He was going to have a good opportunity to be on the floor,” Smith said. “He was playing very well and doing some very good things. I told him during the quarantine he was doing good things and knocking on the door. His biggest issue was staying healthy. Then he gets hurt on a freak play. He just landed wrong. He is in great spirits. That kid has come a long way. Liam has a bright future. He is a very, very talented young man.”

USU began the 2020-21 season with its toughest schedule since the KenPom era began (2001-02). The Aggies’ first four opponents were ranked among the top-100 in the nation.

The Aggies are one of just eight teams in the country to face four top-100 teams over the course of their first four games of this season.

It was announced Monday afternoon that the Aggies two-game series against New Mexico will in fact be played in Lubbock, Texas. The Lobos have had to leave the Land of Enchantment to compete this season.

The games will be on the campus of Lubbock Christian University inside the Rip Griffin Center and without fans. The games are scheduled for Wednesday, Jan. 6, and Friday, Jan. 8.

Both games will appear on national television. The Jan. 6, contest will be on CBS Sports Network at 8 p.m. On Jan. 8, the game will air on FS1 at 9 p.m.

Justin Bean nearly had a double-double by halftime. The junior quickly recorded his third of the season and sat most of the second half. He finished with 16 points on 8 of 10 shooting from the field. Bean had 11 rebounds and four assists in just 20 minutes of action.

Trevin Dorius got the first dunk of the game thanks to Justin Bean pushing the ball up the court and then finding the big man for a two-handed jam midway through the first half. Marco Anthony recorded his first dunk of the season a few minutes later off a nice tip pass from Neemias Queta. Anthony made it two in the first half with a drive to the bucket and one-hand throw down, and then three with a slam just before halftime off a nifty pass from Bean.

Queta got into the action with a throw down less than two minutes into the second half off a pass from Rollie Worster. That duo hooked up again on the next possession as Queta increased his overall lead. Queta then found Alphonso Anderson for a jam. Szymon Zapala joined the dunk party with a rebound and two-hand slam.

The Aggies remain at home and face San Jose State again on Wednesday night in the Spectrum for the second of the two-game series. This will be the first time USU has played the same conference opponent in back-to-back games since the 1990-91 campaign, where the Aggies took on the Spartans twice in a row as members of the Big West Conference.

San Jose State rallied to a 78-73 win over USU in the MW opener for both teams on Monday night in Phoenix. The two teams will square off Wednesday at the same venue.

USU’s Bre Matthews came off the bench to score a game-high 22 points on 9 of 12 shooting from the field. The rest of the Aggies only knocked down 18 of 63 (28.5 percent) shots from the field.

Jessica Chatman chipped in with 14 points and a team-high eight rebounds for the Aggies, who got 13 points from reserve Shyla Lake, nine points from Emmie Harris and six assists from Faith Brantley.

This was SJSU’s first game since a big 56-48 triumph over Pac-12 program Cal in its season opener on Nov. 25. SJSU’s next four contests were canceled.