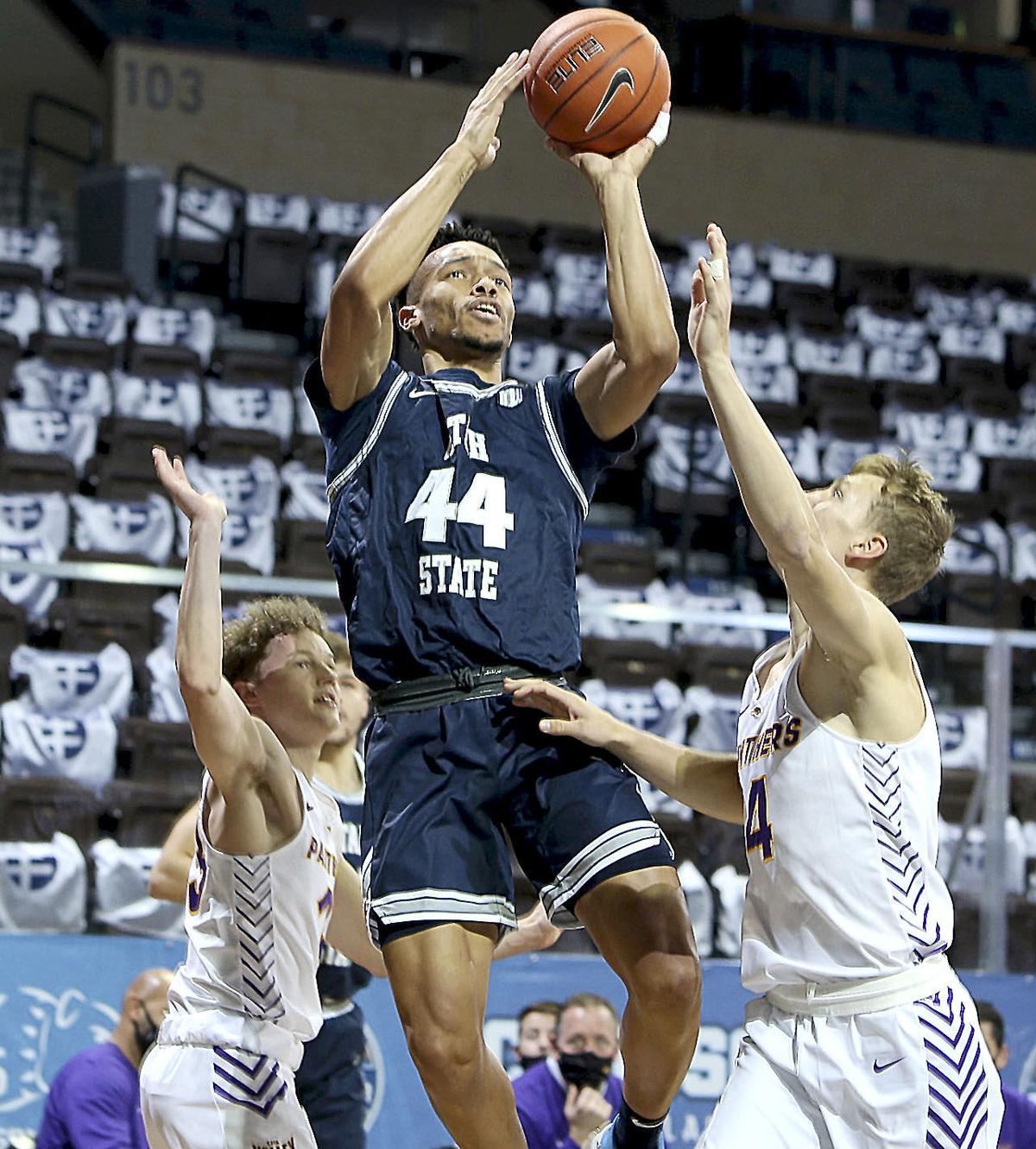 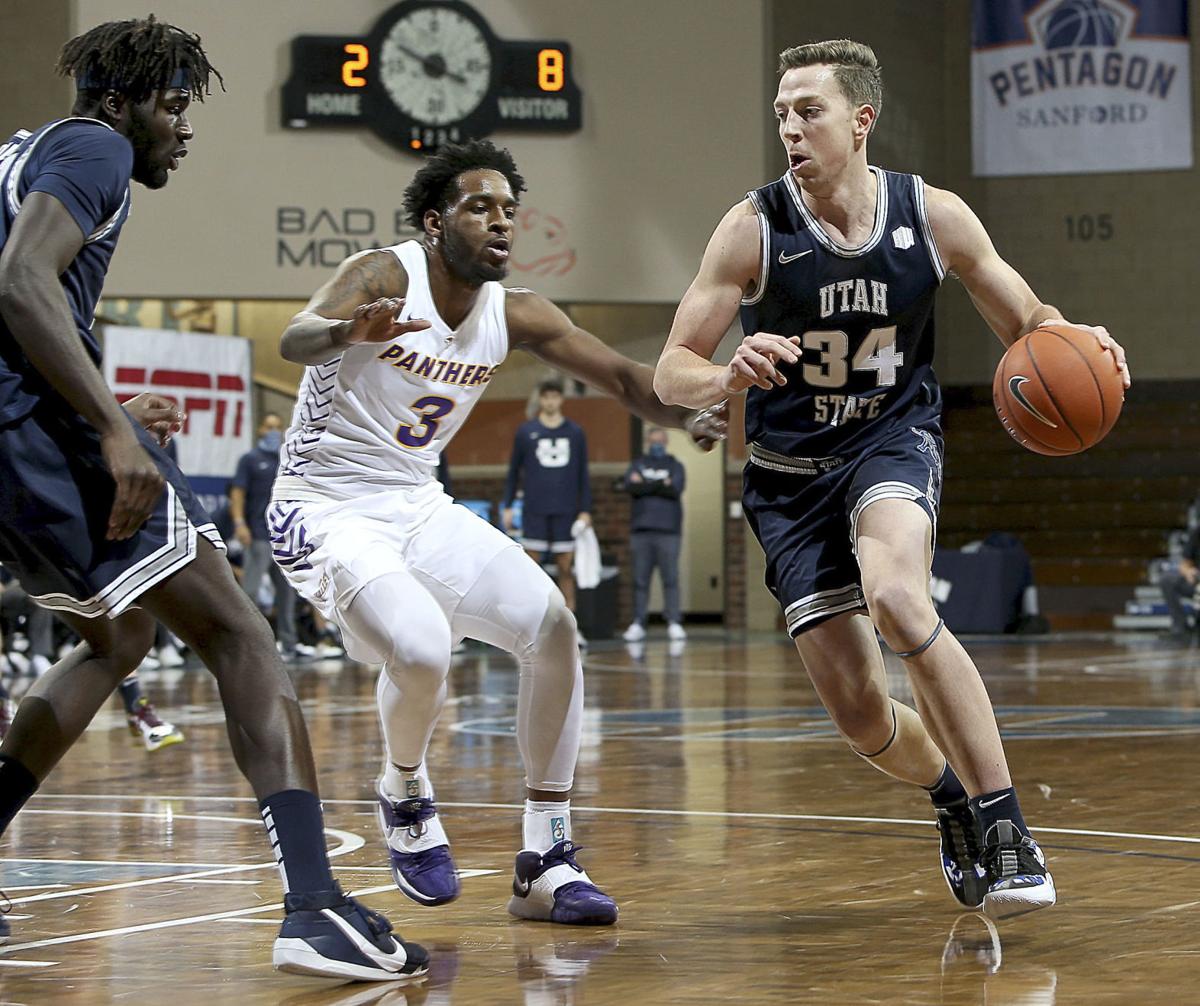 A strong second half was just what the Aggies needed Friday afternoon in the Sanford Pentagon.

The Utah State men’s basketball team avoided something that hasn’t happened in three decades — losing three straight to open a season. The Aggies overcame an eight-point deficit six minutes into the second half against Northern Iowa to record their first win of the season, 82-71. The two teams were playing the second game of the third and final day at the Bad Boy Mowers Crossover Classic at Sioux Falls, South Dakota.

“It was a great win for the Aggies,” USU head coach Craig Smith said. “Northern Iowa is a great basketball team. You play in a tournament like this with eight good basketball teams, you don’t want to start out 0-3. I thought we got back to playing Aggie basketball.”

The Panthers (0-3) tied the game with a pair of free throws, but would never be in front again.

Justin Bean capped a 10-2 run with a rebound bucket to give the Aggies a 67-59 lead with seven minutes to play. After a Northern Iowa bucket, USU reeled off six unanswered points for its first double-digit lead of the game, 73-61, with 3:04 left.

Over the final two minutes, the Aggies made 9 of 13 free throws to seal the victory.

“Ultimately, it came to getting stops on the defensive end,” Bean said. “We played with more pace and energy offensively and were way more aggressive than the last two games. All of that cultivated into us getting a win, and we are feeling really good about it.”

Playing the third game in three days, the Aggies showed up with lots of energy Friday.

“We haven’t been playing our style of basketball the last couple of days,” Bean said. “We lacked some energy, some grit and toughness. We made mistakes that we typically don’t. Part of that comes with having a new team.”

“Justin (Bean) was really good tonight,” Smith said. “... We were really balanced tonight. Obviously, we shortened our bench a little bit. I think that really helped us, and we played our veteran guys. I thought Marco Anthony had a great game, Rollie Worster as well.”

“We’ve learned a lot being here,” UNI head coach Ben Jacobson said. “I like what I have seen. It has been good competition and today was too against Utah State. … We want to win, but this was a good experience.”

The Panther coach got a little testy after the game when asked about losing three games to open the season. Northern Iowa was the preseason pick to win the Missouri Valley Conference. The Panthers let a 16-point lead against Saint Mary’s slip away in a 2-point loss Thursday and fell to Western Kentucky by six in their first game.

“We had chances,” Jacobson said. “... We’ve got to do a better job rebounding the basketball. Utah State gets offensive rebounds and puts it back in. No. 34 (Bean) puts it right back in. In those situations, we need to respond to that challenge.”

The Aggies got off to a 5-0 lead to start the game. USU built a 13-5 lead five-and-a-half minutes into the contest.

“Tonight we played on attack, played the way that we need to play,” Smith said. “... We were just on attack all night long.”

The Panthers heated up from 3-point range, draining back-to-back treys that sparked a 13-2 run. A third triple gave Northern Iowa a 18-15 lead at the 11:37 mark of the opening half.

“Northern Iowa is a high-octane offense, and AJ Green is one of the best players in the country,” Smith said. “... I knew they (Panthers) were capable of hitting threes.”

A Queta layup off a pass from Miller helped get the momentum back in the Aggies favor. Max Shulga drilled a 3-pointer, and USU was off to a 9-1 run, taking a 24-19 lead with 8:51 left before the break.

Once again the Panthers started bombing from long range, hitting three straight. Northern Iowa went on a 14-3 spurt to take a 37-32 lead late in the first half. USU did not score for nearly four minutes.

The Aggies hit 5 of 6 free throws and got a bucket from Bean to finish the first 20 minutes strong. The field goal by Bean was the first in nearly six minutes.

Then the Aggies went to work.

“I loved the mentality we played with and were able to finish the game,” Smith said. “... To our guys credit, (from) Justin, to Neemi, to Marco, Brock Miller, those veteran guys, to look at themselves in the mirror and self correct. … I needed to be better and put our guys in a better position to have success.”

The only drama in the final seconds was whether Bean would join Queta with getting a double-double. A missed 3-point shot by the Panthers with 20 seconds to play was grabbed by Bean for his 10th board.

Friday was a night note after two disappointing outings at the tournament to start the season.

The Aggies began on Wednesday with a 85-69 setback against VCU. USU held a 10-point lead in the second half only to see it disappear when the Rams reeled off 18 unanswered points. The Aggies went more than six minutes without scoring. VCU finished off the game with a 9-0 run.

“The last 14 minutes was a train wreck in every way, shape and form,” Smith said after the game. “We missed a lot point-blank shots and certainly we turned it over. We had 10 catastrophic turnovers that led to at least 20 points. I’ve got to do a better job for our guys.”

The Aggies were led by center Queta as he had his 15th career double-double with 17 points and a game-best 10 rebounds. Bean netted 13 points, while Worster added 10 points. Bean also had four rebounds and a team-high three assists. Miller and Sean Bairstow netted eight points each.

On Thanksgiving Day against South Dakota State, USU fell behind early when the Jackrabbits went on an 11-0 run. The Aggies never recovered, were behind 44-29 at halftime and ended up losing 83-59. SDSU made 15 3-point shots in the game.

“We were just in the wrong spots,” Smith said following the game. “Tonight it was a little bit of everything. … Good teams make you pay. They have a bunch of guys that are very, very confident and step into those rhythm shots. We’ve got to do a better job of guarding the ball. We have to be tougher on the ball.”

The Aggies starting lineup was the same as the first two games: Anthony, Worster, Miller, Bean and Queta. … USU is now 16-5 in tournament action under Smith. … The Aggies won the rebound battle for the third straight game, this time by a 43-33 margin. … USU went 23 of 31 from the free throw line, while UNI made 7 of 9 foul shots. Those were season highs for the Aggies. … For the first time this season USU had more assists (14) than turnovers (13). … Queta had three blocks, marking the seventh consecutive game, dating back to last year, that he has blocked a shot. … The Aggies lead the all-time series with the Panthers, 2-0.

Bean gets the nod. The junior recorded the 18th double-double of his career with 15 points and 10 rebounds. He was 6 of 12 from the field and 3 of 4 from the foul line. Bean also had a team-best four assists without a turnover and came up with one steal in 36 minutes of action.

There were no dunks by the Aggies against Northern Iowa. Season dunk count: Bean 2, Queta 1.

After three games in three days to begin the 2020-21 season, the Aggies will have a week to prepare for in-state rival BYU. The Cougars (2-0) visit the Dee Glen Smith Spectrum next Saturday.