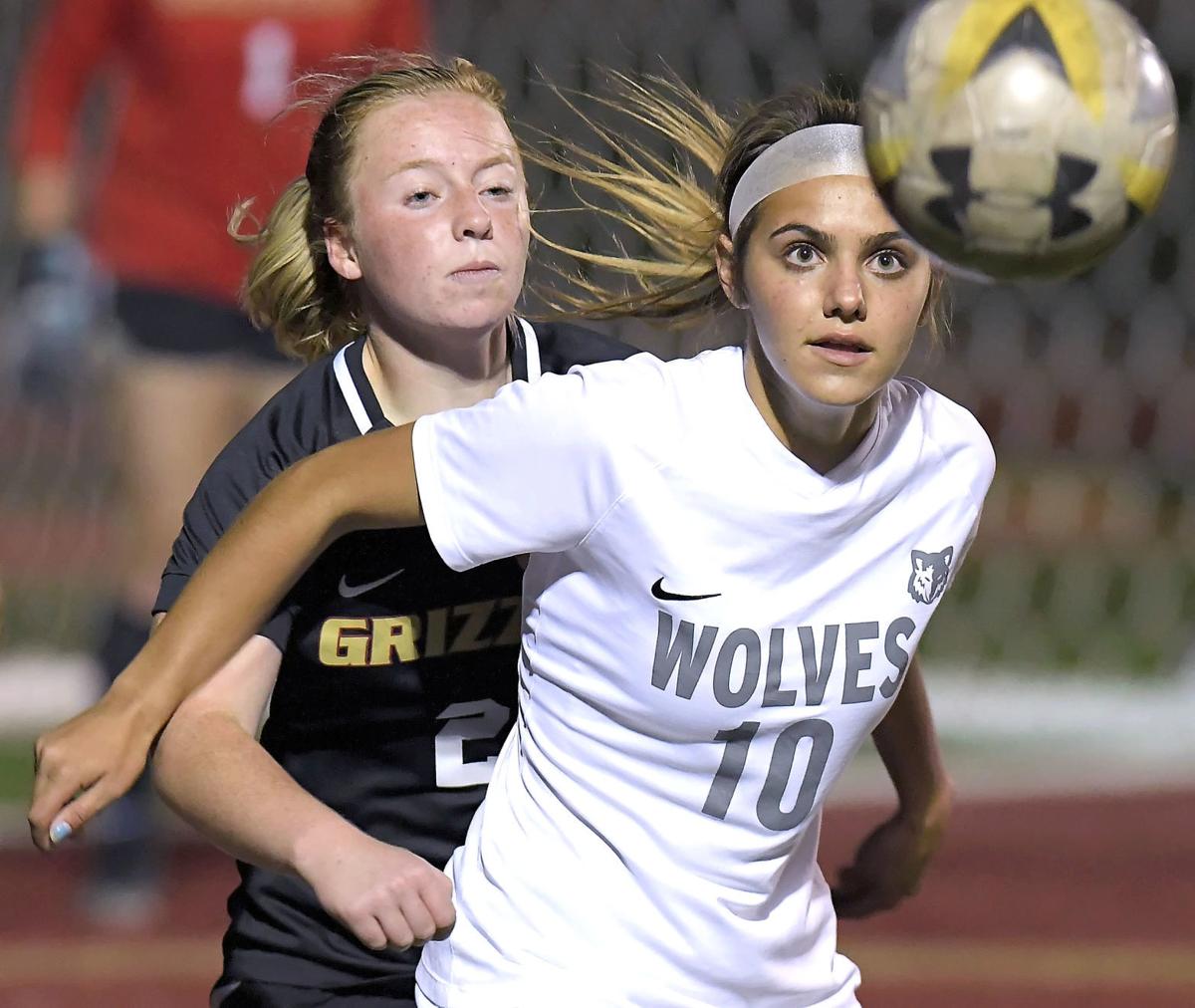 Green Canyon’s Kylie Olsen (10) fends off Logan’s Carlie Jenkins as she goes for the ball during their game last September. Olsen has signed to play for Utah State. 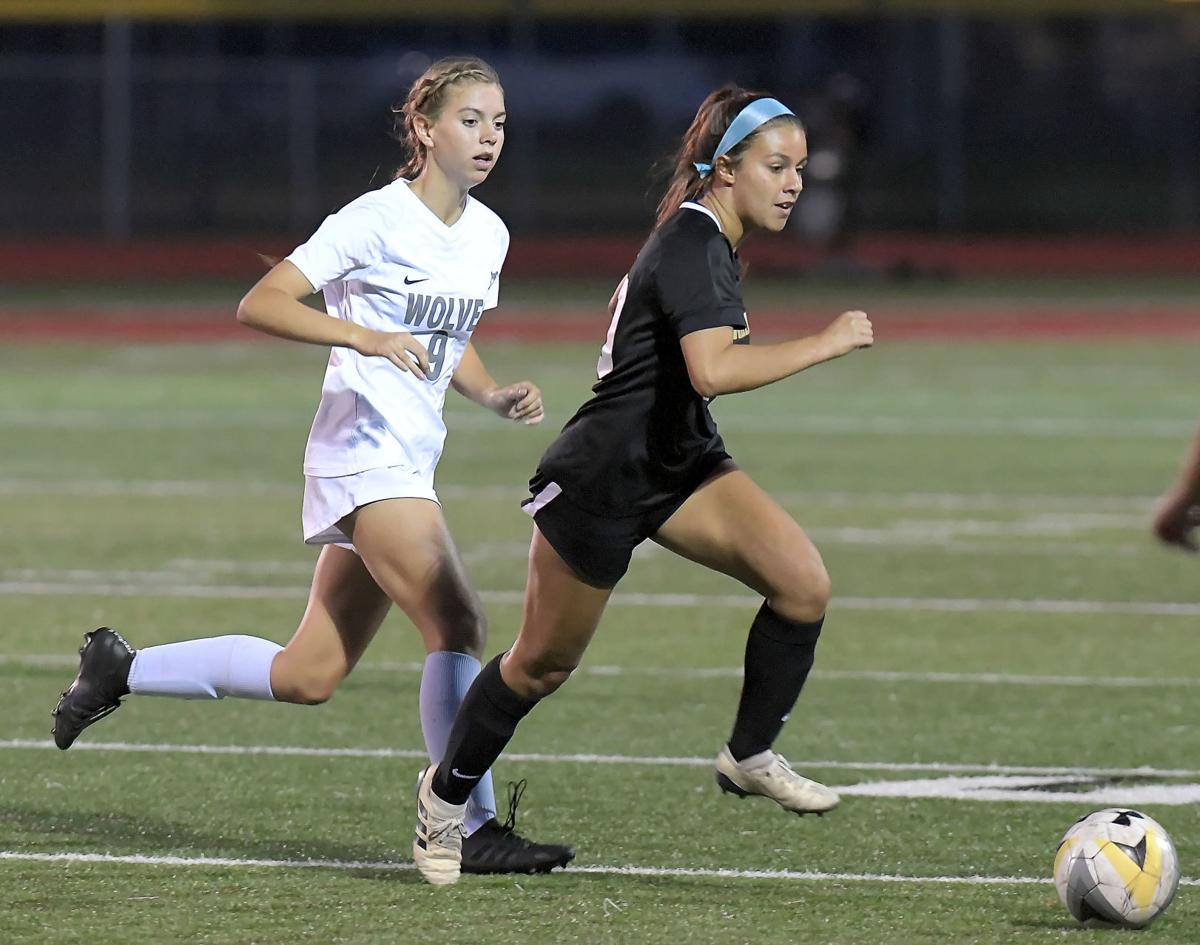 Logan’s Whitney Lopez, right, brings the ball down the field against Green Canyon last September. Lopez has signed to play for Utah State.

Green Canyon’s Kylie Olsen (10) fends off Logan’s Carlie Jenkins as she goes for the ball during their game last September. Olsen has signed to play for Utah State.

Logan’s Whitney Lopez, right, brings the ball down the field against Green Canyon last September. Lopez has signed to play for Utah State.

The Aggies have signed 10 athletes — all from Utah — as part of their most recent recruiting class, and three of them are Cache Valley natives. Green Canyon senior Kylie Olsen has finalized her commitment to USU, as have former Logan High teammates Whitney Lopez and Siu Pauni.

“I think it’s awesome because we already have team chemistry because (a lot of us have) worked with each other growing up, and it just (makes a big difference) jumping into a program,” Pauni said. “It’s just nice to have those teammates like you that you can already trust and already know.”

Pauni has three years of eligibility remaining as she spent the previous two seasons at Salt Lake Community College, where she redshirted in the fall of 2018. The Logan native was SLCC’s starting goalkeeper for most of the 2019 campaign, and she shined for a Bruin side that went 12-1-1, including 9-0-1 in conference play.

The daughter of Roxanne and Lopi Pauni went 8-1-0 as the starting keeper and only conceded 10 goals, while posting a goals against average of 0.90. Pauni played more than 1,000 minutes and made 26 saves.

“We’ve always been super close from the first year that we played with each other,” said Pauni, who caught the attention of USU’s coaching staff when the Aggies played the Bruins in an exhibition match during the spring of 2019. “We were more like best friends. ... I mean, we were both battling for the starting position, but we were both so supportive of each other and whoever started, we were supportive of them. And so we had a really good relationship.”

Jess Evanson, a former Sky View and Utah Valley University standout player, coached Pauni at SLCC, and will continue to mentor the sophomore. Evanson, who was an assistant coach for the SLCC men’s and women’s programs, was hired as a Utah State assistant last December.

Pauni is ecstatic Evanson will continue coaching her.

“She’s been a great coach,” said Pauni, who grew up in a house less than a mile away from USU’s Bell Field. “I’ve loved her and she’s helped me a ton, so having her come with me to USU has been great. She’s just helped me improve a lot more and she’s helped me with the transition to feel more comfortable. I can go to her for anything, so it’s been awesome having her (in my life).”

Pauni said the opportunity to compete for USU “is a dream” because she can play in front of family and friends.

As a senior at Logan High, Pauni earned first-team all-region and second-team all-state honors. She recorded 10 shutouts and didn’t allow a goal in regulation or overtime during the Grizzlies’ final 443 minutes of the 2017 season. Logan was eliminated from the quarterfinals of the 4A state tournament in a penalty shootout.

“Siu is an experienced goalkeeper,” USU head coach Heather Cairns said in a press release. “She possesses a great mix of technical ability and athleticism that makes her tough to beat.”

Pauni played with Lopez, an incoming freshman, at Logan in 2016 and 2017. Lopez, a four-year starter for the Grizzlies, was recruited by the Aggies at the very beginning of her prep career and pledged her commitment to the program in the winter of 2017.

“When I went on the unofficial visit for Utah State, it felt right, it felt good being there,” Lopez said.

The star midfielder honored her nearly three-year-long commitment by signing with the Aggies last November. Her older sister, Demi, played collegiately at the University of Utah.

“Well, I love that it’s home pretty much,” Lopez said. “I like that it is close to my parents and I love the team. I know a girl that played for my older sister’s (club) team that’s going to be a senior when I’m a freshman. Her name’s Ashley Cardozo and she really inspires me. I like watching her play. I’ve always loved watching her play, and I just knew USU was a really good school, school wise and not just soccer.”

The daughter of Ann and Erik Lopez missed the first half of her final prep season while recovering from a knee injury. The Grizzlies went 2-7-0 without Lopez in the lineup and 6-3-0 with the help of No. 10. In those nine games, the Logan native scored five goals and dished out seven assists en route to garnering honorable mention all-state accolades.

Lopez contributed with three goals and 10 assists as a junior and finished second on the team with six goals as a freshman. Lopez suffered a season-ending injury in the second preseason match of her sophomore season.

“Whitney is an impactful box-to-box midfielder,” Cairns said. “She will bring great vision and an ability to dictate our rhythm of play.”

Three of Lopez’s La Roca teammates are part of USU’s 2020 recruiting class in Olsen, Ogden High’s Alysia Butters and Weber High’s Adree Johnson. Ridgeline star London Miller, who has signed with UVU, also competes on that La Roca team. Lopez is excited to be reunited with her club teammates.

“I like it a lot because I know all of the girls that are coming and I know how competitive and good they are, so it’s going to be an easy transition, especially since a lot of them are my (club) teammates, so they’ve always pushed me during the past years,” said Lopez, who helped propel Logan to a pair of region titles and a spot in the 2016 3A state championship match. “And it will be nice to be pushed even more from other players that I know I’ve played against.”

Likewise, Olsen is looking forward to playing with her club teammates at Utah State and is hopeful the current club season will eventually resume. The Utah State Cup Championships are scheduled for May, with regionals scheduled in June and nationals in July.

“I’m so excited,” Olsen said of being reunited with her club teammates at USU. “We’ve all talked about it a bunch and we’re just so ready to come in together and keep our style of play together, since we know exactly how to play with each other.”

Olsen is hungry for another shot at a club national championship. Her La Roca side was 30 seconds away from achieving this goal two summers ago, but it conceded a goal in the final minute of regulation and eventually lost in overtime.

The Logan native excelled as a center midfielder and forward during her three seasons at Green Canyon, but was recruited by USU as an outside back. Olsen splits time as a midfielder and defender for her club team.

“Kylie is an accomplished and fierce defender,” Cairns said. “She will frustrate the best attackers with her ability to limit their time and space.”

Olsen was first recruited by the Aggies in the summer before her sophomore season. Two other Division I programs, Colorado State and San Diego, also caught the attention of Olsen, “but they both just didn’t work out as well as Utah State did for me.” She verbally committed to USU at the end of her sophomore year.

Olsen sparkled for the Wolves as a senior as she racked up 17 goals and 10 assists en route to earning first-team all-state honors. No. 10 ranked second among all local players in goals and helped lift Green Canyon to a 13-3-2 record and trip to the 4A state semifinals.

The three-year starter netted five goals as a junior and contributed with 13 goals and four assists as a sophomore. The Wolves went from scoring 17 goals in 2018 to 56 a year later, and Olsen thoroughly enjoyed helping build a program that was brand new when she arrived.

“It was honestly one of the best experiences of my life so far,” Olsen said. “It was such a transition from La Roca to high school. It was totally different, especially playing different positions and everything. And it was so fun just knowing right when I came (to Green Canyon) the team and everyone was new and everyone was new to the school, so we had something to really build from. And so to see it all come together and by my senior year we went really far and had a really good season, and it was just fun to build from something that was originally nothing to a solid program.”

Olsen’s Green Canyon and La Roca teammate, Brooke Watkins, has verbally committed to the Aggies, as has Logan’s Bizzy Arevalo. Watkins and Arevalo are both juniors.