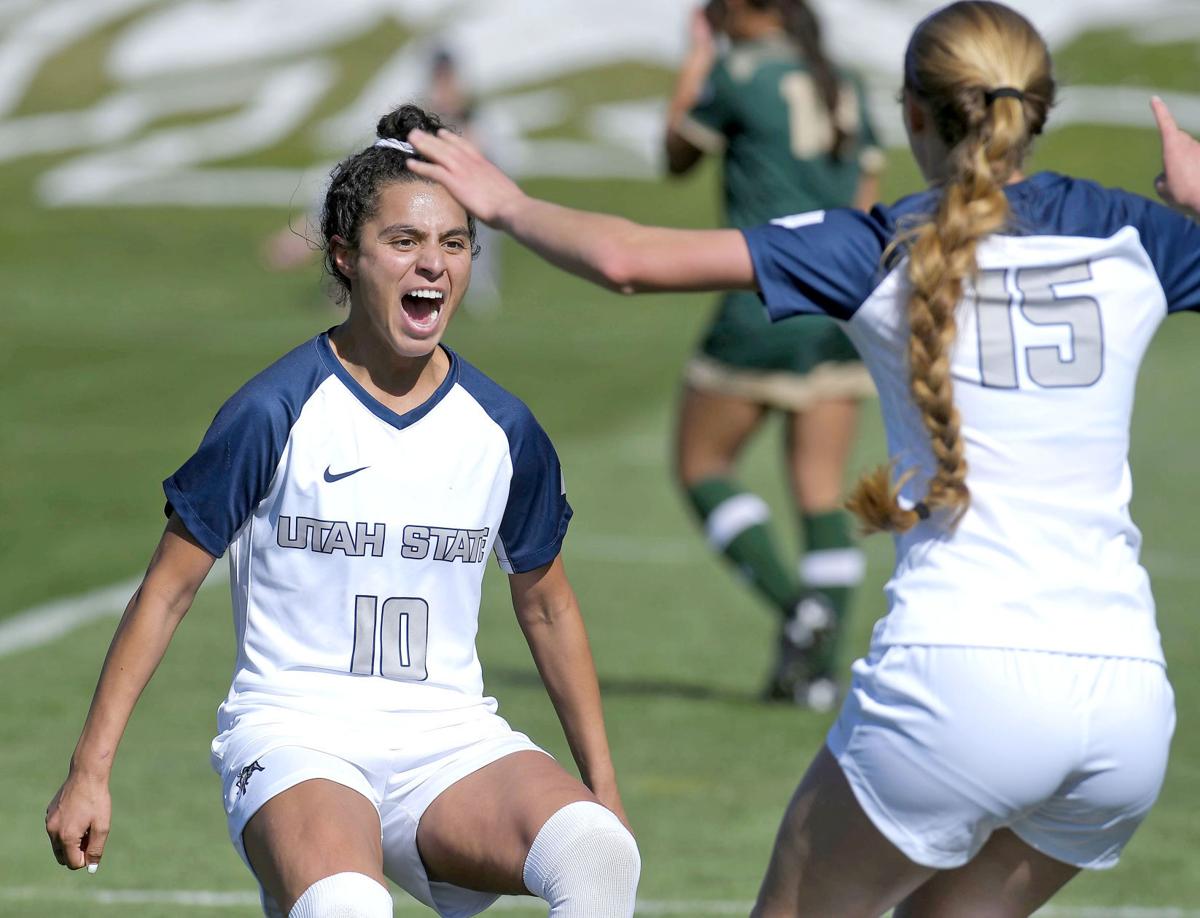 Utah State’s Ashley Cardozo (10) celebrates with Kami Warner after scoring a goal against Colorado State on Friday in Logan. 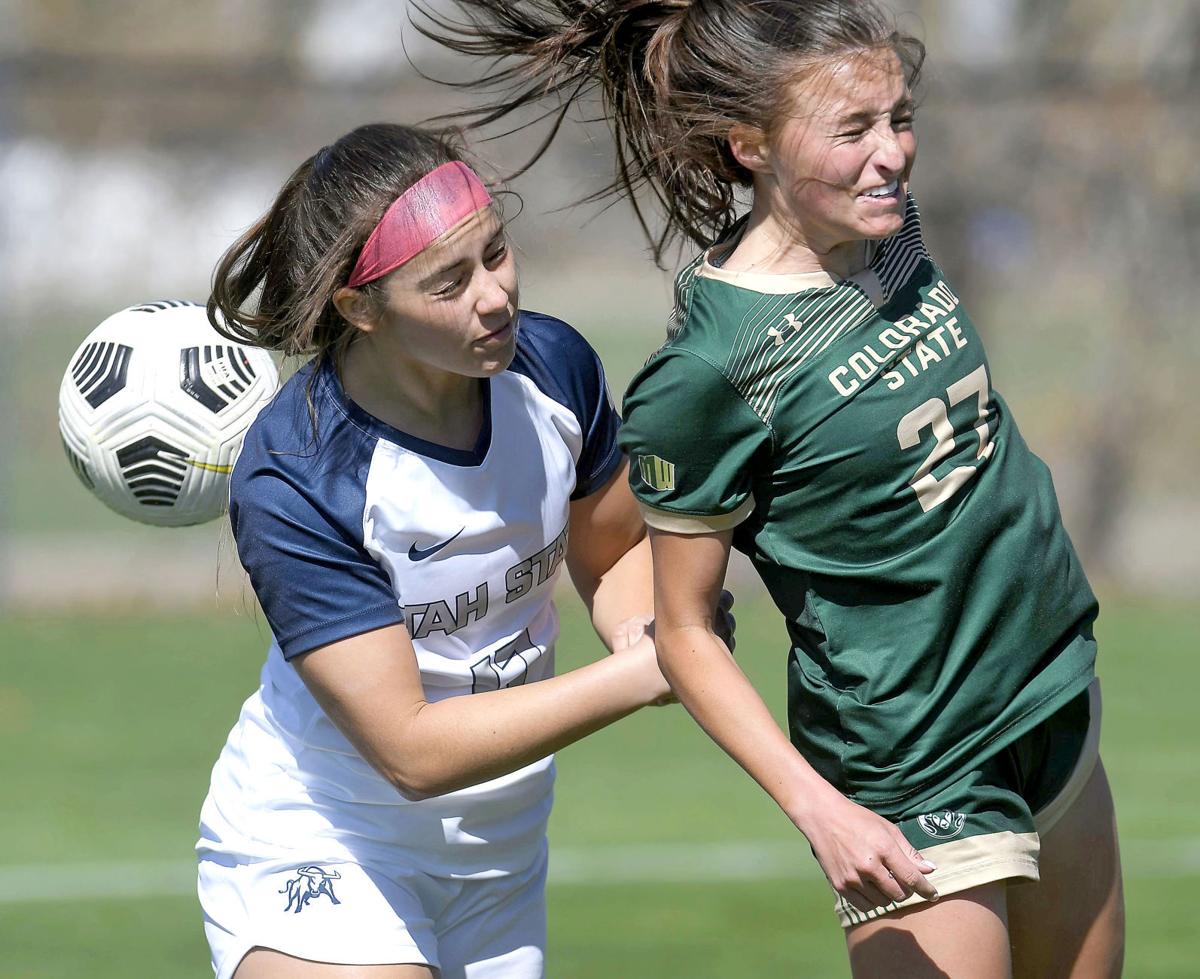 Utah State’s Ashley Cardozo (10) celebrates with Kami Warner after scoring a goal against Colorado State on Friday in Logan.

It was a rough start to an abbreviated soccer season for the Aggies, but they’ve gamely persevered through the early disappointments and are certainly finishing with a bang.

Star midfielder Ashley Cardozo recorded a brace and Utah State extended its unbeaten streak to four with a hard-fought 2-1 victory over Colorado State on a sunny Friday afternoon at Chuck & Gloria Bell Field. The Aggies lost their first three matches this spring, but have bounced back by only conceding two goals during their last four Mountain West showdowns.

In the process, USU exacted revenge against CSU, which overcame a 1-0 halftime deficit in its 2-1 triumph over the Aggies at home on March 7.

“We’ve gotten better every game and we’re so proud as a group of our resilience and just that ability to get better day in and day out,” USU head coach Heather Cairns said. “... I think we’re on an upward slope and we’re excited to have Colorado State and Wyoming (again) because we felt like we didn’t play our best those first two games, so to end with them and be able to redeem ourselves and show really what our program is about, we’re really excited about that.”

It was the Aggies’ first match at Bell Field since 2019 as their first three home games this season were contested at the RSL indoor facility in North Logan.

“It’s fantastic to be back at the Bell,” Cairns said. “We’ve waited so long for this and ... you could (sense) the excitement. The fans were fantastic. I think at times we played really well, at times we made things a little hard on ourselves, but in the end we competed until the very last minute and got the W.”

It didn’t take the Aggies (4-4-1, 4-4-1 MW) long to give their fans something to cheer about as they dented the scoreboard in the seventh minute. Mendon native Marli Niederhauser tracked down a well-weighted through ball from Kami Warner and was taken down in the 18-yard box. Cardozo buried the resulting penalty kick.

Cardozo had a golden opportunity to double USU’s lead about 11 minutes later, but she rocked a shot just outside the 6-yard box right to CSU goalkeeper Amelia Hammerle. Those were the only legitimate scoring chances in the first half as the two sides only combined for six shots.

The Rams equalized less than 10 minutes into the second half on a Taylor Steinke penalty kick. USU standout keeper Diera Walton had to make four saves after halftime, but all of them were routine, plus Walton did a great job of snaring potentially dangerous balls and commanding her box.

It was another strong performance in the run of play from USU’s backline, which is anchored by veteran Imelda Williams and freshman Kelsey Steed. Steed and Walton are the only Aggies to play every minute of every match so far this season.

“To be completely honest, I didn’t come in thinking I’d play every minute,” Steed said. “I kind of committed late, so I wasn’t expecting a ton, but I worked hard every practice, I worked my tail off and I’m really happy with how I’ve been doing. I think there’s still a lot of improvement (to be made), but I’ve felt pretty good about this season.”

USU’s second-half breakthrough in the attack took place at the 67:42 mark, and it was a sublime build-up and goal. Taylor Garza-Freeman slotted a perfect ball into space to Warner, whose pinpoint cross was volleyed in by Cardozo.

“It’s so fun, especially now toward the end of the season, I feel like we’re starting to show who we are ... as a team, and it’s just so exciting to put it all together, especially winning like that,” said Cardozo, who is the program’s all-time leader in assists with 20. “It feels so good ... and I commend the whole team so much for all of their hard work in getting (us back to) the Aggie way.”

Green Canyon product Kylie Olsen had two good chances to net an insurance goal — the second on a shot well inside the 18 — and the hosts did a great job of killing the match in the final few minutes.

Up next for Utah State is its home and regular season finale Sunday against Wyoming. The Cowgirls edged the Aggies 1-0 on March 5 in the opener for both teams. Opening kickoff from Bell Field is scheduled for noon.

In addition to Niederhauser and Olsen, there are four other Cache Valley natives on USU’s roster. Freshman midfielder Whitney Lopez (Logan High) is a starter, along with Niederhauser, a junior who prepped at Mountain Crest and Ridgeline.

Niederhauser is one of four Aggies who have netted two goals this season — one behind leader Cardozo — and Lopez is currently second on the team with two assists. Cardozo and Warner have been credited with three assists apiece.