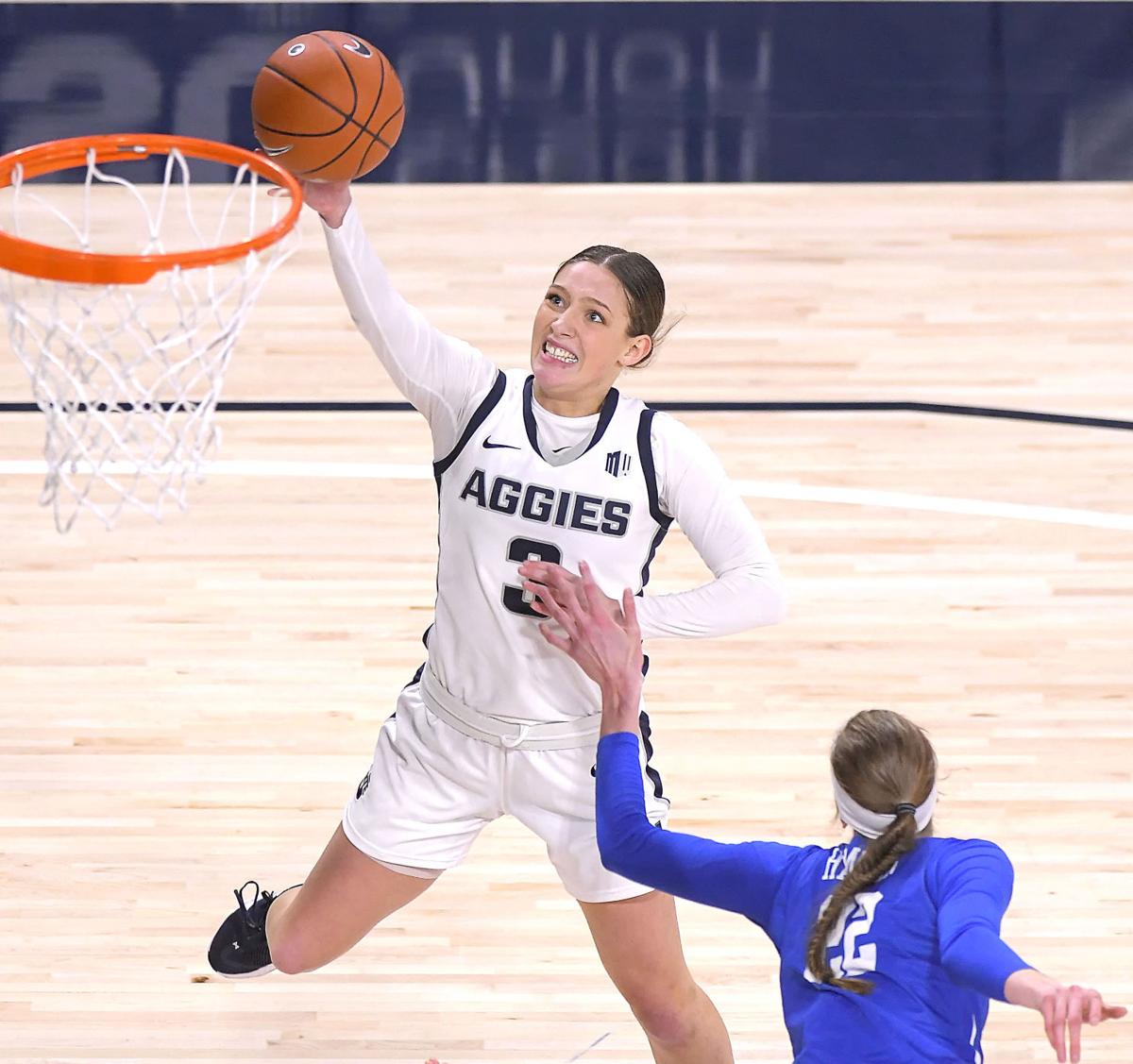 Utah State’s Elli Emrich (3) takes shot as BYU’s Sara Hamson (22) defends during the first half on Monday in Logan. 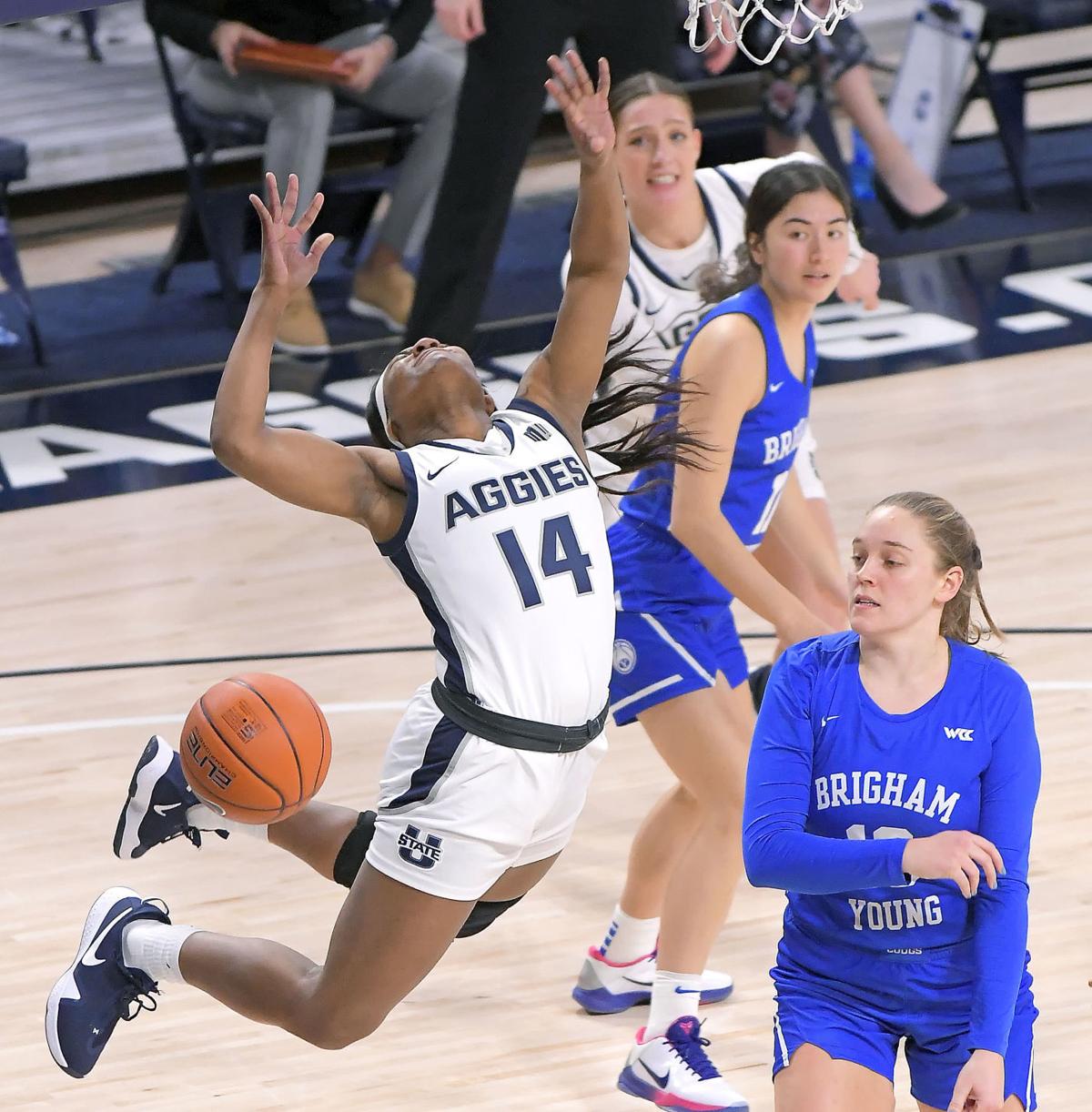 Utah State’s Monique Pruitt (14) gets fouled by BYU’s Tegan Graham in the second half on Monday in Logan.

Utah State’s Elli Emrich (3) takes shot as BYU’s Sara Hamson (22) defends during the first half on Monday in Logan.

Utah State’s Monique Pruitt (14) gets fouled by BYU’s Tegan Graham in the second half on Monday in Logan.

Starting a game with a turnover and then giving up seven straight points is never a recipe for success.

The Utah State women’s basketball team found itself behind right out of the gates and could never recover, though the Aggies did make it interesting in the third quarter. Visiting BYU kept going on runs and never really looked back in notching a 87-66 win in front of 425 fans Tuesday night in the Dee Glen Smith Spectrum.

The Cougars (2-1) last played more than a week ago, suffering a 77-48 loss to Washington in Las Vegas. BYU didn’t look to have any hangover from that setback as it never trailed in the game. The Cougars shot 48.6 percent from the field and made 13 of 17 foul shots.

The Aggies (1-3) suffered their third straight setback. USU shot 37.3 percent from the field. The Cougars outscored the Aggies in the paint, 56-30.

“I was really disappointed in our defensive effort tonight, giving up 17 second-chance points and 56 points in the paint,” Ard said. “That is literally a key for us. We have to win the paint, and it wasn’t even close. They (Cougars) got wide open layups. Defense and boxing out is an effort thing.”

The Cougars were led by Shaylee Gonzales with a game-best 27 points, four rebounds, three assists and four steals. Lauren Gustin had a double-double with 21 points and a game-best 17 rebounds. Paisley Johnson Harding netted 14 points.

After jumping out to the 7-0 lead, the Cougars just kept adding to their lead. It didn’t help the Aggies’ cause that they had seven turnovers in the opening quarter. BYU took a 22-10 lead into the second period.

“It just looked like we were defeated most of the first half,” Ard said. “I’m just disappointed in our effort in the first half. … We dug ourselves way too deep of a hole to get out of.”

Elli Emrich grabbed an offensive board and scored to start the second quarter off on a good note for the hosts. Chatman scored five unanswered points to pull the hosts within 26-17 with 6:50 left in the first half. The Aggies would get no closer.

Five different Cougars scored during a 14-3 run by BYU to end the first half. USU did not score over the last 4:30 of the second quarter. The Cougars took a 42-24 lead into the break.

BYU scored the first bucket of the second half. After a layup by USU’s Faith Brantley, the Cougars scored five quick points for their largest lead of the game, 49-26. Albiero hit a 3-pointer to give BYU the 23-point lead.

“It was a big third quarter for us, but that’s how we are supposed to be playing, that’s how we practice every day,” Ard said. “That’s what it’s supposed to look like. I told the team after the game there are glimpses of what we are going to look like in the future. The glimpses are positive, but I’m disappointed we can’t put that together for 40 minutes or even for 30 minutes.”

BYU then proceeded to score six points to end the quarter for a 65-52 lead. The Cougars netted the first four points of the fourth and, midway through the final period, went on a 10-3 run to leave no doubt in the outcome.

“Hopefully we can take that glimpse of what we saw in the third quarter and turn that Utah State women’s basketball,” Ard said. “That’s what we are supposed to look like. … We ran out of whatever juice we had in the third to start the fourth. It’s all part of the process. I’m still trying to figure out rotations.”

The Aggies remain at home for their next contest, hosting UTEP on Sunday at 2 p.m.

“It was nice to have fans and to experience Aggie Nation,” Ard said. “We gave them something to cheer about in the third quarter. They seemed to like that. I appreciate everybody that came out to support us tonight. I hope they will be patient with us and stick behind us while we get this thing turned around.”