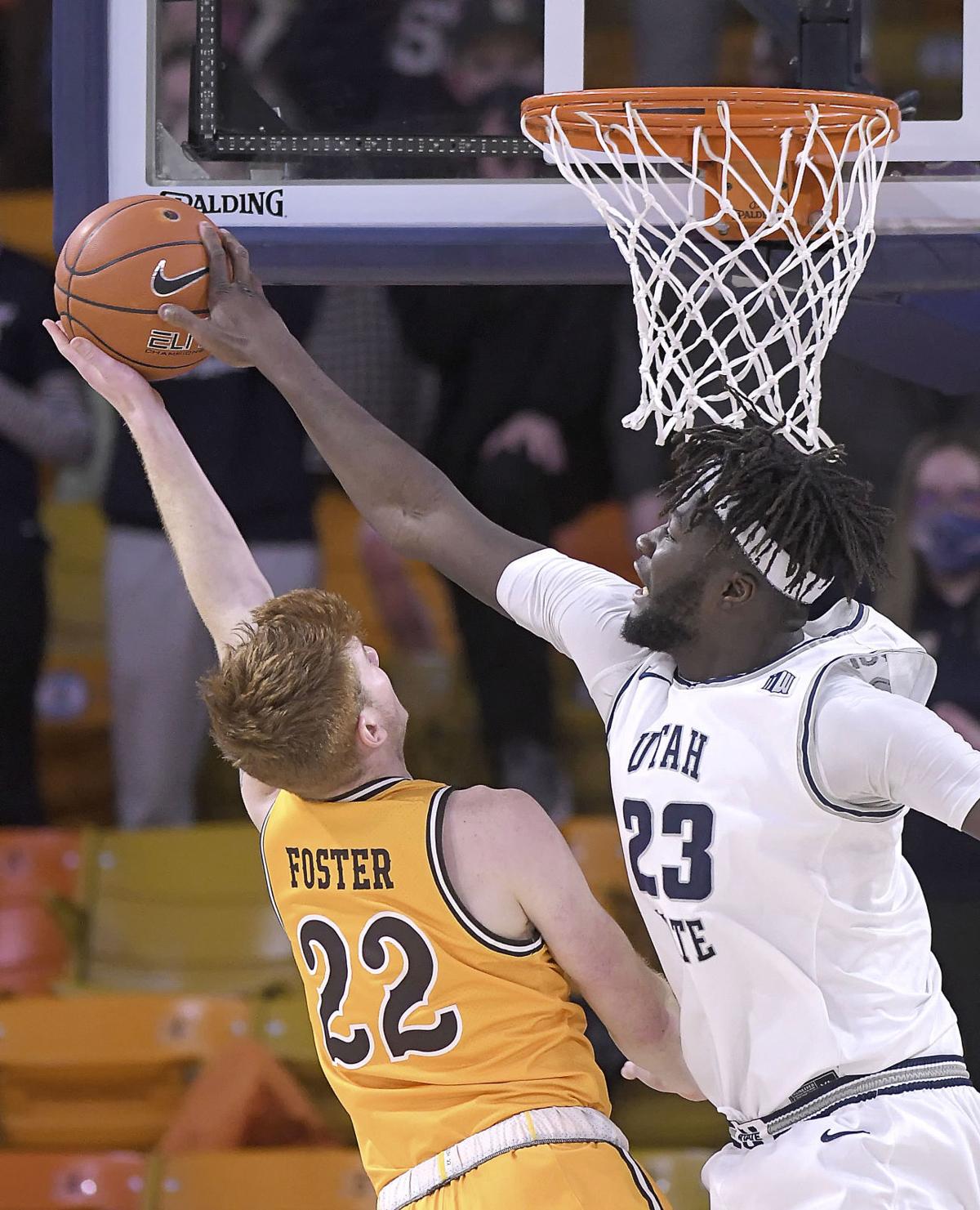 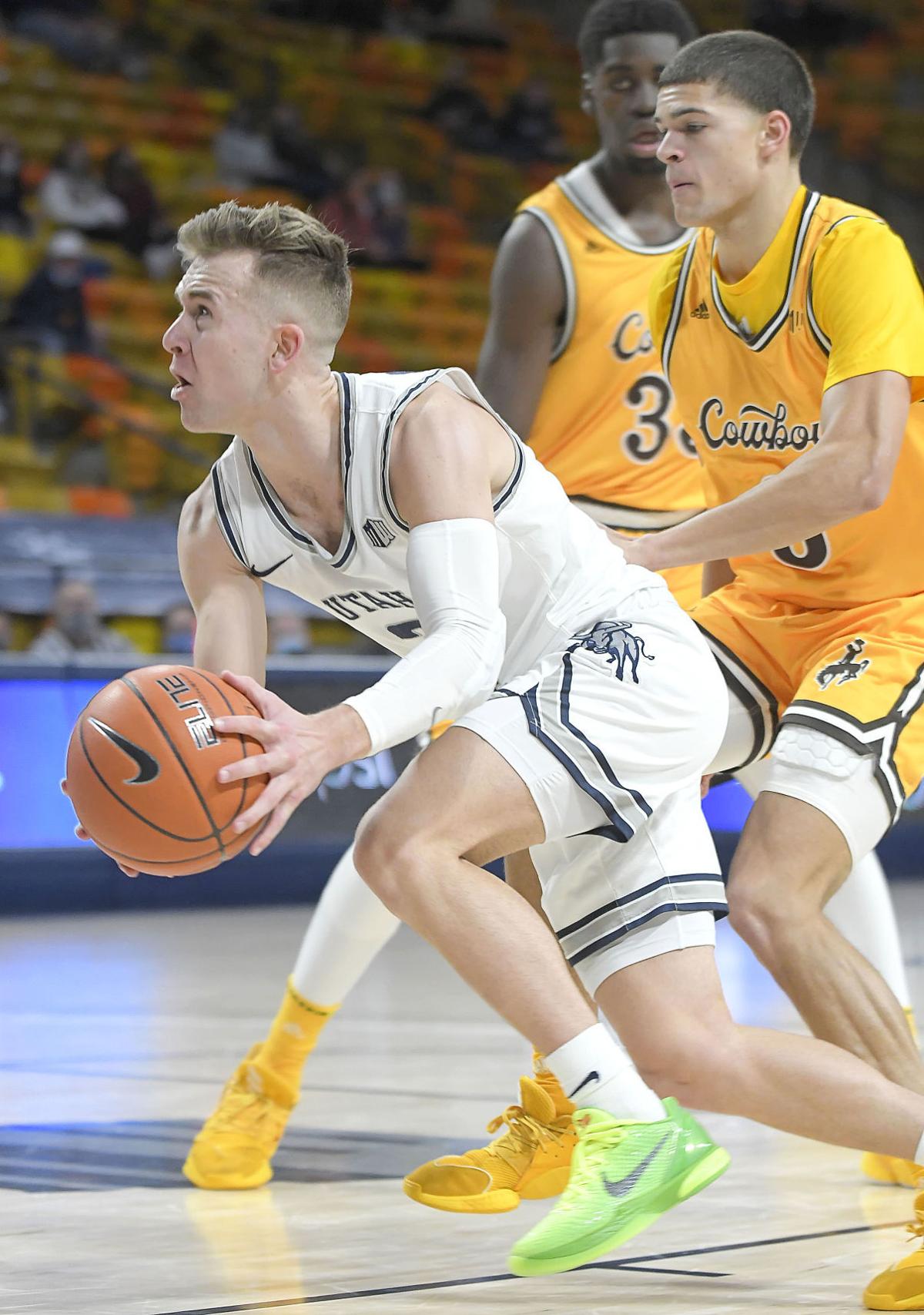 Wyoming came out and dared Utah State to shoot open shots from 3-point range early in the game Thursday night.

The Aggies could not take advantage of those open looks. In fact, USU missed the first 10 shots from long range in the final home game of the regular season. Steven Ashworth came off the bench to swish the first trey of the game for the Aggie men’s basketball team 12 minutes into the game.

“The way they were defending us, basically (Justin) Bean was wide open,” Ashworth said. “We drew up a few plays for me to come off screens with Bean setting it, which means there wouldn’t be a help defender because they were sinking in on Neemi (Queta). I had the mindset that I needed to attack off that screen. I ended up open behind the 3-point line and took it.”

The Ashworth 3-pointer was part of a 12-3 surge by the Aggies that helped them overcome a 19-12 deficit. A dunk by Neemias Queta — his first points of the game — off a pass from Sean Bairstow at the 5:57 mark of the opening half gave the hosts a 24-22 lead. They would not trail again.

USU went on to pick up and important Mountain West Conference win against the Cowboys, 72-59. It kept the Aggies (17-7, 14-4 MW) in contention to finish second in the league.

“It seems like everything has been different this season,” USU head coach Craig Smith said. “Our guys knew this was going to be the last time they were going to be able to play in the Spectrum this year. Our guys love playing here. ... There is a lot on the line right now. We can still get the two seed.”

The Aggies ended up making 6 of 20 3-point shots, so they were better much better after missing the first 10. As a team, they shot 45.5 percent from the field for the game. USU also shared the ball — 20 assists as seven different players had at least two dimes.

“No matter who is open on this team, we want you to shoot it if you are open,” said Ashworth, who finished with 13 points and three assists. “You could see that with Max Shulga stepping up and hitting two huge threes in the second half. That gave us some momentum. ... I think later in the game they (Cowboys) realized they couldn’t leave shooters wide open any more, which allowed Neemi to get going and have some big buckets down the stretch.”

Did the Aggies feel disrespected with the way the Cowboys (12-10, 6-9) were leaving some guys wide open?

“To be brutally honest, I think it messed with us a little to start the game,” Ashworth said. “We were together as a team and wanted to be aggressive and whoever was open, we wanted them to shoot and attack. I don’t think it’s disrespect. I think they thought it might work. Give them credit. It was great to overcome that as a team.”

Bean finished with a career-high 20 field goal attempts and a career-best 10 made shots. The junior had a game-high 21 points and also grabbed 10 rebounds for his seventh double-double of the season.

“After the game I glanced at the box score and saw Bean had 21 points and then, wow, he had 20 shots,” Smith said. “That’s a good thing. His game has really evolved. It helps us when he shoots. ... Our guys believe in him. He works so hard at his game.”

Queta had four points at halftime, but had a monster second half as he finished with 14 points, 13 rebounds and blocked five shots. It was his 12th double-double of this current campaign.

“We had to adjust to what they (Cowboys) threw at us,” Queta said. “I feel like we finished the game well. We did what we had to do to win. ... We did a way better job in the second half of attacking and dominating. We also settled down and hit shots.”

Once again Aggie guard Marco Anthony shut down a high scorer on the defensive end. Thursday night he was mostly on Cowboy Marcus Williams, who came into the game leading his team with 15.9 points a game and 4.1 assists. Williams finished with four points and two assists, while shooting 2 of 8 from the field and was 0 of 3 from long range.

“He (Anthony) has had a very good year,” Smith said. “Marco is a very good player. Almost every game he guards the leading scorer. He takes great pride in that. When he plays like that, he effects the game in so many ways. ... The last three games he has taken it to a different level. That is exciting to see.”

Utah State dropped a spot to No. 48 in the NET rankings after the win, while Wyoming remained at No. 185. … The Aggies won the rebound battle, 42-33, for the 24th straight game this season. … The nine turnovers by the Aggies tied for the fewest in a game this season. … Junior guard Brock Miller had started in a team-best 92 games before missing Thursday’s contest with a back injury. He had also started in each of his last 23 games, which was third-best on the team. … Queta now has 26 double-doubles and is tied with Ed Gregg for the ninth most in school history. He is also tied with Mike Santos for the fifth-most double-digit rebound games in school history. Queta is also closing in on the MW record for blocks during league play as he has 133 after Thursday, just five shy of the record held by San Diego State’s Skylar Spencer (138). … Bean now has 24 double-doubles, which is the 11th most in school history. His 34 career double-digit rebound games rank fourth in school history. … Shulga finished with a career-high eight points. ... The Cowboys still lead the all-time series with the Aggies, 50-33.

Even though he fouled out late in the game, Queta gets the ball. The junior recorded his fifth straight double-double and 12th of the season with 14 points and a game-best 13 rebounds. He was 7 of 10 from the field. Queta also blocked five shots, dished out two assists and came up with a steal in 31 minutes of action.

Less than five minutes into the second half, Bean softly flushed one off a pass from Anthony. Queta then took a pass from Anderson, backed in and threw it down at the 14:20 mark.