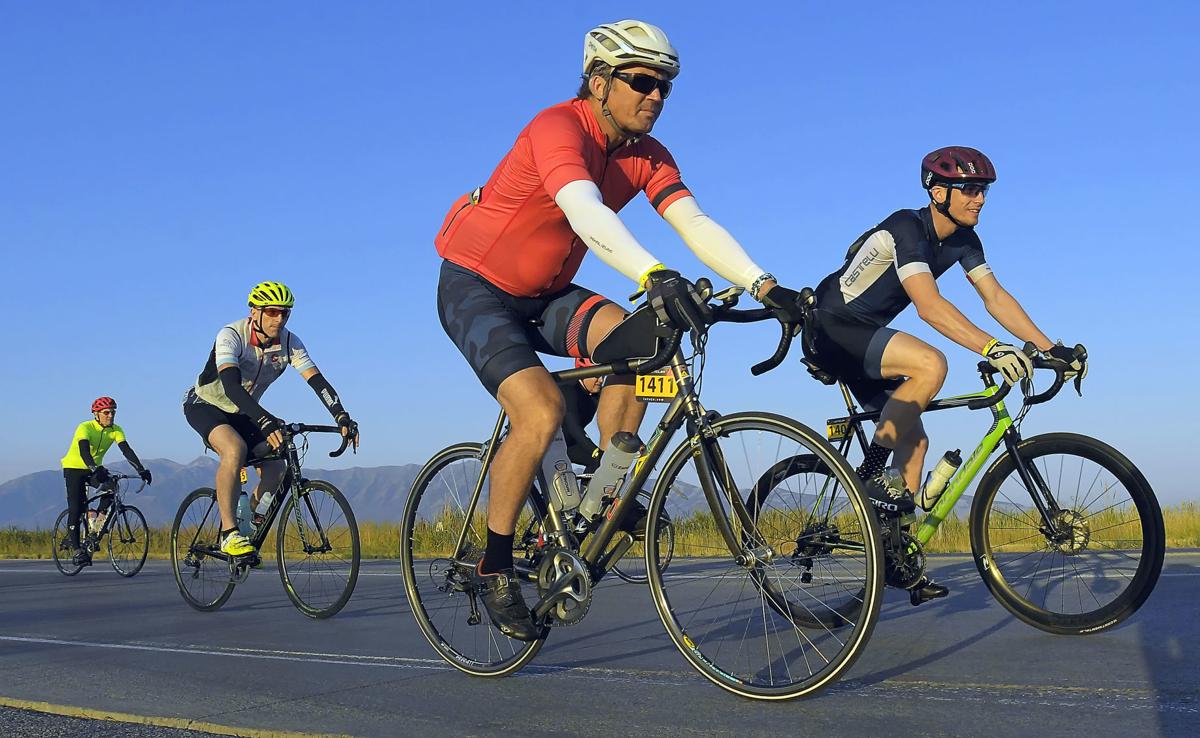 Rider compete in the LoToJa bike race as it goes through Logan last Saturday morning. 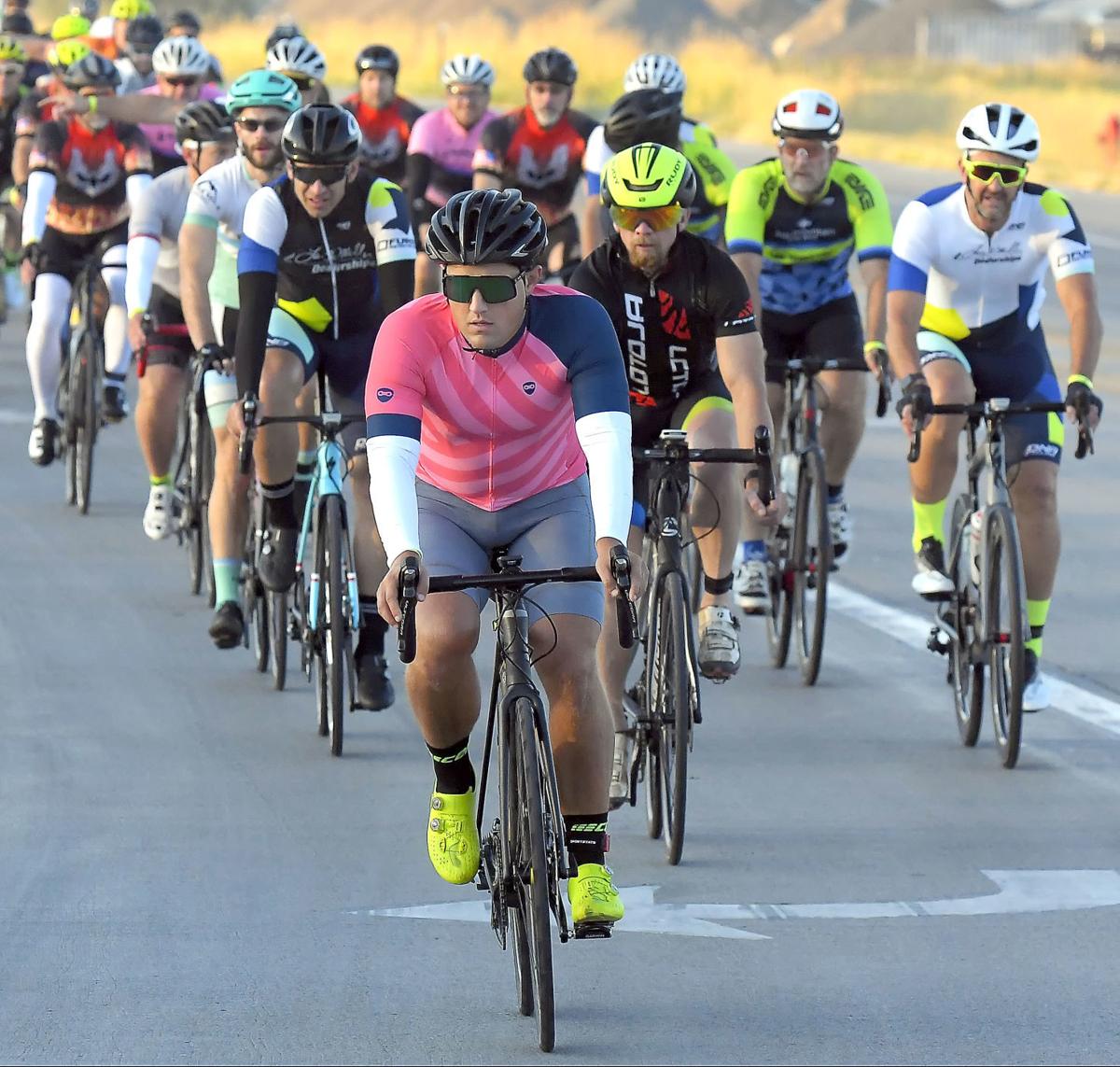 Rider compete in the LoToJa bike race as it goes through Logan on Saturday morning.

Rider compete in the LoToJa bike race as it goes through Logan last Saturday morning.

Rider compete in the LoToJa bike race as it goes through Logan on Saturday morning.

There was no course record this year.

With the fastest time in the LoToJa Classic being lowered in 2017 and again in 2018, some thought it might happen again last Saturday in the 2019 installment. However, the 37th annual LoToJa cycling race that starts in Logan and finishes in Jackson, Wyoming, did not produce another record.

A strong headwind on several of the mountain climbs and a crosswind in Star Valley prevented anyone from lowering the overall record of 8 hours, 18 minutes and 29 seconds. The women’s record of 9:35:00 was also safe. However, the top women were closer to their record than the men.

Roger Arnell was the overall winner, riding the 207-mile course in 8:45:51. The Pro Cat 123 rider from Farmington edged another Pro Cat 123 rider by three seconds in a sprint finish. Gilberto Melendez of Tucson, Arizona, was second. Last year’s winner and course record holder Spencer Johnson of Riverton was third in 8:47:59.

On the women’s side, Alison Tetrick of Petaluma, California, was first in 9:42:07. She rides in the Pro Cat 123. A couple of female cyclists from the Beehive State were second and third in Marci Kimball (Salt Lake City) and Heidi Madsen (Layton) with times of 9:50:36 and 9:52:20, respectively.

“It was a great day,” said Drew Neilson, the Logan Race Club (LRC) president. “It was a safe day as far as I know. It was pretty smooth and the temperature was perfect. We dodged the rain.”

But not the wind.

No one seemed to want to attack on the first big climb of the day over Emigration Canyon outside of Preston. Usually, that can be a difference maker.

“The wind up the climbs made people think twice about attacking,” said Neilson, who rode LoToJa for the 16th time. “Last year going across Star Valley we averaged 35-38 (miles per hour) with some tailwind. This year we were at about 31 (miles per hour). We had a good group that was working together, but the crosswind made it more difficult.”

There are different groups that leave Logan every three minutes. Neilson and more than 10 LRC riders were in the group that included 35+A and 45+A. Some years that top times have come from these riders.

“Our goal is to get as many LRC riders to the top of their category,” Neilson said. “You can roll the dice or work as a team. The LRC is great in how riders work for each other.”

Kirk Eck, a multiple-times winner of LoToJa, and Greg Roper were in the group with Neilson and attacked around Franklin. One other rider joined them. Neilson said they hoped they would get away, but then others in the main group started working to pull them back.

“We were hoping Kirk and Greg would have a four- to five-minute lead by Preston, but some others got organized and started chasing them down,” Neilson said. “They were only ahead by a minute and a half by Preston and were caught by Mink Creek. Kirk and Greg burned some matches early.”

And it cost the veterans, who slipped down in the final results. But Neilson praised them both, especially Eck: “Kirk is amazing. He and Greg almost made it. Kirk is fun to be with and elevates those around him. Everyone knows him. It’s fun to feel you are riding with a rock star.

“... The beauty of riding with a team is it forces others to do some work early.”

Because of the wind over Emigration Canyon, a larger group than normal made it up and over together. On the second big climb over Geneva Summit, Neilson, Joe Camire and Mike Twohig were part of a group that attacked and got up and over. However, they were bridged by some other riders before the final climb over Salt River Pass — the tallest of the three.

The trio of LRC riders were part of a group of seven that made it up and over Salt River Pass first. They were joined by five more by the time they reached Afton, Wyoming, but lost a cyclist by Alpine, Wyoming. Eleven riders in that 35+ and 45+group rode the rest of the way to Jackson.

About 12 miles from the finish, Neilson made plans with Camire, who is a better sprinter. Neilson started making half-hearted attacks repeatedly to test the rest of the group and wear them out some, while Camire sat on and didn’t work to chase after his teammate.

With less than two miles to go, Neilson made what he called a “hard attack.” Another rider countered, and Camire made his move. Camire was able to win the sprint and finish first in the 45+A category with a time of 9:01:58. Neilson was third in 9:02:00. Twohig was second in the 35+A group in 9:01:59. The LRC trio placed 19th, 21st and 23rd in the overall standings, respectively.

“I was super happy with how the LRC did,” Neilson said. “The Logan Race Club races well. All in all, it was a great day.”

There were two females from the valley that did well in the Cat 45 Cat 5. Camille Stringham of River Heights won that category in 10:12:19, while Laura Hawley of Providence was second in 10:12:22.

There were 806 riders in the competitive categories and 918 in the cyclosportive, which some call the “for fun riders.”